Everything You Need To Know About Kombucha

Kombucha has been around for years but has recently gained a lot of traction as a soft drink replacement due to some clever marketing that pits it as a low-sugar tonic that can heal all sorts of maladies. It’s taking up more and more space in the drinks aisle at the supermarket as consumers clamour for options outside the traditional high-sugar drinks and anything that seems remotely healthy.

But is kombucha actually as good for you as some may claim?

Kombucha is a sweet, fizzy tea produced by fermenting sugared black or green tea with bacteria and yeast. The bacteria and yeast are contained together in a culture known as a 'SCOBY' (Symbiotic Colony Of Bacteria and Yeast) which forms a spongy, gelatinous biofilm in the tea. The yeast go to work by turning sugars present in the tea into alcohol and the bacteria then feed on that alcohol to convert it to acids. The species of yeast and bacteria used differs greatly through different preparations, but the end goal is the same - they work in unison to create a light, effervescent drink similar to, say, sparkling apple cider.

What Are The Health Benefits Of Kombucha?

As Kombucha consumption has increased, so has the research around kombucha and its potential beneficial health effects. Often marketed as 'probiotic', a huge list of purported health benefits exist. These include reduction of inflammation, reduction of bloating, improvement of blood pressure, 'detoxifying' the blood, relieving asthma and even preventing or treating illnesses such as cancer, cardiovascular disease and diabetes. It's a hefty list of positives to live up to and, for the most part, the scientific evidence to back up these claims remains scant.

The idea that kombucha may provide a range of health benefits comes from its preparation. Certain strains of bacteria and yeast may confer a benefit to the host, which is where the term 'probiotic' comes from — the idea that microorganisms can improve health, especially in areas like the gut.

This extends to the kombucha formulation itself, which contains a wide variety of organic acids such as glucoronic and gluconic acid, L-lactic acid and acetic acid, depending on the bacteria used. These acids may have the ability to provide a protective effect in the body, but there doesn't exist enough evidence to conclusively demonstrate kombucha consumption can produce this.

Most marketing spiels on kombucha also mention antioxidants - the polyphenols that come from the tea that is used when brewing kombucha. The idea is that antioxidants can counter harmful free radicals that are known to play havoc in the body. However, there still remains question marks over the effect of antioxidants on conferring any real health benefits in the human body.

Most studies on Kombucha, according to a recent review, have previously been carried out using rodent models and cell culture. The review lists no studies on the effects of kombucha on humans. In an ideal world, studying the effects of kombucha in humans would allow for a better understanding of its health benefits, but there is likely little that can be gleaned from such research.

As kombucha cultures vary so wildly all over the world, the results in one study may not necessarily line up with those elsewhere. This variation in the SCOBY cultures means that further research is necessary to fully elucidate just how kombucha may promote health.

One thing that shouldn't be discounted off-hand is its sugar content. As a 'soft drink' with a light fizz, kombucha may be a suitable way to cut back on sugar intake without jumping straight to water. Sugar content can vary greatly (again, due to the formulation of the cultures used) but in most recipes, the sugar content will be drastically reduced when compared to drinks like Coca Cola or Pepsi.

Is Kombucha Bad For You?

Food Standards Australian and New Zealand (FSANZ) considers kombucha a traditional food that does not require safety assessment. However, kombucha is produced with cultures of bacteria and yeast and the opportunity for harmful organisms to grow within the tea should not be discounted. This is particularly relevant for those that may homebrew the tea.

In 1995, the Centre for Disease Control and Prevention (CDC) in the US reported that two women from Iowa fell ill after drinking kombucha tea. Subsequently, one of the women passed away. While no firm conclusions were drawn linking the tea to the illness, the CDC suggested that the kombucha may have been responsible for the illnesses and that in this case, the kombucha had been allowed to ferment for a lot longer than usual. There have been several reports since detailing various illnesses potentially associated with drinking the tea.

A more recent case report found that kombucha was likely to blame for a 54-year old woman suffering from severe metabolic lactic acidosis. The woman had brewed her own Kombucha tea for many months and then reported to the hospital with the condition. No other cause was found for her illness, so the suggestion was that the kombucha tea may have contributed to her presenting in the clinic.

Theses case highlights one area of brewing kombucha tea that may be dangerous. When working with microorganisms, the potential for contamination is high and any organisms that grow within the tea are not necessarily beneficial. The same precautions should be adhered to when preparing and cooking meat - there's a whole, invisible micro-world on your fingertips and its residents are not concerned about your health, they are concerned with surviving.

Can I Brew My Own Kombucha?

Of course! Kombucha is still considered 'safe' and if you enjoy the taste of fermented tea you've bought from a store, there's no reason you can't make your own. Lifehacker US provided a handy guide below: 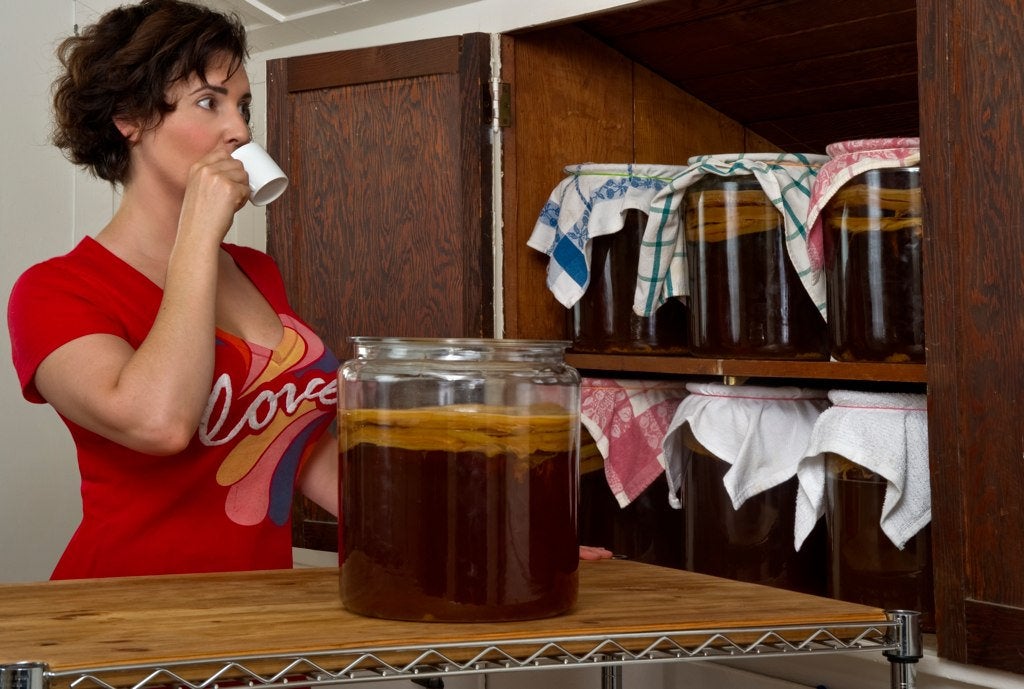 How To Safely Brew Your Own Kombucha

Kombucha is a fermented tea that people enjoy for the taste, but also for probiotic benefits that can support healthier digestion. It's so popular that many kombucha lovers go the homebrew route to customise their own. The problem, though, is that when brewed incorrectly it can be a serious food safety risk.

That seems to be ... highly subjective.

Tonicka Kombucha is a health tonic made from fermented fungus and "beneficial" bacteria. We recently tried a bottle only to discover it tastes about as good as it sounds. Here is the video proof.

5 Simple Ways To Pay Less On Your Mortgage

Steph Panecasio 20 Feb 2020 3:45 PM
When you first start paying off a mortgage, the payments can feel overwhelming. There's a big fat number you're incrementally decreasing and although you've got a (long) timeline of payments to keep you on track, the end feels miles away.