How To Win At McDonald’s Monopoly

Macca’s Monopoly is back until October 17 and with a $276 million prize-pool, there are plenty of reasons to get involved. We’ve collected all the information you need right here, from the cheapest way to load up on tickets to all the free food on offer!

To play the Monopoly game this year, you can download the “Monopoly Game at Macca’s” App, which is a separate app to the mymacca’s ordering App. It’s available on either iOS or Android. To obtain game tickets, you need to purchase eligible products from McDonald’s which will result in either an Instant Win message, a Collect To Win message or a Chance Card message.

Macca’s advertise the odds of winning prizes as 1 in 5, a 20 per cent chance. The maximum number of tickets that will be distributed during the promotion is a staggering 154,278,834.

You will also need to obtain a game board if you are going the Collect To Win route, which you can find in the app, grab in store or print from here.

A maximum of 12,000,000 Chance Card tickets will be distributed. The odds of getting a chance card are 8%. If you get a Chance Card ticket, then you will need to scan it into the app or enter the unique authentication code, which will give you another 1-in-5 chance of winning a prize or nabbing a Collect To Win ticket.

This video shows you how to make bona fide KFC chicken at home. (The good news is, you probably have most of the ingredients in your cupboard already.)”]

The Cheapest Way To Get Monopoly Tickets

The cheapest way to get a single ticket is to buy one hash brown for $2.15. However, from a value point of view, you can get two tickets for a minimum of $3.15 – the cost of a serving of large fries.

However, to maximise your tickets for the cheapest price, the best thing to do is use the mymacca’s app, which has 25% off all orders over $10 until the end of the promotional period on October 17. Thus, if you purchase four servings of large fries for $12.60 and apply the discount, you can get eight tickets for $9.45. 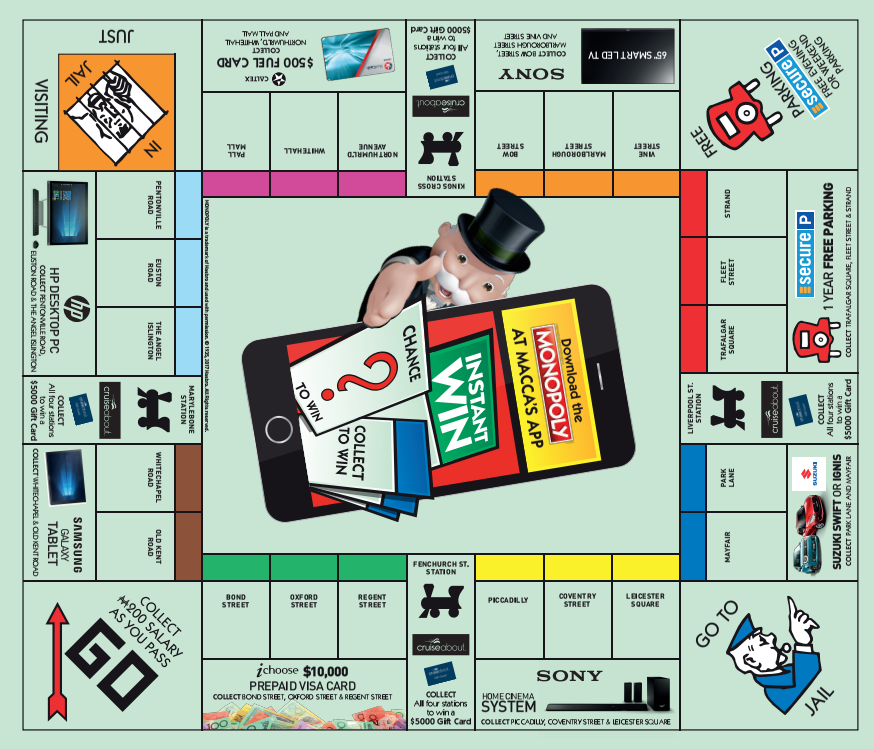 This year’s Collect-To-Win prizes feature cars, home cinema systems, free parking and TVs. To redeem these rewards you have to collect the corresponding properties on the Monopoly board, pictured above. Like a regular game of Monopoly, the best properties (at least, the best value properties) are the Dark Blue “Mayfair” and “Park Lane”. If you collect both of these tickets, then you’ve just scored yourself a brand new car. Unlike regular Monopoly however, there are some pretty decent prizes on offer, even at the start of the game board! The full list is below.

Of the property tickets listed above, not all are available in equal amounts. It seems that for each colour on the game board, there is at least one property that is a rare find. The rarest tickets seem to be Piccadilly, Park Lane, Fleet Street, Marlborough Street, Regent Street, Euston Road, Whitehall, Fenchurch St Station and Old Kent Road. I reached out to McDonald’s to see just how likely it would be that you might run into one of these tickets but haven’t had a response yet.

If you’re looking for a specific ticket, it’s a good idea to head to auction sites like eBay or Gumtree and investigate. You may also find that some people are willing to sell their instant win items. For instance, a Gumtree user is offering their 12 months of free parking (valued at $7800) for $5000. Similarly, you will find many listings for wanted tickets.

On the other hand, if you’ve lucked into a rare instant win ticket but are looking to make some quick cash or trade for another ticket I’d look at offloading the tickets. At present, eBay has over 234 listings under ‘McDonald’s Monopoly’ with various instant win tickets and unused chance cards available to purchase in bulk. This is a cost-effective way to get a large amount of tickets, but you’ll have to wait for them to be posted.

However, the official rules of the game state:

A Ticket cannot be transferred by the Entrant who purchased the Eligible Product, to any other person, whether by gift, sale, trade, barter, auction or otherwise by ‘transferring to another’, and whether the transaction was initiated privately or in a public forum, including but not limited to via online auction or purchase sites (for example eBay and Gumtree) or used for any other purpose. Such online auction or purchase sites may not permit the sale of lottery tickets on their sites and also generally prohibit their users from infringing any laws, third party rights or the policies of the site itself.

Be wary that these sales can void your tickets. 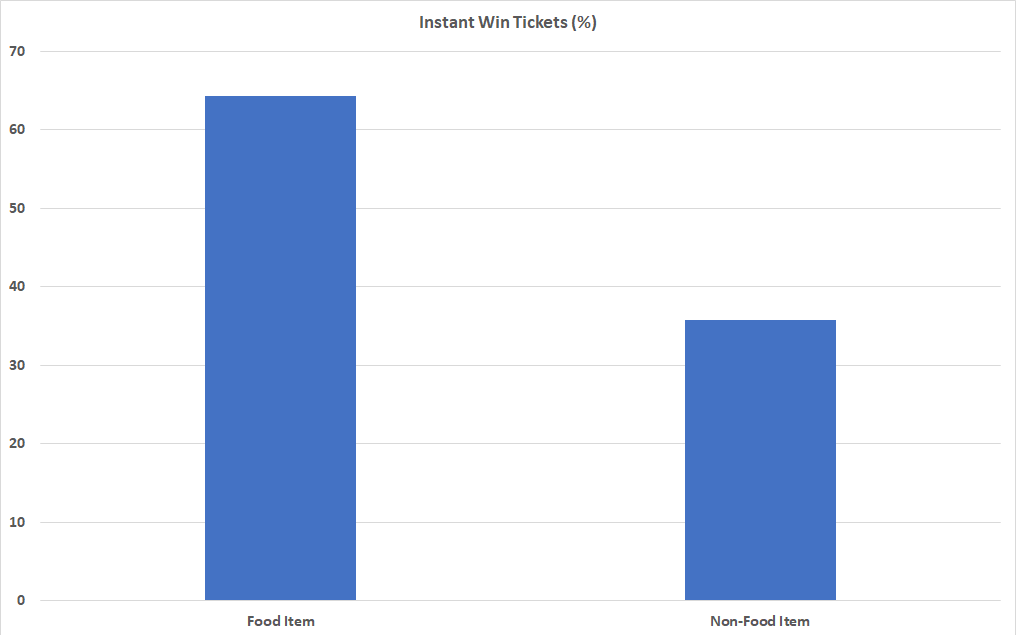 There are nine different ‘Instant Win’ tickets that reward you with free menu items. Across the app and the physical tickets you can collect in store, there are a total of 24,736,289 items on offer. Of those, the most likely reward you will receive a Small Fries of Fruit Bag, which accounts for 28% of all the available free food options. The least likely reward are free Sausage McMuffins, Ham and Cheese Pockets, Bacon’n’Egg McMuffins and Sausage’n’Egg McMuffins, which only make up 4% of the free food Instant Win tickets.

There is an absolutely mammoth number of non-food items that you can instantly win too, from car rental discounts to mobile phones, laptops, music downloads and all the way up to big ticket items like a brand new car and home entertainment systems. Of course, there are far fewer of these prizes available, so the odds of landing one of the big ticket items is much lower – but there are still some non-food items like sports lessons, $10 off activities like paintball and bowling and shopping vouchers.

How McDonald's Australia Will Change Under Its 'Turnaround Plan'

Globally, McDonald's is bleeding customers like a McOz bleeds beetroot juice. US McHeadquarters has just announced plans for a massive corporate restructuring, but how will that impact Macca's down under? Here's what you need to know as a fast food junkie or occasional McMuffin consumer.