Is It Possible To Win Big At McDonald’s Monopoly? 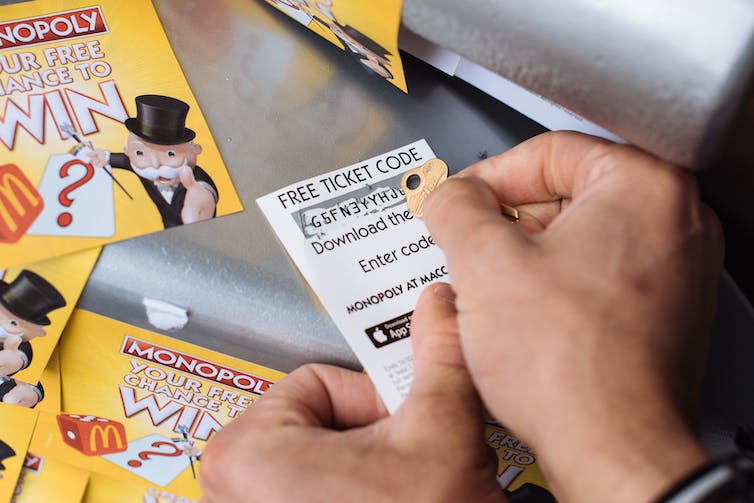 The code that could see you a winner in McDonald’s Monopoly competition. Paul McMillan

McDonald’s Monopoly competition is back this month offering a chance to win expensive prizes, all for the price of a Big Mac. Given you could become tens of thousands of dollars richer by simply going on a Macca’s run, McDonald’s Monopoly games have in the past been subject to cheating and a multimillion-dollar scandal.

But for those who prefer to play fair, what are your chances of actually snaring a prize?

To take part you need to buy certain McDonald’s food items that include peel-off Monopoly tickets. Each ticket has three different possible outcomes: an “Instant win”, a “Chance card” or a “Collect to win”.

Instant prizes are either a McDonald’s food item such as a burger, or a non-food prize such as a movie ticket or a cash gift card, redeemed by entering the 12-digit code on the ticket into a phone app.

A “Chance card” ticket also provides a 12-digit code which, when entered into an app, provides another opportunity to nab an instant prize or a digital “Collect to win” ticket.

For obvious reasons, McDonald’s doesn’t tell us much about how these tickets are distributed across Australia. But what it does tell us is the maximum number of prizes that can be awarded for each prize type.

Using some fairly basic number-crunching, we can get a better picture of what our chances are of winning a shiny new car just by purchasing a Big Mac meal.

How To Win At McDonald's Monopoly

Macca’s Monopoly is back until October 17 and with a $276 million prize-pool, there are plenty of reasons to get involved. We’ve collected all the information you need right here, from the cheapest way to load up on tickets to all the free food on offer!

What the numbers reveal

This year, McDonald’s says 136,634,083 tickets will be distributed across the fastfood giant’s restaurants, and lists the maximum number of prizes available.

While we have no way of determining whether or not this maximum is reached, we can still get a general idea of our chances of winning a prize by using these values.

McDonald’s says there is a one-in-five chance of winning an instant prize, which could either be a food prize or a non-food prize.

Of course, 13.2% plus 8.7% gives a 21.9% chance of winning an instant prize, on average, which roughly agrees with the one-in-five that McDonald’s claims.

McDonald’s simply promises an average rate of an instant win, owing to the fact that about 20% of physical tickets include a prize of some sort.

McDonald’s says one in five, or 20%, of Chance tickets will result in an instant win. Working the numbers means you have a 0.5% chance of obtaining a Chance ticket that will also get you a prize, so it’s not a strategy you should be banking on.

While we know how many “Instant win” and “Chance” tickets there are, the details around the “Collect to win” part of the McDonald’s Monopoly game are more closely guarded.

Going by previous observations, it seems that for each “Collect to win” ticket colour, all but one of each set will likely by very commonly distributed. The final one, not so common.

In this year’s game there are two prizes available of a year of free fuel by collecting the three red tickets: The Strand, Fleet Street and Trafalgar Square.

So it’s entirely possible that the probability of finding that final red ticket in the set could be as low as 2 in 136 million.

If you are planning on trying to win one of the major “Collect to win” prizes, these are the odds we think you should be expecting, even if you have collected all but one of the tickets needed, based on the number of prizes avaailable:

Six Deals You Need To Know About In Australia Today

Can you hack the app?

Given each ticket has a 12-digit code you can enter into the app to see if you’ve won a prize, a cheeky idea might be to enter random codes to see if you can guess a winning number.

There are several reasons why this is a waste of time (not least the fact that you need to present a physical copy of a ticket to collect a prize), but let’s also get some mathematical perspective.

Every ticket code consists of a combination of letters and numbers. There are 9 possible numbers (1-9, ignoring 0 so as not to confuse with the letter O) and 26 possible letters (A-Z, capitals only) that can appear in a ticket code.

This means there are 35 possibilities for each of the 12 alphanumeric characters in a code. So how many possible 12-character codes are there? We can calculate that with:

So the probability of entering a random 12-digit code into the app and having it recognised as a valid ticket code is given by:

A number this small is hard to imagine, so let’s think of it another way. If you wanted to increases your chance of randomly picking a valid ticket code to roughly 4% (still a very slim chance!), you should be prepared to pick about 1011, or 100 billion random 12-character codes first.

If we assume that picking, entering and checking a code into the app only took you one second, then entering a hundred billion codes would take you about 3,180 years. The competition ends next month.

Incidentally, this is one of the reasons why websites and email services encourage you to choose passwords that are at least eight characters long, with a mixture of numbers, letters and special characters. It takes a long time for people with nefarious intentions to guess your password if it’s as long as a McDonald’s Monopoly ticket code, even if they get a computer to help them.

So what’s the best way to play?

If you remember that McDonald’s Monopoly is much like a regular lottery, you’ll be better off as you can relax and know that there’s next to no chance that you will win a major prize.

The instant win aspect is a nice bonus if you’re already planning on having a meal at McDonald’s, since it’s not all that unlikely that you could end up with some extra fries or a drink.