How To Use Function Keys In Windows On A New MacBook

Running Windows on your MacBook isn’t uncommon, but running it on a new Touch Bar MacBook Pro has its own set of challenges thanks to the removal of the function keys. Luckily, a trip through your MacBook’s settings can bring those precious keys back when using Windows 10, either virtually or natively.

The Touch Bar MacBook Pro ditches the traditional function keys in favour of its set of system adjustments such as brightness and volume, leaving Windows users without some important keys they will need to use their OS. Function keys that enable convenient features such as instant browser refreshing or screenshotting pages are lost unless you hold down the “fn” key on your keyboard.

If you’re running Windows 10 through Parallels (or any virtual machine app) on your MacBook, you can make some simple settings modifications in your keyboard settings to enable function keys in the app, or any virtualised Windows app. 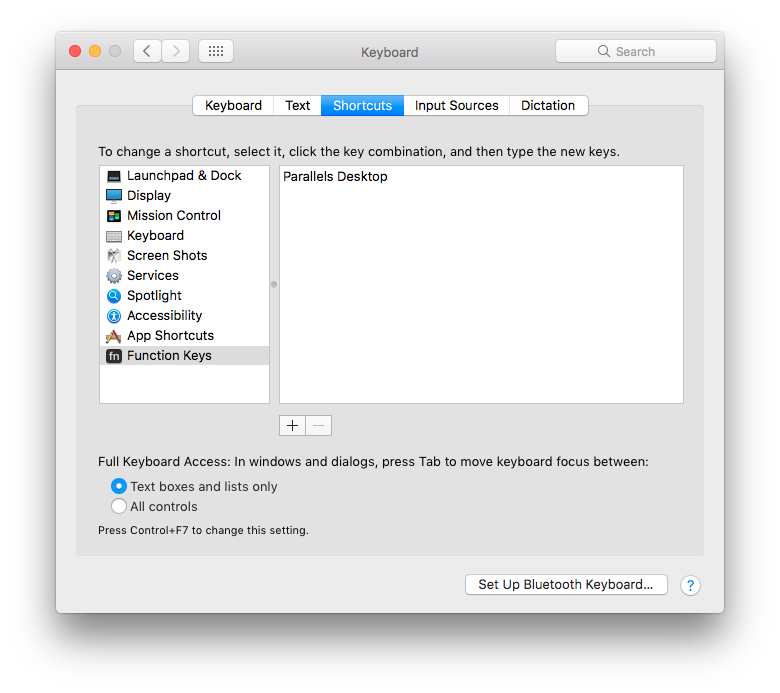 Head to your MacBook’s System Preferences, select Keyboard, then select Shortcuts. From there, choose the Function Keys section and hit the + button. You can add Parallels to the list of apps that pull up the function menu. You can even choose particular virtualised apps, configuring the keys on a per app basis if you know which ones depend on having them around.

Dual-booting your machine with Apple’s Boot Camp will let you run Windows as normal, but still restrict Touchbar support to Apple’s default adjustment options. Windows does recognise the Touchbar itself, but apps don’t support it, rendering it a set of static but usable adjustment keys.

To regain your precious function keys, you’ll have to take a trip to Apple’s Boot Camp Control Panel. From there, select Keyboard, then check “Use all F1, F2, etc. keys as standard function keys.” That will switch the Touchbar’s default setting to the function keys, though you can access the convenient brightness and volume buttons by holding the “fn” key on the bottom left of your keyboard.