How To Repurpose Fruit Skin Into Salt And Sugar 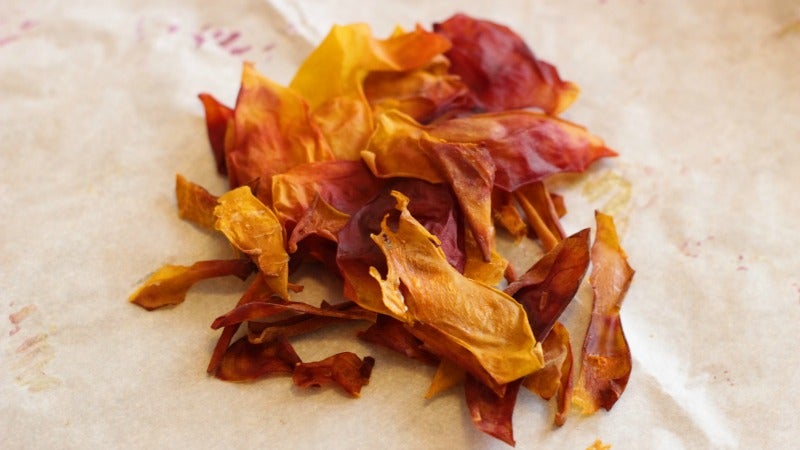 I'm a big fan of repurposing seemingly useless scraps into something surprisingly delicious, which is why I was extremely pleased to stumble upon these recipes for tomato skin salt and peach skin sugar on Food52.

Both tomato skins and peach peels initially seem like a dead-end scrap. They're flimsy, seemingly lacking in flavour, and kind of weird, texturally speaking. Drying them out and concentrating their flavour for use in a tasty powder seemed like almost too good of a solution, and I knew both of these recipes were something I needed to taste to believe. 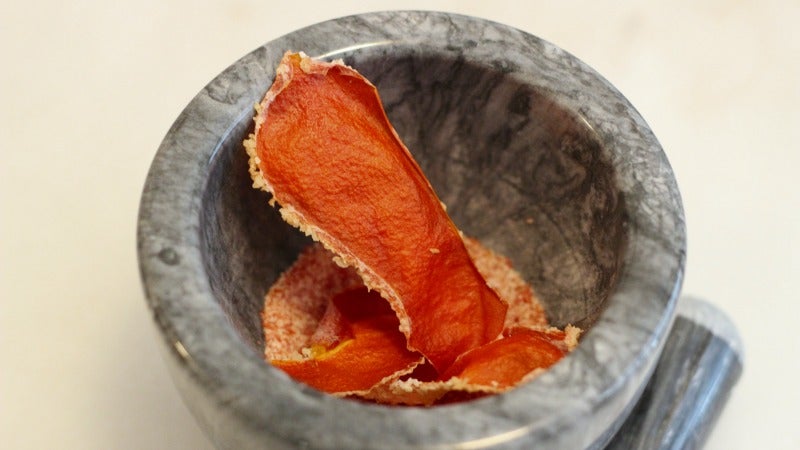 This idea is the brain child of Gabrielle Hamilton, and can be found among many other treasures in her cookbook Prune. Tomato skins are one of those scraps I'd never given a second thought to, and I never felt particularly bad about it. They're such a small part of the tomato, and tossing them didn't seem like that big of a deal, but I now regret every bit of tomato skin I have ever cast aside, so good is this salt. 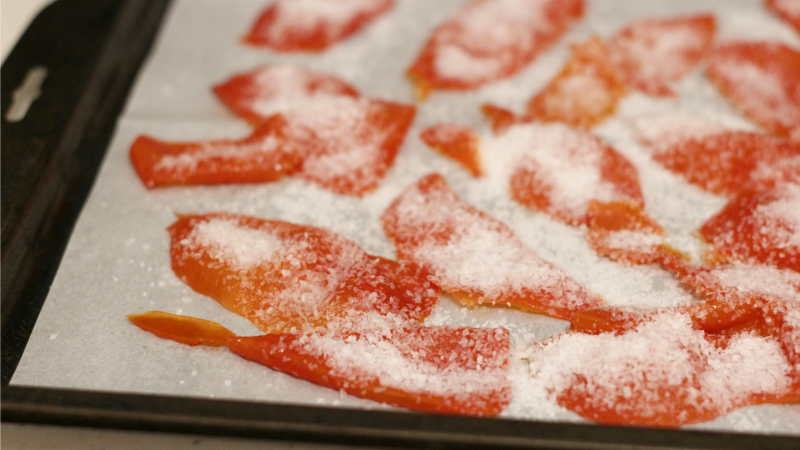 The process of turning the red skins into a pretty pink salt is an easy one, but first you have to peel them off the tomato, which is also not that hard if you know how to do it. Just take a pairing knife and make a small "x" on the bottom of the fruit, and dunk it in boiling water for about 30 seconds. Once you see the peel start to pull away slightly from the rest of the fruit, plunge the tomato into ice water until it's cool enough to handle. The skins will slide right off, and will be ready for their salty transformation. Weigh the skins, lay them out on a baking paper-lined baking tray, and sprinkle an equal amount of salt by weight on top. 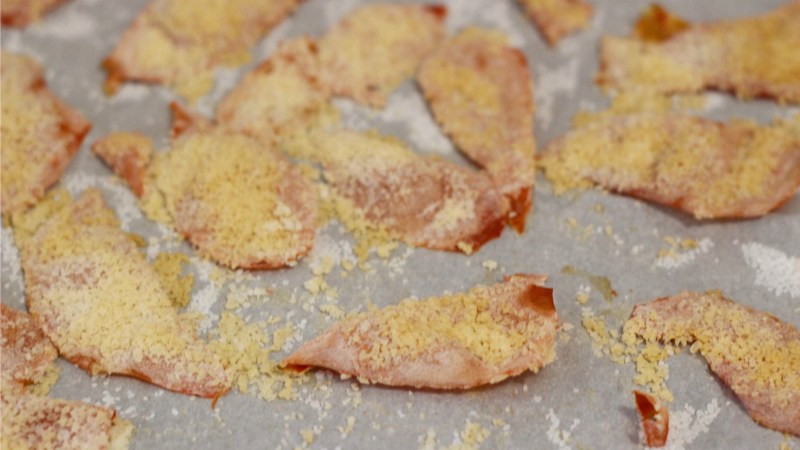 Set them in a 93C oven for a couple of hours and, when they're nice and dry and crisp, pound 'em up with your handy-dandy mortar and pestle. (You could use a small food processor or spice grinder, but you won't get as fine a powder.) 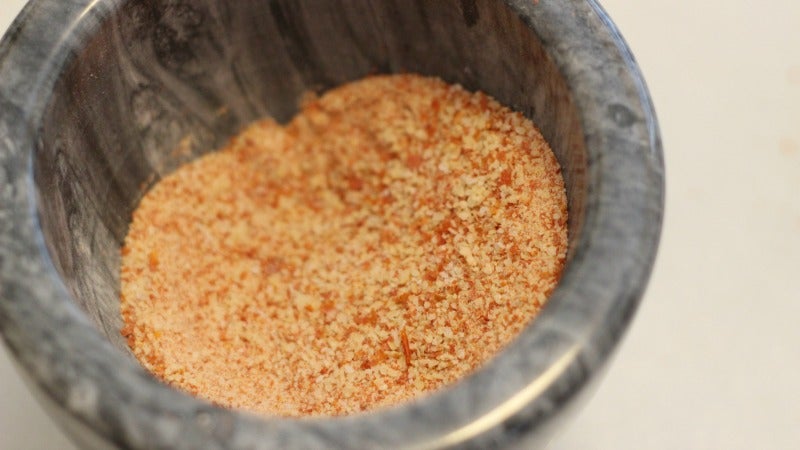 I'm pretty obsessed with this stuff. So far I've sprinkled it on scrambled eggs, popcorn and a rice cake with cream cheese, and so far it has added both sodium and bright, fresh flavour with a hint of umami. This unexpected development has transformed the red peels from "worm food" into precious commodities. 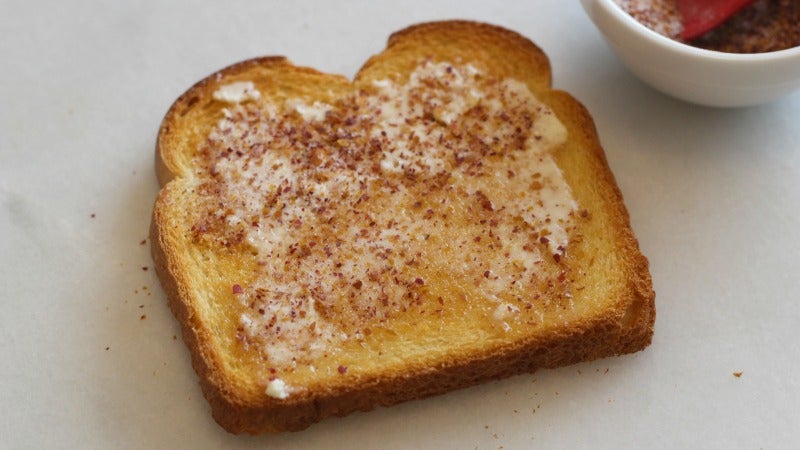 If you like baking peach pies, or are one of those people who just doesn't like the feel of fuzz on your tongue, this tip is also applicable to your life. 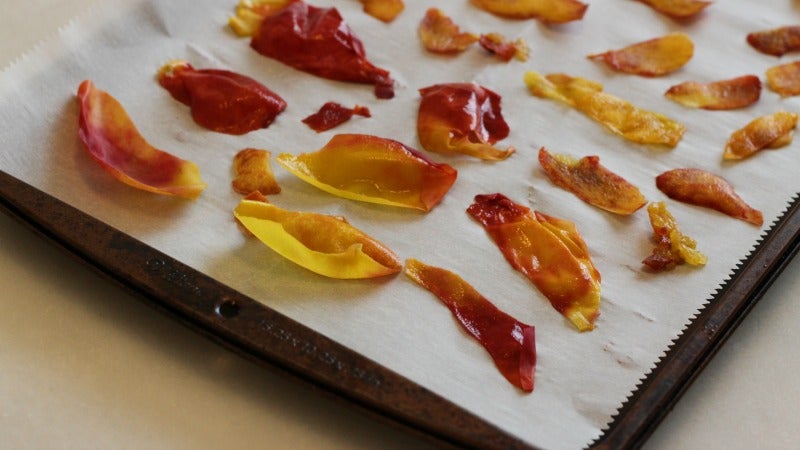 This recipe was originally developed by a Food52 reader, Rhonda35, and it's as tasty as it is pretty. The process is very similar to the tomato salt procedure — you even peel them the same way — with a few tweaks. Unlike the tomato skins, the peach skins are dried before they're mixed with the sugar, but they're dried for the same amount of time at the same temperature.

Once dry, Rhonda ground the peels, measured them by volume, and ground them with an equal amount of sugar. I added a little more sugar — about 25 per cent more by volume — to mine to stretch the peels a bit further, and the result was a peachy, super-delicious sugar perfect for sprinkling on all sorts of sweet treats. I've put it on toast, oatmeal and (again) a rice cake with cream cheese, and it made each food thing taste decidedly spring-y (as in the season). I'm not done though, and plan to shake it all over sugar cookies, ice cream and crumbly cobbler toppings. (I also plan to try this with every stone fruit skin I can get my hands on, be they plum, nectarine or apricots.)