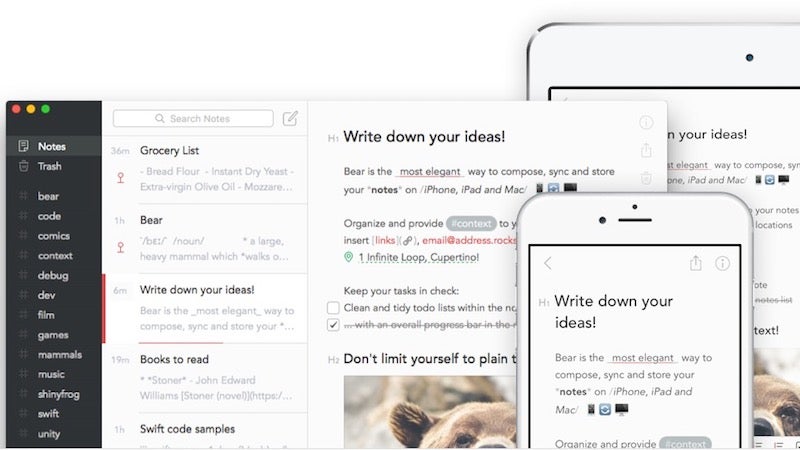 iOS/Mac: There's certainly no shortage of notes app out there, but Bear's an app that manages to toe the line between a few different popular styles, and might suit you if you need more features than plain text offers, but not as much as something like Evernote.

From a features perspective, Bear looks a lot like the recently reinvigorated Apple Notes. You organise notes in Bear using hashtags, can pin notes to the top of your list and it supports in-line images. Bear's also geared toward coders with a markup editor that supports a number of different programming languages. As a whole, Bear supports basic Markdown for formatting text, but can also automatically format stuff like links and addresses. There's even a whole system for linking notes together.

What makes Bear a little different is its ability to work as a long-form writing tool too. It has a focus mode that hides all the cruft and just gives you a text editor to write with, and it supports exporting to PDF, HTML and DOC when you're all done. Because of this, it manages to work for both jotting down quick ideas or to-dos, or doing more complicated writing.

Bear is free on either Mac or iOS, but if you want to sync between your devices, you'll need to shell out $21.49/year for a subscription. Still, the fact you can check it out without paying anything makes it worth a look if you need something more than Apple Notes, but don't want to go all in with something like OneNote or Evernote.