Google’s new Google Assistant appeared in every part of the company’s hardware event yesterday. Google was less clear about how Assistant differs from Google Now, or Now On Tap, or Google’s voice commands. To clear things up, here are some of Assistant’s best new features, and how it fits into your Google life. Right now, the only way to try out Assistant is as a chatbot in Google Allo. Google also announced that some features that won’t arrive until devices like Google Home or the Pixel phone arrive. Not every feature is available on every device, but there’s a lot of promising stuff on the way.

Control Google Cast and Other Devices With Voice Commands To people with an Amazon Echo, controlling your lights or thermostat with a voice command may not seem all that new. However, Google Assistant brings the Chromecast, and any other Google Cast-enabled devices, into the fold. With Assistant, you’ll be able to say, “Play Luke Cage,” for example. Google will automatically figure out that you want to play the show Luke Cage, through the app Netflix, on the Chromecast that’s on your Wi-Fi network.

It’s unclear just yet how this will work if you have multiple Google Cast devices. So far, we know this feature will be enabled in Google Home (which Australia isn’t getting), but hopefully it will at least come to the Pixel phone as well.

Google Assistant will also be able to control smart home devices like those from Nest, Samsung SmartThings and Philips Hue. Those are just the partners that Google announced at launch, but presumably more will follow. Once again, it’s unclear if Google will let you control these devices from your phone, or just the Google Home speaker, but both would be amazing. 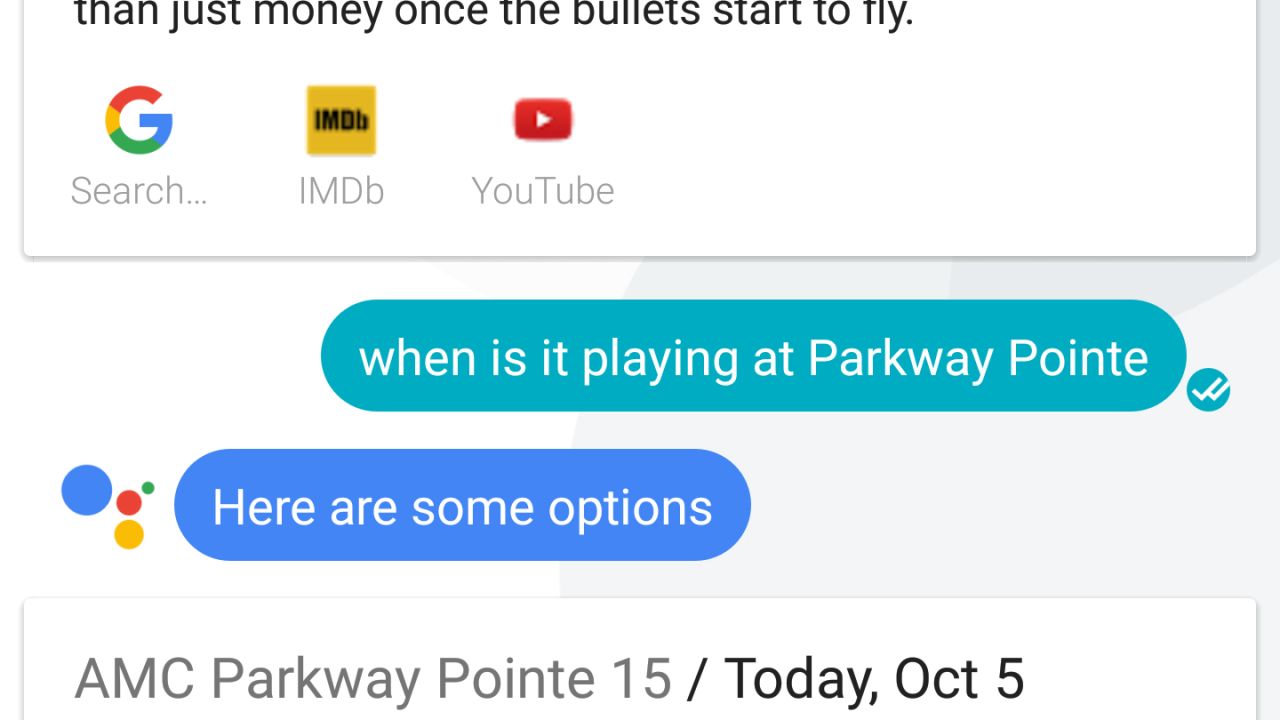 Google touts the ability to “have a conversation” with Google Assistant, like all anyone wants is a deeper relationship with their phone. However, when you actually use it, it becomes clear just how much better being able to ask follow up questions makes the experience. To demonstrate this, I tried out one of Google’s favourite examples that I never actually use: Finding movie showtimes.

If I already know what movie I want to watch, I can just search whatever app I’m going to use to find tickets directly. Google’s useless to me here. However, if I’m curious what’s out, I can ask Assistant, “What’s playing?” In Allo, this shows me a list of movies playing in my area. The Magnificent Seven looks OK. I tap it to get some information and reviews. I decide it’s worth a shot, so I go back to my Allo conversation and say “Showtimes” to find out where it’s playing near me. Except it only shows me the theatres closest to me. I prefer another AMC that’s about halfway between me and my friends. So I ask again, “Showtimes at Parkway Pointe.”

Though I’m now several commands into this conversation and even left the app for a bit, Google still knows I’m asking about The Magnificent Seven. In fact, the only flaw left with the system is that Google will only offer to let me order tickets through Fandango (which we’ll come back to). Previously, you had to have a pretty good idea of what you wanted to find for a lot of Google’s cooler features to really be useful. Now that you can ask follow up questions and have a real conversation, a lot of queries will get a lot easier. 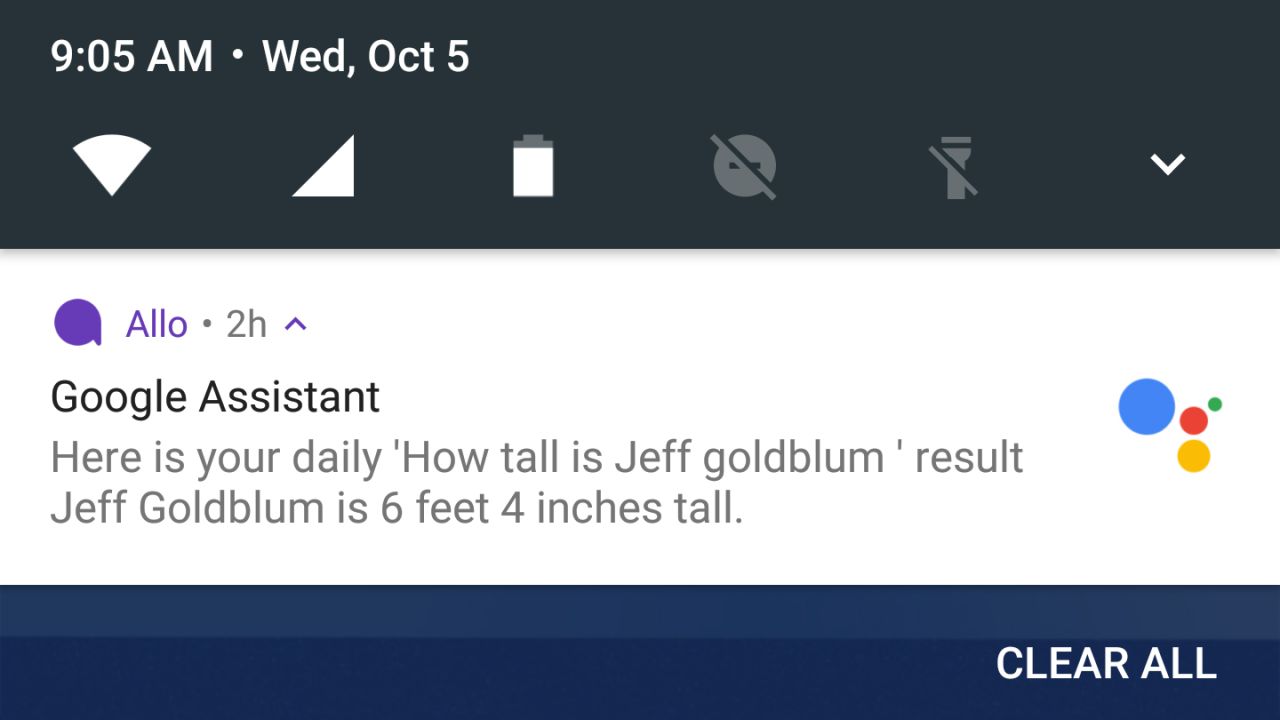 Google Now can already guess that you might want to see the weather and maybe a few stock prices every day. With Google Assistant, you can get that kind of recurring information for anything by following up a search with, “Send me daily.” Want a daily update with all the US presidential news? You got it. Need to know the current exchange rate between Australian dollars and British pounds every morning? Google Assistant can totally do that.

When I say “anything” I really mean anything. In Google Allo, I asked Assistant, “How tall is Jeff Goldblum?” To which it naturally replied, “Six feet four inches.” I then set up a subscription for that request to occur every morning at 7:00AM. This morning, I got a notification from Allo letting me know that, indeed, Jeff Goldblum is still six feet four inches tall. Presumably, this implies that Google will let you set a subscription for nearly anything. We’ll see just how complex those scheduled commands can be when Assistant breaks out of Allo later this year. It’s possible that in the near future, you’ll be able to schedule a request for a taxi every morning, or mute your phone every night simply by setting up a “subscription” to certain Google Assistant commands.

Send Commands Offline and Get An Answer Later 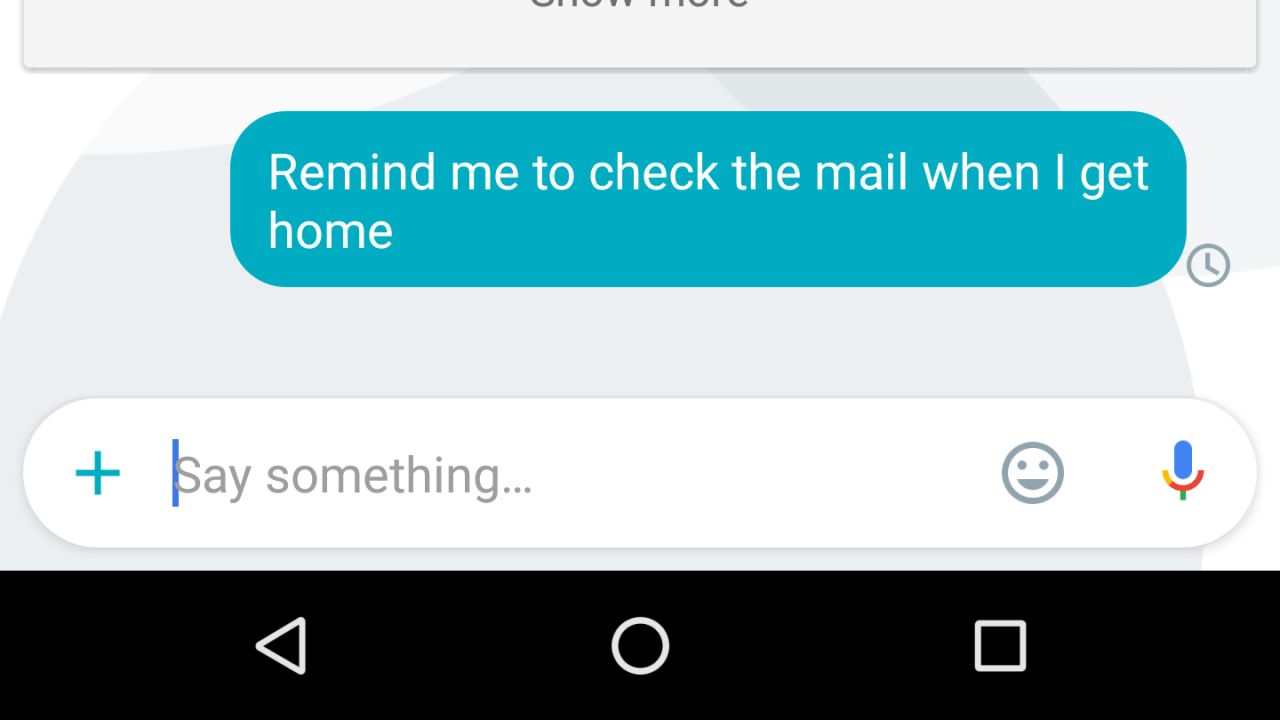 When you lose your internet connection, Google’s voice commands suddenly become useless. Google can’t even transcribe your commands, much less find out how tall Jeff Goldblum is. Assistant, on the other hand, will be able to save your commands and send them when you get your connection back.

This works best in Allo where you can type your commands, since most voice transcription doesn’t work without an internet connection. Simply type your command and the next time you have a connection, you’ll get your answer. If you leave the app, Allo will even push a notification to let you know that it reconnected and it found your answer. This can be super handy when you need to set a reminder on the train before you forget, for example. Some Google voice commands already work without an internet connection, so this isn’t totally new, but it’s a nice safety net to have when your connection gets fussy.

Google Search has a strange relationship with third-parties. You can get information from Wikipedia, IMDb, Fandango and a million other services, but you can’t always interact with them. For example, if you ask Google to call you a taxi now, it will give you links to Uber, but it can’t get you a ride directly. That will change in December when Google launches its Actions on Google platform.

This platform will let third-parties add voice actions to Google Assistant. These can either be “direct actions” which are simple requests like, “How tall is Jeff Goldblum?” or complex, conversational ones. Google demonstrated this yesterday by showing how hailing an Uber would work. You can simply say, “I need an Uber,” Google will connect you to the Uber chatbot which asks you where you’re headed, you give it an address, pick what type of taxi you need and Uber will handle the rest.

Since these will be built on Google Assistant, instead of just on one device, they will be able to adapt to whatever device you’re using. You can tap suggested replies to Assistant in Allo, or you can speak your commands to Google Home. As we stated before, you can also pause your conversations and come back to them later. Say you’ve already told Uber where you need to be picked up, but you need to ask your party if you need an UberX or an Uber XL. Google will wait while you figure it out. No more trying to memorise a long, complicated voice command to get it in one go.

One of Assistant’s accidental best features is that the Google Now name is essentially dead. While the company hasn’t exactly given a straight answer about how Google Now will live on after Assistant rolls out, Android Police discovered that virtually every reference to Google Now and Google Now On Tap have been removed in the latest Google beta. Which is fine by us, since Google Now was an awful name to begin with that’s only gotten more confusing over time. Assistant makes much more sense as an umbrella term for the company’s smart features.