Google Now On Tap Is Cool, But It’s Not That Useful Yet

Google’s new Now On Tap feature was easily one of the coolest new features of Android Marshmallow. Now that it’s out, we decided to give it a whirl and see how it worked. The result: Google still has a long way to go.

Now On Tap was first announced at Google I/O earlier this year. The idea is pretty awesome: with the press of a button, you can summon Google to your screen to intelligently figure out what information you need or what you want to do. After using it for a little over a week, however, it seems like it could still use some fine-tuning.

The Promise of Now On Tap 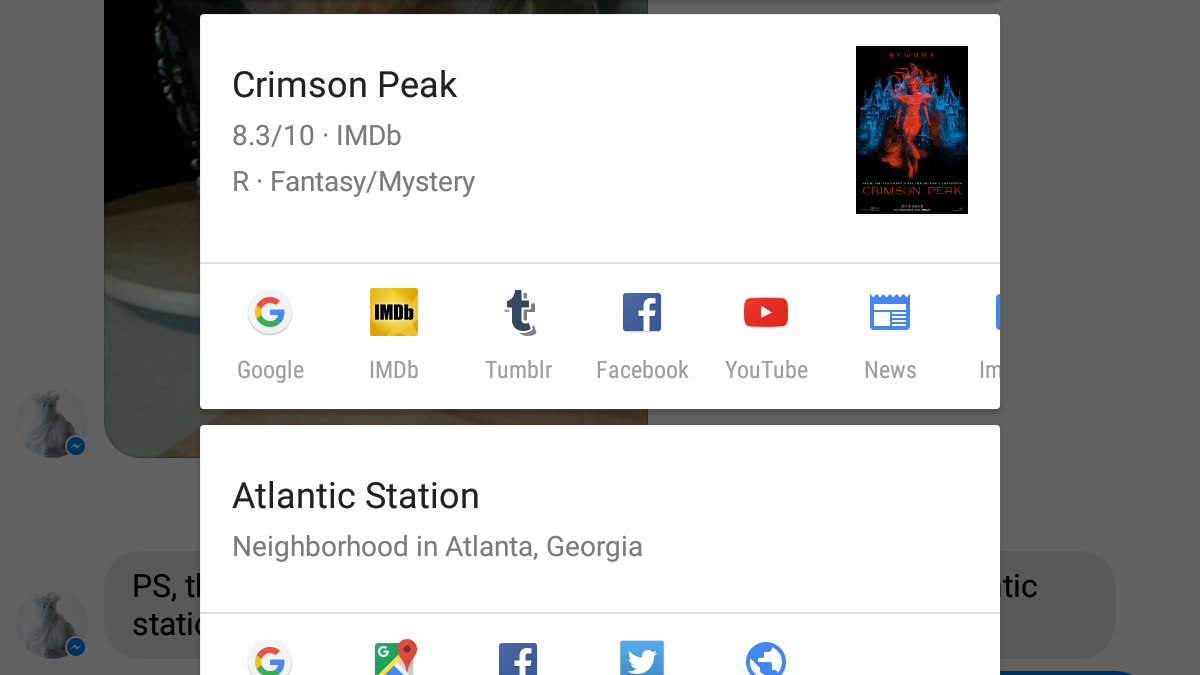 When you activate Now On Tap by long-pressing the home button, Google will take a quick snapshot of what’s on your screen and scan it for any text it thinks you might want to know more about. Then, it will offer up a list of cards with any relevant results. The idea is that instead of closing your app and searching for something, you can just say “What’s that?” and get an answer.

For example, this week my girlfriend sent me a Facebook message inviting me to see an early screening of Crimson Peak. I opened up Now On Tap and it recognised that Crimson Peak is a movie, and offered me links to the movie’s IMDb page, a trailer on YouTube, and offered a few suggestions for Google searches I could perform, including news, cast, or images. I could also perform a regular Google search.

Now On Tap also tries to make smart suggestions for based on the context of your conversation. For example, if you receive an email that says “Would you like to have dinner next Thursday?” Now On Tap might suggest creating a calendar event for that date.

Finally, when you use Now On Tap, you can use the familiar “OK, Google” command to perform a more in-depth search. In some cases, Now On Tap can even recognise what was scanned and take that into consideration for your search. For example, if you’re playing a song in Spotify and use Now On Tap, you can ask Google “Who is the lead singer?” Now On Tap will infer that you’re asking who the lead singer of the band you were listening to is and show you relevant results.

The Reality of Now On Tap 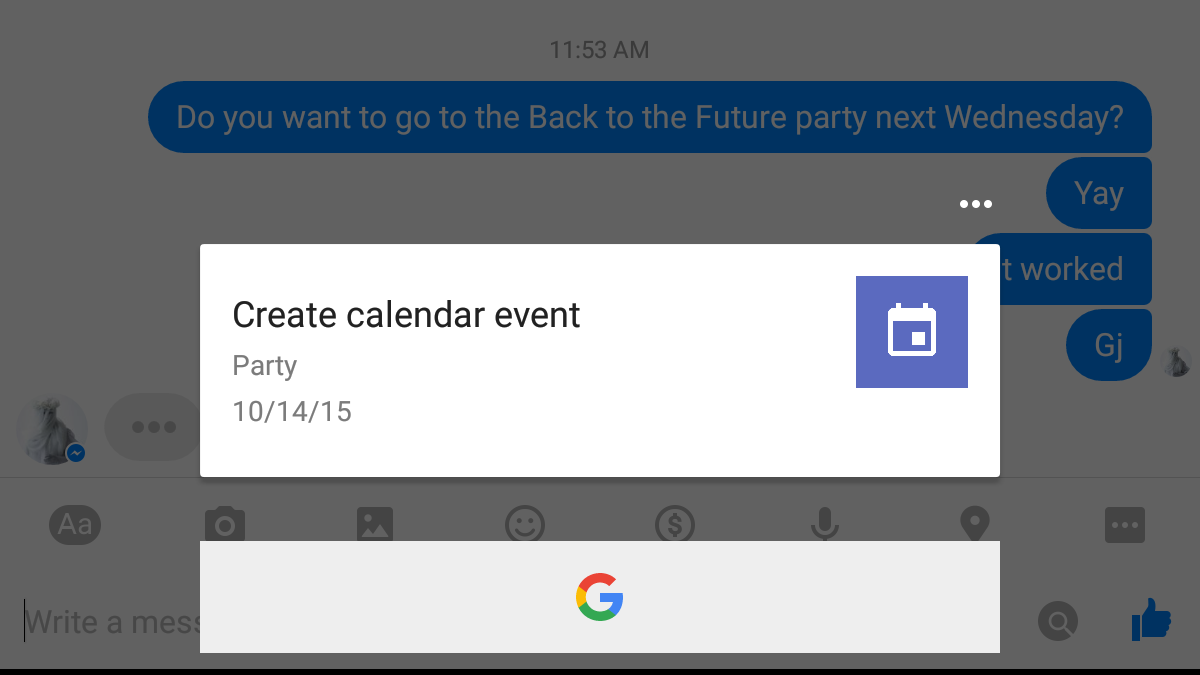 On paper, Now On Tap sounds amazing. In practice it only seems to be useful in a few, rare circumstances. It was pretty good about recognising anything that you could get typical Knowledge Graph cards for. This includes (but isn’t limited to) movies, bands, politicians, diseases, locations, or companies. Once Now On Tap recognises the proper name of something, you can jump to several searches or apps immediately.

The big problem I found is that you don’t really know what information you’re getting by jumping to different apps. If you check Now On Tap for a movie and tap YouTube, you’ll be directed to a trailer, but if you want to search for a different video related to that movie, you have to do it manually. Tapping IMDb would take you to the movie’s page, but you can’t choose to go to the showtimes section of the IMDb app. Performing a Google search would display showtimes, but you have to remember that Google will do this. The shortcut just says “Google.” Despite having IMDb, Flixster, and the AMC app installed on my device, none of the Now On Tap links indicated where or even if I could find showtimes.

This would be less annoying if Now On Tap had some of the awesome intelligent mojo that Google Now has. Unfortunately, there’s very little beyond searching for the names of things that you can do. If you or the person you’re talking to proposes doing an event at a specific time, you can sometimes get a card that suggests adding a calendar event. I was also once able to trigger a card that asked if I wanted to add a reminder when I received a message that said “Don’t forget to go to the post office tomorrow!” However, reminder cards seemed very inconsistent.

It’s also hard to know exactly when a particular phrase or context will trigger a card from Now On Tap. I copied the exact same message about the post office into Google Keep and tried activating Now On Tap. In this context, Google did not interpret this as something that I might need a reminder about and ignored it. So, clearly something beyond mere text analysis is happening.

This might sound like nitpicking, but if Now On Tap doesn’t reliably offer certain cards, it starts to feel like a waste of time to use it. On one occasion, I received the following message:

PS, the crimson peak advance showing is tonight at 7 at atlantic station

This included the name of a movie, a date and time, and a location. Naturally, when I activated Now On Tap, I expected that I might be able to set a calendar event (though a reminder would have been preferable). Instead, activating Now On Tap only showed me information about Crimson Peak, and directions to Atlantic Station. Neither was helpful at that time. Directions might have been helpful later, but by that point it was easier to just go straight to Google Maps, rather than scroll through my message history just to reach the Now On Tap shortcut.

Google also hasn’t done a great job of detailing what kind of tasks you can do with Now On Tap. A brief tutorial one of the first times you use it shows that you can get directions to places, create calendar events, see restaurant reviews if a person names a restaurant, or look up information about a musician. Setting reminders isn’t even mentioned and I only accidentally discovered it while writing this article.

Now On Tap is a Decent Start, But It’s Not There Yet 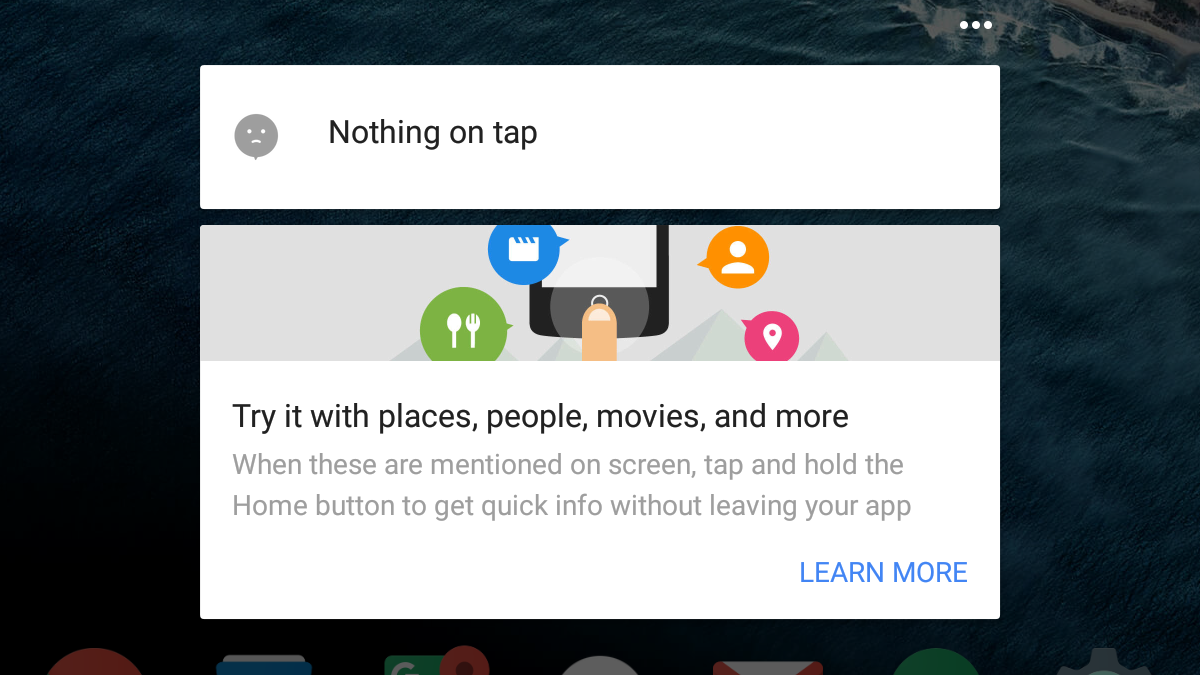 I feel like if this feature were called Google On Tap, it might feel a bit more appropriate. Google Now has a ton of features that bring you information and do things for you before you even ask. The “Now” in Google Now has come to mean intelligent tasks done by a virtual assistant. When I first started using Now On Tap, I expected it to be similarly intelligent about discerning what I was doing.

Instead, Now On Tap is only really good at detecting a few keywords here and there. That’s nice for saving you a couple taps when you want to see the trailer for The Martian again, but if you want to find showtimes and add it to your calendar, Now On Tap can’t really help you much. Even adding a persistent “Remind me about this later” or “Add this to my calendar” button would make it more useful, but the unpredictable cards make using it pure guesswork.

Ultimately, that’s the major flaw with Now On Tap right now. Since you can’t know what kinds of cards you’ll get when you use it (assuming you get any at all), or what the shortcuts do when you get them, you’re taking a gamble. Maybe it will be a useful shortcut, or it might be a waste of your time. If Now On Tap resulted in useful information or actions more often, it might be more compelling, but right now you’re essentially flipping a coin to decide whether you’re going to waste time.