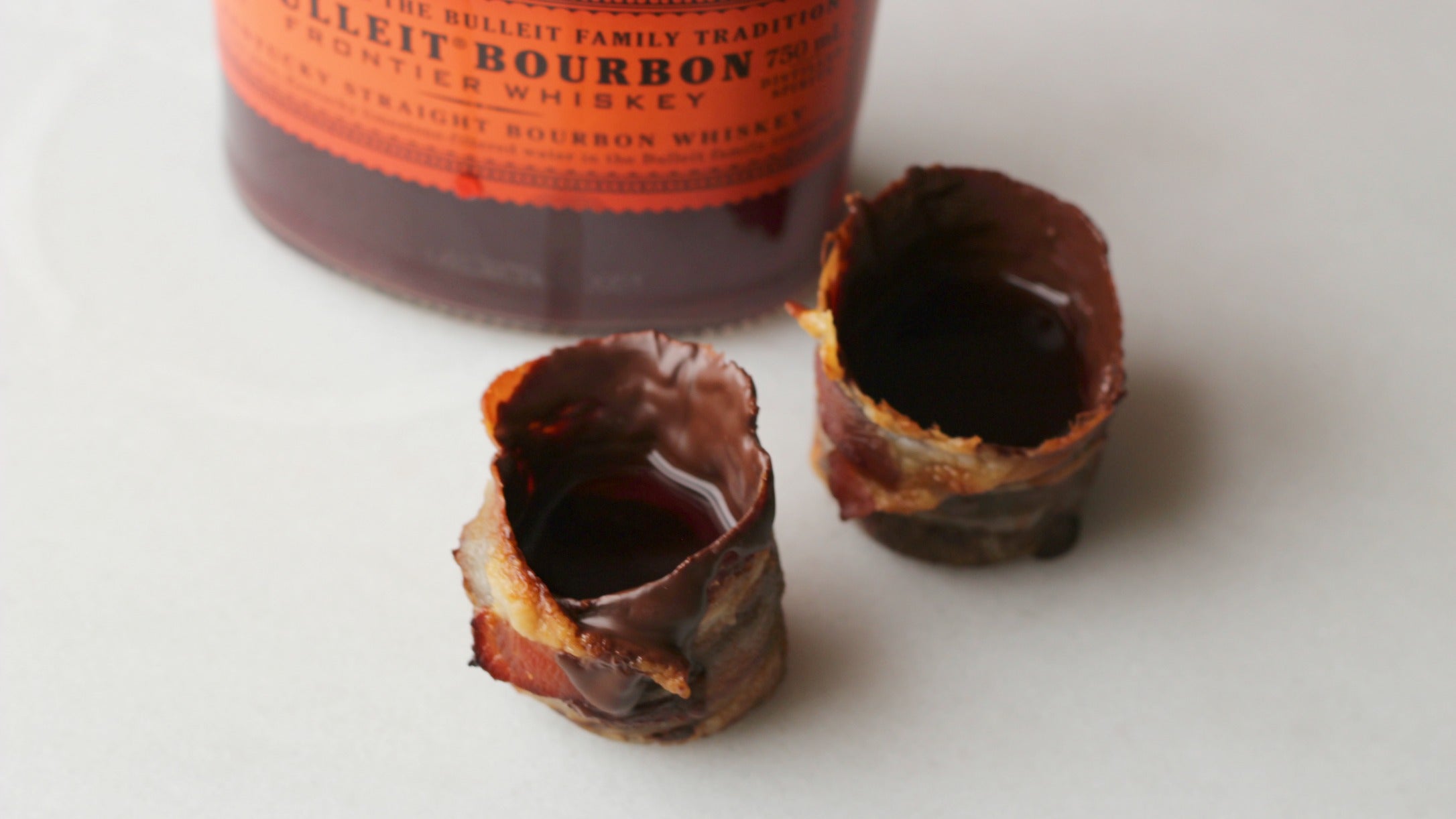 The number one function of a shot glass is to hold alcohol so you can get it into your mouth. Toasted marshmallow shot glasses sure look cute, but if they disintegrate en route to my lips, I will be less than amused. To see if any of these twee-arse vessels are worth your time, we made a whole bunch and tested them for leakiness, flavour contribution, and ease of assembly. We'll start with the best and work our way down to the failures. 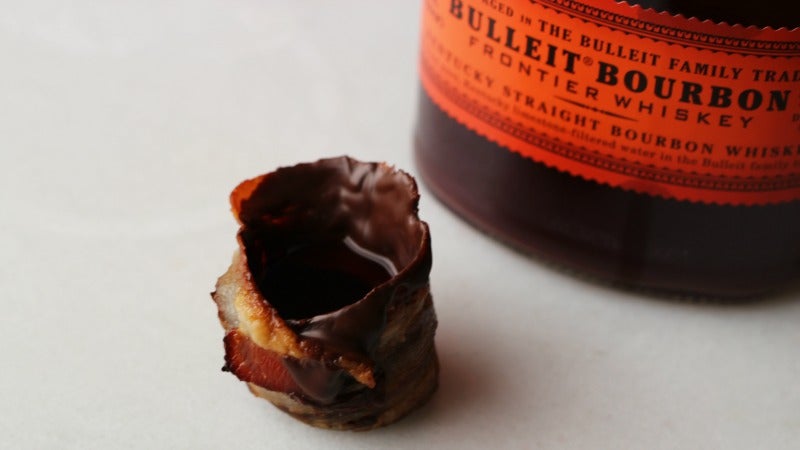 These little guys come from the blog Through the Eyes of my Belly, and I was fully expecting them to fail. Luckily, they did not, and beat out all others for the number one spot. Instead of constructing molds out of paper towel tubes and foil (as they instructed), I just wrapped the bacon around the glass, securing it with a bit of kitchen twine. I then popped them in the oven at 350 degrees for about 10 minutes, keeping a very close eye on them at all times.

It was kind of a smokey process, but they crisped up just fine into cute little meat cups, and slid off the shot glasses with ease. I then coated the insides with tempered chocolate, and let them set until the chocolate hardened. Then, it was the moment of truth, so I filled those suckers up with a little cherry-infused bourbon to test. Let's see how they did:

If you like bacon, chocolate, and bourbon, you will like these. In short, they are totally worth your time. 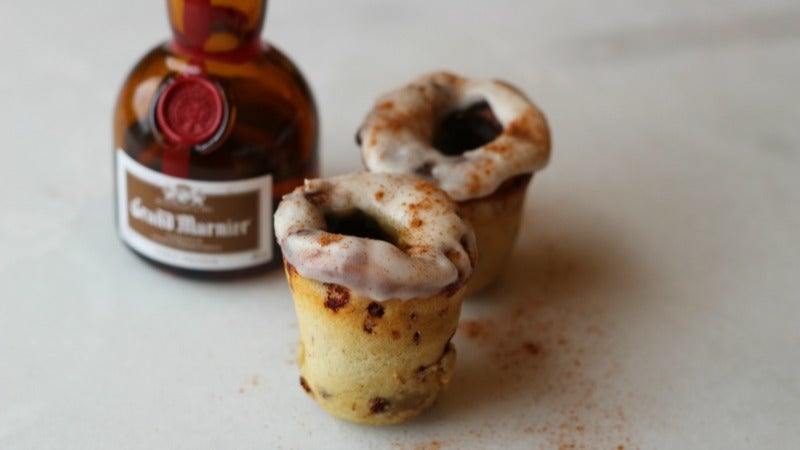 These treats come to us from the stunt food blog Oh, Bite It! and come in second simply because I had to modify them to make them fully functional. (We'll get to the mod in a moment.) To make them, I cut a Pillsbury cinnamon roll in half, shoved it down in a shot glass that was treated with a little cooking spray, and baked them at 350 degrees until they puffed up and browned on the top. Then, while they were still warm, I pushed the neck of a mini liquor bottle down into the dough to create a place for the booze to live. Once they were cool, they wiggled right out.

Now, at this point, Oh, Bite It! instructs us to dip the rims into icing and throw some Bailey's in there. You could do that, but you'd have to shoot that Bailey's quite quickly, as the liquid soaks through the dough, making your glass soggy and soft. I do not enjoy a soggy cinnamon roll, so I added one more step, coating the inside with some melted chocolate. (I used dark chocolate because I had some leftover from the bacon glasses, but white chocolate, almond bark, and candy melts would all work really well.) Once the chocolate set, I dipped the rims in the icing, and filled them with booze. I used Grand Marnier, but horchata liqueur or the suggested Bailey's would be pretty freaking tasty too.

If you want to do shots at brunch, these are your guys. I'd serve them at some sort of shower (baby or wedding), or a morning football game. 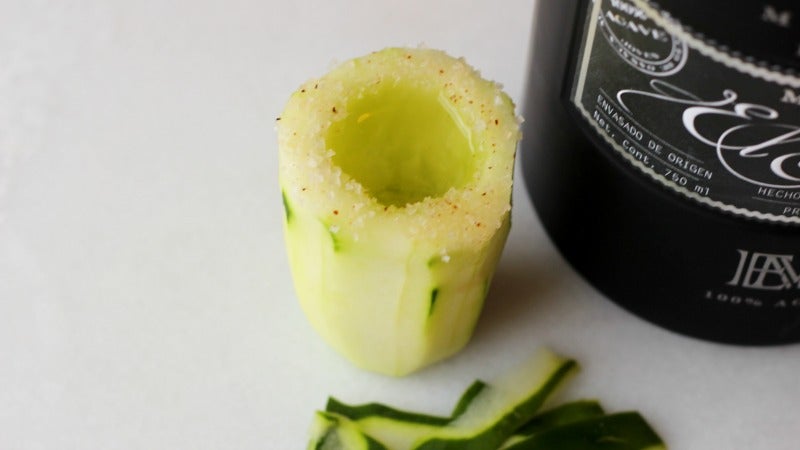 Now things get a little fresher, a little lighter, and a little less involved. Cucumber shot glasses only require a little bit of knife work, plus some delicate scooping. To make them, I cut off a 1 ½-inch piece of cucumber and sliced off the end so it would sit flat. From there, I just scooped out the seedy flesh inside, rimmed it with a little ghost chile salt, and filled it with mezcal. (Gin would obviously be a great choice here too.)

So these aren't the most exciting edible shot glasses, but they do hold their liquor fairly well, and cucumbers have the benefit of working with a variety of different liquors. I do however feel like you'd end up tossing a lot of cucumbers if you were to serve these at a party, depending on how much ranch you have.

I couldn't find any peppermints at my local (stupid, Portland, hippy) grocery store, but I did find Jolly Ranchers, and I figured those would work just as well. I followed the procedure as laid out by the above video, melting candies on a Silpat and then draping them over a shot glass, gently pressing the hot sugar around it to shape. 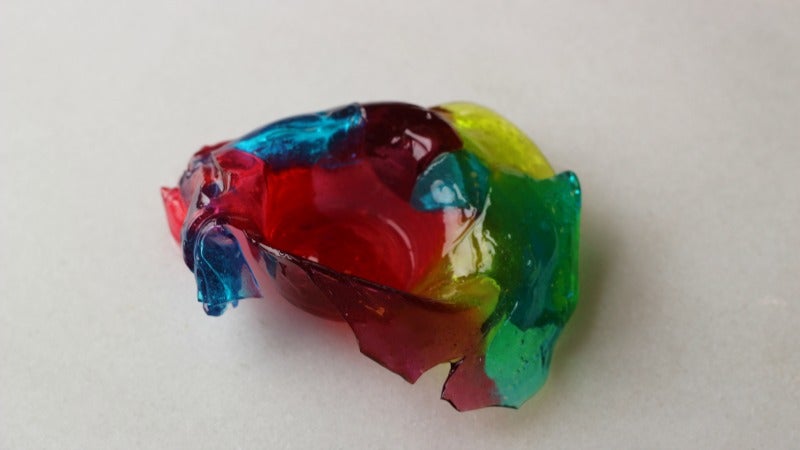 First attempt I was not, however, able to just "pop it off" once it was set, and the glass shattered when I tried to remove it. I re-did the whole thing, spraying the glass with a bit of cooking spray, and it slid off just fine. I then filled it with more of that cherry bourbon. 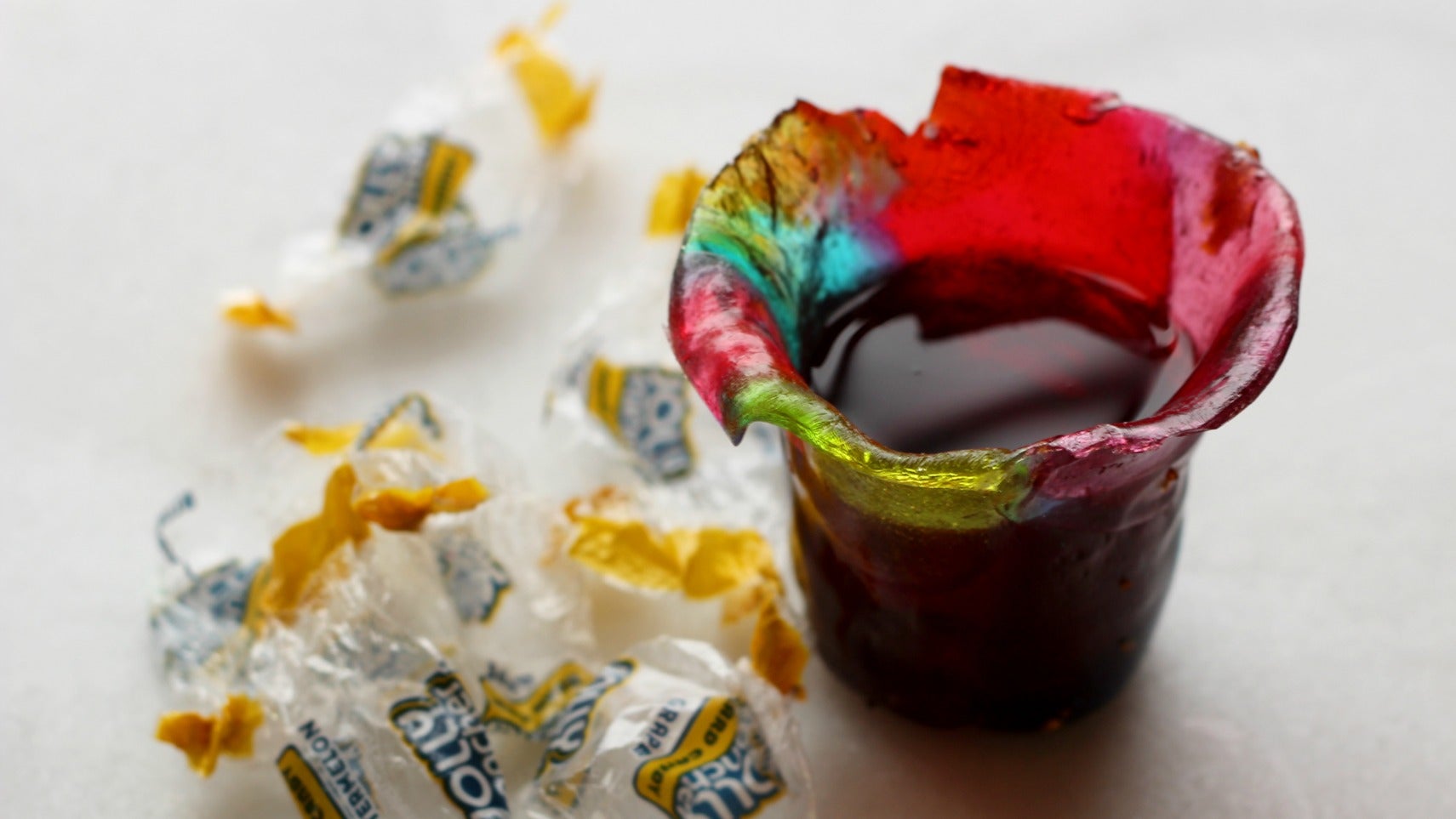 Though I enjoyed making these, I wouldn't make them again. It takes a lot of Jolly Ranchers (10 per glass) and is slightly painful. 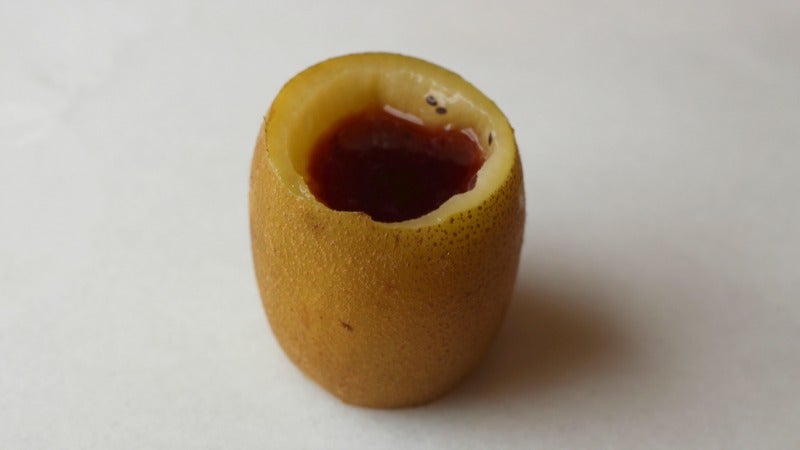 I have made these with both green and golden kiwis, and feel fairly neutral towards both. They're not difficult to make, exactly, but you have to be pretty delicate in your scooping. Just slice off both rounded ends and scoop out the seedy flesh. Do not peel them first, as that will cause the whole kiwi to kind of mush out. Fill it with rum or something.

These aren't the worst — at least they don't leak — but they are kind of ugly and frustrating to hollow out without wrecking everything.

The Most Finicky: Strawberry Shot Glasses 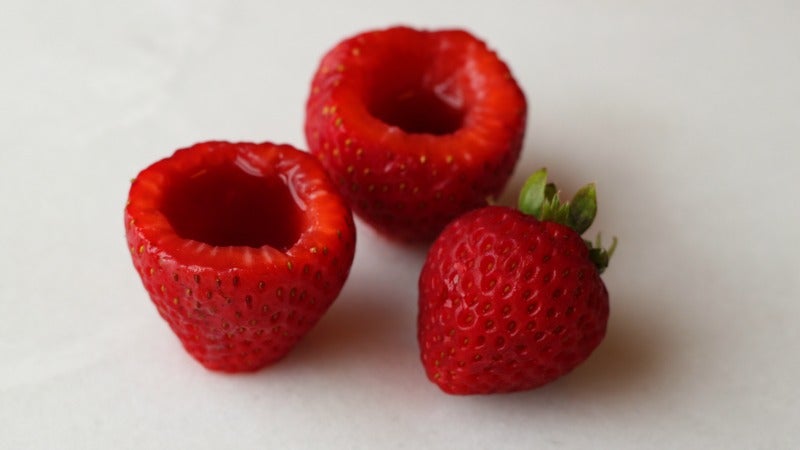 Here we have another porous fruit that works better in theory than practice. Though easy to make — just slice off the top and tip and scoop out the inside with a grapefruit spoon — they start leaking within a couple of minutes, and don't hold a lot of alcohol.

I give this one a resounding "EH." 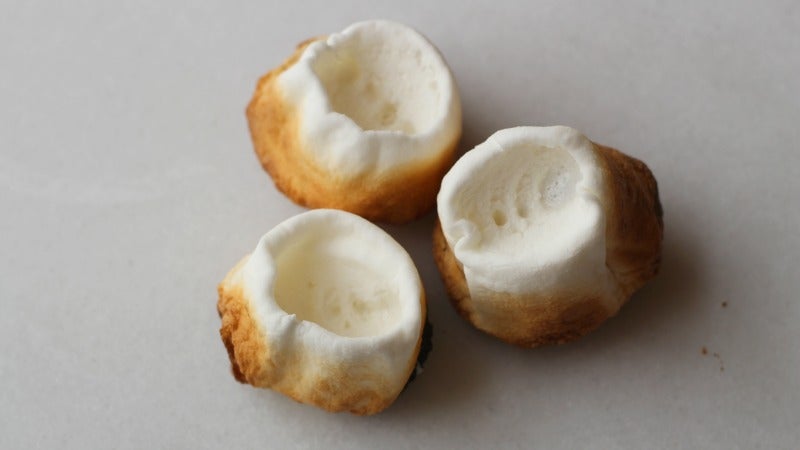 They appear far more cavernous in this photo than they actually were. This one just didn't work. I toasted the marshmallow on all sides, as instructed by the video above but — unlike what happened in that same video — they never really collapsed to form a cavity for my booze. Since there wasn't a place to put any alcohol, I didn't put any in, which is probably for the best, as the the liquid would just melt the sugar anyway. I'm not going to even bother answering the usual questions. 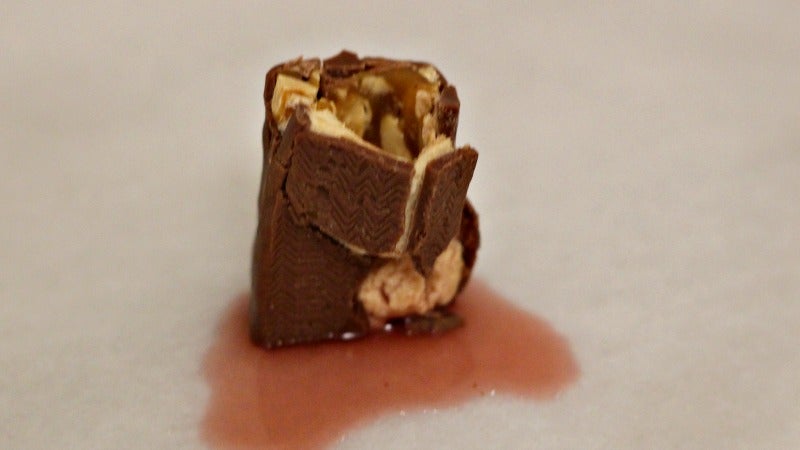 This one, which is also from Oh, Bite It!, comes in dead last because it was a straight up betrayal. The instructions are simple enough:

Cut the Snickers in half, and gently push down in the center using either a knife or whatever will fit, creating a hole.

Then you are supposed to fill that hole with booze. There are two major problems with this, however. First, it is almost impossible to create said hole without creating leaks and, if you do manage this incredible feat of delicate knife work, the hole is too small to hold any appreciable amount of alcohol. Boo.

That was a lot of gimmicky nonsense, you guys, but I think we learned a lot. If you're going to make a ridiculous drinking vessel, you better go hard, and you better make it delicious. It also better hold your freaking booze because, without booze, what is the point of a shot glass?

The Difference Between Red, White And Brown Onions

Chris Jager 21 Feb 2020 10:30 PM
What's the deal with white onions? I don't think I've ever seen a recipe that explicitly called for them. And yet there they are, in every Aussie supermarket. How are they different? What do people use them for? What is the meaning of life? The following infographic from MyFood Blog has all the answers you're looking for. (Well, maybe not the last one.)