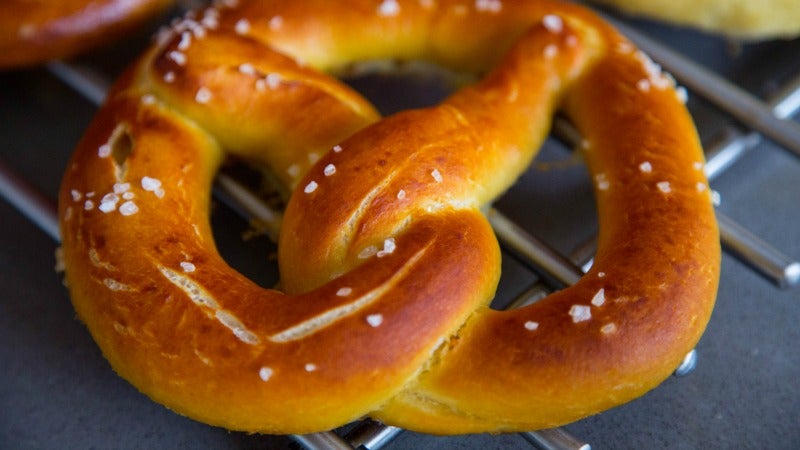 Old-fashioned pretzels get their distinct flavour and colour from lye, a super alkali (basic) substance that might be a little intimidating for home use. Luckily, you don't have to use the super caustic stuff to make a better pretzel, you just need to bake some bicarbonate of soda. Photo by Niki Georgiev.

According to Food52, just a little time in the oven can level up your sodium bicarbonate:

By spreading baking soda out on an aluminium-lined baking sheet and putting it in a 250° F [120C] oven for one hour, you'll turn a weak alkali into a stronger one — or, as Harold McGee put it in his 2010 New York Times article outlining the tip, you'll get a "a more muscular and versatile alkali" that's closer in chemical make-up and effect to its hulky cousin, lye (but without as much scariness).

While not as strong as lye, this more basic base makes a better homemade pretzel, with a darker crust and slightly bitter flavour. Just take your favourite pretzel recipe and dip each proofed pretzel in a boiling mixture of 10 cups of water plus 2/3 cup of the baked bicarbonate of soda for about 30 seconds. Brush on an egg wash and some salt, and bake as usual. If you have any leftover baked bicarbonate of soda, you can also use it to make delicious ramen, so there really is no downside.

To Supercharge the Power of Your Baking Soda, Bake It! [Food 52]