You Should Know Which ‘Financial Phase’ You’re In

Sharks don’t really like the taste of people, but their poor vision and the splashing of beachgoers can lead to sharks confusing you for a tasty snack. Here’s what you should do if you see a fin and the Jaws theme starts playing.

If you don’t want to see fins circling while you surf, it’s best to stick to safer waters. According to shark expert Richard Peirce, the former chairman of Shark Trust, it’s best to avoid swimming near river mouths and fishing boats. Peirce says fishing operations of any size are prime shark attractors. Hooked fish bleed into the water, and that attracts sharks. Even a small fishing boat will toss dead fish and fish parts, or chum, into the water. It’s also a bad idea to let yourself bleed or urinate in the water for the very same reason. And if you can, avoid swimming in the ocean early in the morning or late at night. Peirce says most shark attacks happen at those times because they have reduced visibility and will mistake people for prey.

There are 15 shark attacks per year in Australia on average, with three recorded fatalities per year. So while shark attacks aren’t an everyday occurrence, they’re on the rise, and they happen often enough that people who spend a lot time in the ocean are always on the lookout for ways to keep them away.

“Shark repellent” is a liquid extract you spray on yourself that’s made from putrefied shark remains. The idea is that nearby sharks smell their dead friends and decide they don’t want to eat you. It works pretty well — even the Mythbusters say so — but these sprays are expensive and make you stink like, well, dead shark, so it’s not ideal for a fun day at the beach. Other methods, like the Shark Shield, use electromagnetic fields to keep sharks away. When sharks encounter these fields, the electrical receptors make them feel intense discomfort so they leave the area unharmed.

Again, these have proven to be somewhat effective, but they cost around $800, and are really only used by deep sea divers or commercial fisherman. Truth be told, humans do far more harm to sharks than they do to us since we hunt them in order to make soup, lubricants and leather. 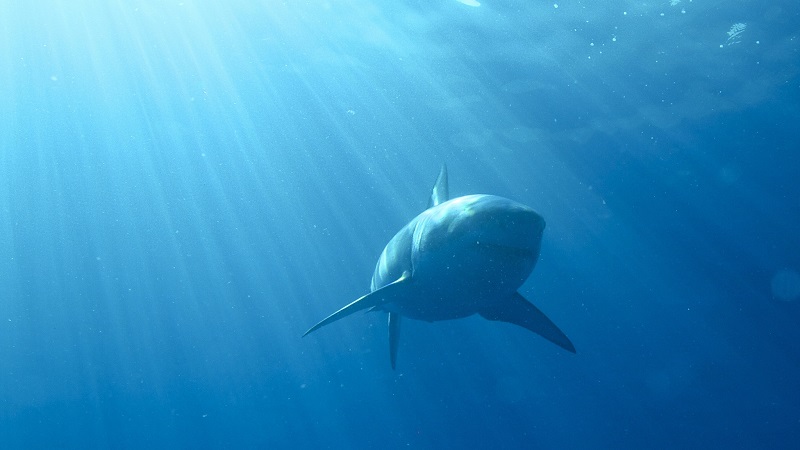 But if you do have a run-in with one of the most effective killing machines on Earth, stay chill. According to Peirce, splashing around wildly is just going to excite the shark and make it more interested. It doesn’t want to eat you, but it might get curious. For all the shark knows, you could be a seal or large fish. Unfortunately for you, the only way sharks can interact with things is with their razor-filled mouths, so splashing like crazy might earn you an “exploratory bite”.

Once you regain your composure, here’s what else Peirce says you can do:

If the shark attacks, George H. Burgess, director of the Florida Program for Shark Research, suggests you try and put something in between you and the shark if you can. A surfboard, boogie board or flotation device will do. As it makes a pass at you, try to strike the shark anywhere you can. This will startle the shark and may buy you enough time to get out of the water.

If the shark bites you and won’t let go, poke the shark hard in the eyes or gills since those are very sensitive. As soon as it lets you go, get to shore as fast as possible and seek medical attention.