Shark repellents range from liquid sprays made from dead sharks to a simple magnetic wrist band, but are any of them effective? Or are they sea snake oil for paranoid beachgoers? We take a look at the available products on the market.

There’s nothing that can rip through a blissful Australian summer quite like news of a shark attack.
While the odds of such a thing happening to you are tiny, the gruesome and unpredictable nature of a shark coming in for the kill is enough to instil fear and loathing in casual beachgoers across the nation.

So wouldn’t it be great if, like 1960s Batman, one had the reassurance of being able to whip out a can of shark repellent and send the terrifying creature back into the murky depths?

Don’t laugh – that stuff is actually real, and is used by commercial fisheries, divers and spear fishers today.

While state governments are pumping millions of dollars into beach-wide shark mitigation strategies, a new market for personal shark repellent devices is emerging.

Products range from specially designed wetsuits to a simple magnetic band worn on the wrist.

But it’s a minefield for consumers as to which of them can really give protection from a Great White, and which are simply snake oil for sunbathers.

“Most of them have not had any robust scientific testing done on them, or if they have, the companies are not sharing it with the public,” says the University of Western Australia’s Shaun Collin, an expert in the field.

Here’s the lowdown on what’s out there. 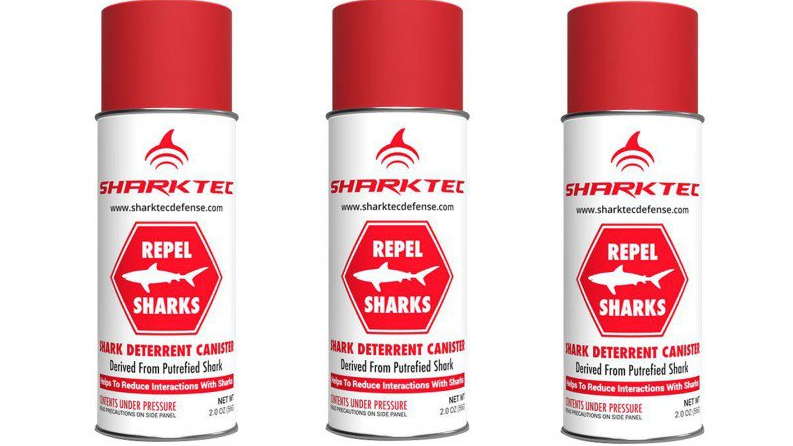 Developed by US scientists at a company called Shark Defense Technologies, this is essentially a liquid extract made from dead sharks.

When sharks smell their own “necromones” they have a sudden and violent reaction and bolt in the opposite direction.

“It switches off their feeding response,” says Shark Defense’s Dr Eric Stroud.
“It’s a strong, ancient signal when they smell their dead.”

Various YouTube videos, including one from popular science show Mythbusters, give credence to the science. UWA’s Professor Collin says there is “quite positive evidence” of its effectiveness.

Its applications are limited, however.

For one, this stuff stinks. Like, really stinks – probably enough to make a human swim in the opposite direction too.

Second, it’s only useful when you know a shark is there – and how many on the receiving end of a shark attack can say they saw it coming?

Where repellent spray does come in handy is in protecting sharks from commercial fishing operations. Dunk a shark bomb in the water to clear them out, and the fish won’t blink an eye. The technology behind NSW-based Shark Shield has been around for decades, and is well regarded among scientists and users.

The electronic device is worn around the ankle or attached to a surfboard.

It consists of two electrodes with a long antenna which sets them a distance apart, creating an electromagnetic field of four metres by six metres.

Every shark has electrical receptors in its snout. When a shark encounters a magnetic field it experiences intense discomfort and swims away, unharmed.

Shark Shield chief executive Lindsay Lyon says testing has shown sharks moving at pace will get within two metres of the field before being deterred.

Professor Collin and his team at the UWA Oceans Institute recently tested various shark deterrents including strobe lights, electric and acoustic deterrents, and bubbles (really), and found the Shark Shield to be effective, including against notorious predators Tiger Sharks and Great White Sharks. The study is due to be published early 2016.

Terra Australis, a WA video production company which is documenting the effectiveness of various personal shark repellents, says Shark Shield is the most effective device it has tested so far.

While evidence of its effectiveness is solid, Shark Shield is both expensive and cumbersome. It’s not a practical option for casual swimmers but is popular among spear fishers and divers. WA surfboard maker David Smith has essentially taken the same concept behind Shark Shield and stuck it in a surfboard.

The Surf Safe electronic device emits a higher frequency signal than the Shark Shield, and Smith says it has been designed that way because it sits on the surface of the water rather than being submerged. He says the Surf Safe’s protective field is “about four to five metres in diameter”.

There are not yet any independent scientific studies published which show Surf Safe’s effectiveness but Smith says at least two Australian universities have been testing the device, with studies to be published in 2016.

“There’s heaps of people putting stuff on the market out there and we want to make sure our product’s right,” he says.

Surf Safe has been popular at Reunion Island, the French surfers’ paradise that lately has been devastated by shark attacks, with several deaths reported in the last four years. Smith says 300 devices have been sold there.

The drawback of Surf Safe is that it requires a professional surfboard maker to install it. In 2016 the company is bringing out a new product which is easy to switch between boards. 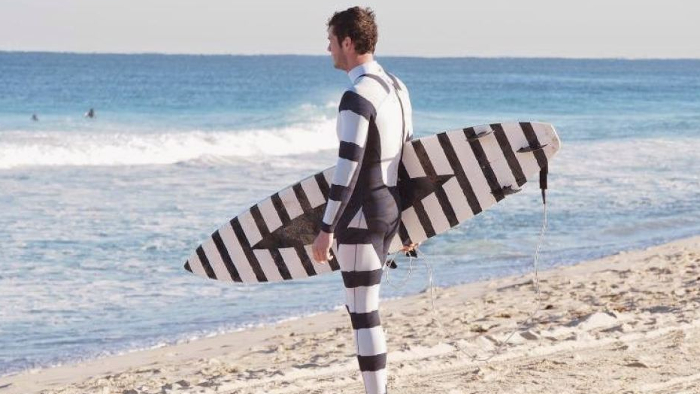 UWA researchers studied how sharks respond to visual stimuli and developed two types of wetsuit, and a surfboard sticker, designed to confuse them.

The first type camouflages the wearer by disguising them in ocean-like patterns (a shark sees in black and white and picks up on contrast).

The second is covered in gnarly black and white stripes borrowed from a sea snake, so the shark thinks the wearer is poisonous and steers clear.

Even though you can buy one of these wetsuits today, UWA’s Professor Collin says early tests – while “very positive” – have not been conclusive on the wetsuits’ effectiveness.

“Ironically, we’ve struggled to find enough Great Whites [to test them with],” he says. Sharkbanz, which launched in Australia at the beginning of 2015, manufactures a wearable shark repellent – essentially, a plastic bracelet with a static magnet inside it – under licence from US company Shark Defense. That’s the same company that makes the rotted shark spray.

Sharkbanz Asia Pacific chief executive Charmaine Wilson says Sharkbanz “can be effective against deterring investigative Great White Sharks” up to a distance of two metres, but “will not prevent an ambush attack”.

“You’re better off with Sharkbanz than nothing,” she argues.

There are no independent scientific studies showing the effectiveness of the Sharkbanz device specifically. While there are studies examining magnets as shark deterrents, these were published by the same scientists who founded Shark Defense.

There is plenty of scepticism about Sharkbanz among scientists and rival manufacturers.

“There has been some literature on magnets but it’s quite contradictory,” he says.
Dr Stroud says sales of Sharkbanz are “going really well”.

Here’s a video of a shark eating a Sharkbanz. (The company disputes the testing method in this video. You can read their response in the YouTube comments.)