As of today, the new Google Chromecast is on sale in Australia. It’s a significant improvement in several small but notable ways from the original model — which is an impressive feat, considering how useful it was and still is.

The new Google Chromecast 2 / Chromecast 2015 is a $59 streaming dongle that connects to your Wi-Fi and accepts commands from your smartphone or tablet, whether it be an Android, iOS or Windows Phone device.

The idea is pretty straightforward — on any app built with Google Cast capability, like YouTube or Netflix or Stan or Spotify or a host of other video- or audio-driven services, tap the little Cast button, select the Chromecast on your network, and in a few seconds, your content will be on the big screen. Oh, and it comes in yellow and red colours now too.

Under the hood, the new Chromecast 2 now finds and connects to 802.11ac networks, including the 5GHz frequency band (also on 802.11n). If you’ve shelled out on a $300-plus router in the last couple of years, then you’ll appreciate this — the new dongle has much better range and connection speeds, which should translate into faster buffering and smoother playback especially for high-resolution content. For the ultimate in connectivity, if you have a router nearby, you can get a wired Ethernet adapter that uses the same microUSB port as the power input.

There’s still no remote control — damnit, why — but the Chromecast 2 remains the streaming stick of choice for us, setting the benchmark in its ease of use and design. Part of that is its excellent build quality — for a US$35 plastic hockey puck, it’s surprisingly well put together, and the thick rubberised HDMI connector and two-metre USB to microUSB cable are just right for connecting the dongle to either your TV’s HDMI and power, or for connecting an external device like Oppo’s BDP-103 Blu-ray player, whether it has USB power to supply or not.

The Chromecast 2 is most different to the original in its design. Gone is the single-stick dongle, with a microUSB power input at the rear and a HDMI A/V output at the front; the Chromecast 2 has an integrated HDMI cable, but that connector is now three or four inches away from the circular hockey puck — which makes for more flexible placement of the device on a TV with rear-facing HDMI ports, for example, especially if you’re wall mounting. The microUSB input is in the same place, and Google includes the same AC power adapter and microUSB to USB cable — you can power it off your TV’s USB ports if it has them.

The setup procedure on the new Chromecast 2 remains as simple as it was on the original. It’s actually even faster, purely because the device itself is quicker to load new pages and to download the necessary day-one updates that any Chromecast is going to require. It takes less than five minutes to plug it in, find it with your smartphone or tablet — there’s a complementary Chromecast app to get you started — and for the device itself to restart a couple of times and get up and running.

And when it is running, you do genuinely notice the difference if you’ve used a Chromecast before. It’s not that the old version is unbearably slow, just that it’s slower — it’s the difference of a couple of seconds versus five seconds to launch the YouTube app, a couple of seconds versus 10 seconds to launch the Netflix app. When you get to actually launching videos in these apps, your Internet streaming speed makes the gap a little narrower, but you can be reasonably confident of getting your Netflix stream up and running within 10 seconds on the Chromecast 2 versus 20 or more on the old version.

I’m in two minds about the Chromecast 2’s design. The new iteration is certainly a little more versatile, and it does suit wall-mounted TVs with rear-facing HDMI ports better. If your ports face sideways or downwards, there’s no effective difference, but it’s still that extra bit of smart design — a flexible cable — that’ll make the Chromecast 2 fit in more TVs. I would say that the microUSB power input could be more smartly placed, though.

On the other hand, even though its HDMI connector magnetically clicks to the puck itself and hides away tidily, is a little bulkier and cable-ier than the original. If you’re a constant traveler, a Chromecast and Wi-Fi hotspot makes for a great combo to smarten up your hotel room’s dumb TV, and the new one is just a little less sleek and streamlined. It’s not exactly a big deal, but it’s worth mentioning. I’m sure I’m the only one that actually cares about this.

And yes, I do still want a remote control. In the last three years of using a Chromecast, I’ve found that I’m extremely likely to use my Chromecast in the living room late at night, after a long day’s phone use. I’ll load up a movie, then go and put my phone on to charge in a different room. If I want to change the volume or pause the movie, I can do that with my TV’s remote, but what if I want to change videos entirely? You can use any HDMI-CEC-compatible device’s remote control to control basic functions of the Chromecast, but I’d like a little candybar with a five-way control pad and hot buttons for popular apps like Netflix and YouTube.

Chromecast still requires Android app developers to specifically include Cast support in their apps. For some companies, that’s a no no due to the supposed increased risk of piracy — it’s easier to lock your content to a single small screen than it is to share it to another remote source. It took a while for Stan and Presto and Spotify to get Chromecast support, for example; it’s not a sure thing either. And that means that you’re not buying the same peace of mind that you are with a dedicated streaming box like the Apple TV.

Because the Chromecast 2 is so simple, it’s not so versatile. You can’t Chromecast many games to the big screen, for example — I’d love something like Quiplash on my TV, or the beautiful Lara Croft GO. You can use Android’s Cast Screen feature, but it’s a clunky and relatively slow workaround, even on the newer and more powerful Chromecast 2. Something like an Apple TV will do more, albeit for a much higher price. 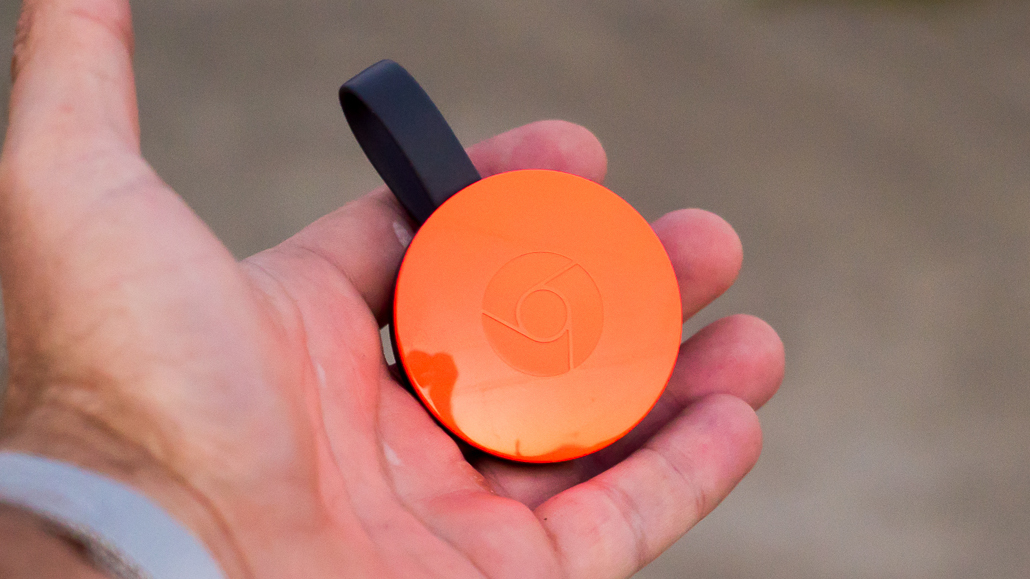 The new Chromecast is $59 in Australia. That’s a slight bump over the $49 RRP of the previous version, but that’s not a big deal considering the extra functionality of the design and the faster speed it operates at and the faster Wi-Fi it supports. That’s a good price for what is a good little device, which far outweighs its price tag with the amount of utility that it has and the quality of the video that can be streamed through it.

The less compact design might annoy some users, especially those with LG, Samsung and Sony super-thin LCD and OLED panels which often have side-facing HDMI and USB ports quite close to the edge of the screen’s rear, because the combo of magnetic HDMI port and hockey-puck Chromecast plus a longer, thicker USB cable bundled in the box is definitely a chunkier setup than the slimline original Chromecast. Sure, you do get better Wi-Fi performance with the newer unit and the extra distance between port and puck might have a lot to do with that, but it’s still frustrating.

I still think that Google is missing a trick by not including a tiny, simple remote control with the Chromecast 2. Just a little thing, with a play/pause button, volume control, five-way navigation pad and some quick-launch button for anonymous apps like YouTube or once-authorised apps like Netflix or Stan. You can control most everything quickly from your smartphone, but there’s no substitute for a pointing a little clicker at your screen.

It’s very hard to complain about the Chromecast. It does so much and it costs so little. It’s undoubtedly better value than a $269-plus Apple TV or a $200-plus Wi-Fi-enabled Google Cast set-top box or Blu-ray player — at that price, it’s impossible not to be.

You can purchase the Chromecast 2 in Australia from JB Hi-Fi, Harvey Norman, Bing Lee, The Good Guys and Google’s online store.