Behind The App: The Story Of Zombies, Run! 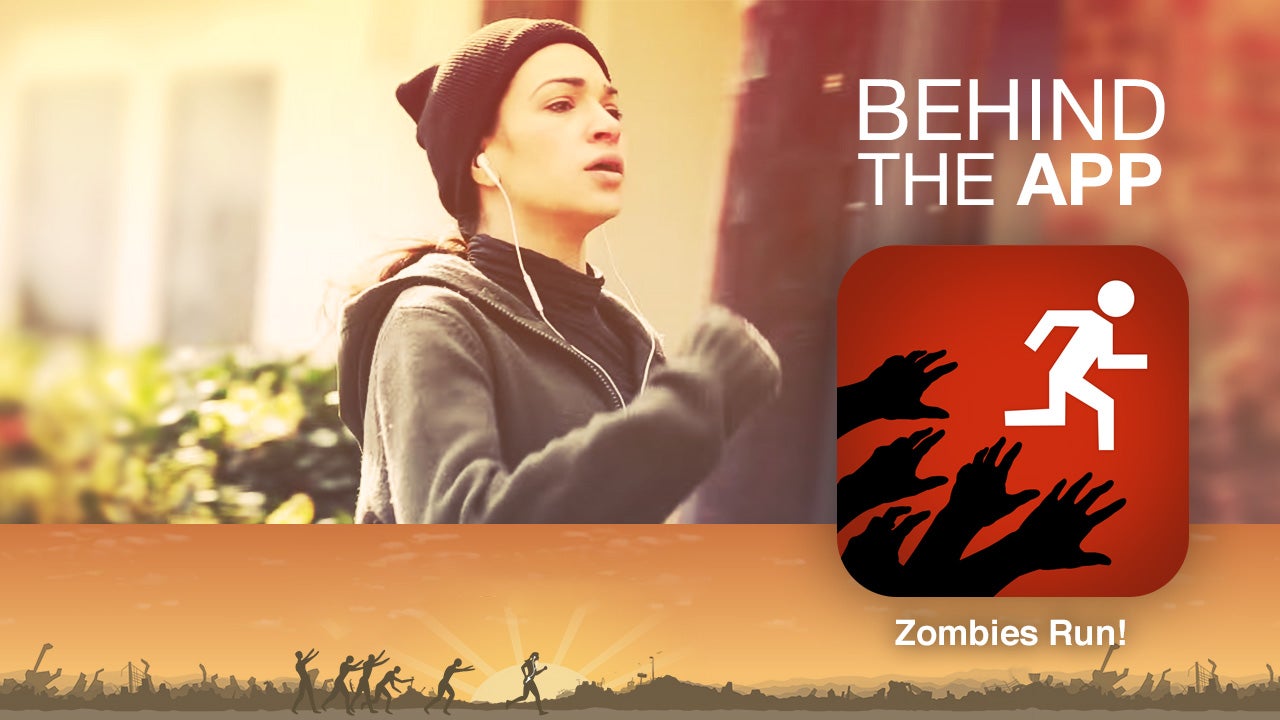 Look out behind you — the zombie apocalypse is upon us! In today's popular media you can encounter zombies at every turn, but one of the most innovative uses of the zombie trope came from an app. Zombies, Run! uses a zombie survival story as a motivator for exercise.

Zombies, Run! was developed by Adrian Hon at his company, Six to Start, along with writer Naomi Alderman, after a successful Kickstarter campaign. Why did the duo have zombies on the brain, and how did they come up with the unique idea? We caught up with Adrian and Naomi to learn the story behind the app.

Where did the idea for the app come from? Were you trying to solve a problem you'd experienced, or did the inspiration come from somewhere else?

Adrian: I used to hate running as a teenager and only really got into it with the help of gadgets like the Garmin Forerunner GPS watch and Runkeeper. They're a great way to help you improve running, but they don't actually make the act of running any more fun for beginners, so I've always wanted to make a real 'running game' that motivates you to go further and faster. In other words — I wanted a running game, not a gamified running app.

Naomi: Just before Adrian and I had a chat about this, I'd joined a "beginning to run class" where they asked everyone why we wanted to learn how to run. One woman said: "to escape the zombie horde" which became a sort of class joke, we'd say it all the time. So when Adrian said "running app," I said "something where you run from the zombie horde!" and it all came from there. I think we came up with the key parts — that there'd be audio drama to listen to, that you'd build up your base in a Sim City fashion when you got back with the supplies you'd "collected" while out running.

Naomi: First we put it on Kickstarter! We were pretty early to Kickstarter, mostly because Adrian is relentlessly interested in The Future and he thought Kickstarter was it. We launched a Kickstarter project in September 2011, and we became the highest-funded video game on Kickstarter in 2011. Of course, 2012 was when Kickstarter really took off, so we didn't make millions — but the response was enough to make me put aside all other work to get the first set of 30 scripts written in just a couple of months.

Adrian: There was a lot of production and development to be done; writing the scripts, casting, recording the actors in our makeshift studio, editing; along with developing the iOS and Android apps plus the ZombieLink website. It was a lot of work for not a lot of people, but we all felt like we were making something people really, really wanted, and so it wasn't hard to stay motivated.

Adrian: We went for both iOS and Android. We initially planned to launch only on iOS with Android coming at an unspecified later date (mostly because we only had one programmer) but the demand was such that we felt we had to commit to Android. Later on, we also developed a version for Windows Phone with the help of Microsoft, but to be totally honest, it didn't sell very well at all.

Naomi: iOS was a no-brainer for us, we're both iOS users and the platform has a track-record for actually being able to make money in app sales! And our Kickstarter backers were so vocal about wanting Android that we decided early on that we'd do that too — and it's certainly been worth it to us in terms of sales. 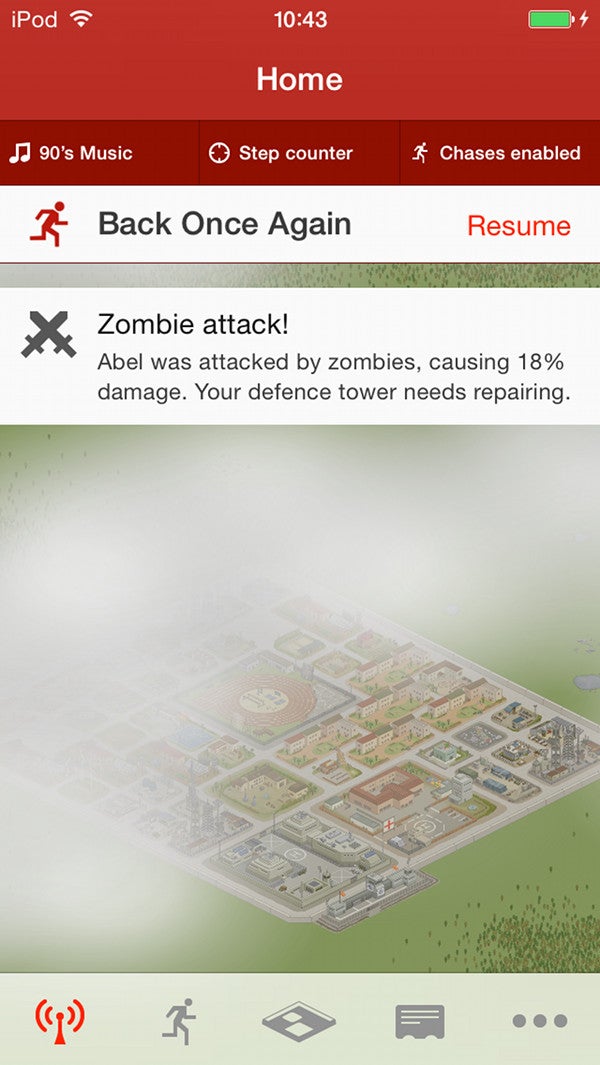 Naomi: For me I guess it's been — and continues to be — the demand for more and more content. Great writing is hard and expensive to make, and difficult to quality-control if you're going to do a lot of it. I don't think I expected that three years on I'd still be thinking about zombies and these characters I created… but it's been really rewarding to see my story unfold and to witness the fans becoming so excited about it.

Adrian: Two big roadblocks stand out for me. The first one is related to the Kickstarter, in which we promised all of our backers a free download of the paid app (we did it by making a free version of Zombies, Run! called ZR Advance and giving backers a unique username and password to unlock it). We initially weren't sure whether this kind of pre-selling was permitted by Apple but when we were assured by Apple staff that it was, we went ahead.

A few months after launch, we got a very stern call from Cupertino telling us that we had broken the rules, etc., and we had to take down ZR Advance, stat. No amount of arguing changed their minds, although they did acknowledge that we hadn't acted maliciously (I'm pretty sure they checked out our story regarding the assurances). So we had to, effectively, take back all of our backers' rewards, which was gut-wrenchingly painful.

We did the only reasonable thing possible in that situation — we offered everyone a full refund, and we also reduced the price of the app for a few days so they could pick it up cheap. In the end, very few people asked for the refund, which was very kind of them. But yeah, the lesson is that you shouldn't pre-sell apps.

The second roadblock was related to the launch of Zombies, Run! Season 2, where we completely rewrote both apps and changed their behaviour. There was a lot of firefighting that month, and it changed the way we do QA and testing. Another lesson learned.

Adrian: Super-exciting. We already had 6000 people who were counting down the days until they could play, and we got all kinds of press. The app zoomed straight into the top 10 paid apps, and that was at $US7.99! It was such a relief to have it out and to have people enjoy it. The money didn't hurt either.

Naomi: I'm lucky because my part — the scriptwriting and being involved in casting and recording — happens quite a while before the launch of each season of Zombies, Run! so I get a chance to recover before launch time! I think it's quite different for Adrian, but for me it's a great celebration of the work we've done — and I enjoy doing the interviews and so on. 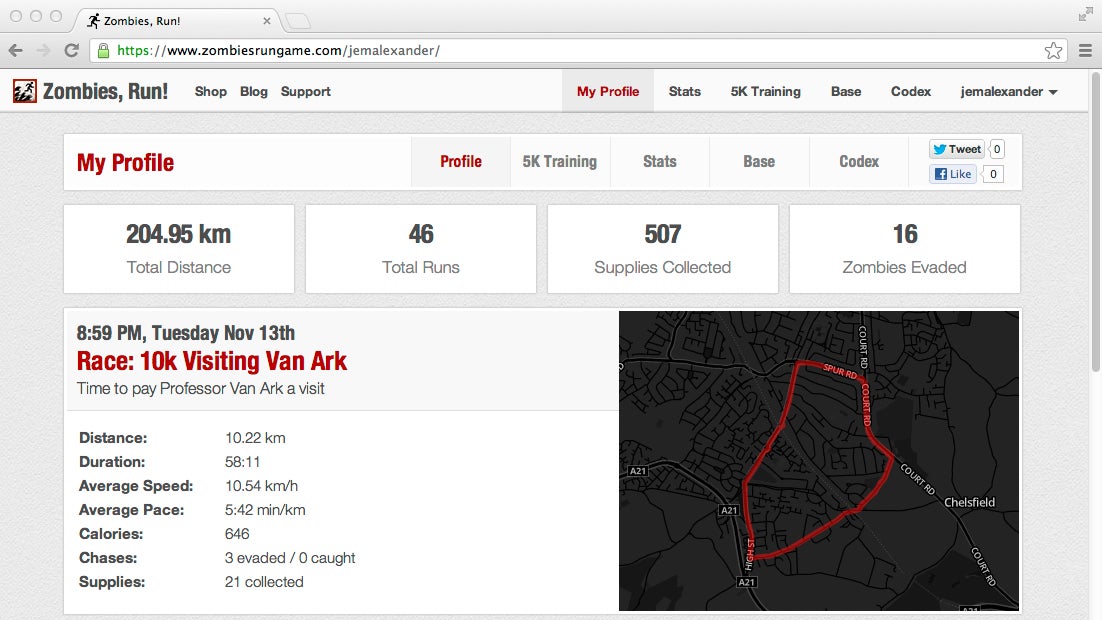 Naomi: Six to Start has a great team who handle user feedback. Since our Kickstarter, we've been committed to laser-focus on customer service; when your backers have actually given you the money to make the thing, you tend to feel a lot of respect, gratitude and a sense that you owe them good treatment! Having said that, with more than a million players there's always one or two who make me wish for a "refund your money and take the game away from you" button — mostly people who seem to have a problem with the fact that we treat our female characters and gay characters just the same as the straight men.

Adrian: We read and respond to every single email we receive from players — over 37,000 of them. For the first few months, I personally responded to a few thousand, which wasn't helpful for my stress levels but it was useful to know what people felt about the app. I still read a lot of the emails, and we see every single tweet and blog post about Zombies, Run! A lot of user suggestions are just impractical or things that we can't do effectively, but sometimes there are neat solutions.

Adrian: It's a real balancing act. We basically have two main audiences; the first are our loyal players who have played Season 1 and Season 2 and are right at the leading edge of Season 3. These guys are the early adopters and like getting new features and options. Our second audience is the constant influx of new players who are just getting into the game. I think that during Season 2, we focused a little too much on our existing players by adding a ton of new features, whereas in Season 3 we balanced that out a little bit by simplifying the user interface, improving the tutorials and options, and so on.

Naomi: I guess that writing the story tends to be both of these things at once! I'm always thinking about new ideas for episode setups and new things to do with the characters. But I try to remember that the core feature is "having fun with a bunch of cool people running away from zombies" — it's hard to keep that fresh, but I think we're doing OK! 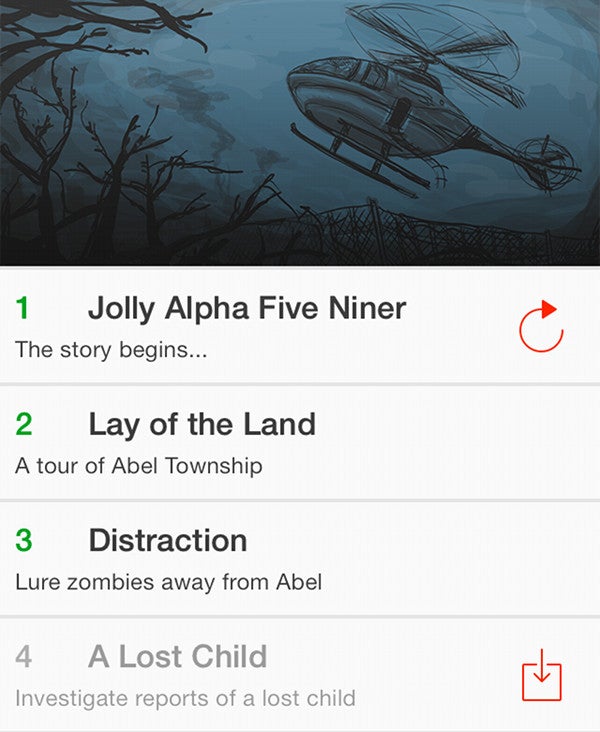 Naomi: Writers, make friends with technologists. Technologists, make friends with writers. We two breeds are not so different. We can make wonderful things together. And a game like Zombies, Run! can be extremely easily utterly ruined by bad writing. And if you think you have a "good story" but cannot tell me the hook for it, you do not have a good story. Honestly, I wish someone else would come along and make a fitness game with a great story! The world's not running out of a need for exercise motivation, and right now I don't know what to tell people when they have finished all 160 missions in Zombies, Run! other than "um, watch Game of Thrones on the treadmill maybe? Iunno."

Adrian: And by "make friends" we don't mean "go to a one-hour speed dating event"; we mean that you should really try to immerse yourself in what constitutes good storytelling in a range of media and to seek out interesting practitioners, and likewise, to understand the capabilities and limits of popular tech like smartphones, and to understand how the development process works.

When Zombies, Run! was launched, I figured we had maybe six months before someone like Nike or Adidas ripped off the concept wholesale. Almost three years later, and still no-one else has even come close. It's like other companies have absolutely no interest in making fitness more fun for normal people; or if they do,they think everyone in the world is either a hardcore running fanatic who wants to crush their friends into the ground, or an uber-nerd who's only motivated by points and progress bars. It's baffling.