At first glance, the Samsung Galaxy Tab S2 resembles a throwback to tablets of old — it’s small, deliberately plain and lacks a detachable keyboard. However, beneath its unobtrusive design lies a great pygmy workhorse that’s perfect for productivity on the go. It’s also one of the thinnest tablets we’ve ever laid eyes on (if you care about that sort of thing.) Read on for our full review!

Android tablets used to be stuck in a weird no-man’s land between productivity and entertainment. By attempting to provide the best of both worlds, they usually excelled at neither. Then came the monolithic displays and laptop convertibles; products that were tablets in name only.

The Samsung Galaxy Tab S2 has a lot more in common with a traditional tablet. This isn’t intended as an insult — sometimes, a lightweight computing device is exactly what a road warrior needs.

Like the iPad, there are two main sizes available: an 8-inch model (that starts at $499) and a 9.7-inch model (which costs a minimum of $599.) Both models come in two variants: SIM or WiFi-only. The former will set you back an additional $150 so our advice is to plump for WiFi and tether the device to your phone.

As its name implies, the Samsung Galaxy Tab S2 is a gentle evolution of last year’s Tab S. It comes with a similar 2048×1536 Super AMOLED display along with a pair of quad-core processors clocked at 1.9GHz and 1.3GHz.

Other noteworthy features include 3GB of memory, 32GB of inbuilt storage, 4G network support for the SIM model (with potential download speeds of 200Mbps) and a fingerprint scanner embedded in the home button. Crucially, it also has decent battery life — the 9.7-inch and 8-inch models promise 12 hours and 14 hours of continuous use, respectively.

Both units run on Android Lollipop although we expect a Marshmallow update will be along at some point. In any event, the OS works fine as is — provided you don’t mind using Samsung’s TouchWiz skin, which we will get to in a moment.

Here are the specifications for both Wi-Fi models (the 4G versions boast additional network support but are otherwise identical):

As the above specs demonstrate, the Samsung Galaxy Tab S2 isn’t a huge technological leap forward from its predecessor — but it sure is prettier. The new build replaces the glass-and-plastic face of the Tab S1 with a striking all-metal finish. It’s gorgeous yet understated, with a choice of two basic colours: black or white. Like we said above, it’s a deliberately plain design that still feels premium. If you’re after a tablet for work, the Tab S2 definitely looks the business. (Do you see what we did there?)

Measuring 6mm at its thickest point and weighing as little as 265g, it’s currently the lightest, thinnest tablet in existence. Personally we’ve never particularly cared about this, but if you happen to own an absurdly small briefcase, the Tab S2 should fit inside easily. 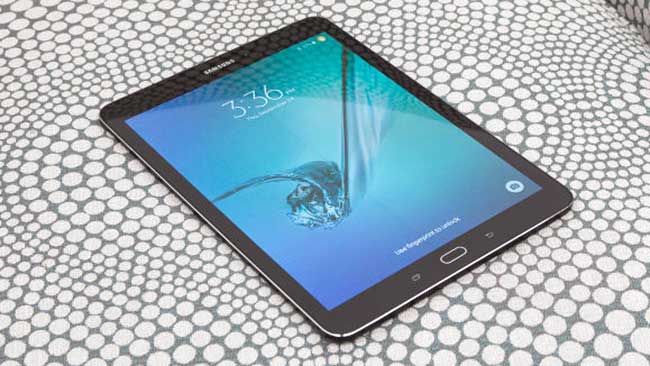 When it came to handling, we had no major complaints about the Galaxy Tab S2. Samsung’s TouchWiz skin has a battered reputation, yet the company has made significant improvements in recent years — it’s still a bit obtrusive and gets in the way of customisation, but as Android paintjobs go there’s a lot to like.

The Super AMOLED display is easily one of the best tablet screens on the market. With a native resolution of 2048×1536 pixels and a pixel density of up to 320ppi, images look incredibly detailed and vibrant. This is how HD YouTube clips were meant to be watched.

The Exynos 5433 processor does a good job of keeping multiple applications zipping along without any hiccups. The OS allows users to split the screen into more than one window which is great for multitasking. This function is obviously better suited to the 9.7-inch model, but the option is there if you need it.

If you’ve ever used a Samsung Galaxy product before (or indeed, any modern Android device), the button layout and menu settings will quickly become second nature. It’s also very reliable — we experienced no software crashes or lagging issues while testing multiple graphically intensive applications; another boon for mobile workers.

The Samsung Galaxy Tab S2 is a minor product upgrade that contains few — if any — surprises. With that said, it remains an excellent proposition for anyone that requires a compact, no-nonsense tablet for everyday computing and entertainment. In short, it’s a tablet for people who just want a tablet. For our money, go for the 9.7-inch WiFi model which provides the best bang for buck.