Taste Test: How Does Coles’ Fake KFC Compare To The Real Thing?

If you’ve shopped at a Coles supermarket recently, you may have noticed something suspiciously familiar in the frozen food section. From the trademark three-letter name and red-lined packaging to the ability to buy family-sized buckets, everything about “SFC” is a blatant rip-off of KFC. (Hell, they even have popcorn chicken!) Intrigued, we snapped up the company’s flagship Take Home Boneless Bucket to see how it compares. Read on for our verdict!

The SFC Take Home Boneless Bucket consists of six “Crispy Fillets” (which are clearly based on KFC’s crispy strips), eight “Southern-Style Dippers” (KFC chicken nuggets) and an assortment of “Pop Pops” (KFC popcorn chicken). You also get a handful of BBQ sauce sachets, with the whole thing coming in a dinky KFC-style bucket. Sadly, there are no frozen chips, so you’ll have to source those yourself.

The whole package comes in at a rather hefty $16.50, which isn’t much cheaper than a freshly cooked family meal from KFC. With that said, Coles regularly runs specials on its frozen food range: we only ended up paying around $8 (which in hindsight, was still way too much).

The SFC Take Home Boneless Bucket claims to be made with Australian chicken breast, a fact that is proudly emblazoned on the box. However, a closer look at the ingredients list tells a slightly different story. 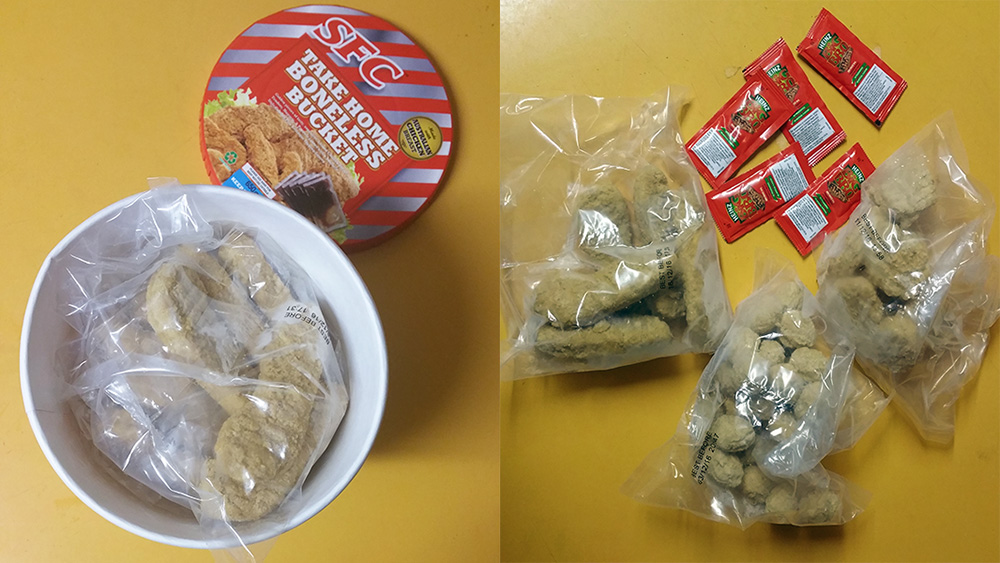 Each piece is made from “reformed” chicken, which is rarely a good sign. Indeed, less than 50 percent is actual chicken meat, with the rest made up of water, salt and “coating” which consists of wheat flour, vegetable oil, salt, wheat starch pepper, yeast extract, dextrose, onion, oregano, nutmeg, paprika extract and raising agents (E450, E500).

The instructions on the back of the bucket recommended using an oven, but what’s that about, eh? To get the full KFC experience, I decided to test half in the deep fryer, with the rest going in the oven as instructed. I also fried up some chips because a KFC meal clearly demands it.

The cooking process was no different to any other frozen meat product. Frying took around ten minutes while the oven-cooking process clocked in at three-quarters of an hour. Once everything was good to go, I chucked it all back into the included bucket. (This probably isn’t advisable considering it was used to store raw chicken. But whatevs. I’m still here.) 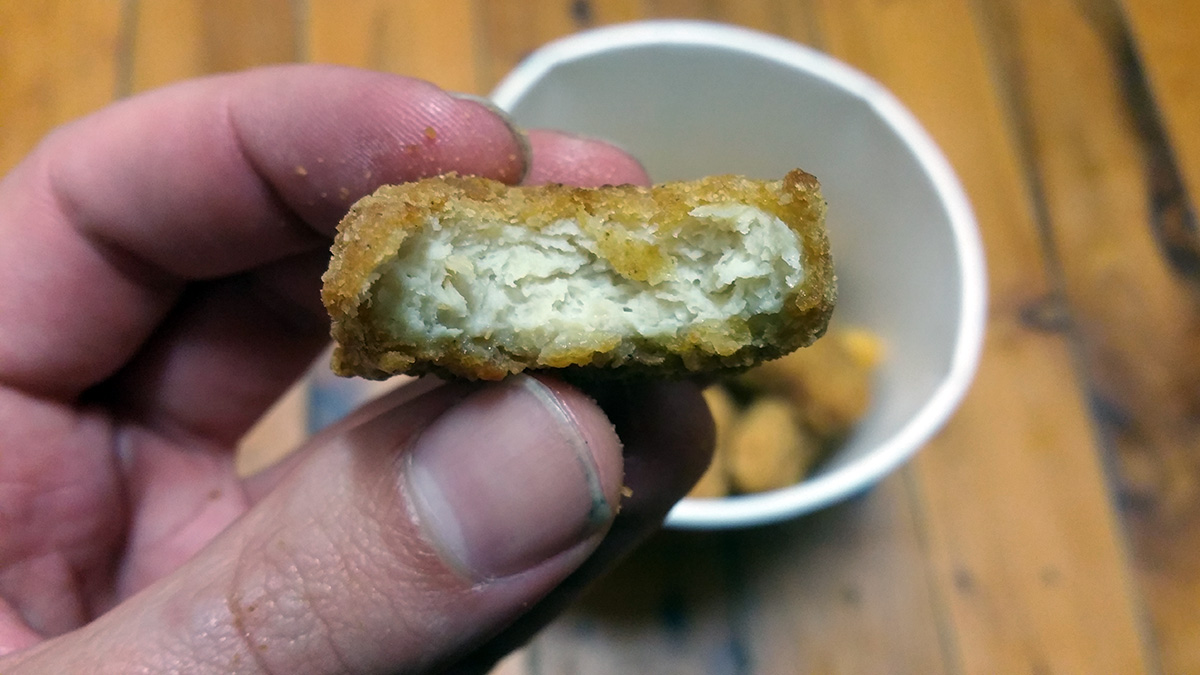 So how did it taste? In a word: terrible. Have you ever had dinner at a ghastly hotel pub where the fish fingers, chicken nuggets and schnitzel all tasted exactly the same? That’s what the SFC Take Home Boneless Bucket reminded me of. Everything has that grainy, synthetic taste that ultra-budget mince meat suffers from.

The oven-baked and deep-fried versions were equally awful. I abandoned the meal after one chicken strip and a handful of nuggets. Life’s too short for “chicken” that tastes this cheap.

Say what you will about KFC; at least the company uses fresh, high-quality chicken for the asking price. We witnessed this first-hand during a tour of one of its kitchens: its breast fillets are unfrozen and freshly battered in store. 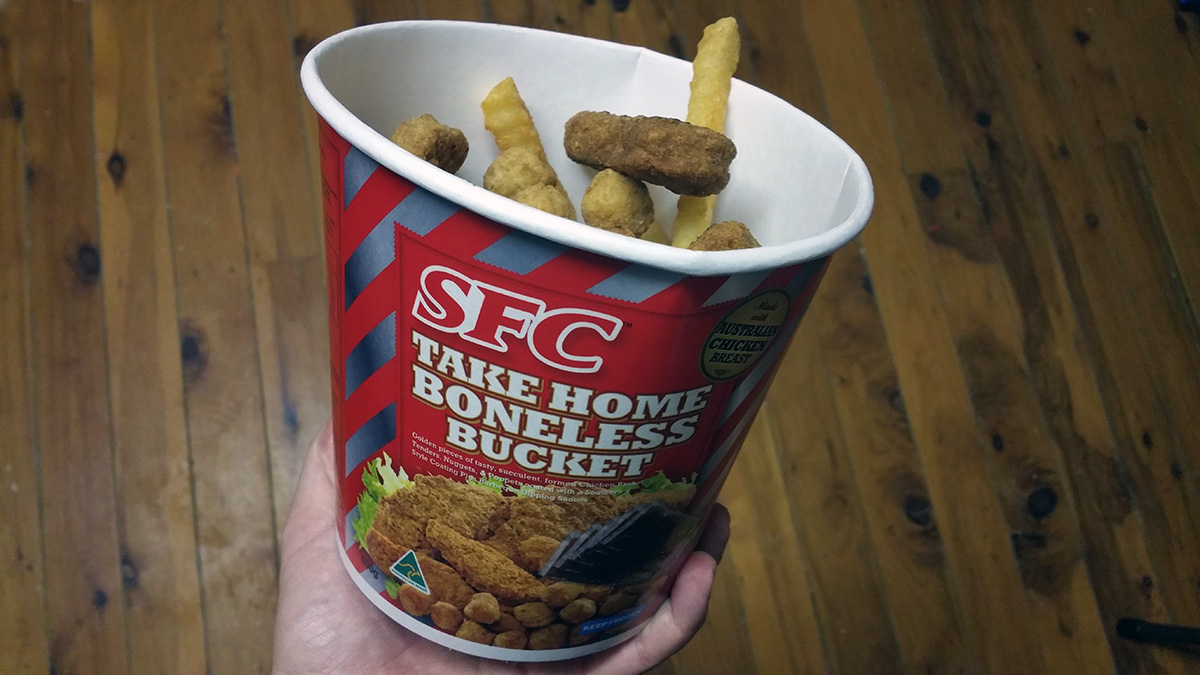 By contrast, SFC’s boneless offerings are just nasty. You’d be vastly better off flouring your own chicken fillets and popping them in the fryer. Or just go to KFC.