Today, KFC officially launched the Original Tender: its first new permanent chicken product in nearly 15 years. As the name implies, Original Tenders are boneless strips of chicken breast flavoured with KFC’s Original Recipe. Last week, we served a bucket to our co-workers to find out what they thought of the new product. Read on for the full Allure Media verdict.

As part of a major restructuring of its menu, KFC is making Original Tenders a permanent menu item in all 620 restaurants nationwide. The last time KFC embarked on a roll out this ambitious was with Popcorn Chicken all the way back in 2000. So what makes this product so special? Apparently, the decision was buoyed by customer demand for more boneless products.

Each Original Tender comprises a strip of marinated chicken breast double breaded in the Colonel’s secret herbs and spices. They also come with a new aioli dip.

Essentially, the Original Tenders are a premium take on Crispy Strips. The chief difference is that the chicken is breaded fresh in store using KFC’s flagship herbs and spices. (Fun fact: this required KFC to install extra breading stations in most of its restaurants to cope with the extra workload.)

A single Original Tender packs in 619kJ of energy, 10g of fat, 5g of carbohydrates and 439mg of sodium. This is slightly healthier than a regular piece of Original Recipe Chicken which has an average kilojoule count of 900kJ. (The tender is noticeably smaller, but there’s also no bone.)

Now that the introductions are out of the way, let’s take a look at how they taste. Below are the verdicts of me and my colleagues.

(Incidentally, I think my co-workers suspect I’m trying to kill them — literally one day after force-feeding them Pizza Hut’s Chillidog and Cheesydog pizzas, along came these bad boys. Allure Media is a dangerous place to work for.) 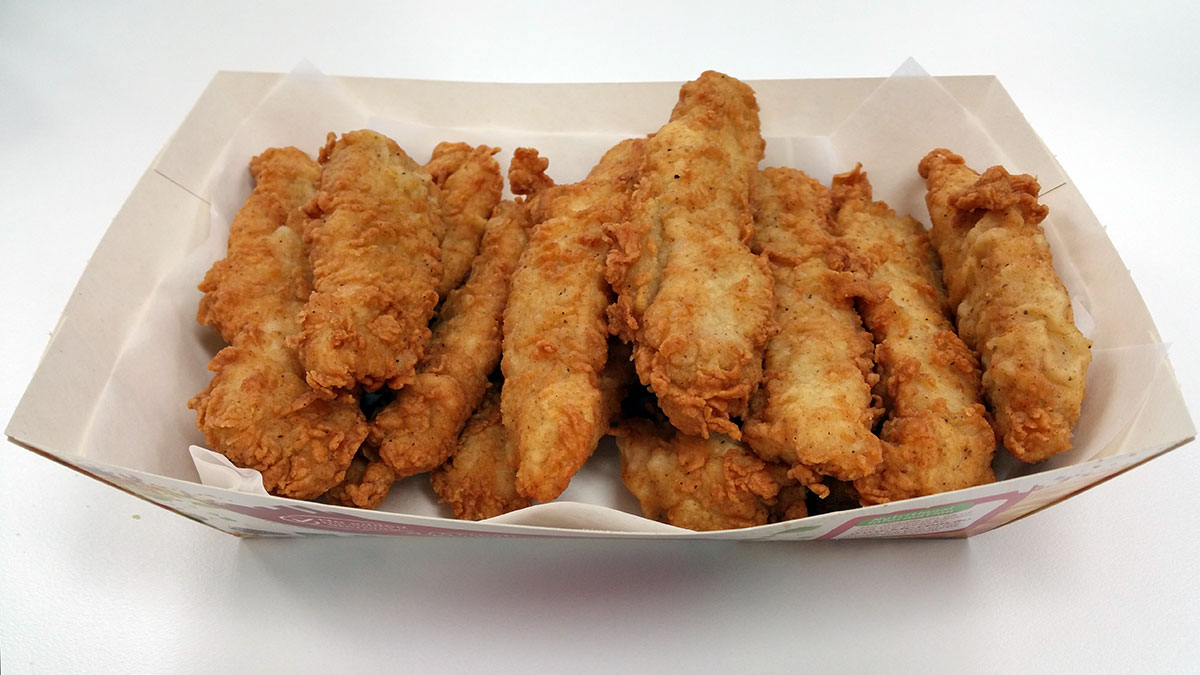 Chris Jager, Lifehacker Editor: “Y’all know me. Know how I earn a livin’. The concept of boneless original recipe chicken is the fabled “white whale” that fast food aficionados have been obsessing over — a perfect piece of KFC that can be enjoyed with one hand without any compromises.

“Personally, I think they nailed it. It’s certainly a fuller, more flavoursome snack than the crispy strip. The included aioli helps to keep the saltiness level down although I think I’d rather something a bit hotter. A few of these paired with sriracha or Zulu fire sauce would be heavenly. With that said, I think there’s still a place for boned chicken on KFC’s menu. Sometimes you just want something carcass-like that you can dive in and attack with both hands. But all in all, a solid effort. 9/10”

David Boldeman, National Sales Director: “KFC chicken. It’s always good. You know it’s unhealthy but when it’s on offer you just can’t say no. This time the Lifehacker pod brought me free boneless chicken. How would it compare to the original chicken piece that you know from the morning following your last massive night out with the boys?

“Pretty good, matter of fact. It felt a lot more natural and not as greasy as the regular stuff. Delivered on the taste and the skin was exactly what you’d expect. Felt healthier for some reason. Whether that’s actually true I have no idea, but I’ll go on trying to convince myself that this was a healthier piece of KFC chicken.”

Rae Johnston, Commercial Editor: “This is what I’ve been waiting for. More chicken, great classic coating, less annoying bones to get in the way. And Aoli! Are KFC reading my thoughts? I ate three and have no regrets. Would break diet for/10.”

Matt McDonald: “A pretty standard strip, less greasy than the regular pieces they sell though. After lunch bonus chicken is always going to go down well – 7/10”

Genevieve Rota, POPSUGAR News and Entertainment Editor “No exaggeration, this chicken is my dream. I’ve always loved the taste of the KFC coating but I could never eat it because chicken with bones in it is NOT my thing. I’ve said for years I wish the chicken came in boneless form and now here it is, just as delicious as I wanted it to be! It’s a happy day for me, truly.” 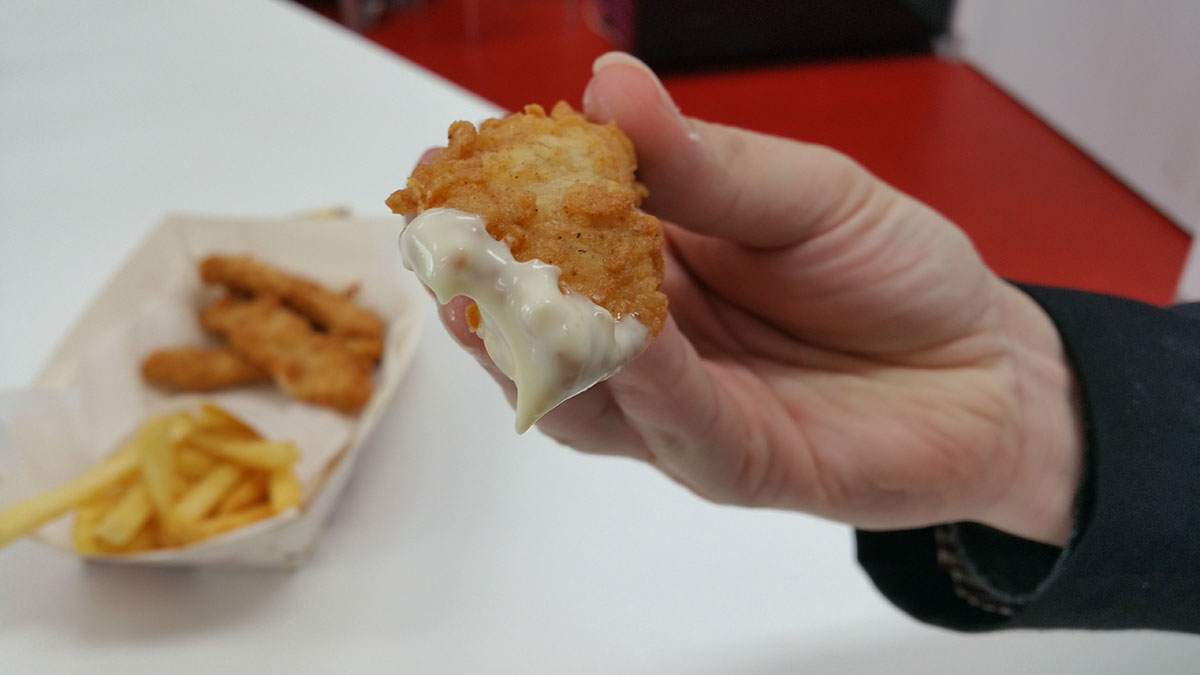 Shanya Buultjens, Designer: “The chicken was really tender! The batter was a bit soggy but sooooo flavoursome! I’m totally craving more KFC now! The accompanying sauce was a lot better than the majority of KFC’s standard sugary-sweet sauces. From what I remember of the chicken tenders (I think that is what they were called), they were dry and the batter wasn’t that great.”

Haoran Un, Senior Developer: “The distinctive taste of the 11 secret herbs and spices are abundantly apparent, which is why you’d choose KFC over any other form of chicken. The flavour is far better than the standard crispy strips or nuggets. However, as one might expect from a straight piece of breast meat, it’s a tad on the dry side. The garlic aioli sauce helps a bit, but the strong flavours in the aioli compete with and distract from the strong flavours of the herbs and spices. 7/10.”

Paul Colgan, Business Insider Australia Editor: “I was in the middle of eating a pretty good chicken burger when the KFC boneless chicken showed up in the office. I went straight in for a piece. Eating this alongside ordinary mortal chicken serves as a great reminder of how KFC elevates pieces of chookmeat to an almost transcendent experience. I enjoyed it, but for me it’s missing one of the key elements of eating KFC in hoovering all the good bits off the bone structure of a thigh or breast. Good snack but I’ll be sticking to my regular three-piece meal.”

Jessica Chandra, “Is this new? I don’t even care – it’s so good. I like my chicken bone-free because it’s a million times easier to eat, so this is a real treat. Is the main difference between these and the chicken strips the outer coating? Like do the chicken strips have a crunchy batter? Doesn’t matter – it’s still delicious.”