I’m Patrick Norton, Host Of TekThing, And This Is How I Work

For years Patrick Norton has been a familiar figure to computer nerds everywhere, dispensing cheerful commentary and advice about the latest tech news and gear. You may know him best from his time at Tekzilla; personally I first watched Patrick as host of The Screen Savers back in the good old days of TechTV.

Nowadays Patrick is as busy as ever, hosting and producing his new show TekThing, among a dozen other projects he’s involved with. How’s he do it all? We caught up with Patrick to learn a little about how he works.

Location: NorCal. Mostly Alameda & Richmond, CA. Current Gig: Host/Producer for TekThing, TWiCH (This Week in Computer Hardware), and Possibly Unsafe. And, as of this morning, Hak5’s Threat Wire. I also have the privilege of writing for Tested.com. One word that best describes how you work: Feral. Current mobile device: iPhone 6. I did it for the camera. Otherwise I’d still be rolling with my Moto G 4G. (Camera sucks, but that phone is a bargain!) Current computer: Um, how much space do we have? My primary machine is a Dell XPS 13 laptop (2013 model, tho the new 2015 models are sweet!) In the last 24 hours, I’ve written, rendered video, or tested products on a home-built Pentium G3220, a Vizio All-in-One (w/a Core i7), a MacBook Air, and an overclocked Core i5 desktop with 16GB RAM. Should I count the Raspberry Pi 2 while I’m at it? 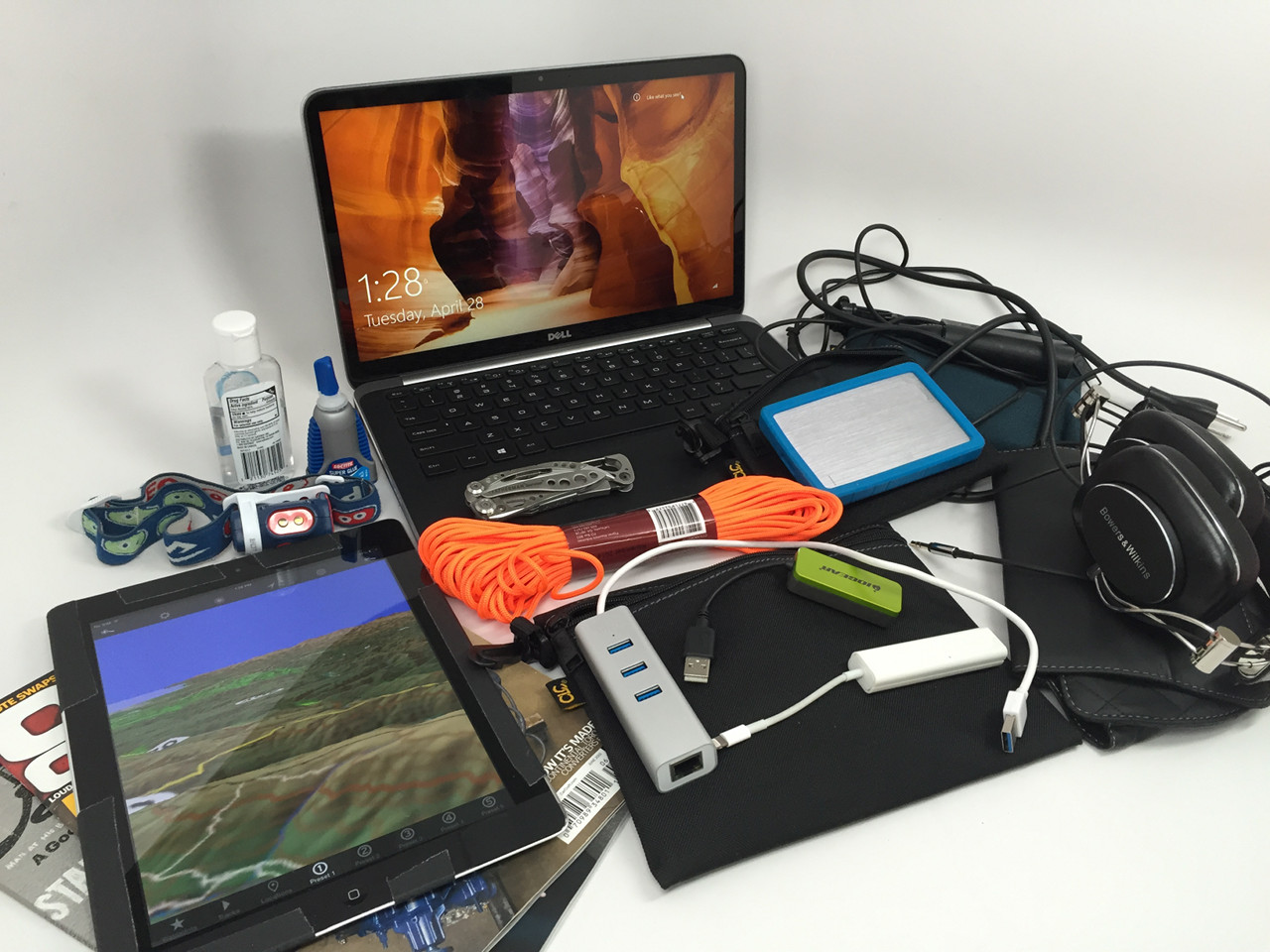 What apps, software and tools can’t you live without?

It’s rare to see me without my phone and a Kershaw Blur (folding knife) tucked in my pocket. There’s always an Anker 2nd Gen Astro3 12800mAh external battery in my pack, along with a Leatherman Skeletool, an external HD, and a small pile of SanDisk thumb drives and MicroSD Cards, and a minor pile of cables for everything.

Patreon.com has been amazing. Not just for Shannon and I on TekThing, but Tom Merritt on DTNS, Brian Brushwood and Justin Robert Young’s NightAttack, and Anthony Carboni and Jeff Cannata’s We Have Concerns. The whole crew behind The Comedy Button. “Like what we do? You can pay us, and we’ll actually be able to afford to make it for you!” Sounds like a tip jar, but it’s way beyond.

Google owns most of my professional life… Gmail, Docs, Calendar, Sheets, it handles most of my collaboration on scripts, scheduling and, duh, mail. It’s embarrassing to admit, but I still write most of my work in WordPad until I move it to Docs. (It’s a horrible tool; old habits are hard to break.) I’m starting to use LibreOffice again ’cause, frankly, editing spreadsheets in Google Sheets is not my favourite.

My entire professional life, plus whatever I need when I’m in Full Dad Mode (diapers, wipes, spare clothes, sedatives) gets stuffed into a GORUCK pack I picked up cheap at one of their War Stories and Free Beer gatherings. I suspect the pack will outlast me… 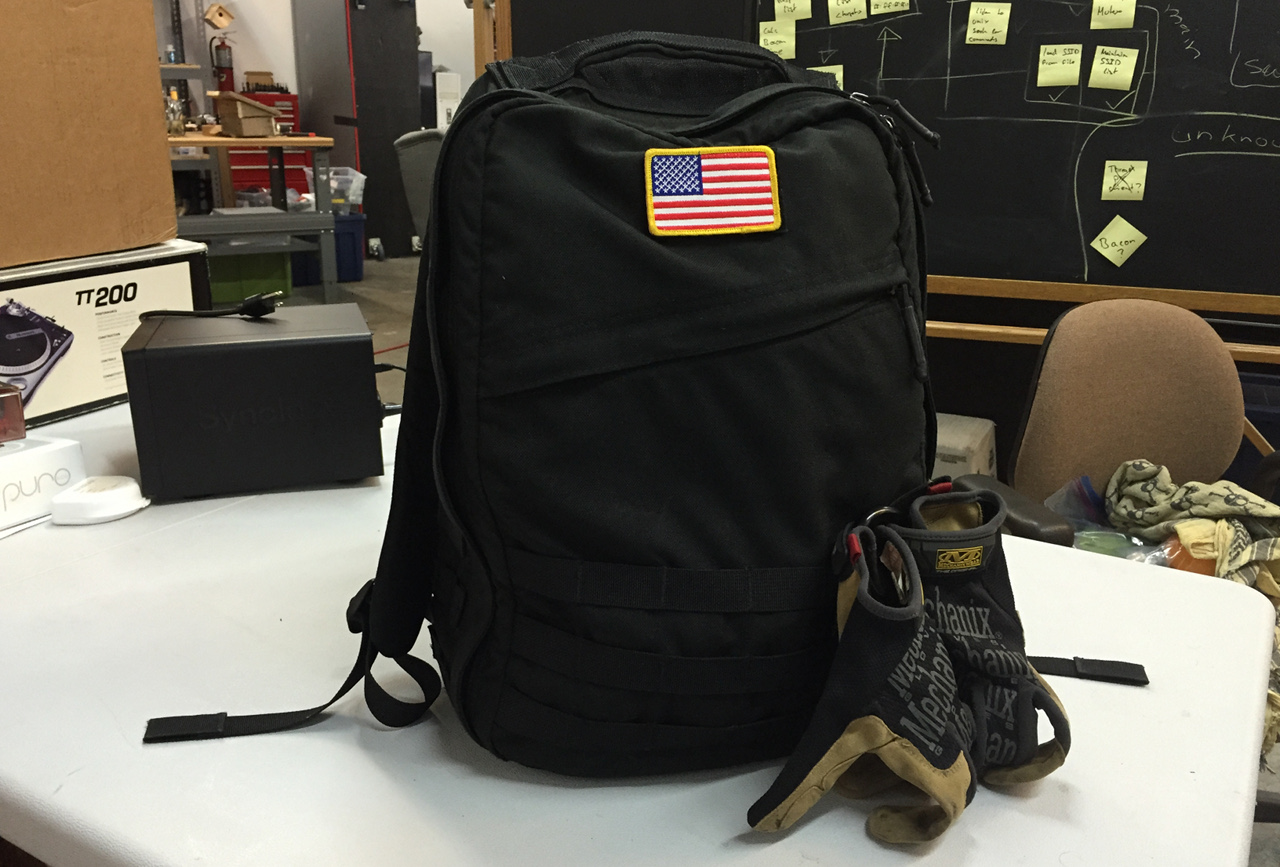 The real work gets done in the studio in the Hak5 Warehouse. (The Hak5 crew makes it available for Shannon and I to use for Tekthing. Thank you!!!) It’s your classic TV mess of lights, cameras, mics and mayhem. And cables. So many cables.

That said, for every hour of TV, there’s hours of prep, mostly writing, that doesn’t take place in the studio.

I’d like to tell you about my carefully composed working environ… a top tier standing desk, centered at the focus of a tremendously green lighting array in my dedicated home office… but Darren (of Hak5 fame) just found me sitting on the floor the middle of the warehouse typing on my laptop ’cause I needed a break from my desk.

I’m the ‘anywhere anytime’ kind of writer. If I can open my laptop, I’ll probably get some work done. My wife thinks I have an unnatural attraction to working at our kitchen table. In the past month I’ve written scripts and columns in the front seat of my car (while parked), a folding table I dragged into the entrance of the warehouse, coffeeshops, diners, an Amtrak train, and at our kitchen table — at least after the kids are asleep.

Personal fave: a Google Hangout for TekThing patrons from the passenger’s seat of a car driving down to the iFixit headquarters.

I do actually have a desk where I spend a big chunk of my days with a Dell U2713H WQHD UltraSharp monitor (I’d have a 4K UltraSharp if my pockets were deeper) typing on a IBM Model M. The desk is some kind of recycled IKEA thing wedged in between a MORN MT3050D Laser Engraving and Cutting Machine and the studio table where the Hak5 shop takes product photos on a wee MyStudio infinity background. 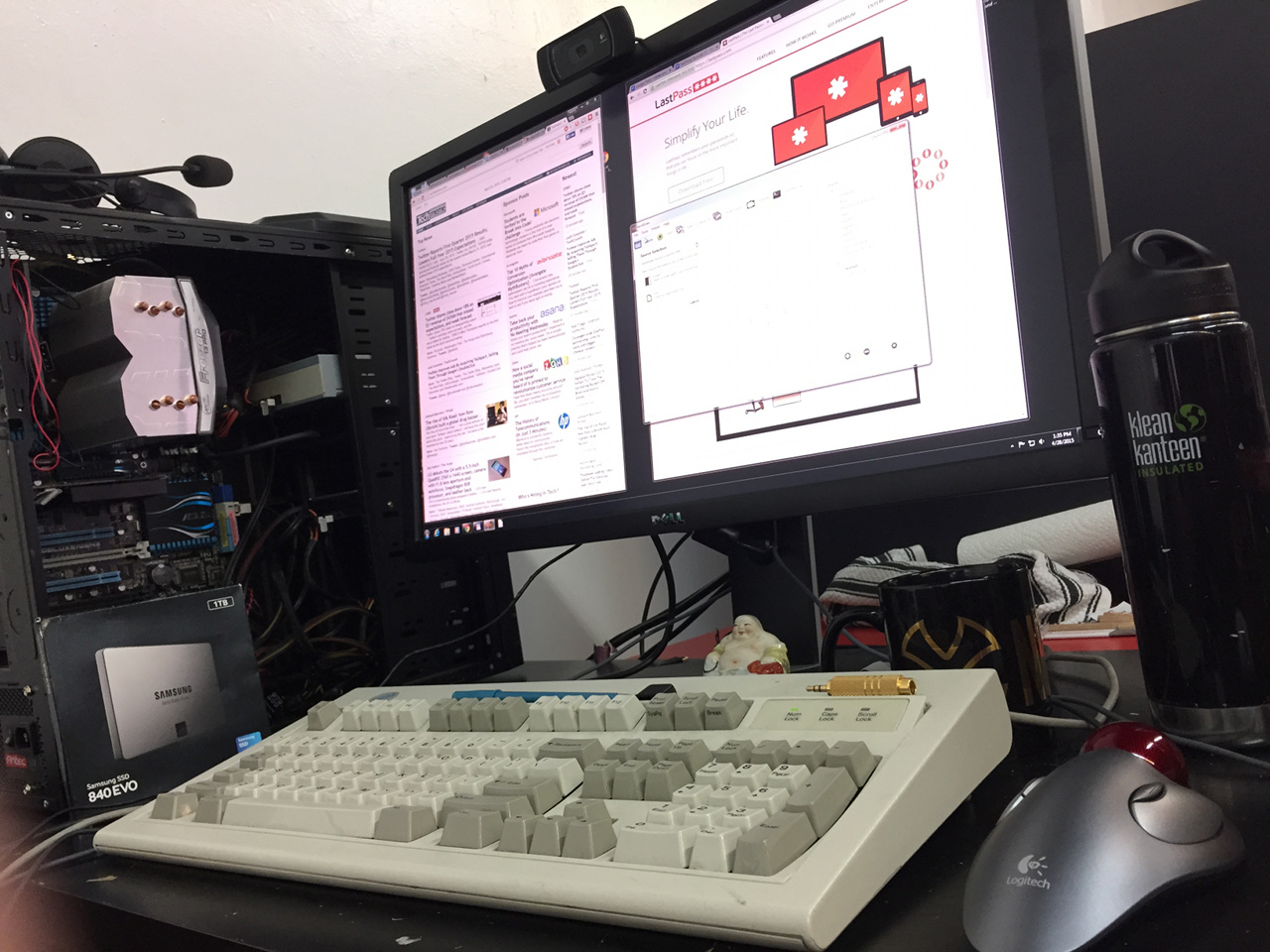 Single-tasking. A lot of what I’m doing these days, whether it’s product testings or talking with potential advertisers can’t really be automated. Figuring out the most important thing I need to do next, and finishing it… that’s key for me.

Oh, almost forgot! LastPass is my new best friend. No more typing in passwords! I’m collaberating with a half dozen people, and a password manager makes my life a lot simpler and more secure. (Unless, of course, it gets compromised.)

I’m a serial ToDo list maker… one of the most productive people I’ve ever known still does a daily list on a yellow legal pad. It’s not a luddite thing, they just find it more efficient. I’m migrating all my project lists to Wunderlist. Harder to lose than that legal pad!

Headphones (Bowers & Wilkins P7 and Sennheiser Momentum are in my bag right now) and an insulated Klean Kanteen for my coffee. I’ve been using an HRT i-dSp DACs with my iPhone to play audio. My pocketknife stays with me even when I leave my phone behind.

My wife is amazed by the stains I can get out of laundry. I’m a pretty ok mechanic too, especially when things get ugly down in Baja.

I’ve been moderately obsessed with Spotify for the last couple months, in part because playlists like Intense Studying and Bluegrass have exposed me to some new artists… they’re both on heavy rotation. So is the 100 Greatest Punk Songs of All Time. I also keep a collection of Punk, Reggae and Motown on tap at all times… last I counted I think there were 700 or so CDs in my collection ripped to lossless.

There are too many magazines to list! I can’t wait for the latest edition of Saga, I’ve just been completely sucked into that comic. The two books on the top of the pile I’m reading (it’s a big pile) are American Buffalo: In Search of a Lost Icon and Loose Woman, a collection of poems by Sandra Cisneros. I live on the web. Techmeme is something I check constantly. As a misguided literature major, I keep looping back to Poetryfoundation.org. And, hey, not to suck up, but I spend a lot of time on Lifehacker!

[I also] just re-read half of Neil Gaiman’s American Gods this weekend, and picked up The Water-Wise Home, a great book on “greywater” recycling by Laura Allen (cofounder of Greywater Action) and Brad Lancaster’s 2nd edition of Rainwater Harvesting for Drylands and Beyond.

Are you more of an introvert or an extrovert? Maybe both.

For somebody that makes their living on camera, I spend a lot of time watching people from the edge. That said, my father made sure I knew how to walk up to strangers and ask questions. It was a sales survival thing.

A major road trip to some kind of Big Nature, preferably in the middle nowhere in Utah or Nevada is killer, but a couple hours to watch a movie uninterrupted is pretty amazing! And I read constantly.

I was pretty nocturnal until my first child was born. Now I’m so far behind on sleep I’m ready for a nap at all times. There’s no alarm clock in the world like a 30 pound toddler.

“You have the chance. Just. Say. Something.” “Limit downside risk” was a big one from my Dad. That, and “keep it simple stupid.” Mum’s always good for a “if you’re gonna be dumb, you better be tough.”

Above: The latest episode of TekThing.