You Should BBQ Homemade Pizzas

I don’t know if it’s the Dunham association or the mundane bleakness of that particular line, but that dumb show cast a pall over the concept of grilling pizzas for me for many years. This is obviously very silly, because grilled pizzas are very fun to make and eat. (I wish I could control my brain, but all I can do is limit its HBO consumption, which I will not do.)

Grilling a pizza can be slightly stressful if you’ve never made one before. The best grilled pizzas are made with a very hot BBQ, and pizza dough browns quite quickly. But just as I am no longer allowing the HBO show “Girls” to deter me from enjoying pizzas hot and fresh from the grill, you are not going to let fear deter you. Adopt a few good pizza grilling habits now, and you will be rewarded with beautiful barbecued pizzas for years to come.

Let your dough warm up a bit 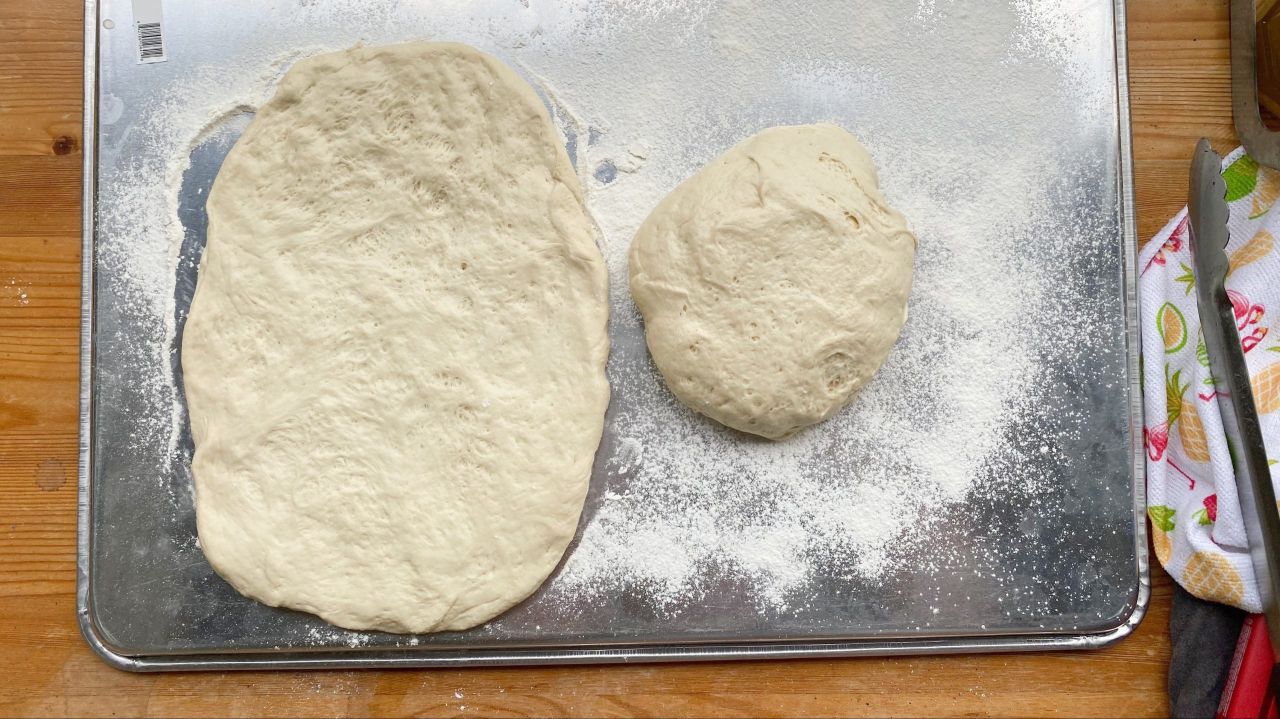 I like to take my dough — which, I will be honest, is usually store-bought — out of the fridge about half an hour before BBQ time, to make it easier to stretch and shape without tearing. (I did not do this the first time I made grilled pizzas, and those pizzas were riddled with little holes.) If you’re making more than one pizza, take the second ball of dough out of the fridge about 15 minutes after the first one, otherwise it will get too warm, which will make it quite hard to slide onto the grill.

Once your dough is warmed a bit, stretch it slowly, rotating with each stretch, and stop if it starts to look translucent in spots. Take your time! Be nice to the dough! It is the backbone of this entire operation. 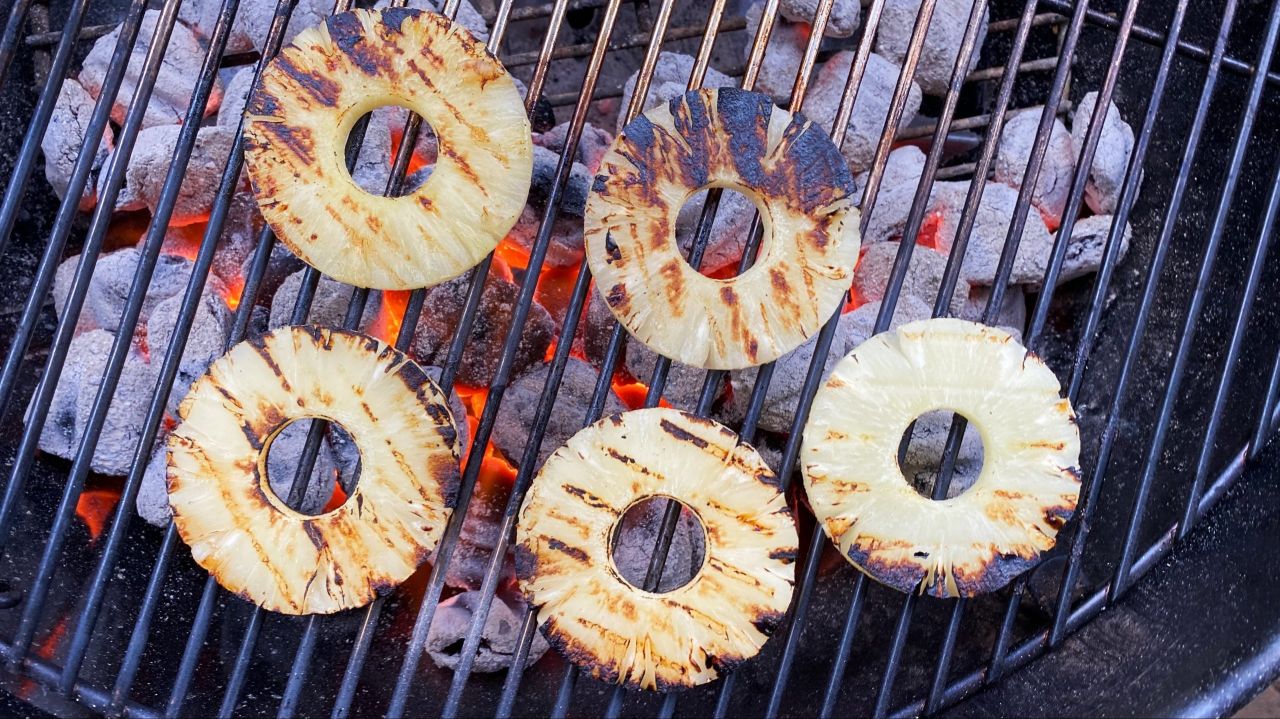 With the exception of cheese and already (usually cured) cooked meats, any topping that needs to be cooked, browned, or otherwise have its flavour developed by heat needs to be cooked or browned beforehand. Mushrooms, for example, simply will not have time to lose their moisture and properly brown during the pizza-cooking process, and garlic will not get the chance to mellow.

Sausage, chicken, and other raw animal proteins obviously need to be cooked, but so do vegetables, mushrooms, and — if you’re a freak like me — pineapple. Grilling pineapple gives it a smoky, caramelised quality, and brings out deeper flavours that vibe really well with the whole grilled pizza experience. Paradoxically, I do not grill the meat that I pair with the pineapple. Instead, I drape thin slices of cold prosciutto over the hot pizza, which tastes really good but also protects the roof of your mouth. 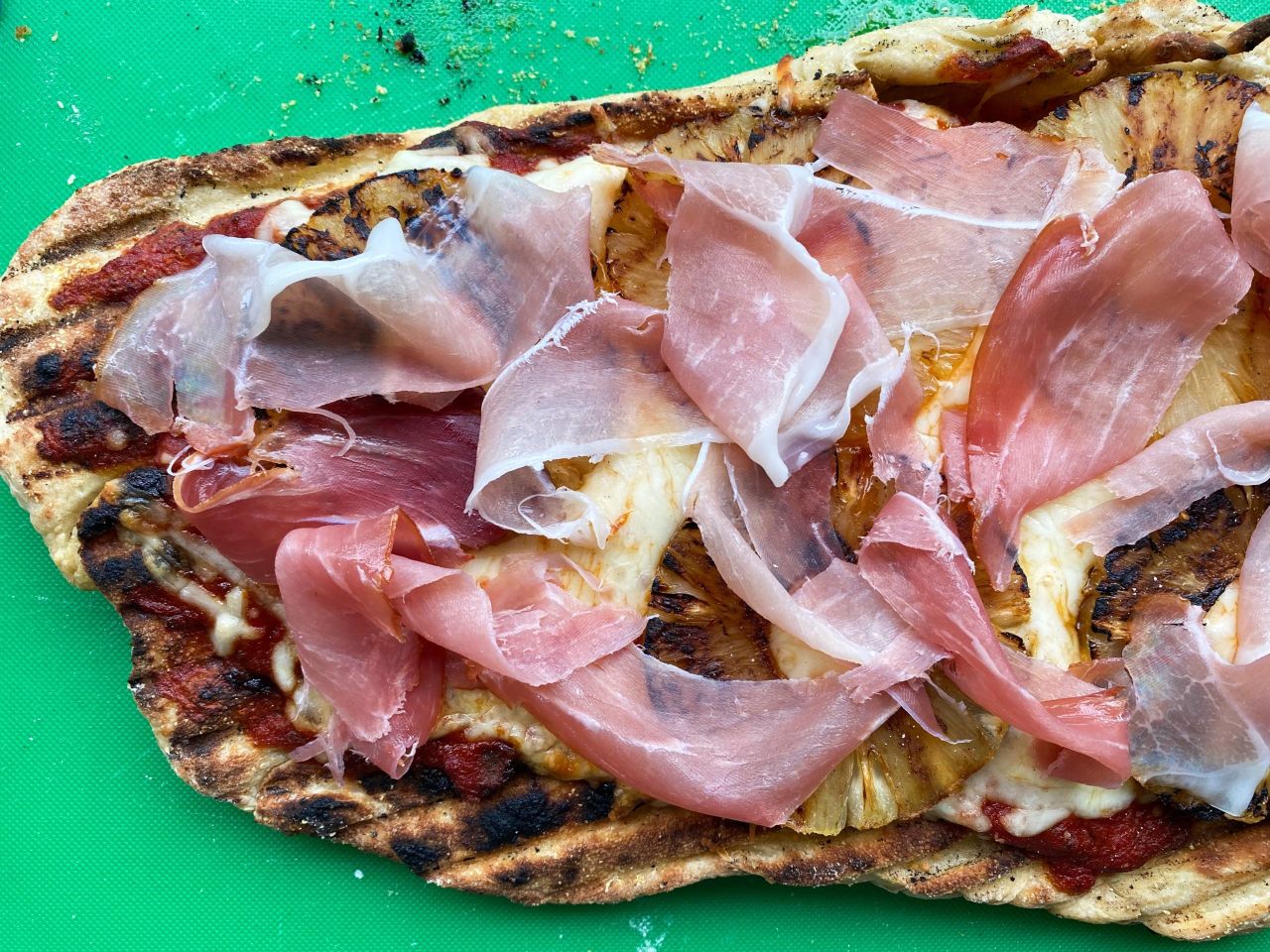 Really think about the flavours you want to get out of each topping, and coax those flavours out of them before you sprinkle them on saucy dough. (Or, in the case of something like prosciutto, leave it out of the cooking process entirely.)

Also, be careful not to overdo it. Two toppings, plus cheese is plenty — more will make your pizza heavy and damp.

I don’t want to stress you out, but grilled pizzas favour the (at least somewhat) prepared. Setting up a mise en place will actually make the process less stressful overall. In addition to pre-cooking any toppings, you’ll want to make sure you have your sauce, cheese, olive oil, and all toppings laid out next to your BBQ. You’ll also need a ladle or large spoon (for the sauce), a pastry or basting brush (for the oil), and a really big spatula (or pizza peel) and some tongs. I also like to set out a little bowl of cornmeal for dusting on the bottom of the pizza.

Having everything prepared means you can work quickly and effectively, but if you still find yourself a little frazzled, take a page out of Deb Perelman’s blog and take them off the grill after the first side is browned:

One of the most common things I’ve read about grilling pizza, and what used to be my least favourite thing about it, is that you have to be hyper-organised and ready to work quickly. I disagree; I grill the first side then, if I don’t have enough space to spread out outside, take it back inside, top all the pizzas at a normal pace — set the table, toss the salad, etc. — and finish grilling them when we’re ready to eat.

Once you’ve gotten used to the pacing, you can do the whole thing on the BBQ, or you can keep doing it Deb style forever. No one will judge you, especially if you are feeding them pizza.

You can make your own dough and sauce — Smitten Kitchen has excellent recipes for both — but there is no shame in outsourcing it, particularly when you’re getting the hang of the process. Nearly all major grocery stores sell fresh pizza dough (look for it in the freezer section if you can’t find it refrigerated).

Get that grill hot 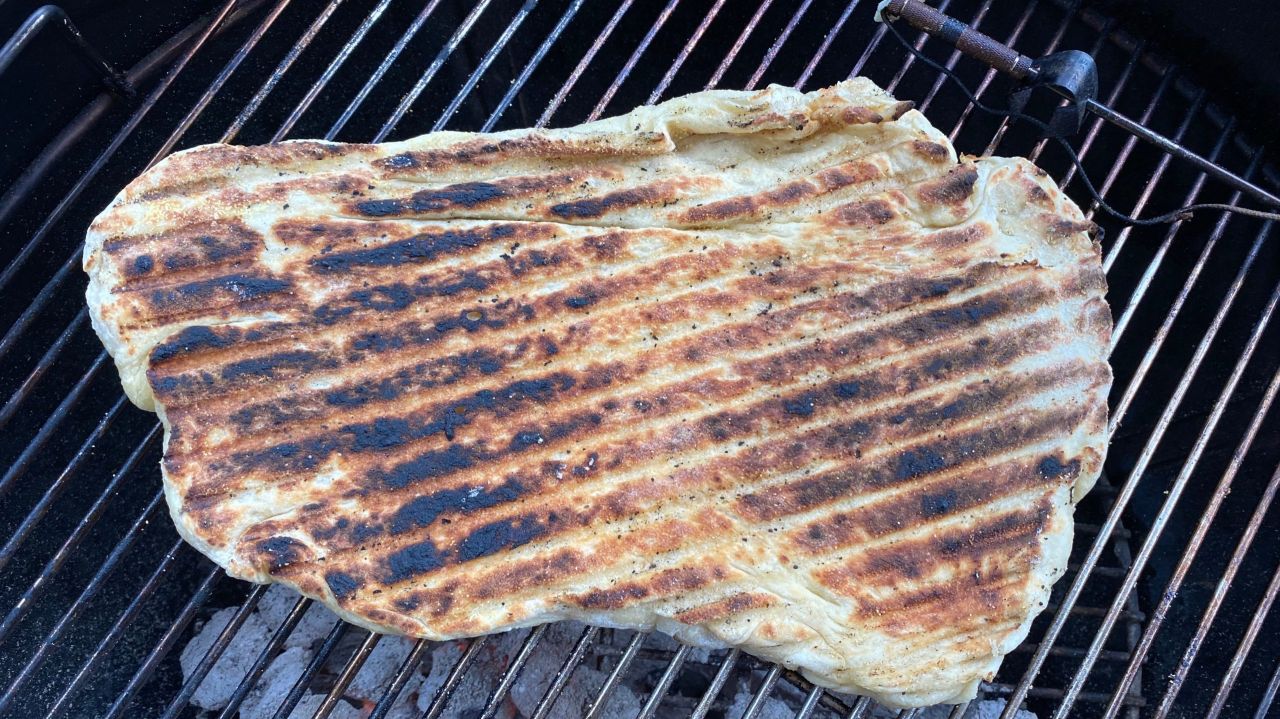 One of the great things about cooking pizza on BBQ grates is that you can reach super-high temperatures in a short amount of time, and you are outside, so you don’t have to blast your home with heat from your oven. A too-cold grill will produce pizza that’s doughy, and no one wants that, so crank it up. You’ll want to set up two zones of heat — direct and indirect — with a bunch of hot, glowing coals on one side of the grill (or the burners turned to high on one side, if using gas).

You’ll use the direct side to quickly sear both sides of the dough, which will kick start that cooking process, help a few bubbles form, and get a bit of char on the outside. (You don’t want the entire crust to be bubbled, but you can prick the centre of the pizza with a fork ahead of time, or just poke the bubbles as they form.) 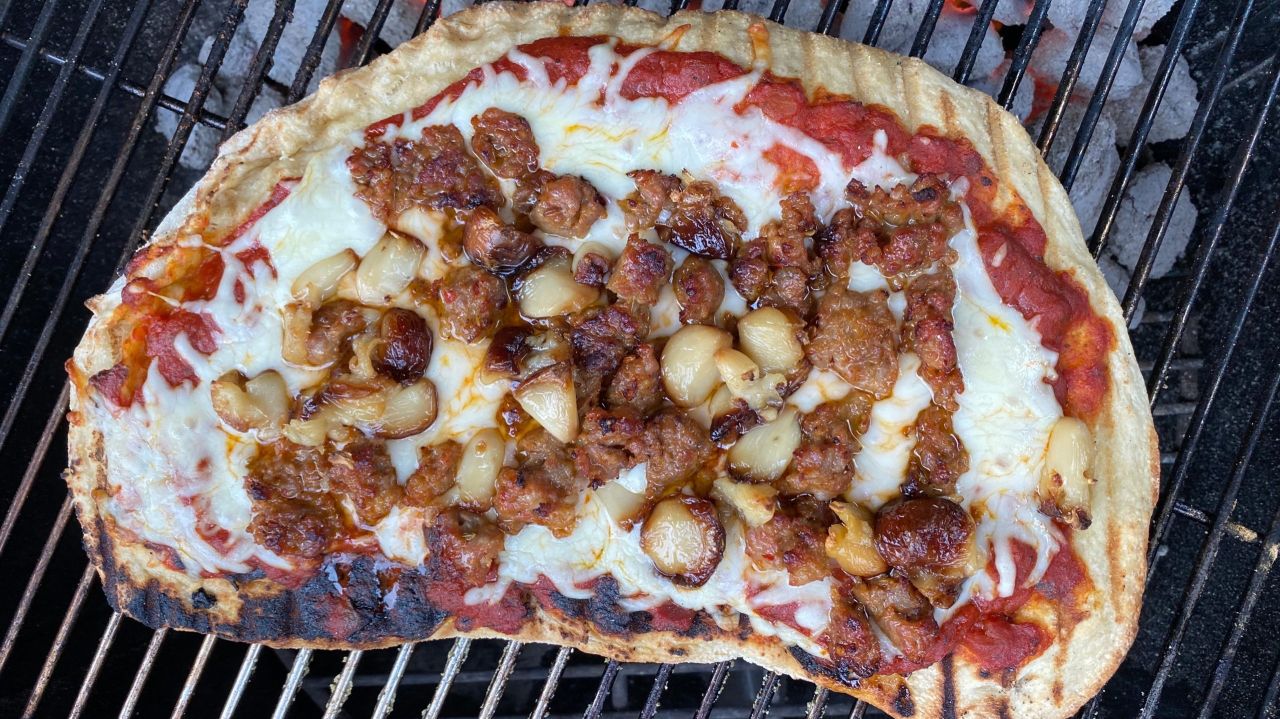 To make grilled pizzas, you will need:

About half an hour before BBQ time, take your dough out of the fridge and set it on a flour-dusted surface. I use a large upside down baking sheet, because it’s easy to carry outside, and I can slide the dough directly from the sheet right on to the grill. (You can also use a pizza peel or lipless baking sheet.)

If using a charcoal grill, fill your chimney and get it going. Once the coals are partially ashed over, dump them on one side of the grill, set the grill grate on top, and open up the top and bottom vents fully and completely. A temperature of around 260C is ideal, and 230C is ok, but keep in mind that the temp is going to drop as you cook pizzas, so start on the higher side. If you’re using a gas grill, set your burners accordingly. (Use an external thermometer to monitor the temperature, no matter what kind of grill you’re using.) 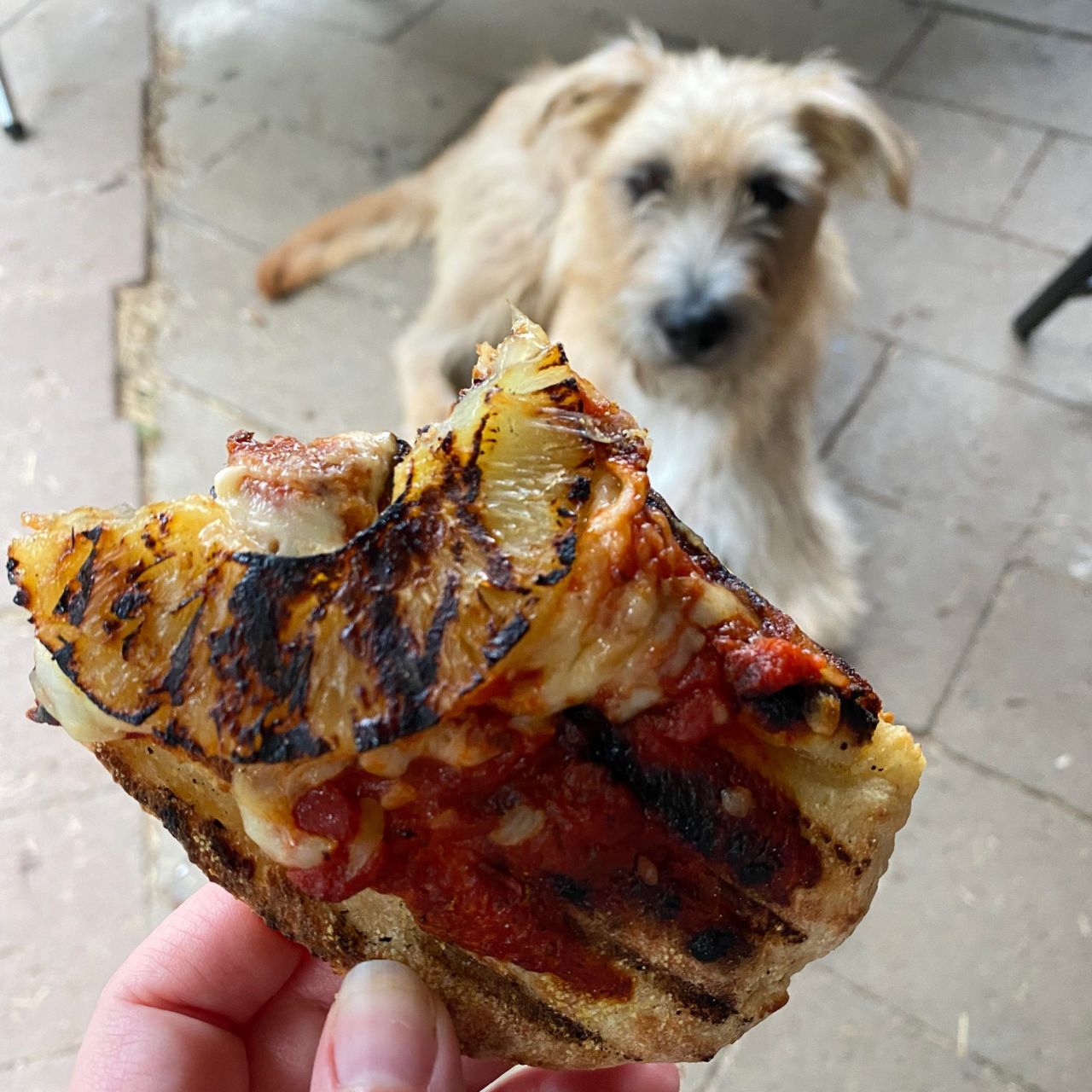 Stretch your dough out to a 10-12-inch, circular kind of shape, and do not worry if that shape is not perfectly round. My pizzas are usually shaped like kidneys or the state of Alabama, and that is part of their charm. (Owning a pizza peel would probably help keep the shape during transfer, but I have not bought one yet for unknown reasons.)

Brush one side of the dough with a thin coating of olive oil, then slide and flip the dough (oiled side down) onto the grates over the coals (or flames). Leave the grill uncovered and let it cook for about a minute, until it starts to bubble and you smell a little scorching (which is good). While it’s cooking, brush the top (which is about to become the bottom) with olive oil and dust it with cornmeal.

After about a minute (at the most), flip the dough over and sauce the top with a single ladle of dough (more will make the pizza soggy), sprinkle on the cheese and the rest of your toppings, then slide the whole thing over to the indirect-heat side (the side with no coals), close the lid and let it cook until the cheese has fully melted, about five minutes. (You can check on it after a couple minutes if you’re nervous, but your nose is your most reliable tool — if it smells like it’s burning, it probably is.)

If you want a little more char on the bottom of your crust, just slide it back over the coals for another minute. If you want the cheese a little more browned — one thing the grill doesn’t do so well — hit it with a kitchen torch. (You could also use your broiler, but that would bring some of the heat inside, which I’m sure you don’t want, at least not right now.)