You Can BBQ a Frozen Pizza

I have never been and never will be “above” eating a frozen pizza (once cooked, obviously). They are convenient. They are tasty. They are customisable. But cooking them has a way of heating up your kitchen, as they need a good bit of heat to get all browned and bubbly. There is, luckily, another scorching heat source that cooks up frozen pizzas just as well — if not better — than your oven, and it’s located outside, which is already hot. That’s right, I am talking about the BBQ in your yard.

Grilled, frozen pizza has all the makings of an easy but oddly special-feeling weeknight supper. You can grill multiple pizzas, one at a time, and eat the first at a leisurely clip while the next one is cooking. BBQing a pizza from frozen to hot and crisp takes all of 20 minutes, and the pre-heat time is markedly shorter than your oven’s. 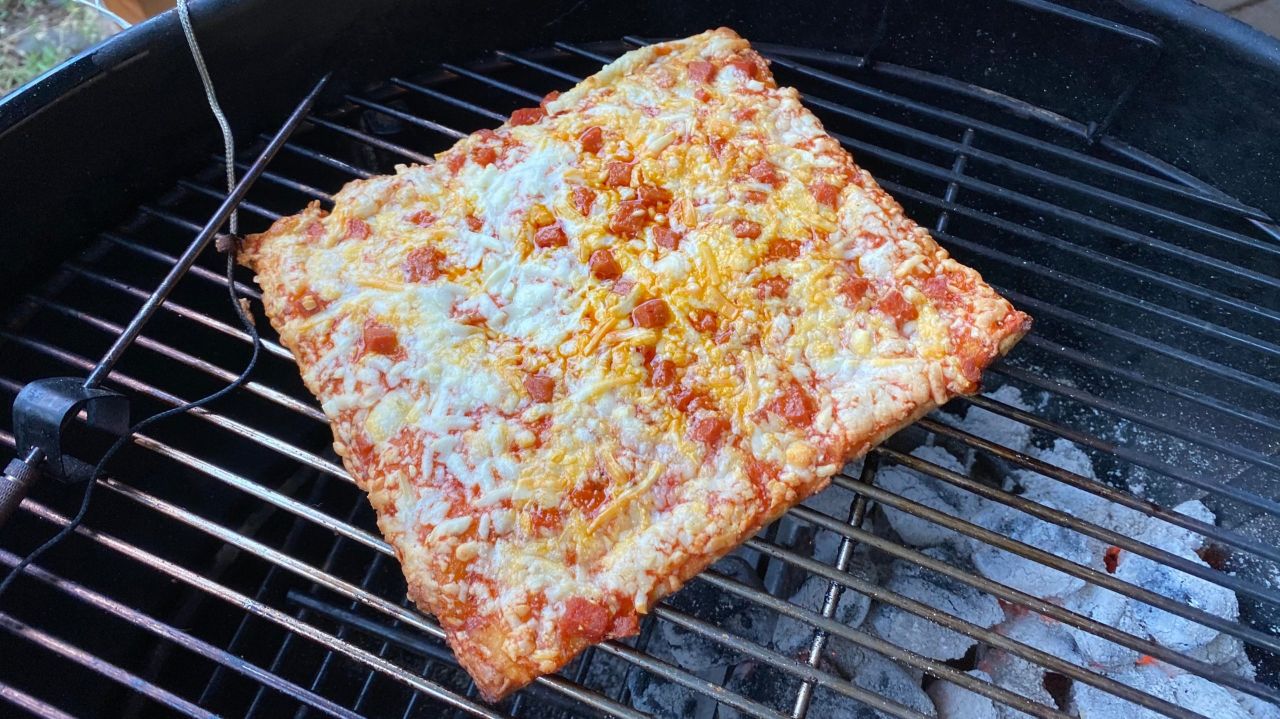 The crust gets crisper, bubblier, and delightfully browned. The only drawback is that you can’t switch on a broiler for browned cheese, but I was pretty happy with how the cheese melted and browned along the edges, thanks to swirling, indirect heat coming off of the coals. You can grill any frozen pizza, but some fare better than others, and there are a few strategies you can take to ensure frozen pizza grilling success.

I grilled a variety of frozen pizzas last night, and found that the thinner, crispier-style crusts did the best. Thicker pizzas came out a little doughy, and they (obviously) took longer. This isn’t such a big deal if you’re only making one frozen pizza (or are using a gas grill), but if you’re working with charcoal, you have a limited amount of time, and you want to get as many pizzas cooked as possible (or at least I do). Skip the DiGiorno, is what I’m saying. 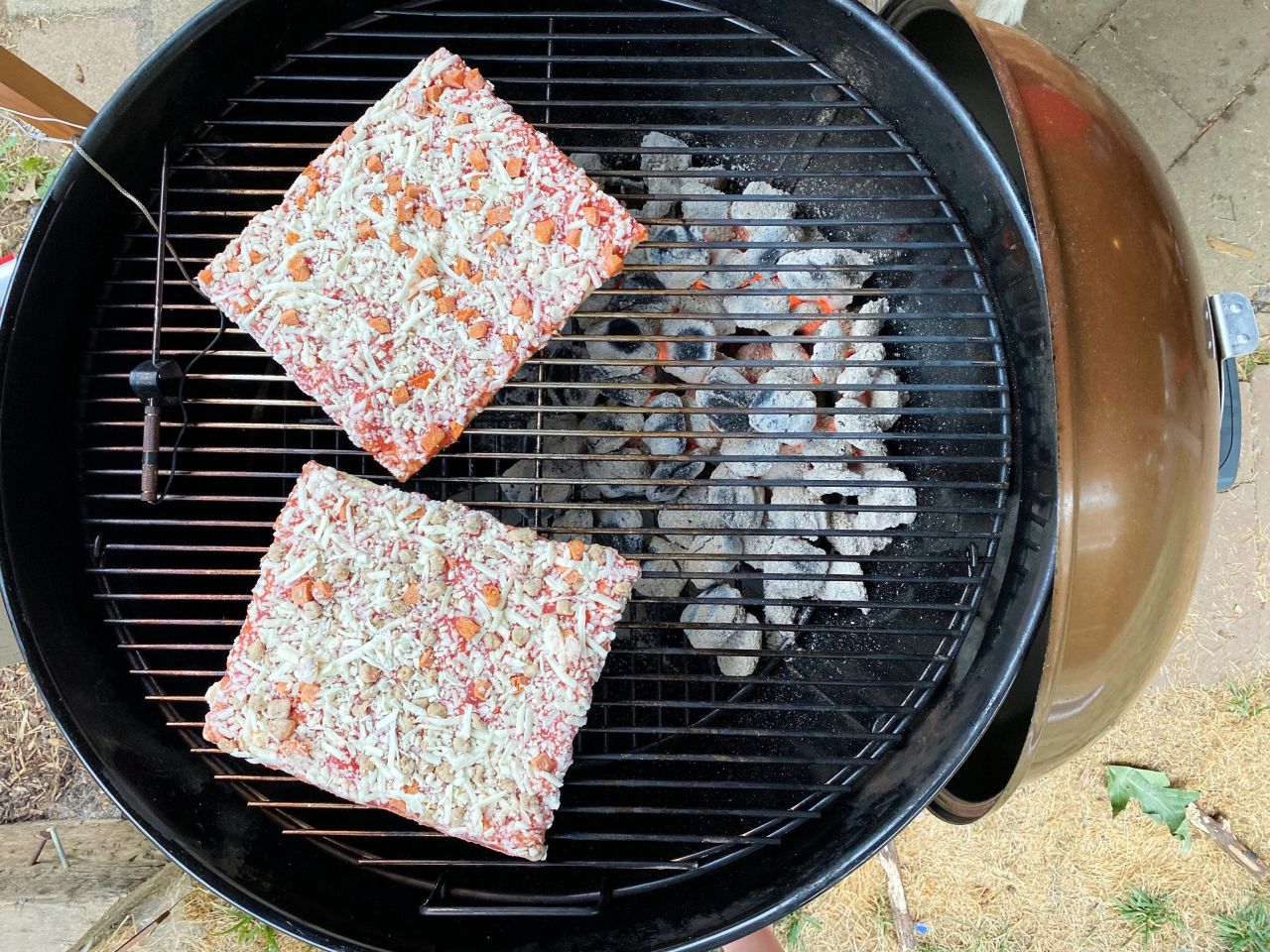 I love frozen Party Pizzas deeply and unironically, and the grill brings out the absolute best in their cracker-like crust. I mean, just look at this browning (but don’t look at my dirty plate). 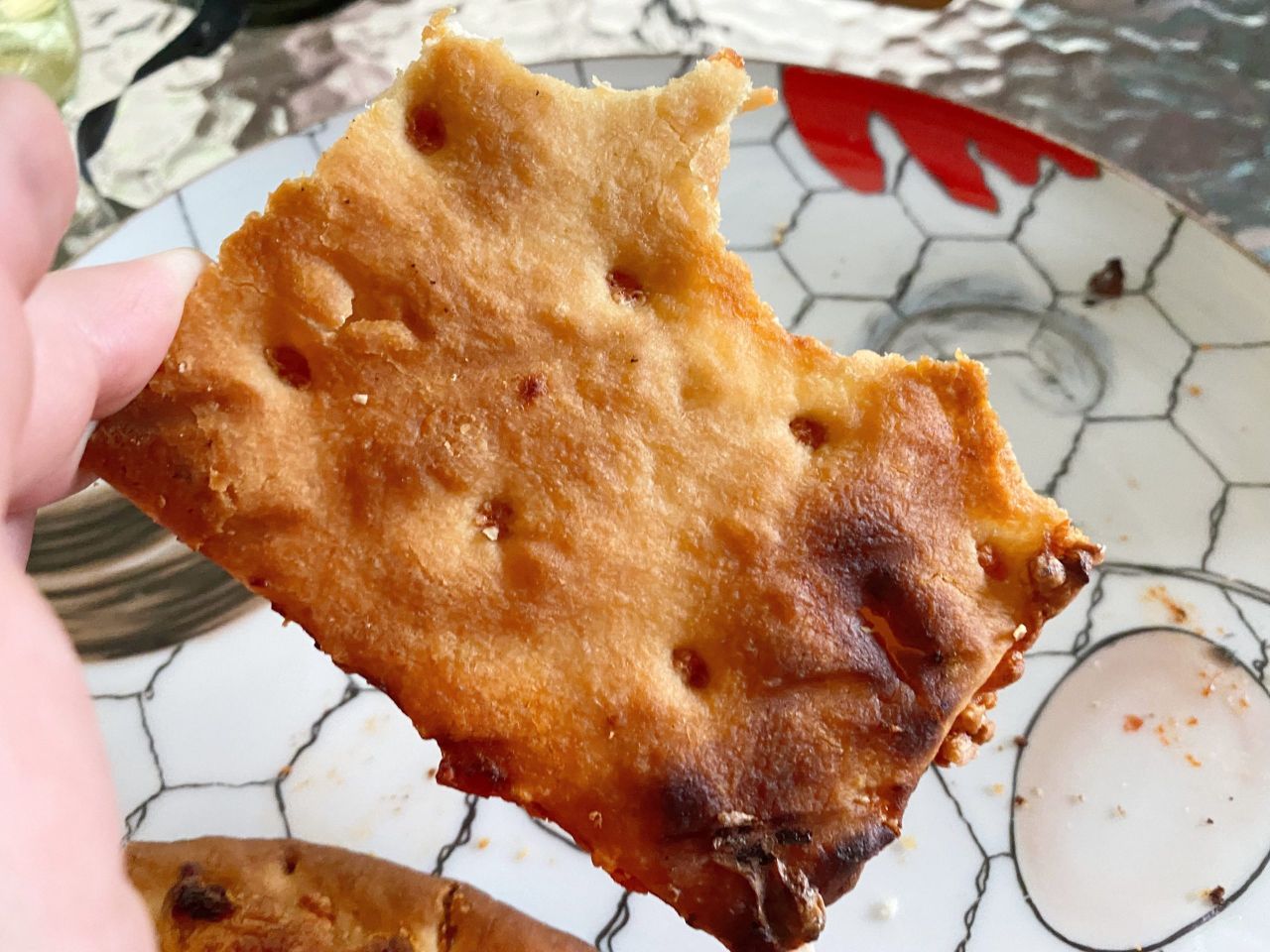 The Red Baron pizza I grilled also did pretty well, but everyone at the table (and there were three other people there) agreed that the fancier Screaming Sicilian’s crust was a disappointment (though the meat on top was pretty excellent).

If you’re unsure which brand to pick up, I strongly recommend you grab a box of party pizzas. They’re incredibly cheap and honestly tasted the best out of all the pizzas we tried. (I bet store-brand pizza would kill.)

Again, if you have a gas BBQ, fuel is not really a problem (unless you’re running low on propane and propane accessories), but a chimney full of coals is a limited resource. I was able to get four pizzas out of one chimney, and I probably could have eeked out one more. The key, as with anything charcoal, lies in minding your vents.

If you’re using a charcoal grill, keep the bottom intake vent fully open the entire time, and start with the exhaust vent about halfway open. You want to keep your grill temp in the 190-220C range. I know that seems wide, but you’re going to be opening the grill up quite a bit, so fluctuations are inevitable. (Also, do not rely on the little built-in thermometer on top of your grill to give you an accurate reading — everyone who grills over charcoal should have an external thermometer.) You’ll want to open the top vent a little more with each pizza, as the coals will gradually cool as you’re cooking. By my fourth pizza, I had both vents fully open.

To grill a frozen pizza into crispy, bubbly perfection, you will need:

If you’re working with charcoal, fill a chimney and get it going by lighting a starter cube or some newspaper underneath. Once the coals are glowing and partially ashed over, dump them on one side of the coal grates and set the grill grate on top. Open the intake vent fully and the bottom vent about halfway, and let the temp rise to at least 190C. If you are using a gas grill, set up a two-zone system with the burners set to medium-high to reach that same temperature. Place a pizza on the “indirect” side (the opposite side of the coals), and close the lid.

Let the pizza cook for five minutes, then give it a quarter turn and let it cook for another five. Repeat two more times, then slide the pizza over to the direct side for a minute if you want to crisp up the bottom. (Be careful here, as it can burn, but I like a little char on my pizza.)

Remove the pizza, close the grill, and — if you’re using charcoal — open up that top vent a little more. Let the temp come back up, then place your next pizza on the grill and do it all over again. Repeat until you are out of pizzas (or until your charcoal is spent).