Apple’s magnetic MagSafe Battery Pack for iPhone 12 costs $139. It charges the iPhone using the MagSafe magnets at the back of the iPhone. It’s a typical Apple accessory. It only comes in white, works out of the box, and charges using Lightning.

But it’s not without its issues. It has a tiny 1460 mAh battery that can’t even fully charge the iPhone 12. There’s no fast charging (it charges at the standard 5W rate). It does have reverse charging, but that only kicks in after your iPhone is 80% charged.

Unless the integrated Apple experience is critically important to you, the MagSafe Battery Pack is not worth the price. Especially when you can find third-party battery packs that will fully charge your iPhone wirelessly, while costing half as much. But first…

Things to know before buying a magnetic battery pack for iPhone

Before you buy one, here are a couple of things you should know.

Now, on to our recommendations. 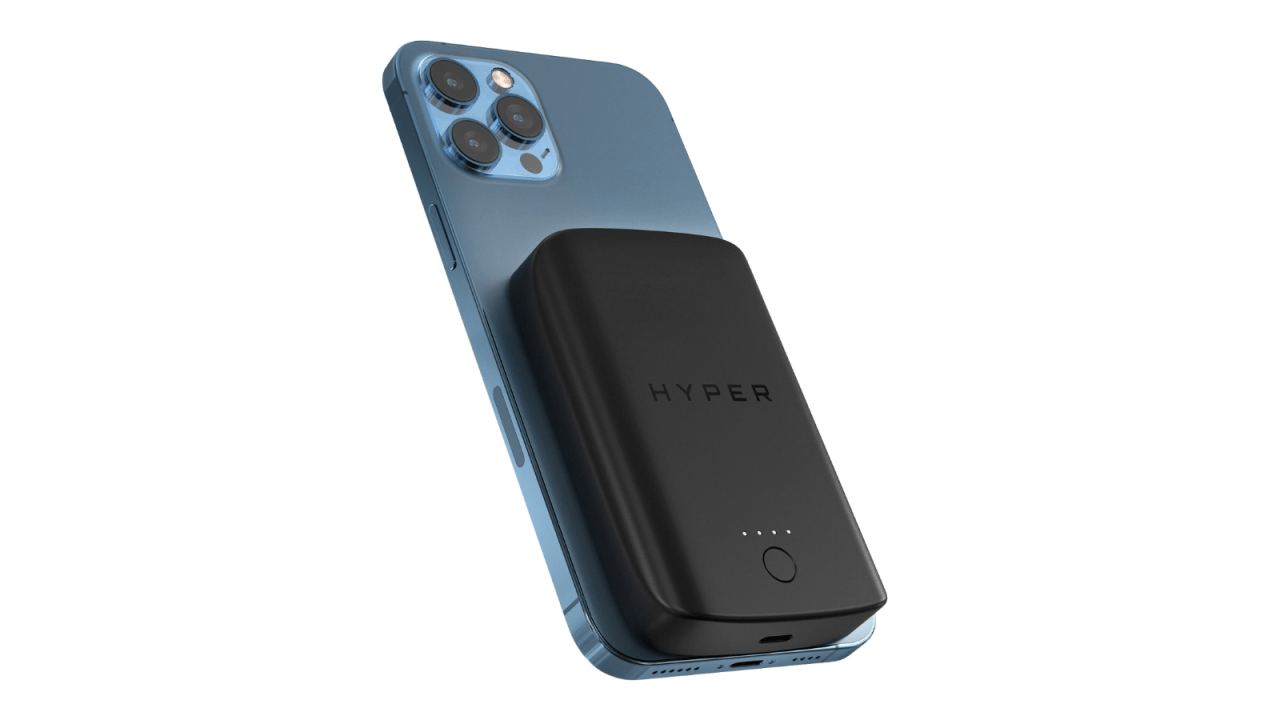 Hyper is the most popular and trusted brand when it comes to magnetic battery packs, because unlike its name, HyperJuice keeps things relatively chill.

This thing packs a 5000 mAh battery capacity in a black plastic shell. The battery pack is a little awkward but not that huge, and has curved sides for a better grip. It charges using a USB-C cable, and there’s a battery indicator at the top.

HyperJuice is one of the few battery packs that delivers fast charging at 7.5W. At $US40 ($54), this is less than half the cost of Apple’s MagSafe Battery Pack, and it’s even cheaper than some of the alternatives on this list. 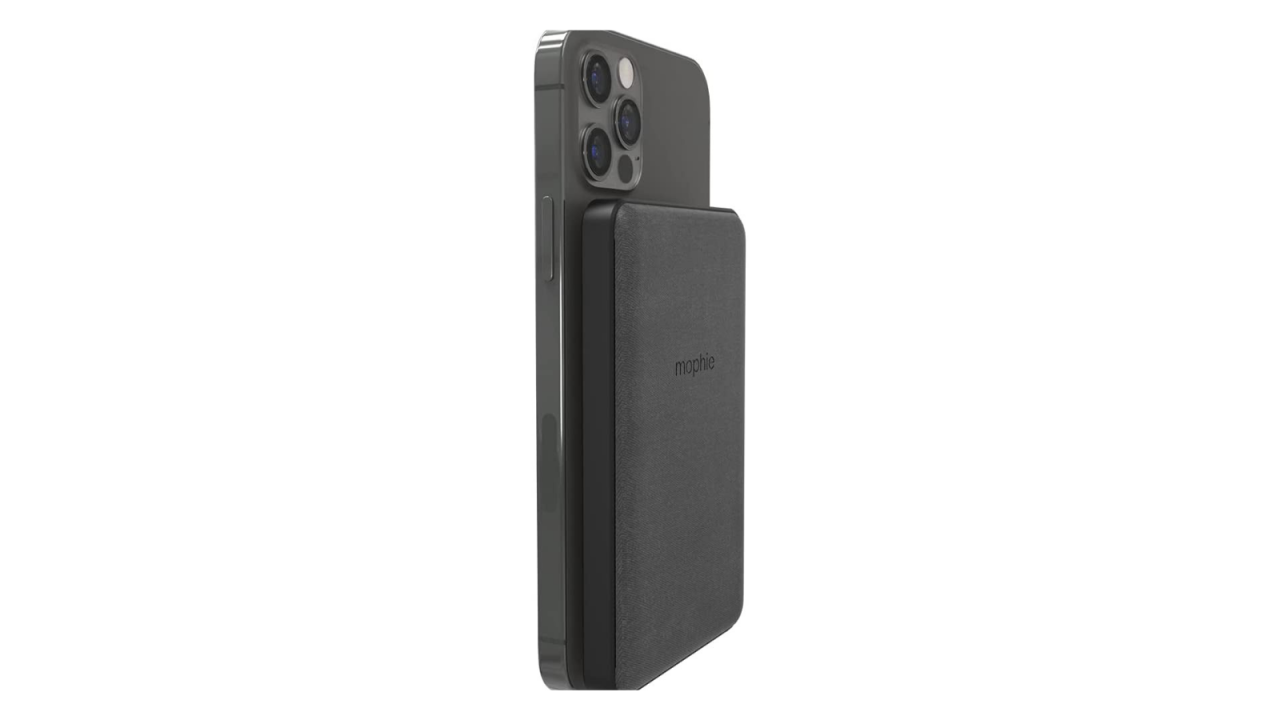 While HyperJuice is squat and thick, Mophie snap+ juice mini is thinner, but taller. It essentially takes up the entirety of the iPhone 12 below the camera bump.

It also boasts a 5000 mAh capacity and charges the iPhone at 5W. The battery pack has a fabric finish, and comes in black. 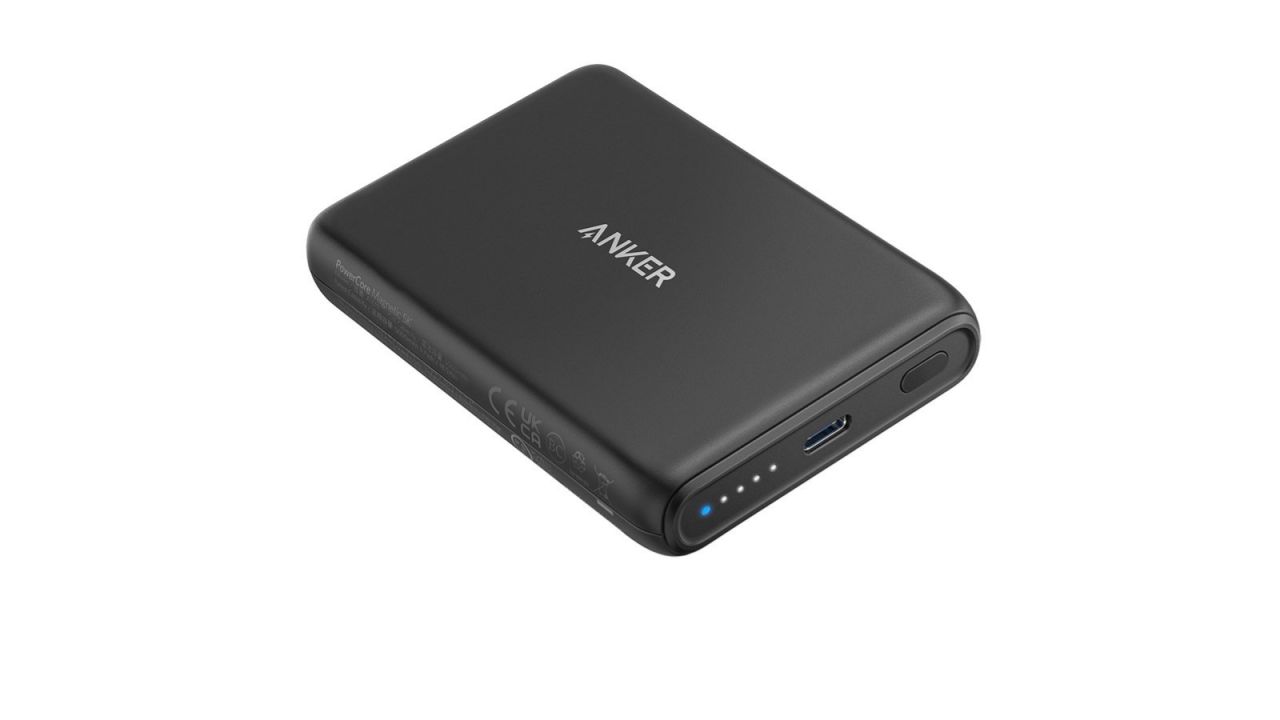 Anker makes some of the best power adapters and power banks out there. So of course, they make their own magnetic battery pack. Like other Anker products, the design of the PowerCore 5K is understated: It’s just a plastic rounded rectangle that sticks to the back of your iPhone. 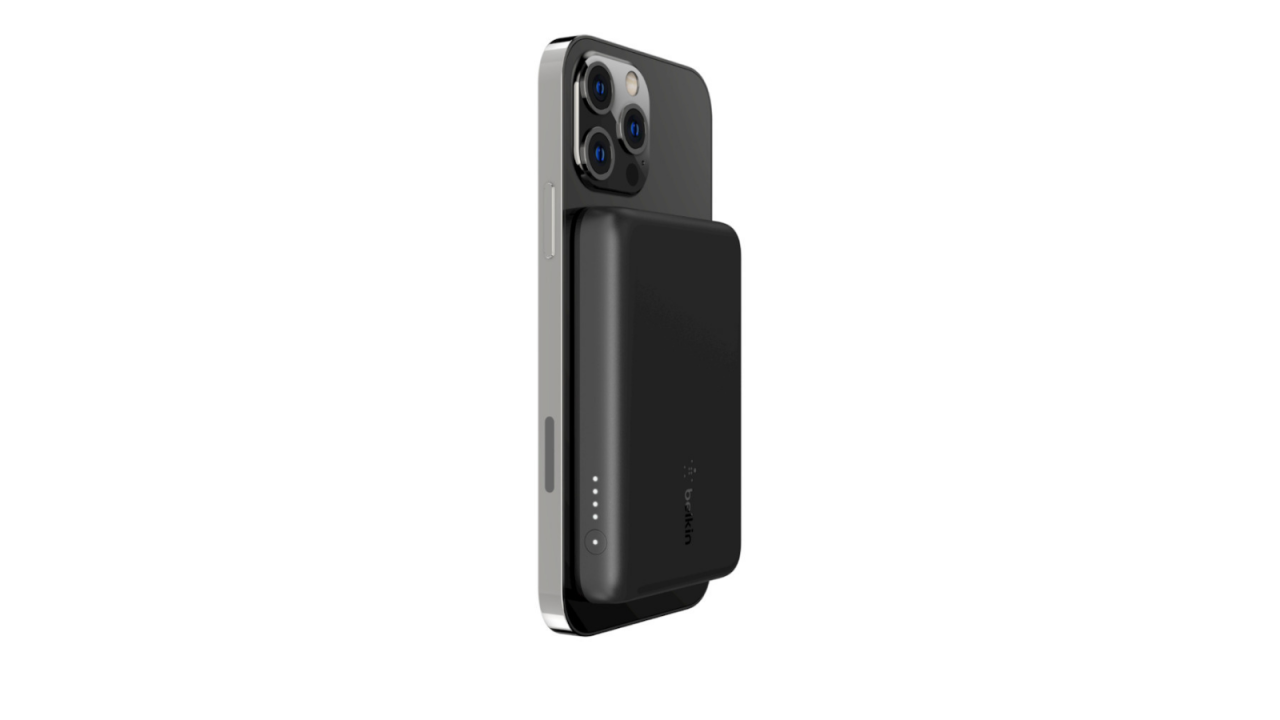 Compared to other battery packs on this list, Belkin’s BOOSTCHARGE battery pack is tiny, capacity-wise. It’s only rated at 2500 mAh, though it’s not really small physically.

But it comes with Belkin’s name and reliability. It charges at 5W and can bring an iPhone 12 up to 50%. 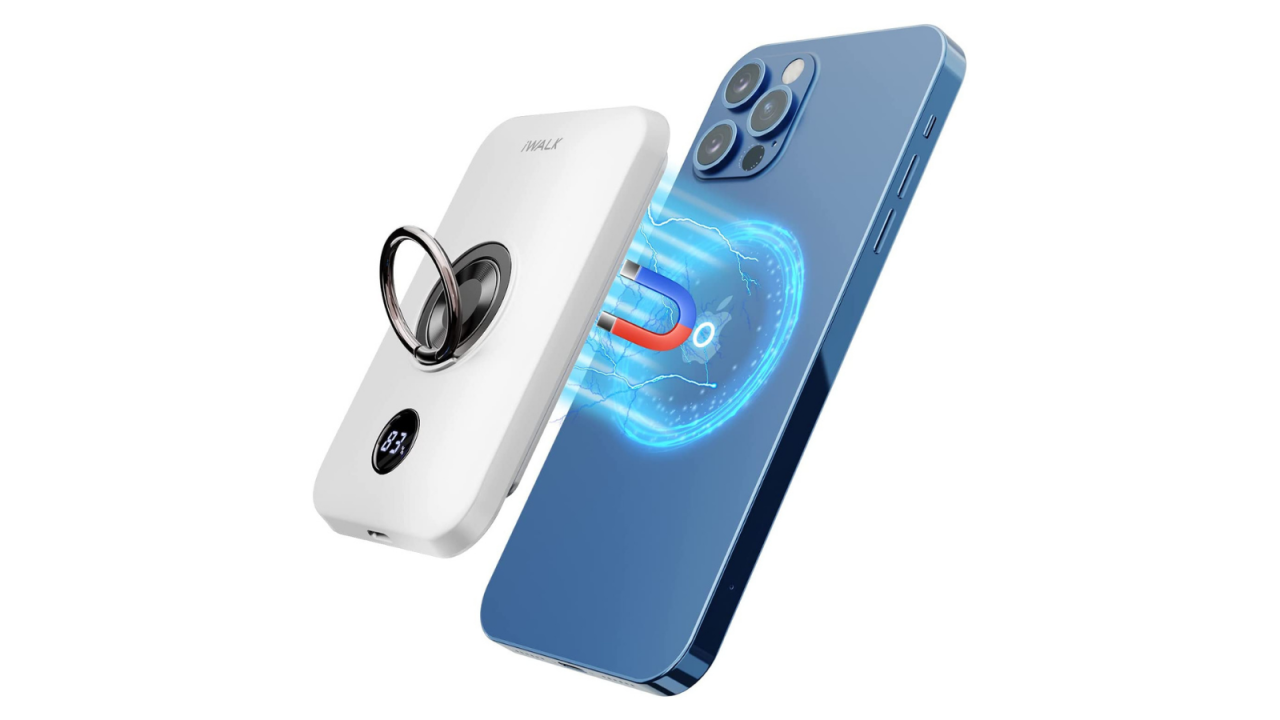 iWALK’s battery pack comes with an added functionality: It has a ring kickstand at the back that will help you easily prop up your iPhone while it’s charging.

The 6000 mAh battery capacity is slightly higher than the usual 5K, and the device is otherwise filled with unique features. It has an LED screen that shows the exact battery percentage. It supports 7.5W fast charging. The USB-C port itself has 18W fast charging support for both input and output, which makes it a great battery pack for wired charging as well. 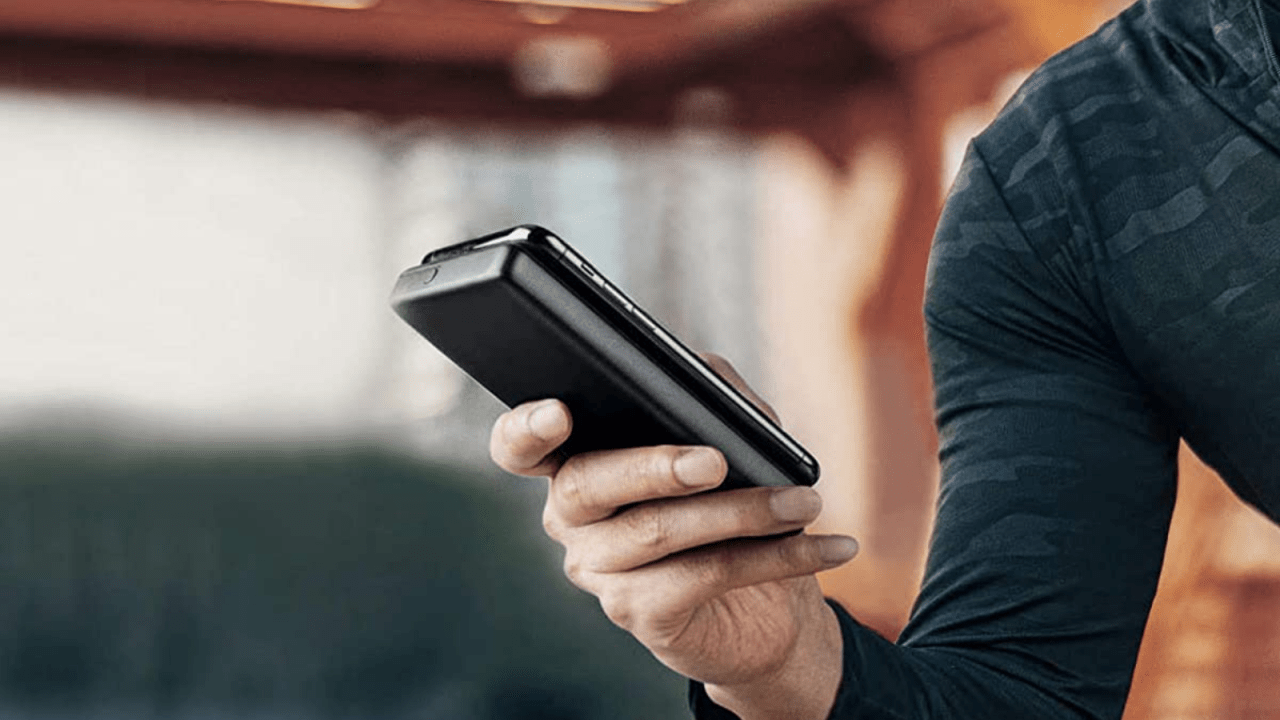 This is not your typical battery pack. It’s a beast that also happens to offer magnetic wireless charging. The PowerCore III has a 10,000 mAh capacity and takes up the entire back of the iPhone. And it’s quite a bit thicker than the phone, too.

This means you can’t really use your iPhone comfortably while you’re charging. But if you’re OK with that, the payoffs are huge: You get 7.5W fast charging and the ability to charge your iPhone (and other devices) multiple times over.

The battery pack has a USB-C, and a USB-A plug, so you can charge two devices at once at 18W.

If you’re looking for a sleek and colourful battery pack, OISLE’s magnetic power bank might be the one for you. It’s lighter on the capacity front (4225 mAh) but it’s relatively sleek and comes in five different colours.

It charges your iPhone at 5W, and it weighs only 80 grams (coming in at under 10 mm thickness). It won’t fully recharge your iPhone 12 Pro Max, but it’s unobtrusive enough that you won’t constantly be thinking about it either.