How to Get a Chronological News Feed in Facebook

All I ever want is to set my Facebook News Feed to chronological. I don’t care what Facebook thinks I should look at, or what it thinks are the most popular posts around my friend network. I just want to view everyone’s posts based on the time they post them. That’s it.

I’ve gone to great lengths to make this happen on my desktop PC, and aside from a few quirks where I keep getting redirected back to Facebook when I’m trying to leave the site, it’s served me well.

However, Facebook is now kind-of, sort-of making it slightly easier to get a more customised News Feed within its iOS and Android apps. When you scroll down through your feed, a little bar will stick to the top of the app’s window that will let you stick with the algorithmic “Home” feed or switch to separate “Favourites” and “Recent” feeds: Remember, the “Favourites” feed is one you curate yourself. Tap on it, and then tap “Manage Favourites” to add various people and pages to your Favourites list. They’ll appear higher up in your News Feed whenever they have something to say, and they’ll be the only entities that appear on your Favourites feed.

The “Recent” feed, though, is just that: everything you can see on your Facebook News Feed, but chronological. But there’s a quirk worth keeping in mind about this entire setup. You can tap the settings-like icon to the right of Recent, which seems to imply that you’re selecting a default option for your News Feed: 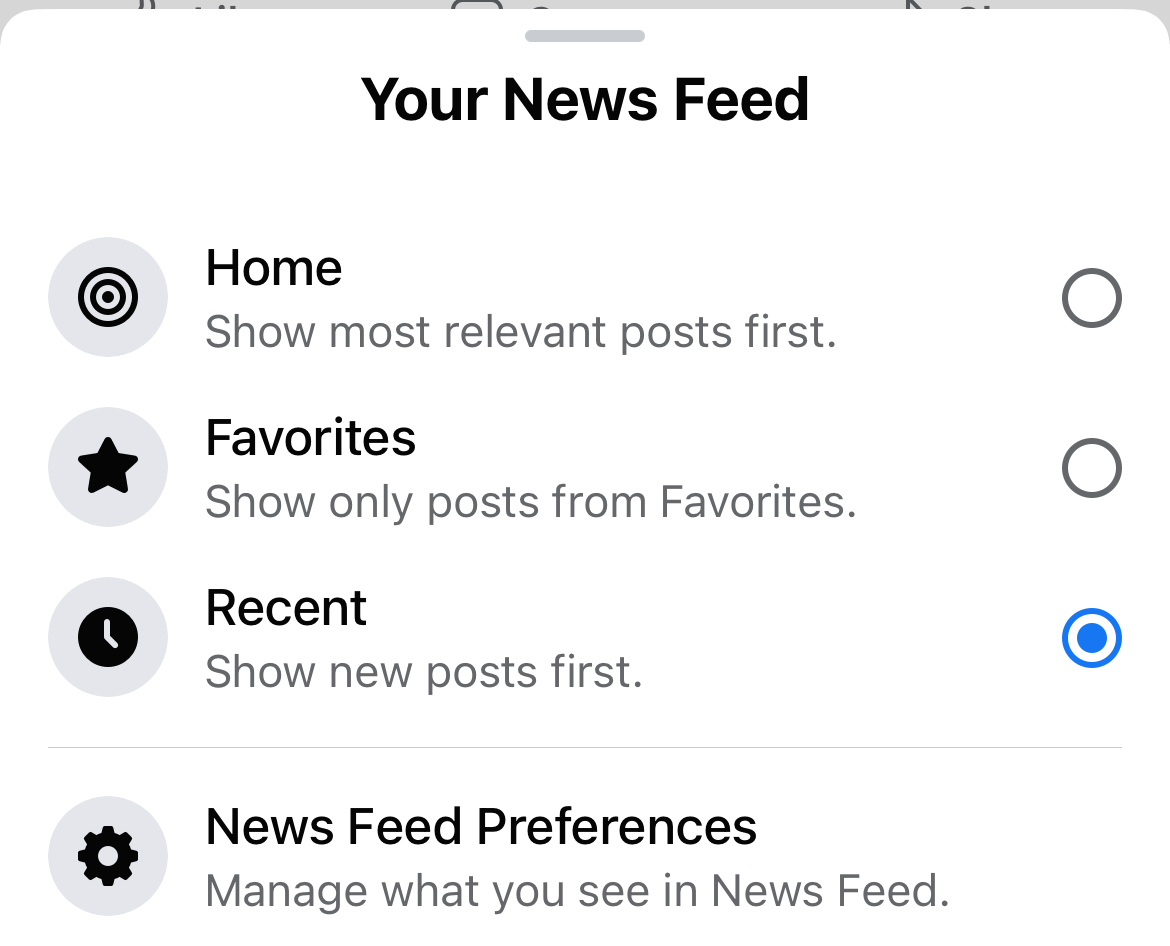 Unfortunately, this isn’t the case. Tapping on these options accomplishes the same thing as tapping on them directly in that little stickied bar. Close and relaunch your Facebook app, and you’ll see that it defaults to your Home News Feed by default.

One step forward; two steps back. We’re closing in on the Holy Grail here — a way to pick a default feed — but I’m also suspicious that we’ll ever get that option, since it’s obviously in Facebook’s interest to show you a diverse range of content, rather than, say, what 20-30 people post. I’ll keep holding out, though. And I’ll also keep searching for a clever hack that defaults to a chronological feed in my Facebook apps forevermore.