The Best Alternatives to Google Photos

The day has finally arrived. Google has flipped the switch on Google Photos from “free” to “paid.” Soon, you’re going to have to subscribe to a Google storage plan to use the service if, or when, you fill it up your free storage space with too many photos and videos.

Though Google announced the change yesterday, it’s giving all Google Photos users until June 1, 2021 to keep using Google Photos without any limits. Anything you upload until that point — high-quality photos and videos, not original-quality photos and videos — won’t count against your existing free storage quota with Google (15GB). Anything you upload after that will eat away at the storage that you share with all other Google services, including your sprawling Gmail account.

You can read Google’s full description of the changes here, through gritted teeth. While I always figured Google Photos would go this route, it’s still a bit jarring that we’re finally here. One of the very best services for free photo storage is closing up shop — at least, the “free” part of it. Given just how many photos and videos we all take, it’s all but guaranteed that most people using Google Photos will, at some point, have to start paying for storage.

If this upsets you, or you want to make sure you’re getting the most for your money once you’re indeed paying for online photo storage, let’s explore both Google’s offerings and some noteworthy alternatives. 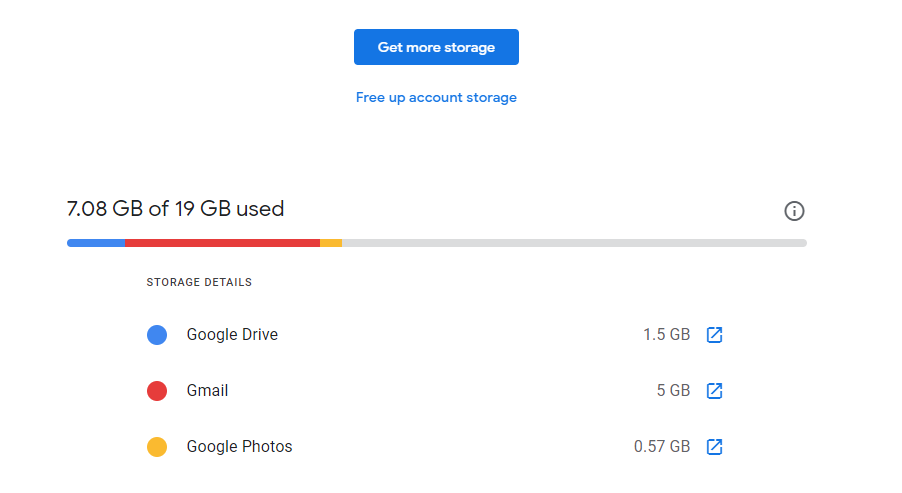 Honestly, Google One isn’t a bad deal. Across most price tiers, we found it offers a healthy amount of storage at low prices. The caveat being that you split your storage space across all Google services, not just Photos. You’ll need to be diligent about keeping your Drive and Gmail clean.

How much do you need? Well, that entirely depends on how many photos and videos you typically shoot. I suspect you’ll be fine with the barebones 100GB plan for now. I’ve been using Google Photos since forever, and I’m only eating up 0.57GB of space right now — something you can check yourself, if you’re curious, via this link.

Don’t forget, if you’re using one of Google’s Pixels to shoot and upload photos or videos, they won’t count toward your storage quota as long as you’re only uploading “High Quality” and not “Original” versions. That’s one perk of using a Google Android (which always annoys me, an Apple user who pays for iCloud, but I digress). 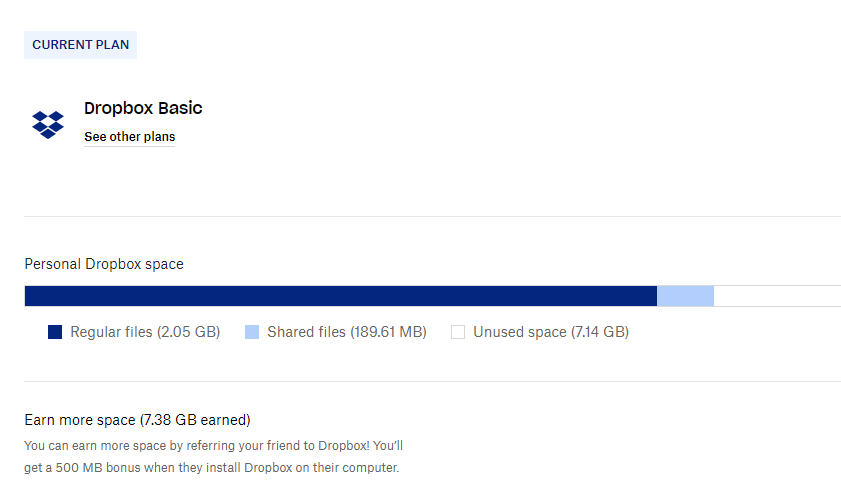 Dropbox is pricier than Google One for sure, in the sense that there’s only one “basic” tier you can buy — 2TB for $14/mo. While you won’t get fancy features like Google Photos’ face-recognition for searching, Dropbox does offer a lot: automatic backups for photos, videos, and screenshots; document scanning; a dedicated section of its mobile app for browsing through your photos; and comprehensive access control (including password and timers) for any content you share with others. You’ll also gain access to Dropbox Transfer (for sharing huge files), Dropbox Passwords (for securely storing and using all of your passwords), and Vault (PIN-based authentication for critical files that you’re already storing in Dropbox).

Additionally, switching to a service like Dropbox can feel like the moral move too: Some people simply don’t like the idea of having to pay Google to store data that Google is ultimately using, in some way, to make its own technologies better. For example, you can “help” Google improve its object-recognition capabilities using your own photos. Shouldn’t Google be giving you something for the assistance?

Google One? Generally cheaper for the same (or more) storage versus iCloud. However, if you’re an iPhone owner, transitioning to iCloud for your photo and video storage is going to be the absolute easiest move you can make. There’s even a 50GB/mo tier for $1 if you want to get your feet wet with cloud storage.

Like Google, the iCloud storage you purchase can be used for much more than photos. You can store your documents, your backups, your messages, your… well, just about everything you do on an iPhone, really. And that data can then sync across all your Apple devices, ensuring that your precious photos are within a few taps or clicks no matter what you’re using.

While Apple is (obviously) a gigantic corporation, just like Google, I’m also a bit more willing to buy into the company’s stance on privacy than the search giant’s. Apple, after all, wants to sell you hardware and services — not advertising — and it always seems to be pushing to make more AI-driven features happen exclusively on your device, where they’re relatively secure, rather than in the cloud.

Of course, Apple also runs a monopoly via its App Stores, so it’s not like you’re sidestepping all moral quandaries by moving to iCloud. 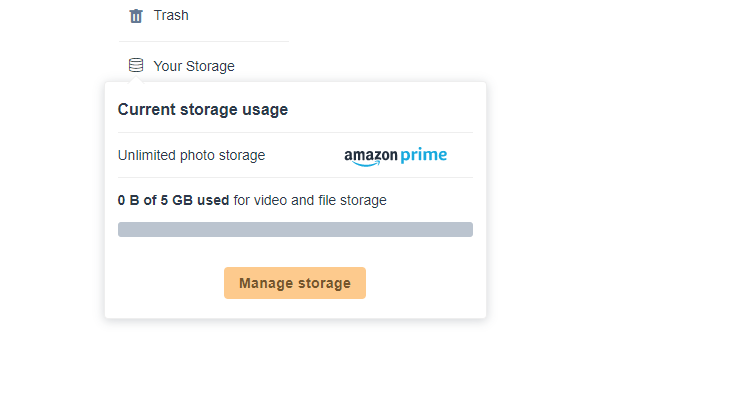 Should you pay for Amazon Photos? You can’t. There’s no standalone photo service you can buy from Amazon. Rather, the service’s free, unlimited storage for all your full-resolution photos comes as part of a regular Amazon Prime membership. So, if you’re already bought into Amazon, then moving your photos to a service you’re already paying for is a no-brainer — with one gigantic caveat.

As you can probably guess, the free storage offer is only good for as long as you’re an Amazon Prime member. Should you ever drop your membership for any reason, you’ll either have to pay separately for Amazon Drive storage — starting at $2/mo or $28/year for 100GB — or frantically download everything to re-upload it somewhere else.

Amazon’s pricing is comparable to Google and Apple’s for cloud storage, so I would probably go with one of the latter if I was paying. That huge chunk of storage you’re buying will benefit more services across Apple and Google’s ecosystem, whereas with Amazon, you’re really just buying a chunk of cloud storage. It’s not like you have an Amazon email account, nor do you upload your phone backups to Amazon.

Host your own solution 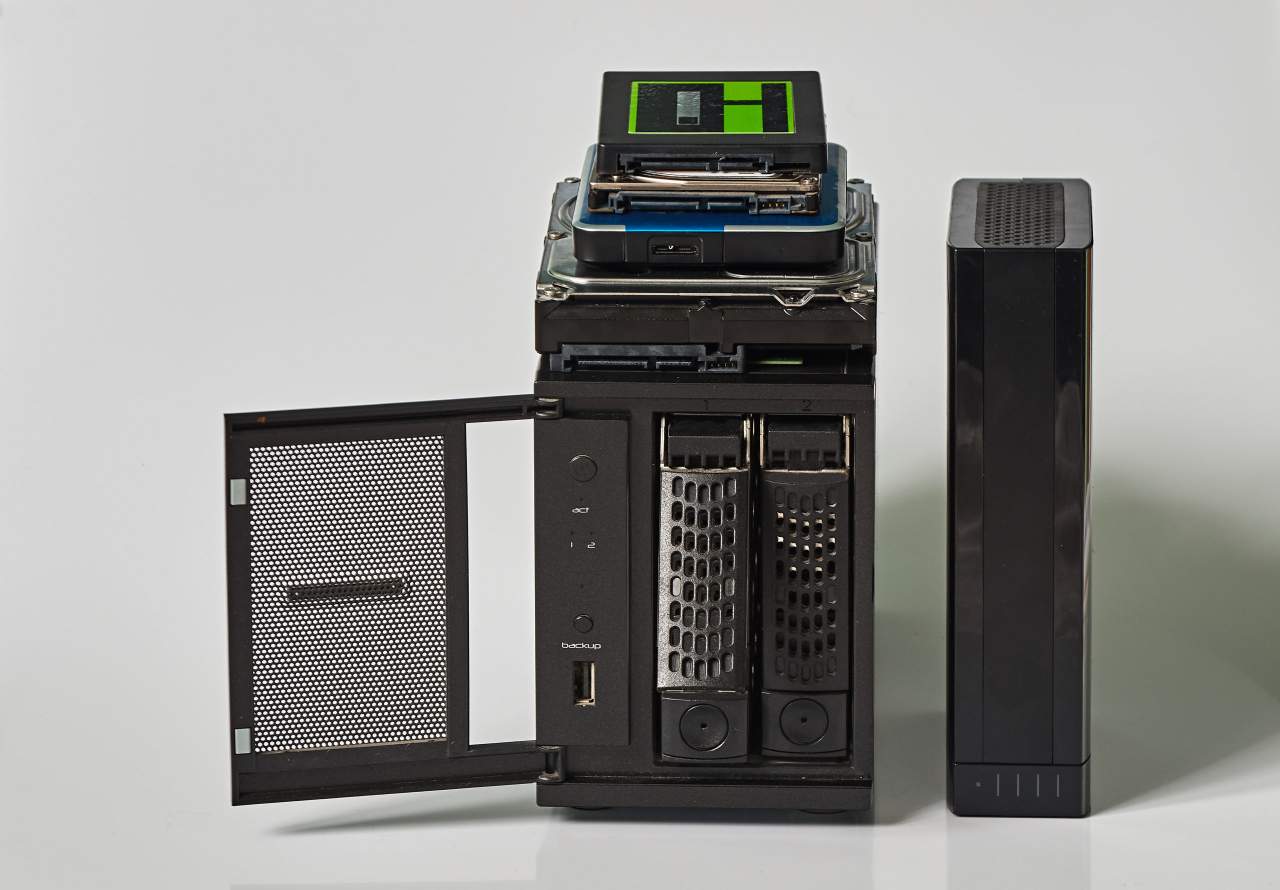 Assuming you feel like building a server at home, or you have a NAS box at the ready, you can always just store your photos yourself. Software like Piwigo, PhotoStructure, or Lychee will require a bit more work to get going than clicking a button and signing up for a cloud service, but you won’t have to pay a dime to access them beyond your initial hardware setup costs. Nobody will be able to get into your photos and videos unless you let them.

While you probably won’t be able to access your photos remotely unless you tunnel into your home network, it’s not that hard to set up a simple archiving process. For example: Dump everything to your local storage on a regular basis, but keep a copy of your photos on your phone. When your phone starts to get full from local photos storage, simply delete the oldest year’s worth of photos. Repeat as needed. Easy.

Prior to Google Photos, this is how I stored all of my multimedia, albeit via a much simpler approach. I’d dump all the photos from my phone to my computer and use an app to automatically create folders based on the month each photo was shot (from the photos’ EXIF data). I’d then transfer these folders to my NAS box, and repeat the process every month. I’d still save my photos to the cloud — typically iCloud’s free version — as extra insurance, but I’d also liberally delete older photos from my phone that I didn’t care about as long as I knew they were safely stored at home.

I suppose nowadays I could just use an app like PhotoSync to manage this all for me. And I very well might, now that Google Photos’ free version is disappearing. I’m still sad about that.