Twitter’s insistence on showing tweets out of order has been a long-running complaint. Sure, there’s a setting that claims to show your feed in chronological order, but it almost always resets back to the “top tweets” view if you don’t keep an eye on it.

Even if you’re lucky enough to have the “latest tweets” toggle stay on, chances are that multiple accounts you follow will retweet the same people — not to mention all the ads and “suggested” tweets from people you don’t follow cluttering up the place.

Seeing the same Tweets over and over is just one of many complaints I could level against Twitter, but it’s by far the most annoying one for me. Thankfully, it’s now one of the easiest to fix. Like so many of Twitter’s shortcomings, a handy third-party browser extension called Just Arrived makes it easier to spot the newest stuff in your timeline by dimming the tweets you’ve already seen. 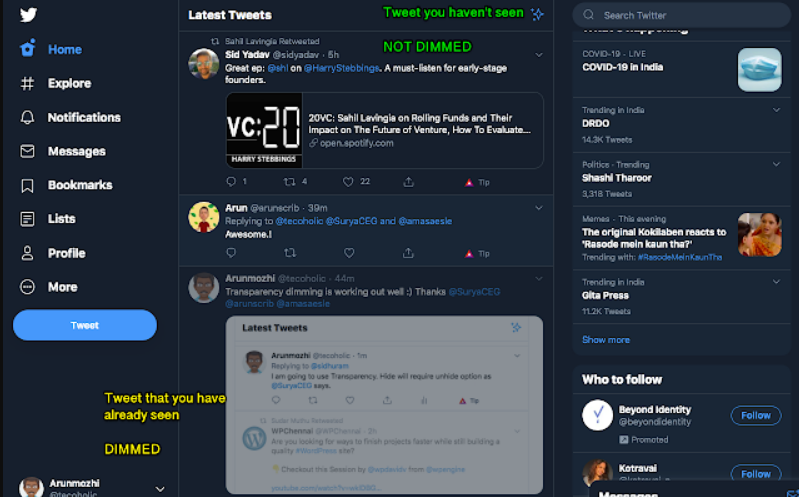 Note that this extension does require permission to read some tweet data in order to work, but according to Just Arrived’s Chrome Store description, “No data is harvested, no information ever leaves your browser.” The add-on’s developer, Arunmozhi, also confirms to The Next Web that none of the data is shared or stored remotely; it’s only saved locally on your device, and the cache is deleted once a day.

Just Arrived is available on desktop for Google Chrome and Firefox (sorry, mobile users), and it handles everything in the background once you install it.

The add-on takes note of which tweets are visible in your timeline, and the next time you open Twitter (or refresh the page), the Tweets you’ve already seen will be dimmed in your timeline and elsewhere on the site. It’s much easier to ignore dimmed tweets, but the effect only fades them out slightly, so you can still read older tweets just fine.