Why You Should Season Your Cast Iron The ‘Wrong’ Way

Late last year, I found myself at a crossroads. After ten and a half years, I was getting real fucking tired of dealing with my cast iron pan. Out of nowhere, it suddenly refused to take on seasoning—and hauling it around was worsening the chronic wrist pain I developed the moment I turned 30. I had two choices: Either figure out what was going wrong, or give up on cast iron for good.

Clearly, I chose door number one—but I can’t emphasise enough just how close I came to leaving my large, needy son on the curb. At the time, I thought I was doing everything right: Avoiding soap and abrasive cleaners; seasoning after every use over high heat; occasionally lubing him up with Crisco and sitting him in a 260ºC oven for a couple hours to think about his choices. Despite all that, my seasoning was shit. Everything stuck, and I was constantly pissed off.

Don’t worry—we’re in a much better place now. With more than a little help from Cowboy Kent Rollins on YouTube—who has the most laid-back approach to cast iron maintenance I’ve ever seen—I’m back to using my pan every day. My new cowboy dad taught me that seasoning doesn’t need to involve lungfuls of burnt canola oil or running your oven at 500ºF for two hours at a time; it can be a short, sweet, stress-free process.

These days, my seasoning routine looks a whole lot like Kent’s. For stovetop seasoning, I get a clean pan hot—but not smoking—over medium heat. Using a Crisco-soaked rag, I apply a thin layer all over the inside of the pan and cut the heat. Then, I let the pan cool for 10-15 minutes and wipe off excess oil with another rag. To season pans in the oven, I wipe them with the same Crisco rag, park them in a 190ºC oven for 5 minutes, remove and quickly wipe off the excess oil. After another 30-35 minutes in the oven, I turn off the heat and let them cool. As for cleaning, let’s just say that my approach is less precious than it used to be. 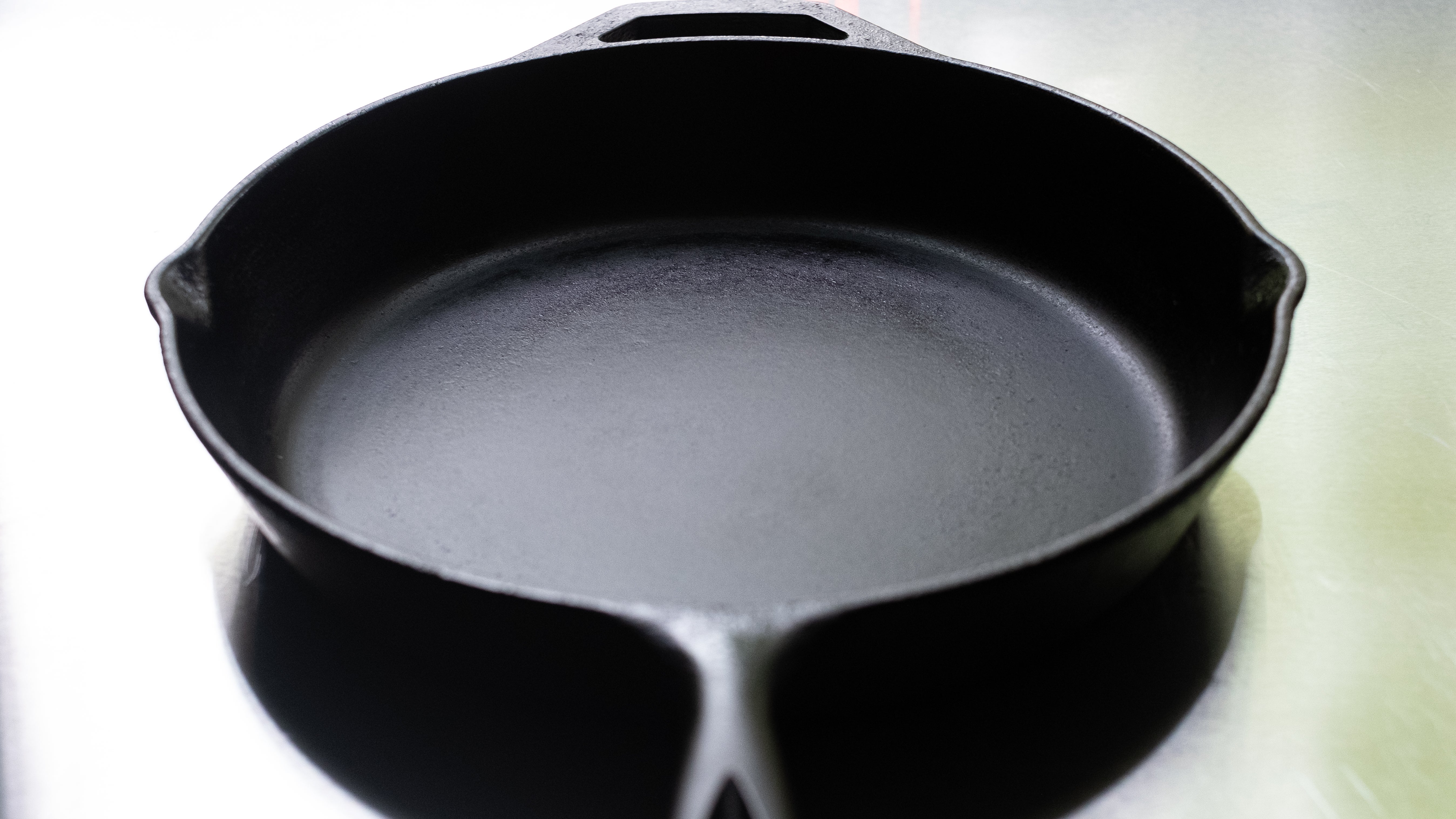 I wouldn’t change a thing. Each aspect of my routine—my precious Crisco rag, low heat, even a little soap and steel wool—plays an important part in maintaining a smooth, nonstick surface. Here’s how I got to where I am.

Ditch the paper towels and use cloth instead In the context of cast iron maintenance, paper towels are recommended entirely too often. Sure, they soak up oil quickly, but they also saturate quickly—and a saturated paper towel is useless. You basically need to discard each layer of paper towel as it soaks up oil; otherwise, you’re just pushing the oil around the pan. (Plus, I have yet to find a brand of paper towels that doesn’t leave tiny fibres behind.)

Do you know what would never do that to you? An absorbent cloth. I switched to rags for cast iron seasoning 5 or 6 years ago and haven’t looked back. I use two: One soaked through with Crisco, one not. (The former is for applying seasoning, and the latter is for wiping off the extra.) When not in use, I store them in a ziplock bag in the freezer. 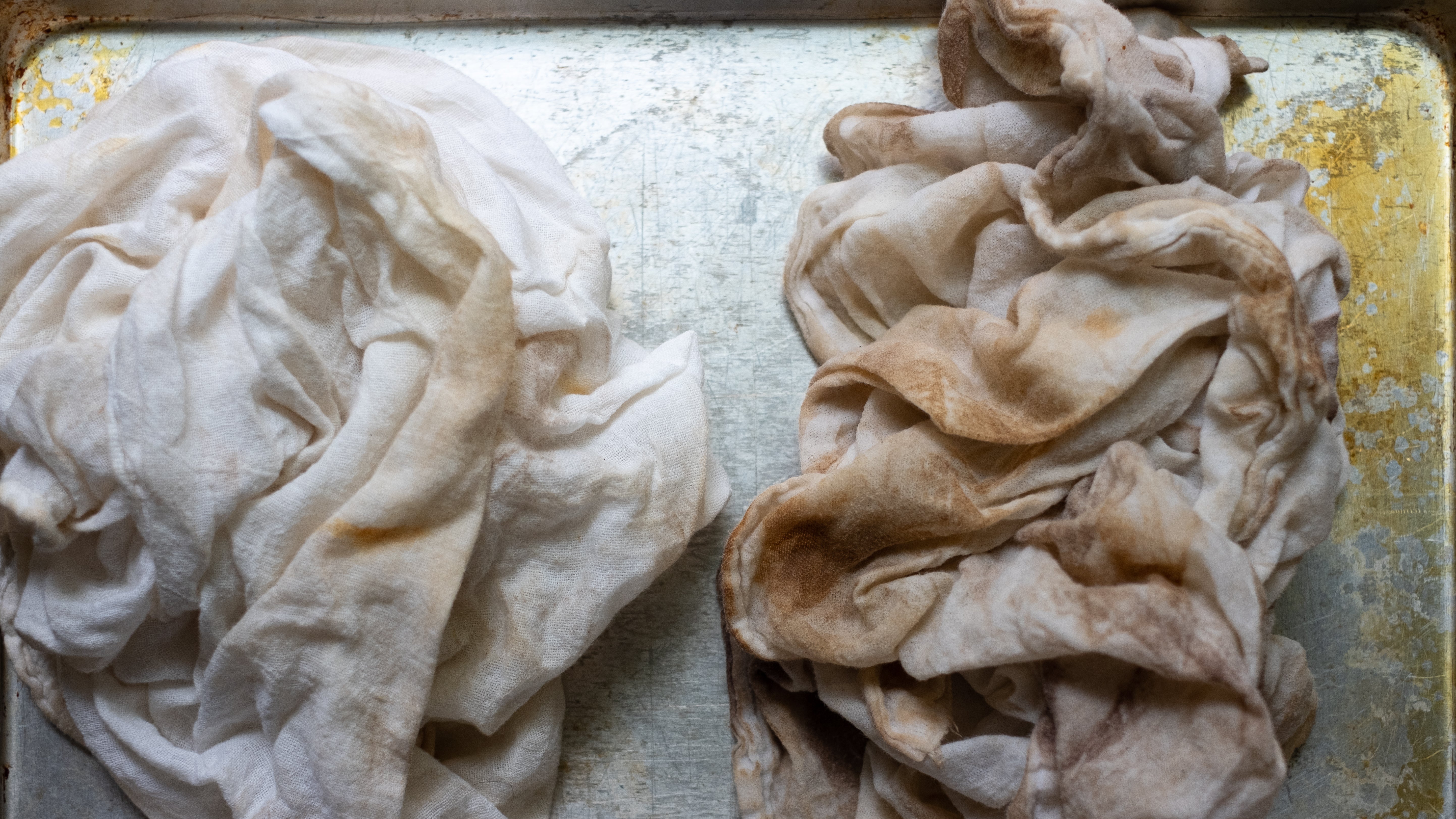 Cheap cotton flour sack towels are my go-to because they’re also my favourite all-around kitchen towel, so I have tons of them. Cowboy Kent recommends bandanas; I’ve even used old T-shirts in a pinch. As long as you choose something lightweight, heat-resistant, absorbent and lint-free, you’ll be set.

Turn the heat down

A smoking hot pan cooks a great steak, but it is terrible for seasoning. As Kent helpfully reminds us, in order to take on seasoning, your pan has to absorb it first—which won’t happen if all the oil goes up in smoke:

Using lower heat for a shorter period of time encourages proper oil absorption and polymerization, both of which are key to achieving that perfectly smooth, shiny surface we all crave. (Plus, it avoids filling your kitchen with smoke.)

This is why I stick to medium heat on the stove and 190ºC in the oven. I found the right temperatures through trial and error: Crisco’s smoke point is cited as high as 230ºC and as low as 180ºC, so it makes sense that 190ºC works as well as it does. My pans always come out slightly gummy when seasoned at 175ºC, while temperatures in excess of 200ºC smoke out my kitchen.

Whether you season on the oven or the stove, if you’re not thrilled with the finish on your pans, try a lower temperature. And don’t underestimate the power of residual heat: Letting your freshly seasoned pan cool down slowly is just as important as heating it up. Remember, you want to keep smoke to a minimum—how you get there depends on your pan, your range and the type of oil you use. Keep experimenting until you find your perfect method.

Another game-changing trick I’ve picked up from Cowboy Kent is cleaning a hot pan with hot water. “Steam cleans in a hurry,” he says—and boy, is he right. Putting a hot pan under a stream of hot water instantly produces a big cloud of steam, which loosens just about anything stuck on the surface. A quick scrub with a stiff nylon brush and you’re good to go.

But sometimes the steam clean leaves stuff behind. When this happens, I fill the pan about halfway with water and set it on the stove to boil—like a full-on, ripping boil. After a few minutes, those stubborn stuck-on bits scrub right off. Just be mindful: Boiling water strips seasoning like crazy, so use it strictly as needed.

Get a little rough every now and then

The list of alleged cast iron don’ts is just as long as the list of dos. Don’t use metal utensils or abrasive cleaners; avoid aggressive scrubbing; never allow even a single drop of soap to touch the surface—stop me if you’ve heard this one.

Most of these rules are total garbage. Cast iron is too hard to treat with kid gloves, and I do mean that literally—the material itself is so hard that keeping it smooth requires some elbow grease. No matter how tightly you control the heat while cooking, one day you’ll go a little too hard and burn some food or oil onto the pan. Over time, those burned-on bits will build up and eventually flake off, neither of which is what you want.

I now fully embrace the power of abrasive cleansers, or as I like to call them, cast iron exfoliants. Whenever I notice a rough or flaky spot, I attack it with Barkeeper’s Friend, steel wool or even coarse sandpaper. This allows me to target specific areas without compromising the rest of the seasoning I’ve worked so hard to maintain. It’s fine. It’s fine. I promise.

Scrub brushes and steel wool can only go so far, though. If your cast iron came out of the box rough as hell, you can use a radial sander to refinish it. Cowboy Kent, of course, has a video for that:

This is a bit of a project, but it makes a massive difference. I recently resurfaced a shitty $15 griddle that I bought 3 months ago in a moving-induced fugue state. Before sanding, the surface was so rough that it shredded two separate Crisco rags—but look at her now: 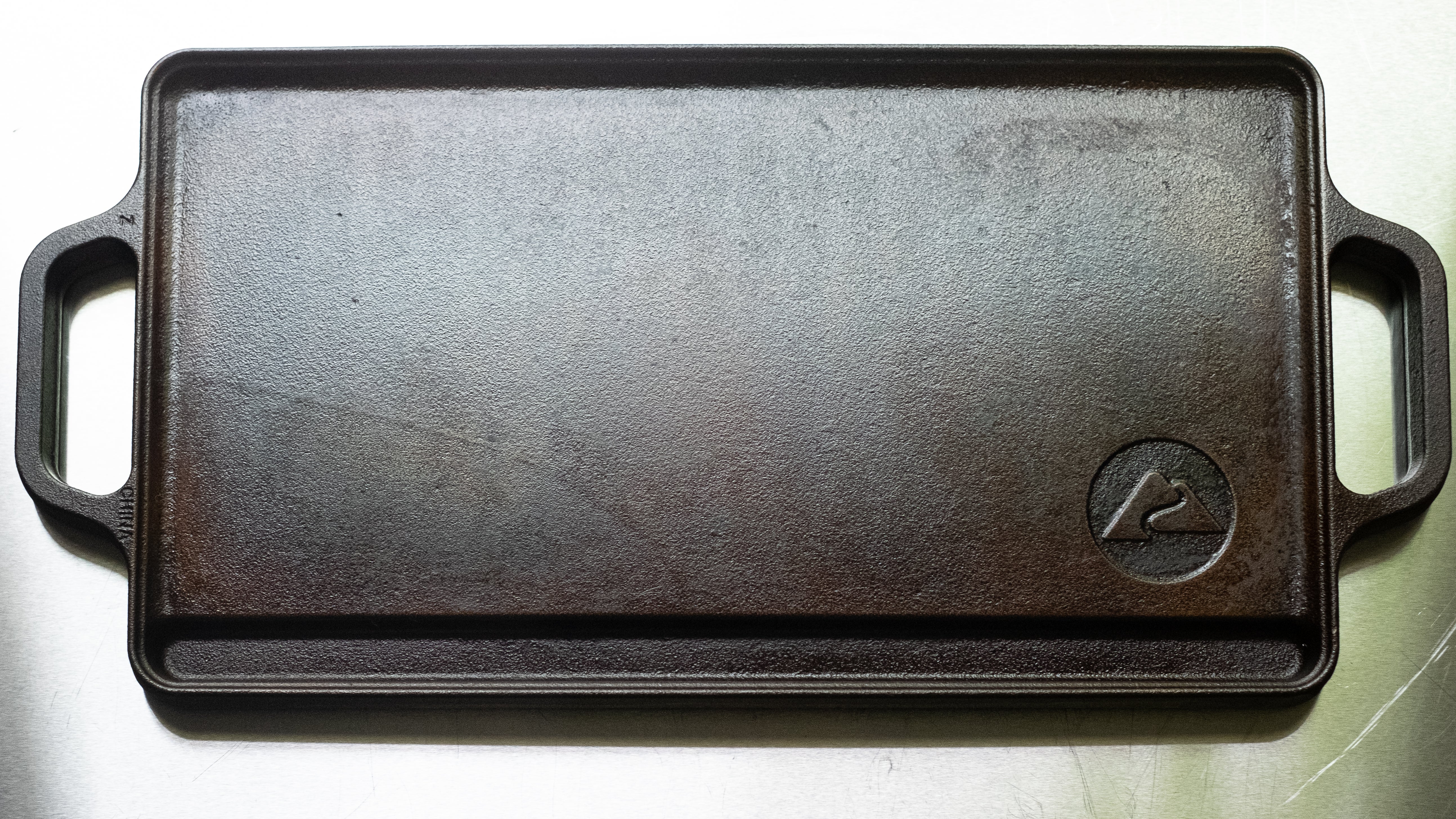 I wouldn’t call this finish completely nonstick, but it’s getting closer every day.

This brings me to the final and most important part of my cast iron reeducation: Accepting that seasoning takes time. Without getting power tools—or a lot of elbow grease—involved, your pan will probably never look the way you think it should.

But that’s ok. A piece of cast iron doesn’t need a flawless mirror finish to be the most useful thing in your kitchen. If you’re losing your mind chasing perfection, it’s time to take a step back and rethink your approach. The right routine will feel more like a ritual than a chore, and you’ll be so much happier for it.