How To Cook A ‘Murder Hornet’

This week, the New York Times introduced many of us to the “murder hornet,” more accurately known as the Asian giant hornet. But a small subset of us were already familiar with this bug, because we’d eaten it.

Despite its size and the fact that it kills 50 people in Japan annually, the Asian giant hornet is also a delicacy. So, while you might have wondered how to kill it, I and Chef Joseph Yoon, founder of Brooklyn Bugs, wondered how to cook it. To highlight just how versatile these bugs can be, Chef Yoon crafted a selection of dishes that bring out the delicate flavour and texture, as well as the shocking appearance. 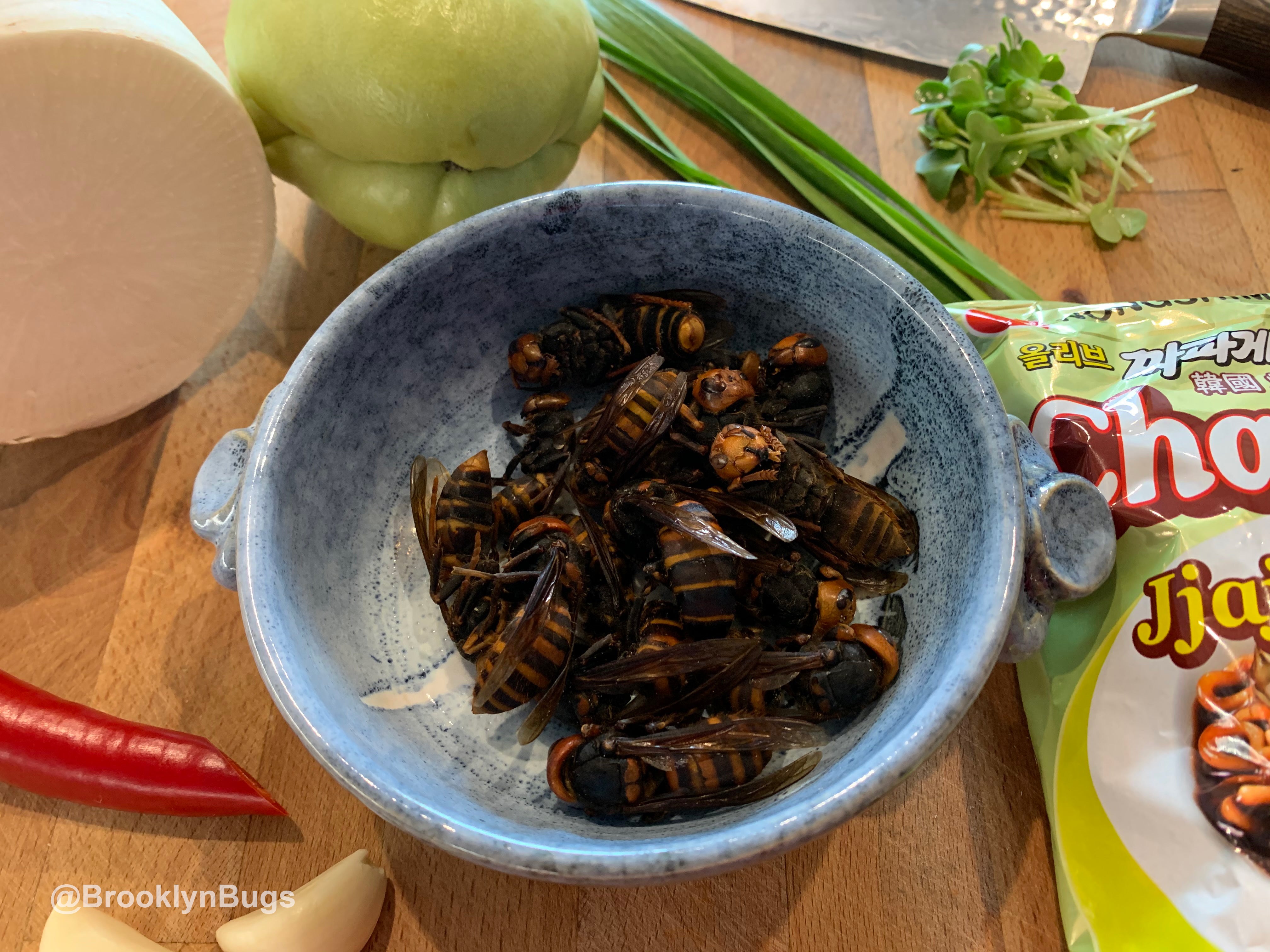 Preparing the hornets for a ram-don (Photo: Brooklyn Bugs)

First, if you’re totally lost, some background: Canadian keepers discovered a colony of these hornets in Nanaimo on Vancouver Island last spring. Authorities eradicated this nest. In December, a resident in Washington reported seeing two of these hornets as well—one was killed and brought into the Washington State Department of Agriculture, and the other flew away. These insects likely arrived in shipping containers, and it is unlikely that there are presently any beyond the vicinity of Vancouver Island, said UC Riverside Entomology Research Museum Senior Scientist Doug Yanega in an emailed statement. The moniker for these insects comes form their ability to kill bees, and they are a threat to bees in the United States that have not evolved defences to the giant hornets.

But enough of that. How do you eat them? Preparing the hornets for a spring roll (Photo: Brooklyn Bugs)

Many cultures around the world eat insects. The practice hasn’t quite spread globally, but a 2013 report by the Food and Agriculture Organisation of the United Nations brought a renewed interest to incorporate edible insects into our diets—they’re high in protein and other nutrients while being less resource-intensive. That’s especially important for a warming world that will need to feed 9 billion people by 2050.

Since Asian giant hornets are already a delicacy, Yoon was able to acquire them already prepared for human consumption from Entosense. 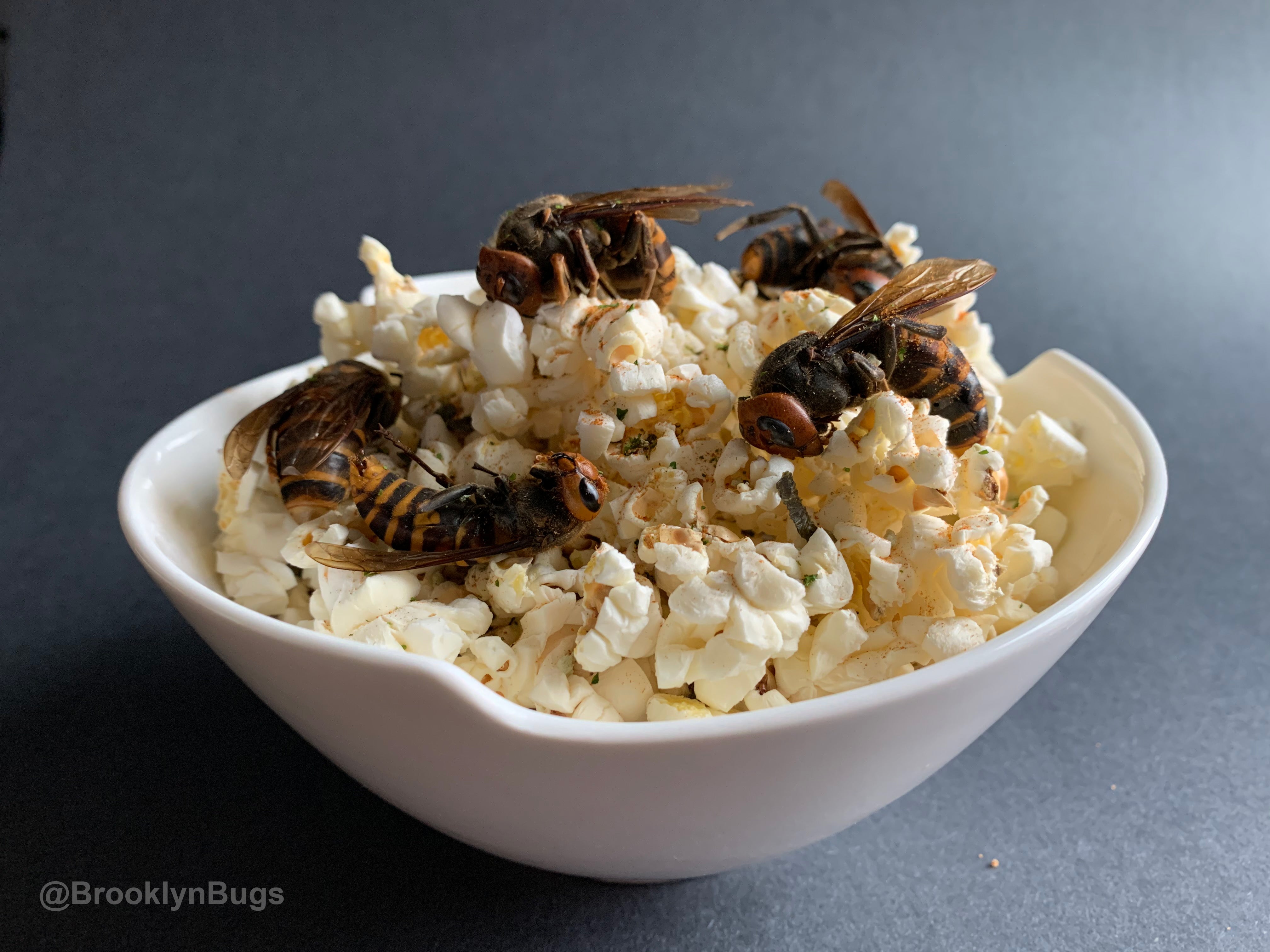 Yoon started the menu with a snack of popcorn served with the raw hornets on top to bring out the grainy flavours in the insect. He seasoned the popcorn with wasabi fumi furikake (a Japanese dried seasoning blend of salt, seaweed, bonito flakes, wasabi, and other flavours) and sal de gusano (a salt made from chilli powders, salt, lime, and gusano worms). Then he just placed the raw hornets on top.“If my sponsor tells me that it’s safe to eat, then I will always first eat it raw just to see what it tastes like,” he said.

It’s almost impossible to assign a flavour to something so unfamiliar to your palette, but he compared it to “a funky popcorn,” with a little bit of a grainy flavour, like flaxseed or wheat. Bugs have exoskeletons, so these large insects have a texture similar to a deep fried shrimp head that is eaten whole alongside a piece of sweet shrimp sushi, though perhaps a little less meaty on the inside. Lots of insects come with a “funkiness,” which I can personally describe as a sort of earthy or musty flavour (like the way an old basement smells but good); others compare the flavour to mushrooms. 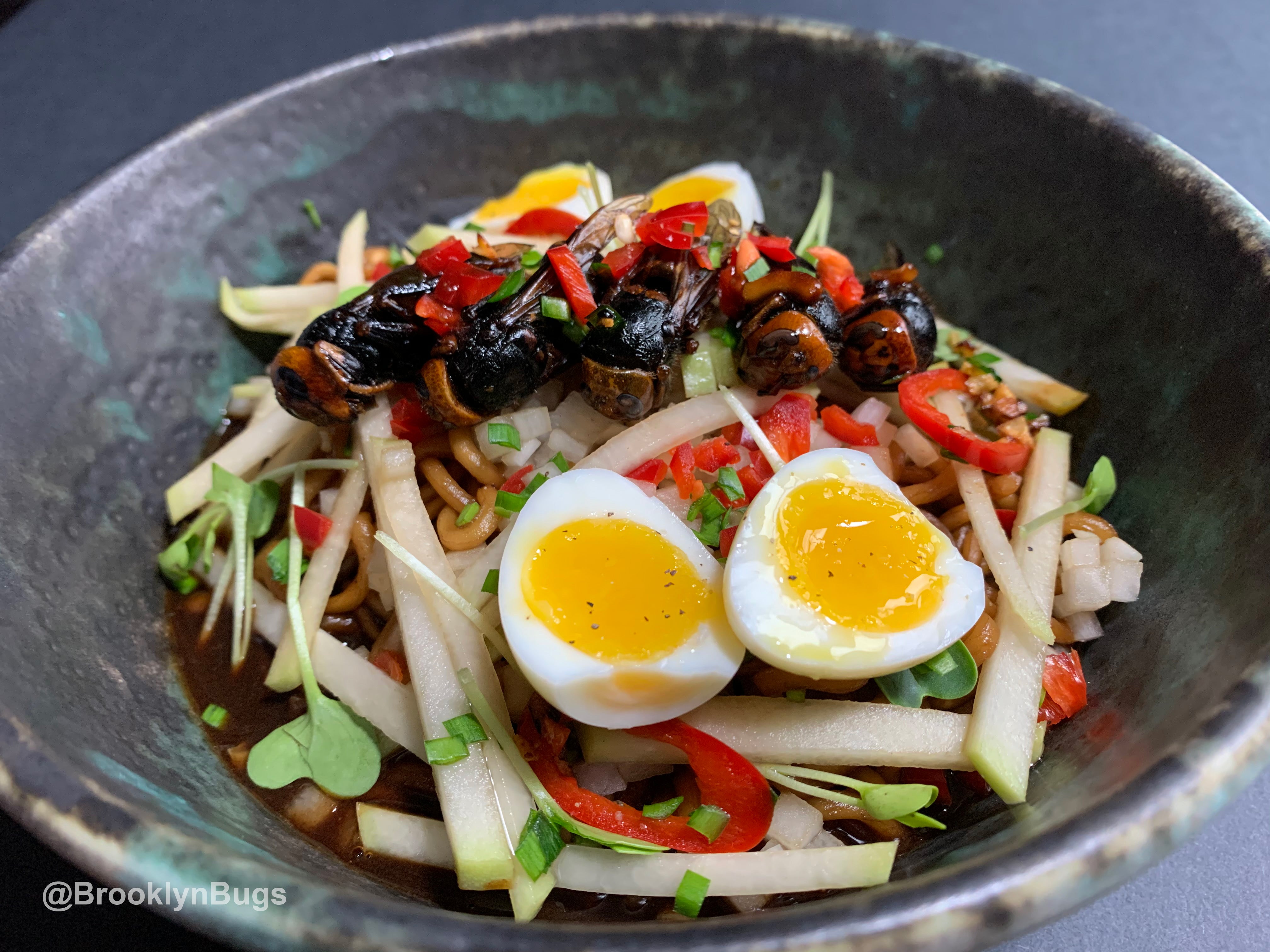 “This is just a very simple dish, no fuss, no muss,” he explained. “I just love to show and demonstrate how easy it is to add insects into our cuisine. People may criticise me and say, all you did was put it on top of popcorn. Yeah, and you can do that too.”

The harvesting and processing denatures the venom, so commercial murder hornets are fine to eat raw—however, folks with shellfish allergies will probably be allergic to some edible insects as well. Yoon said that if someone requested he take the stinger off, he would. “But we’re living in a pandemic. Live a little.” But you don’t have to eat them raw. For the appetiser, Yoon put together a spring roll full of hornets. First, he sautéed the hornets with onions, chilli, garlic and gochujang, the Korean chilli paste, in order to infuse the bugs with more flavour and aroma. He then mixed them with cooked mushrooms to highlight the insect’s funk, as well as a salad of radicchio, mint, parsley, cucumber, fennel, bok choy, and carrots for colour and crunch. He dressed the filling with a dressing that included cricket hydrolysates—a substance made from a process that separates and breaks down the proteins in the crickets—and wrapped the whole thing in a rice paper wrapper. He paired this with a hoisin sauce for dipping. 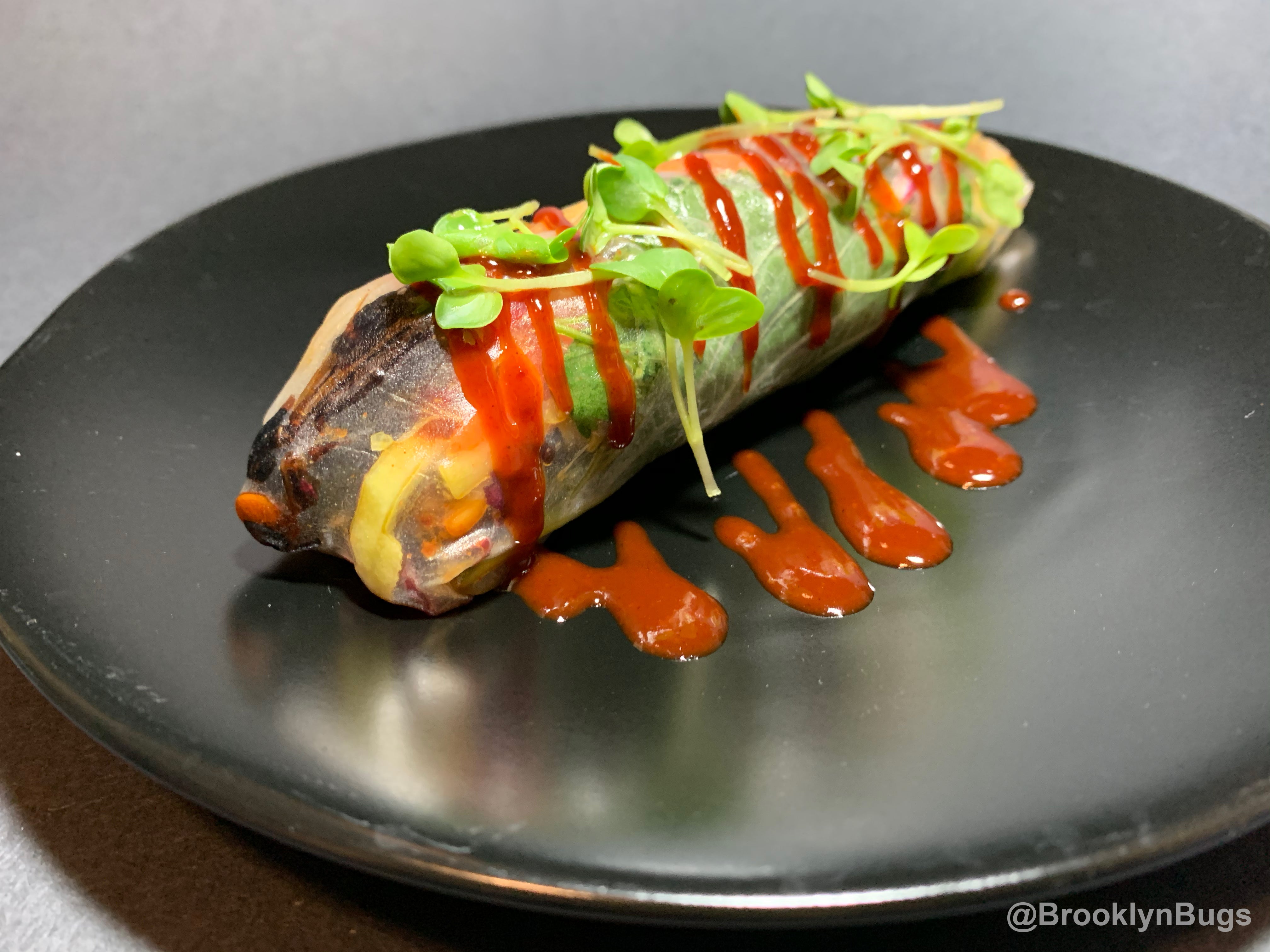 For the main, Yoon used hornets sautéed in garlic, chilli, salt, and pepper for a murder hornet ram-don, his homage as a Korean American to the infamous dish from the Academy Award-winning movie Parasite, as well as a nod to the fact that he, too, is stuck at home and must make dishes based on what he has around. Ram-don, or Jjapaguri, is a mixture of two popular Korean packaged noodle products: Chapagetti, meant to resemble a noodle dish called jajangmyeon, and Neoguri, a spicy seafood-flavored noodle soup. Yoon topped the ram-don with the hornets, and garnished the dish with daikon sprouts, chayote squash, chilli, chives, quail eggs. “It was a fucking smash,” he said.

As with all fancy meals, you have to have a drink; why not infuse sake with the hornets for a musty stinger sipper? “Nothing like a little liquid courage to get you to try something new,” Yoon said. 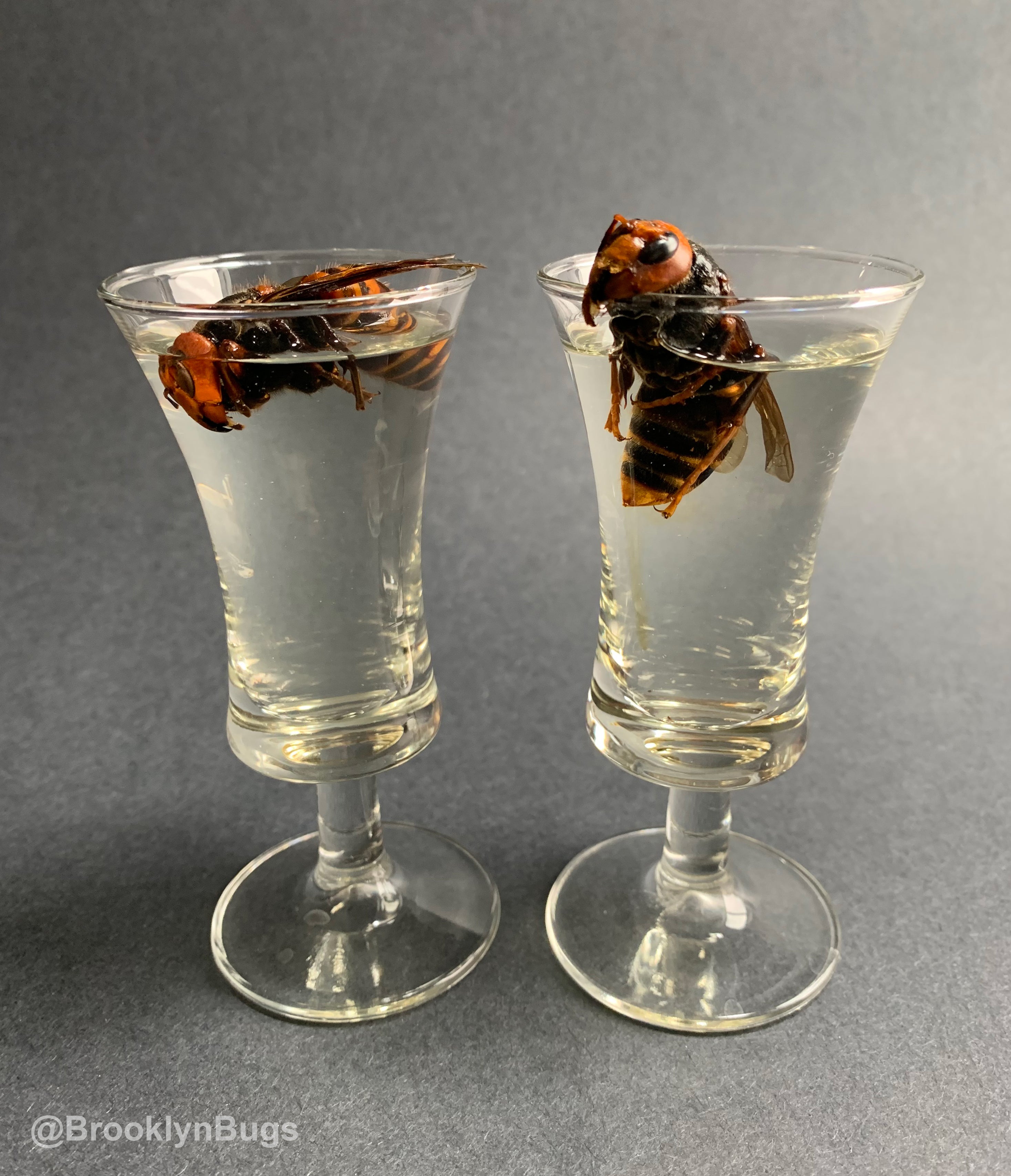 You don’t have to limit yourself (or your palate) to the giant adults—you can eat the larva too, which Yoon preserved in soy sauce and mirin, a rice wine used for cooking. The preserving process turns the soft insects into an umami bomb, which Yoon served with chilli powder and chives atop a six-minute hard boiled egg. 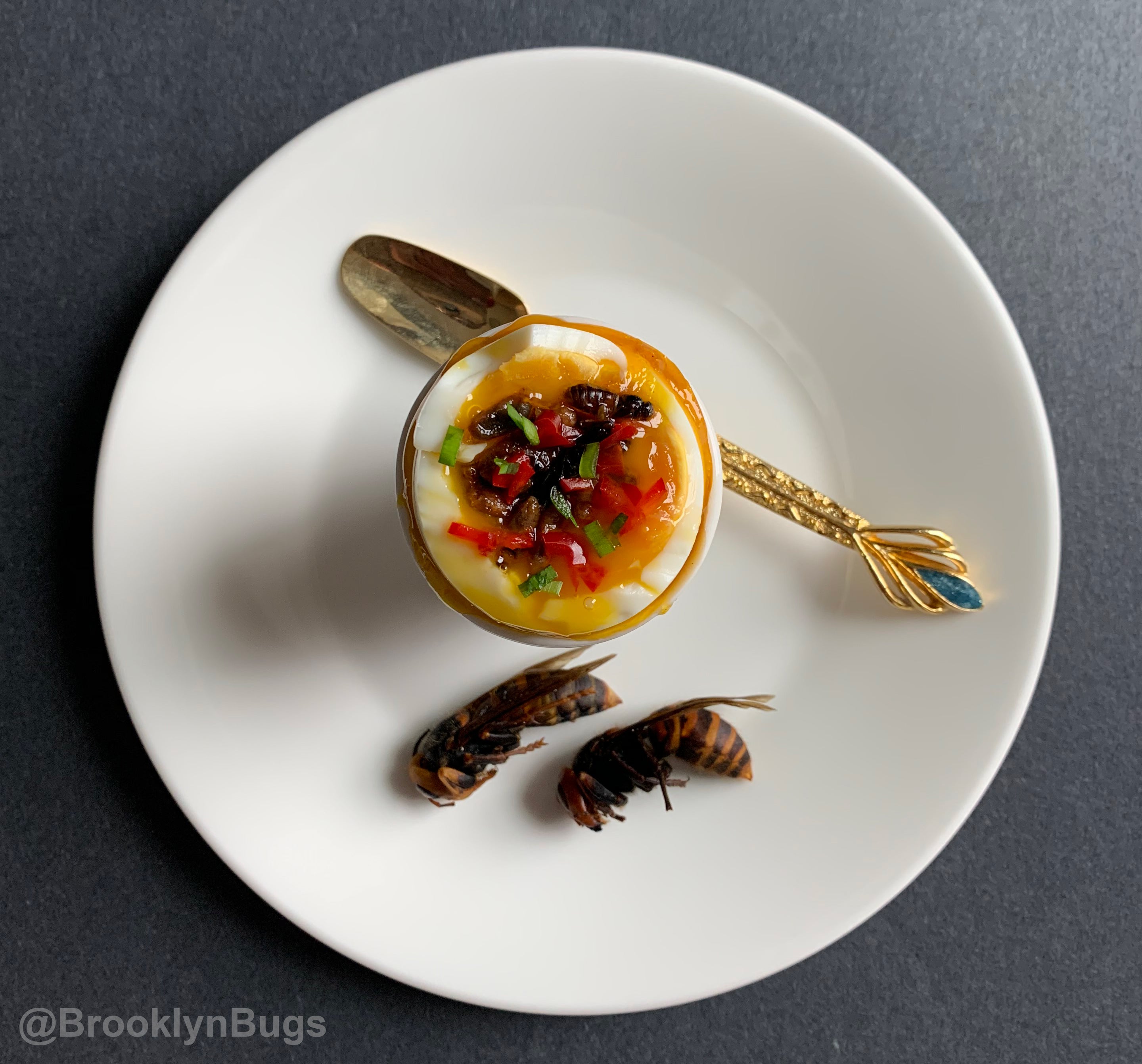 In terms of preparing them at home, you have a lot of options. Yoon receives the hornets processed and freeze-dried from the suppliers, so they don’t soften up much from boiling, but there are other potential preparations in addition to all those described above. You can deep fry them in a batter, or even grind them into a powder and mix them into a sauce or bread batter. But Yoon advised against the latter in the case of the hornets, since they’re pretty expensive. “Because of the difficulty in attaining them and the price point, I think they should be respected as an ingredient.”

While eating giant hornets might seem like a novelty, there are plenty of edible insect species already familiar to palettes around the world. Both Asian giant hornets as well as the smaller Vespula flaviceps appear in Japanese cuisine, while silkworm pupae, or beondegi, appears on Korean street food vendors’ menus. Grasshoppers called chapulines impart a salty goji berry-like flavour into some Mexican dishes, while formic acid, a defence mechanism, gives black ants a unique sour flavour. I personally have eaten these plus a cockroach (which taste like a less-sharp blue cheese), June beetle (which are intensely salty), locust (which also have a corn-like flavour) and even the invasive palm weevil (which tastes “funky”).

Eating insects sounds gross to some, but people do eat and enjoy them. It just takes a collection of recipes and a knowledge of best practices to transform them into a dish. If done properly, they can actually taste really, well, good.