Ms Marvel: What You Need to Know About the MCU’s Teen...

These Things Are Blocking Your Home’s Wifi Signal

How To Survive A Bee, Hornet Or Wasp Attack

Those buzzing insects in your backyard are more than a nuisance at your barbecue. In numbers, they’re a formidable threat. And if you’re one of the many people allergic to bees, hornets and wasps, even a few can be dangerous. Here’s how you can avoid getting swarmed, and what to do if you get stung. Illustration by Sam Woolley. Photos by Funk Dooby, Bureau of Land Management and Peter Burka.

According to Dr Joseph Forrester, a surgeon at Stanford University, and co-author of a 2012 review of US nationwide animal fatalities, bees, hornets and wasps are some of the deadliest wild animals you’ll ever run into:

…when you’re looking at attacks from wild animals only, the most common cause of death are due to venomous animals, like wasps or bees. I think people have in their mind that the most dangerous animals are cougars, bears or alligators, but a bee is more dangerous if a person is predisposed to a reaction.

In fact, for adults 20 and older, hornets, wasps and bees account for around 33 per cent of all animal-related deaths in the US, and many are due to allergies. Between 2000 and 2010 in Australia, bees killed 16 people – the same number killed by sharks. You can usually avoid hornet, wasp and bee attacks in the wild simply by staying away from hives and nests. If you leave them alone, they will leave you alone. So try not to disturb their homes. 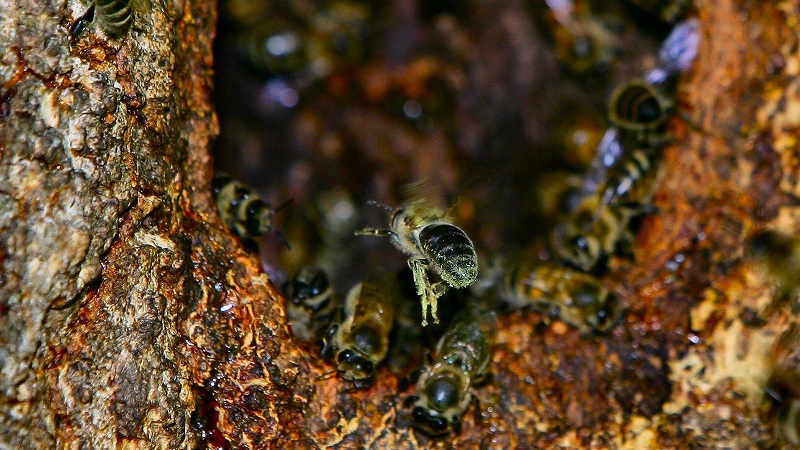 Honey bee hive inside of a tree.

Honey bee hive inside of a tree.

But if you know you’re allergic to bee, hornet and wasp stings there are a few extra precautions you should take since just one or two stings could mean game over. Make sure you always wear shoes outdoors; avoid wearing brightly coloured clothing; avoid sweet-smelling lotions, perfumes and shampoos; and wear pants and long-sleeved shirts if possible. And, most importantly, carry an epinephrine injection pen that you can use in emergencies.

While avoiding nests in the wild is pretty straightforward, it’s a different story when they try to make your home their home. These flying arthropods of the Hymenoptera order often like to build their nests in or around structures, like under the eaves of your house, in trees and bushes, and even on children’s playsets. 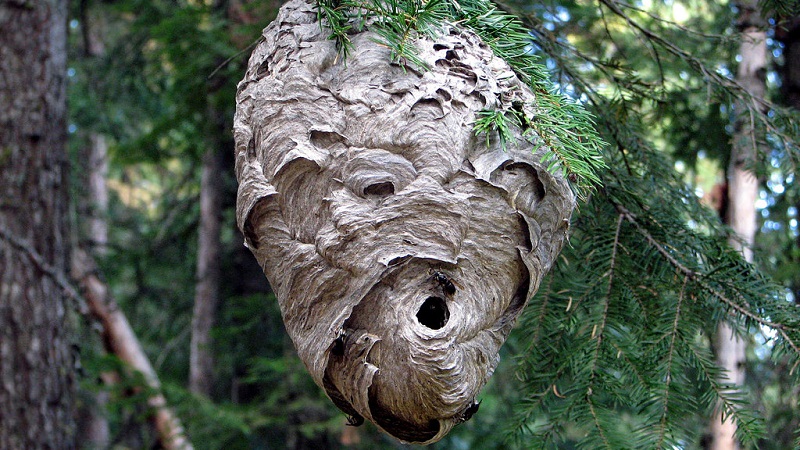 You can usually tell the difference between a bee hive, hornet nest or wasp colony based on its appearance. An umbrella-shaped nest with hexagonal cells is the home of paper wasps; a smooth, football-shaped nest belongs to hornets; wasps flying in and out of a hole in the ground or in building are likely yellowjackets; and if the nest is made of a waxy substance, you’re almost certainly looking at a bee hive. But bee hives can also be inside walls, hollow trees, sheds or abandoned rodent dens in the ground.

If you come across any of these nests around your home, consider calling a professional to remove them. There are a lot of sprays and traps on the market, but removing nests yourself can be dangerous, and you may not get them all without the proper tools.

If you’re being pestered by bees, don’t swat at any that them. And if you do get stung, leave the area immediately. Some bees, hornets and wasps release an “alarm pheromone” when they sting that could attract more bees to you. However, if you’re being surrounded by hornets or wasps, you have to be a little more careful. They’re more sensitive to movement, so as pest professional Simon Berenyi explains at Quora, flailing, yelling or running can make you look like more of a threat. Unless you’ve destroyed their nest or done something else extreme enough to cause a full-on swarm, you’re better off staying calm and moving away slowly with your head down, eyes closed and face covered if possible. 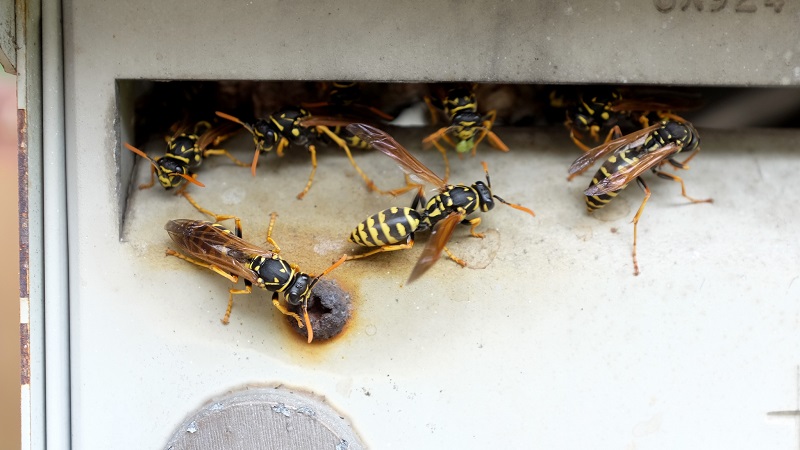 Wasp nest in an abandoned mailbox.

Wasp nest in an abandoned mailbox.

If you’ve destroyed a hornet or wasp nest, are being swarmed, or you’re being attacked by more aggressive flying insects, like so-called “killer bees”, the US Department of Agriculture has a few tips for escaping:

Even if you escape a swarm, you’ll likely be stung a few times. Honey bee stingers continue to pump venom into the wound as along as it stays in you, so it’s important to remove them as soon as possible. But do not try to pull them out with tweezers or your fingers since that will just squeeze more venom into the wound.

Use your fingernails, a dull knife blade or the edge of a credit card to scrape the stinger out of your skin sideways (as shown in the video above). Theoretically, the average person can handle about 20 honey bee stings per kilogram of body weight, meaning an adult can withstand more than 1100 stings. But that’s definitely not something you should test out — even a little bit. Even a few stings can be incredibly painful, not to mention deadly if you have allergies. Still, if you’ve been stung more than 15 times, are beginning to feel ill or have even the slightest inkling that you may be allergic, seek medical attention immediately.

This is part of Lifehacker’s Animal Attacks Series. As capable as we humans think we are, bears, snakes, wolves, sharks, and even bees can turn a fun day outside into a harsh, potentially life-threatening reality check. Here’s what to do when you find yourself face to face with some of the deadliest beasts in the great outdoors.