Stanley Tucci's Negroni Has Me Shaken, Not Stirred

They say rules are made to be broken, but you have to understand the rules before you can break them effectively. Cocktailing has a lot of rules, and a lot of rule breakers, but Stanley Tucci is breaking Negroni rules in a way that has me questioning if I really understood the drink in the first place. (I am, surprisingly, a big fan of rules. My rules tend to be different than other people’s, but once they are established, they are followed.)

May this video of Stanley Tucci doing a cocktail masterclass be a blessing upon your twitter feed. pic.twitter.com/62R1TjsAqA

On a recent TikTok video that made its way to Twitter, Mr. Tucci allowed us a peek into his home, life, and evening routine. He makes a Negroni for the phone holder (who I am assuming is his wife) but the way he goes about it left me with many questions. This makes sense, as Tucci is a man whose mere existence makes me ask a lot of questions. (Do I want him to be my dad? Do I want him to be my husband? The answers are unclear and confusing!)

Anyway. The video starts out fine. He uses a full two shots of gin, which is a bit more than I usually use (but fine), and says you can “use vodka” if you don’t like gin. I let that slide because personal preference is a thing I respect, and I don’t hate his bold idea of making a vodka Negroni with a gin floater. I also like the way he clinks the shot glass on the side of the shaker. It’s authoritative and commanding and it makes me trust him.

Tucci then pulls out a big bottle of my favourite sweet vermouth—Carpano Antica Formula—and my eye twitches because it does not look like he usually stores it in the fridge, but he’s just so confident I force myself to let it go. He goes on to diss Martini brand vermouth and tells us Campari is “made in Milan,” and I am once again ready to die for him. He then shakes the thing, smirking all the while, daring stupid cocktail people like myself to go ahead and question him, Stanley Tucci, Mr. Confusing Dad-Husband Man. He strains it into a coupe glass before squeezing orange juice—not zest—into the glass, and flirts a little bit with the lucky camera holder.

What a fucking ride.

The thing is, though I have a concrete concept of what a Negroni “is”—a stirred beverage made with equal parts gin, sweet vermouth, and Campari served on a rock—there are a lot of variations on this particular cocktail. I’ve had them up, and I like it just fine. Alice Newton likes hers a little more gin heavy. My friend Devojka (a cocktail genius) builds hers in the glass, tosses a big cube in there, and stirs it for about 10 seconds right in the lowball. (I have been making mine this way recently, and it’s amazing how it gets better as you sip it.) If you click the Negroni tag on this very site, you will find all sorts of bold and interesting riffs, but you won’t find a shaken Negroni, because it’s just not done.

Why? Because a Negroni is an all-booze cocktail, and those things are meant to be dense and silky, rather than light and fluffy (which is what you want for cocktails that contain juice and syrups and such). There are of course exceptions to these conventions, but that is generally how the “shaken or stirred?” question is answered.

When I reached out to Tucci’s publicist, asking for a chance to get some answers about his Negroni, I got a (swift, almost immediate) “No but thank you for reaching out,” which stung but was not surprising. I then decided to bug my bartender friends, who were quite nice and helpful, which is simply amazing given just how much I exploit their knowledge.

Though the un-refrigerated vermouth also gave Devojka pause, she felt that if anyone could pull off a shaken Negroni, it was Tucci. “My theory? He’s Italian. And he can do what he wants,” she told me over text. “It’s like a magic they have. When I’ve been to Italy they break literally every rule re: coffee and their aperitif cocktails and it always comes out perfect. He does use a slice of orange and not just a peel which I like, actually. It’s not per “modern classic” rules but I do it and prefer it that way. I also appreciate that he has a ritual, and it’s not this totally irreverent way of just getting the booze in your mouth.”

I then emailed Jeffrey Morgenthaler of Pepe Le Moko, and was only sort of surprised to find that—even though he had not seen the video—he was not offended by the concept, not even a little bit. “Send me a link?,” he requested over email. “I have written on my site before about shaking a Negroni. I don’t think it’s all that bad, it’s a strong enough and flavorful enough drink that it can handle a light shake. Certainly not an egg white Whiskey Sour shake, but a couple of cranks in the shaker for sure.”

All of this got me pretty excited to try The Tucci (which is what we’re calling shaken Negronis now), and I leapt from my couch (which is also my office) to whip one up. Sadly, when I arrived at my bar cart, I remembered I was out of Campari. (Damn you, rules regarding limited store trips!) But the next time I replenish, I’ll be trying it. After all, if anyone could convince me to break a rule, it would be Mr. Tucci. 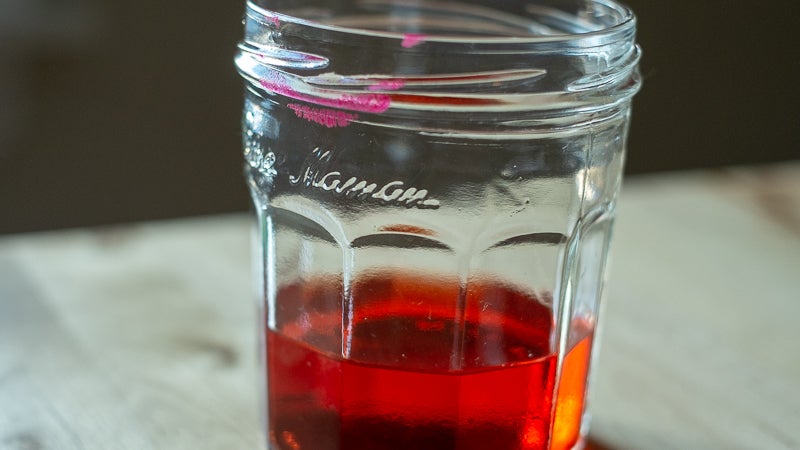 Indulge Your Inner Bitter Betty With A Classic Negroni

Happy weekend, everyone, and welcome back to 3-Ingredient Happy Hour, the weekly drink column featuring super simple yet delicious libations. Claire is busily filming exciting Thanksgiving video content, so this week is a guest post &mdash; written by me, A.A. Newton &mdash; dedicated to a true classic: the Negroni.