The Potato Skin Casserole Is A Cheesy Masterpiece

Potato skins are the weighted blankets of the food world—warm, comforting, and just heavy enough. And yet, we seem to have forgotten the appetiser that propelled TGI Friday’s into the global consciousness three decades ago. Potato skins—the bedrock of bowling alleys and dive bars—are an endangered species.

We’re going to save potato skins by transforming them into a casserole, using the scooped out flesh that every potato skin recipe tells you to “save for another use.” Here, those fluffy insides become a creamy, tangy layer of sour cream and chive mashed potatoes that balances the crispness of the skins.

This is not your standard midweek meal. So, of course, I tackled it midweek. I used half of a 35cm baking dish, but this recipe will fit snugly in an 8×8-inch Pyrex dish. It’s enough for two people (with leftovers) or a family of four, especially if you’ve got a hearty side-dish like pigs in a blanket or mozzarella sticks. Here’s what you’ll need to make it:

First, you’ll cook the bacon. I opted for slab bacon—fat pink slices—but you can use whatever bacon you like. Place a wire rack on a baking sheet and lay the bacon on top of it. Put the baking sheet on the middle rack of your cold oven, and turn the dial to 190 degrees Celsius. The bacon should be done in roughly 20 minutes. Now, the potatoes.

You probably bought a five-pound bag of russet potatoes. Take out three potatoes. You’ll have about three pounds left. Vigorously scrub, then dry the spuds with a dish towel. Poke holes in the skin with a fork. Toss the potatoes in a large bowl with two tablespoons of olive oil, Kosher salt and pepper.

The bacon should be nearly ready. Grab a pair of plates, and layer them with paper towels to soak up excess grease. Take out the bacon and turn the oven dial to 200 degrees Celsius. Lay the bacon on the paper towels and dab off a bit of grease. Grab a cutting board. Chop the bacon into little bits or fat squares, whichever you prefer. Save and strain the bacon grease that’s collected in the pan below.

Once that’s done, put your potatoes on the middle rack of the oven and cook for 60 to 75 minutes (the skin should be crisp, the insides soft). Take them out, and let them cool for roughly 10 minutes.

Keep a towel handy. Your hands might get a little slick from the olive oil on the potatoes. Slice the potatoes in half lengthwise (the longer way), and scoop the flesh into a large bowl. You want to have enough potato flesh left—about 1/4 inch—so that you can’t see the skin underneath.

Once you’re done scooping, use a pastry brush or the backside of a spoon to lightly coat the skins on both sides with olive oil (roughly three tablespoons). Sprinkle on salt and pepper. Nestle them, skin side up, in a single layer in your casserole pan. If you have extra skins, don’t worry. We can broil in stages. 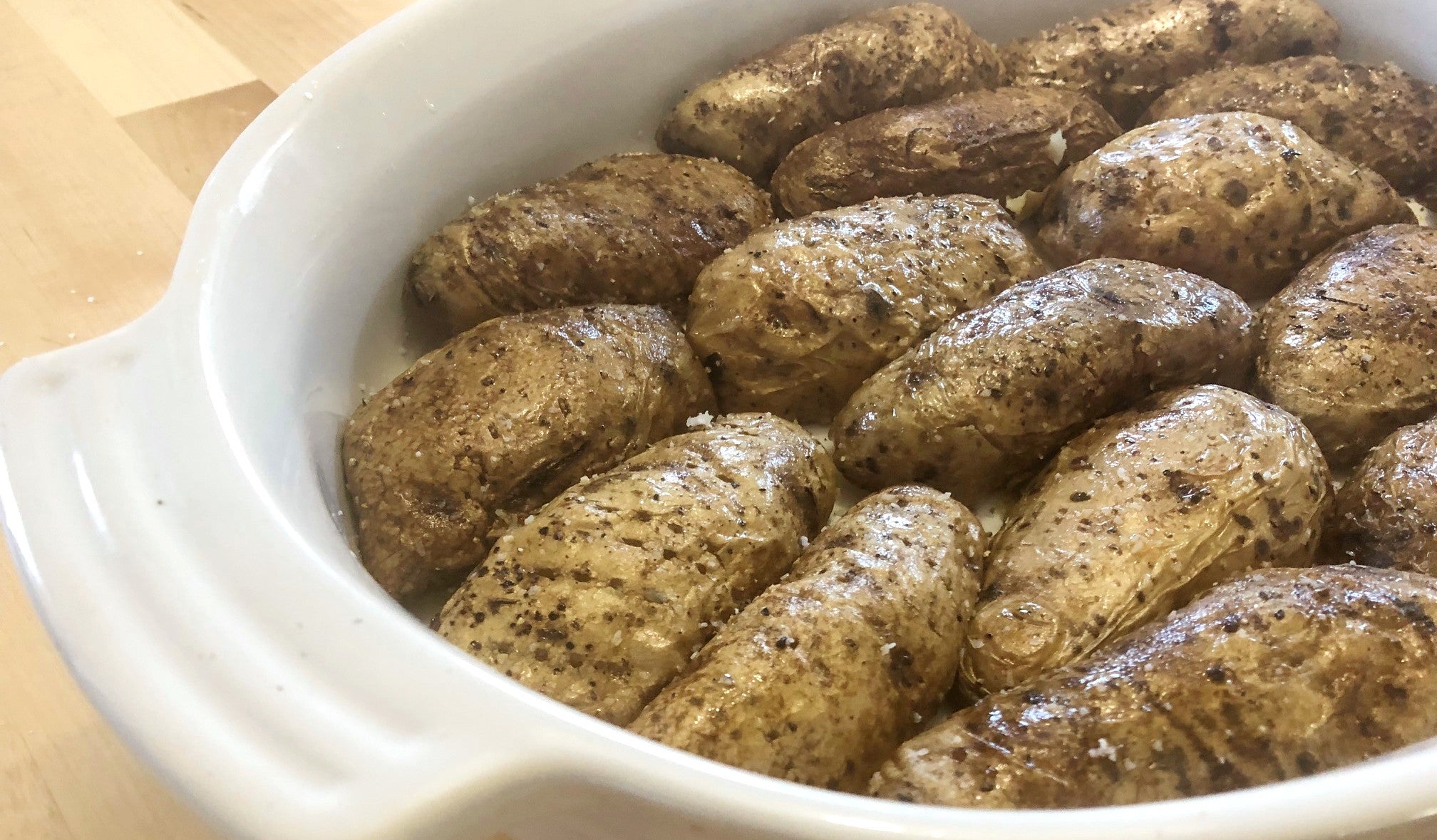 Tuck your potatoes tightly; but make sure they’re not covering each other. (Photo: Jonathan Bender)

Set your oven to broil and let it heat up while you turn the still warm potato insides into sour cream and chive mashed potatoes. Cut the three tablespoons of butter into small cubes (so it melts easier), and add them to the potatoes along with the half cup of half-and-half. Use a potato masher or wooden spoon to mix.

Salt and pepper to taste. Keep in mind, you’ll get plenty of salt from the potato skins, cheese and bacon, so the mashed potatoes can be a little under-salted. Cover the bowl with foil or place it in a warming drawer. 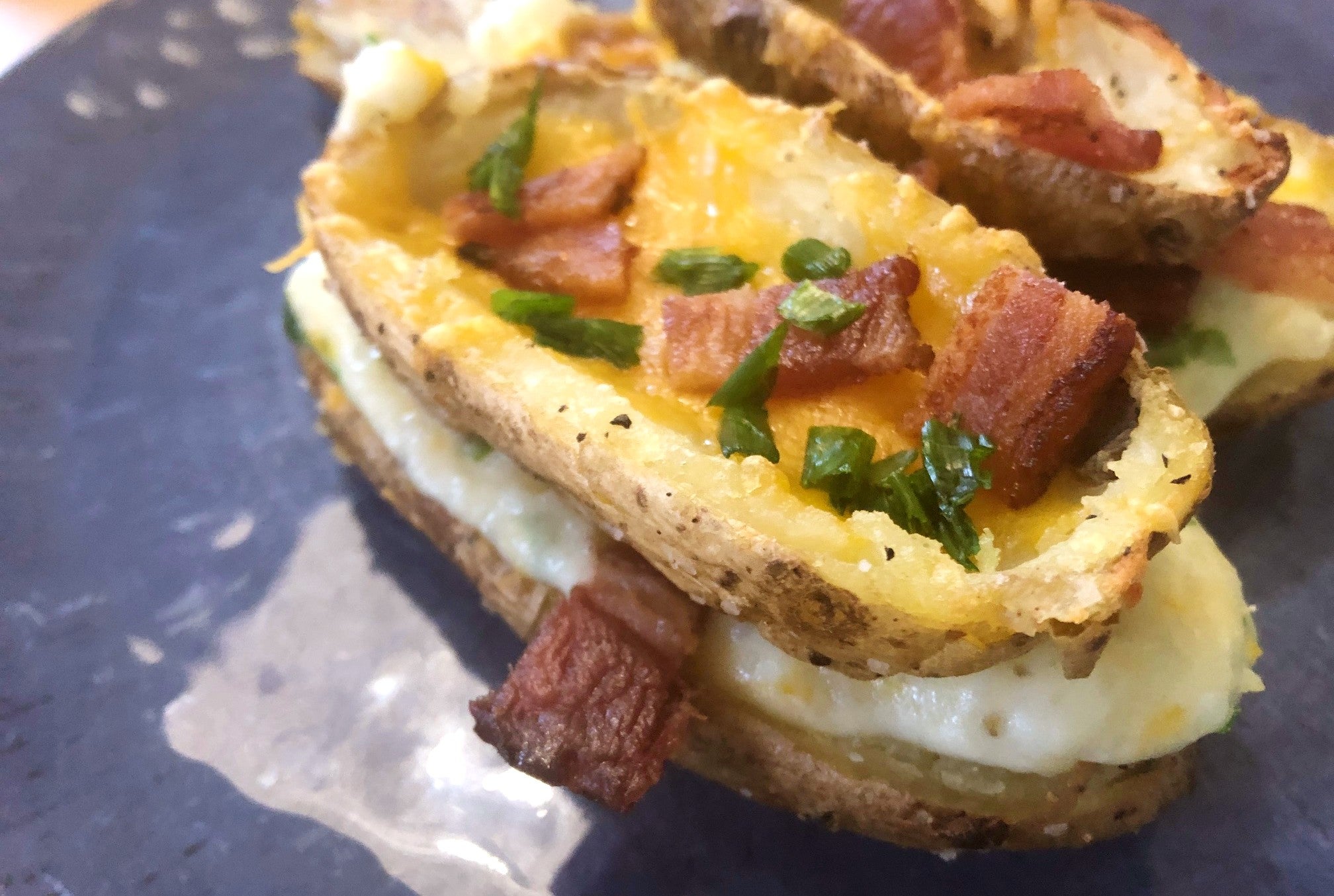 Crunchy. Creamy. Crunchy. These are everything you want in a potato skin and a casserole. (Photo: Jonathan Bender)

We’ve (finally) arrived at the potato skin part. Place your casserole dish full of skins on the oven’s middle rack. Set a timer for three minutes. You want the skins to feel crackly, but take care not to burn them. If they haven’t crisped up, give it two more minutes.

Take the casserole dish out. Flip the skins gently with tongs, and broil for five more minutes on the middle rack. Take the dish out of the oven. If you had extra skins that didn’t fit in your casserole dish, here’s where you’ll repeat the steps we just did.

Once your skins are crispy, take half of them and lay them skin side down on the bottom of your casserole dish. Cover the potatoes in a half cup of shredded cheddar and bacon bits, then use a spatula to spread an even layer of mashed potatoes on top of the skins. That layer should be as thick as your finger.

Place the top layer of potato skins, skin side down on top of the mashed potatoes and sprinkle them with the remaining half cup of shredded cheddar. Place the casserole dish on the top rack of your oven and broil for one minute. Check to see if the cheese is properly melted. If not, let it go for another 10 to 15 seconds. Serve the casserole immediately—fish spatula works great here—and garnish the potato skins with the remaining bacon, some more chives and sour cream.