Beware Of These Dodgy ‘Star Wars: The Rise Of Skywalker’ Download Sites

Rey and Kylo aren’t using the Force to peer into your mind and read your user names and logins, but plenty of hackers are. Multiple scammers have been setting up bogus websites and downloads to take advantage of Star Wars: The Rise of Skywalker buzz.

Needless to say, you should avoid them with as much precision as the Millenium Falcon in an asteroid field.

We can all agree that piracy is shitty, no matter if you loved or hated the latest Star Wars film, have already seen it six times, or whatever other rationale you or your friends might use to justify looking for a leaked copy online. If you don’t want to debate morals, here’s an even easier reason not to surrender to the dark side on this one: You’ll find plenty of websites promising “legitimate” downloads of the film, and these websites might even appear authentic due to their prominence in search results, social media, and other seemingly reputable websites.

Don’t get fooled. You’re going to run into a lot of sophisticated scams. As security researchers at Kaspersky recently described in a press release:

“The domains of websites used for gathering personal data and spreading malicious files usually copy the official name of the film and provide thorough descriptions and supporting content, thereby fooling users into believing that the website is, in some way, connected to the official film. Such practice is called ‘black SEO,’ which enables criminals to promote phishing websites high up in search engine results (such results often show up for search terms such as ‘name-of-the-film watch free’).”

Don’t get fooled by phishing promises 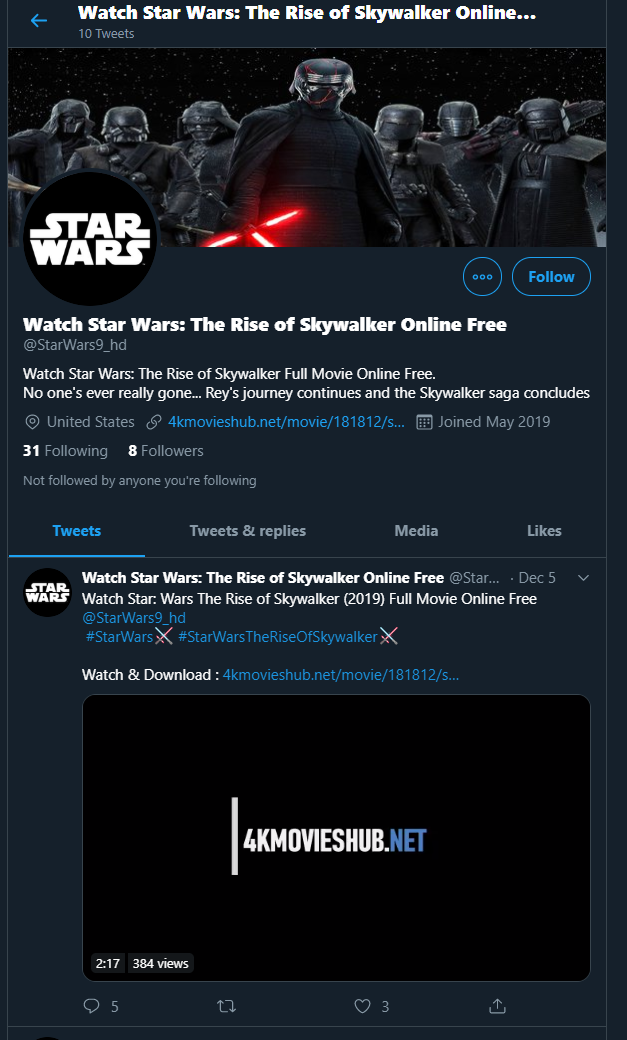 Remember the golden rule of the internet: If it feels sketchy, don’t do it. If a website asks you for any personal information in order to download or view Star Wars: The Rise of Skywalker, don’t give it up. If a website wants you to install an extension to see the film, resist. Don’t take surveys. Don’t download and install supplemental programs on your computer to get around buying a $US10 ($15) movie ticket. Don’t give out your email address. A movie file does not end in .EXE.

Whatever you do, don’t give up any financial information for anything related to your trying to find a popular, just-released movie for free. Don’t create a new account on a site using credentials you use elsewhere, in the hopes you’ll be able to unlock a special download. Look at the URL of the website you’re viewing to triple-check that it’s actually, say, the official site for Star Wars: The Rise of Skywalker. And use some common sense; we doubt said site would ask you for incredibly personal information to set up an account / access its contents / who knows what else.

Does this sound absurd? Are you rolling your eyes? I would be, too, except plenty of people have already been suckered by phishing attempts related to Star Wars: The Rise of Skywalker: 83 verified users as of when Kaspersky published its findings, with more 65 fake copies of the film floating around. And you can only expect these numbers to grow, as Kaspersky describes: