This Holidays, Confit Your Dark Meat 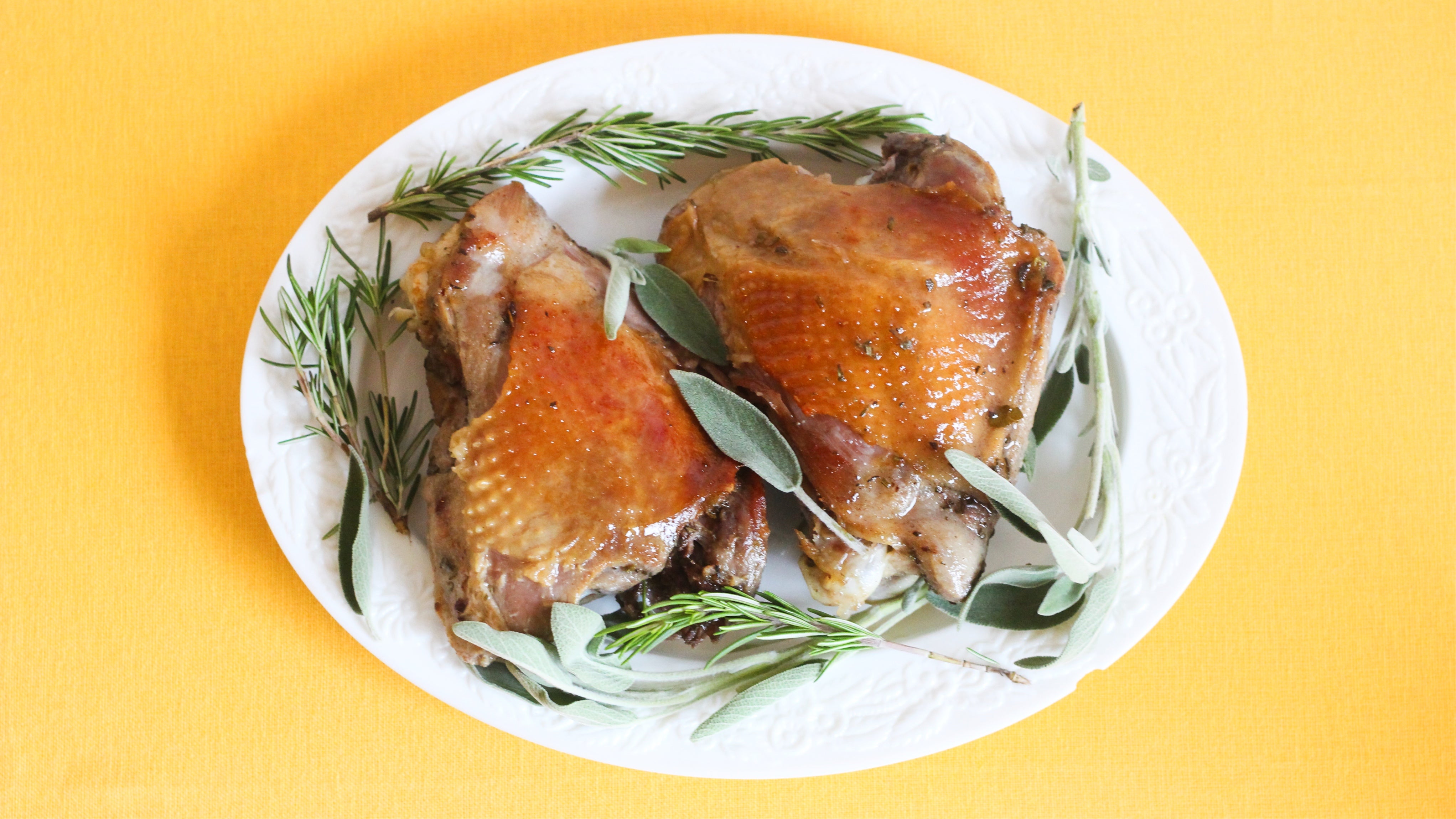 I have many turkey takes, but my strongest fowl conviction is that that the big bird is best when broken down into light and dark, and then cooked separately. Yes, you sacrifice the whole-bird visual, but honestly who cares? I would rather have it taste good.

With a chopped up bird, you can focus on the white and dark meat separately, ensuring each one shines. Rather than drying out your breast in your quest for tender legs and thighs, you can cook each one to their proper temperatures (which are a good 15 degrees apart!).

The drawback, of course, is that you end up cooking two different turkey recipes, but you don’t have to cook both of them on the same day. Confit turkey legs or thighs can be made up to three days ahead, then re-warmed and crisped up on the stove. And, since you’ll only be roasting a breast—I recommend my buttermilk-brined breast—the white meat will be ready much more quickly than a whole turkey would, freeing up oven real estate for casseroles and cornbread.

Most confit recipes call for the meat in question to be slowly cooked in its own fat, but turkey fat isn’t something you can buy in a tub. I thought about using duck fat, but the amount of duck fat one would need to confit four turkey thighs is frankly a little cost-prohibitive, so I pivoted to lard (which you can buy in four-pound buckets for around six bucks).

Fluffy, cloud-white lard is most commonly used to make carnitas, but cross-species confit-ing isn’t a crime. (And if it is, I dare the authorities to come and get me.) By cooking dry-brined thighs in melted lard, you get an intensely flavored, moist meat. You also get meat that tastes like turkey. Unlike smoky duck fat, lard doesn’t contribute much in the way of flavour, so you get unadulterated pure turkey goodness. (Duck-flavored turkey sounds pretty dank, actually, but some people are purists.)

This recipe was developed with four thighs in mind—which you can buy pre-butchered—but it also works just fine for two whole legs. If you want a meal comprised entirely of thighs, just scale it up. One thigh per guest is more than enough. To make lard-confited thighs, you will need:

Pat the turkey thighs dry and set them aside. Combine salt, sugar, and pepper in a small bowl, and mix with a fork to combine. Finely chop the fresh herbs and crumble the bay leaves, and add to the salt mixture. Mix once more with a fork to every distribute the herbs. (You can also chuck everything into a food processor, but I don’t like cleaning that thing.)

Place the thighs in a gallon-sized freezer bag, then sprinkle the brine on all sides of each thigh. Seal the bag and place it in the fridge for at least eight hours, up to 24. Flip the bag a couple times during the brining process if you remember.

The day before Thanksgiving (or up to two days before that), remove the turkey thighs from the bag, brush off any excess brine, then set the thighs down in a deep roasting pan. They should be quite snug, and have at least an inch of space above them. Preheat your oven to 110°C, and warm your lard over medium heat in a sauce pan until it is liquified. Pour the lard over the thighs, then transfer them in the oven and let them cook for four hours, until you can easily pierce the thickest part of the biggest thigh with a paring knife. Remove the thighs from the oven, and let them cool at room temperature for about an hour and a half. Pop the thighs in the fridge, and let them chill overnight (or longer).

When you’re ready to serve the turkey, place the roasting pan in a warm oven until the lard melts and the thighs can be easily removed from the fat. (You can set it next to a casserole or something; just keep an eye on it at higher temps.) Heat a nonstick pan over medium-high heat, then sear all sides of the thighs, paying particular attention to the skin. Once the meat is warm and the skin is crispy, serve immediately—garnishing with fried sage for extra credit.