I’m Joel Kahn, Lifehacker Senior Video Producer, And This Is How I Work

Every week, we share the shortcuts, workspaces, and productivity tips of our favourite experts. This week, we’re going behind the scenes at Lifehacker. I’m Joel Kahn, and this is how I work.

I learned to edit video when I was 15 and my dad let me sit in with his editor in the TV station where he worked. (My dad is a TV producer, so here we are.) Then I majored in film & TV in college, and wouldn’t let any other students work on my projects so I wrote, shot, lit, edited, and animated everything myself the way I wanted it. After that, I had several jobs creating sponsored videos and making my own web series, so I ended up here to lead the team and make videos about everything Lifehacker covers.

If I am not on a shoot, I’ll arrive around 9:45. Catch up on emails and Slack, review recent video cuts from the rest of the video team and provide notes. Then besides meetings, most of my time is spent scripting/researching new video ideas, editing upcoming projects, and going to the kitchen for snacks roughly 12–15 times a day.

For a shoot day, I’ll probably have to get some props in the morning, then go to our video studio (or conference room, or someone’s apartment). Our shoots typically last about 2 hours, which is very short. We’ll only have 3–4 people on set, so everyone is very busy all the time.

As soon as we’re done shooting, we back up the footage twice, and if it’s a quick-turnaround deadline, I’ll start going through the footage and selecting the parts I like right away. Then I leave around 6.

We use a website called Frame.io to review videos. It lets you put notes directly in the timeline and I love it.

I also have an app on my phone called TurboScan that allows you to take a photo of a document and turn it into a PDF. I use that for whenever we get signed releases from people in the videos.

And then all of our scripts are on Google Docs, which lets anyone add in feedback to a draft. And I have a big Google Sheets tracking document with all our current and past video projects. 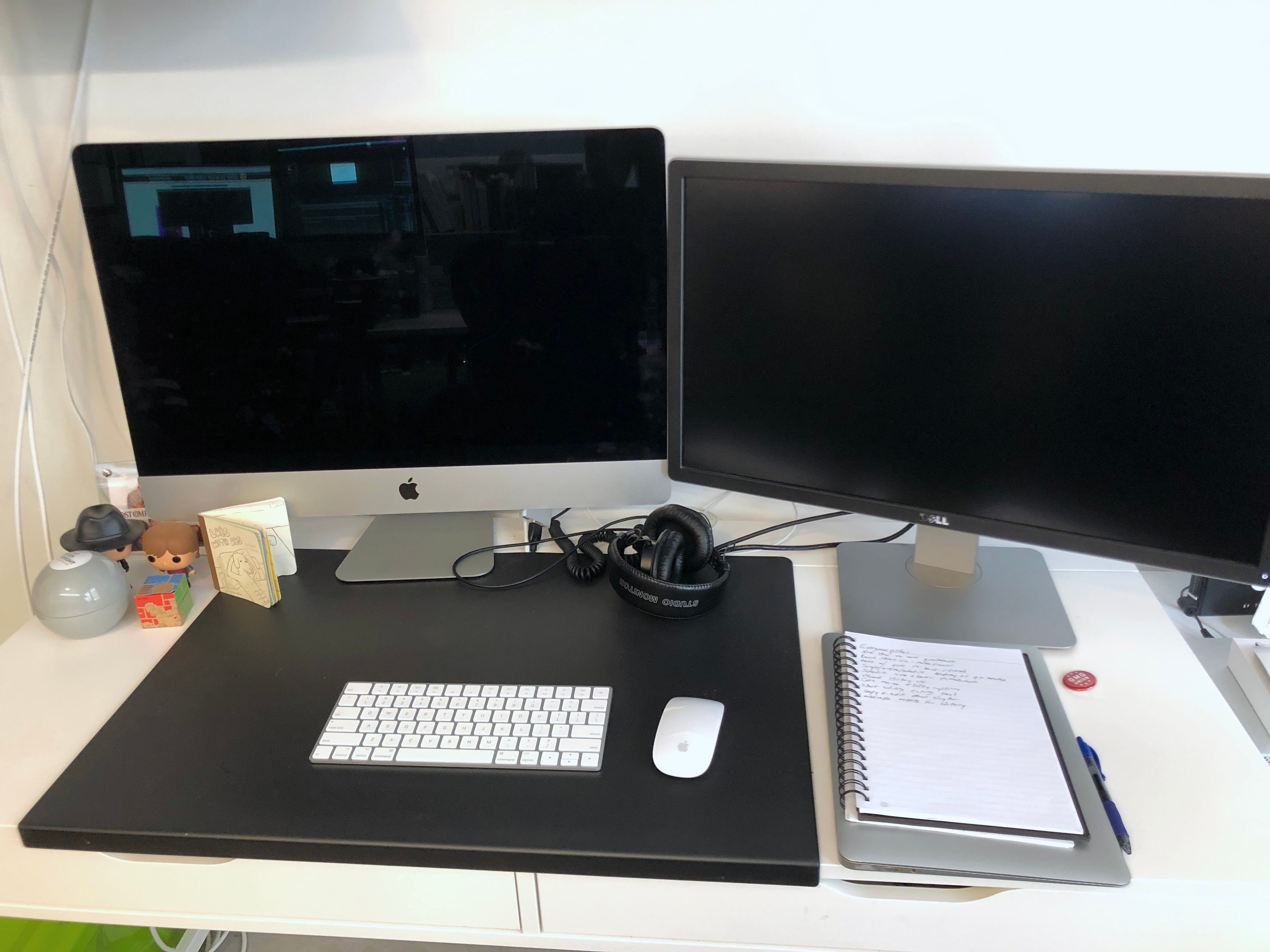 I have a 27″ iMac with retina display, and another 5K monitor right next to it. I keep my to-do list in a physical notebook so I can satisfyingly cross off tasks as they’re finished. I also take this notebook to meetings so I can pay attention and not get distracted by a laptop. Then there are some tchotchkes to the left of my monitor, including the crowd favourite Labs with Abs, and I have a drawer full of napkins.

If you are at a concert, or some type of live event where everyone leaves at the same time (and probably heads to the same subway stop), then use the app Car2Go to reserve the closest car just before the event ends. They have it in a bunch of cities now, and you have 30 minutes to reserve the car and just drive away. It’s perfect, and you get to just zoom past everyone trying to funnel onto a bus or train.

Our current system for publishing videos involves several separate processes that were stuck together throughout the years. I’ve had to make an entire step-by-step document to lay out all the steps, but essentially after the video is totally finished, we have to send it out to get captions (we use a site called Rev), make a thumbnail image, upload it to our proprietary video hosting site, post that into a blog, and send everything to our social channels. This process is out of my control, but there is talk of streamlining it soon.

We have a three-person video team. In addition to me, there’s our producer, Adam, and our creative producer, Heather. They both shoot and edit and animate, so we can all help each other to finish videos. There are also a couple floating shooters that work with all the GMG sites, so we’ll usually take one of them on set with us. I rely on all of them because videos need to keep getting finished and posted (see lengthy process above), so I need to stay focused on upcoming ideas, scheduling future shoots, and making sure everything we put out meets our standards.

I have a Google spreadsheet with all our active projects. I look it over and over, to make sure I know what still needs to be done for each video. My current tasks are written out in a notebook on my desk. And also I never forget anything. 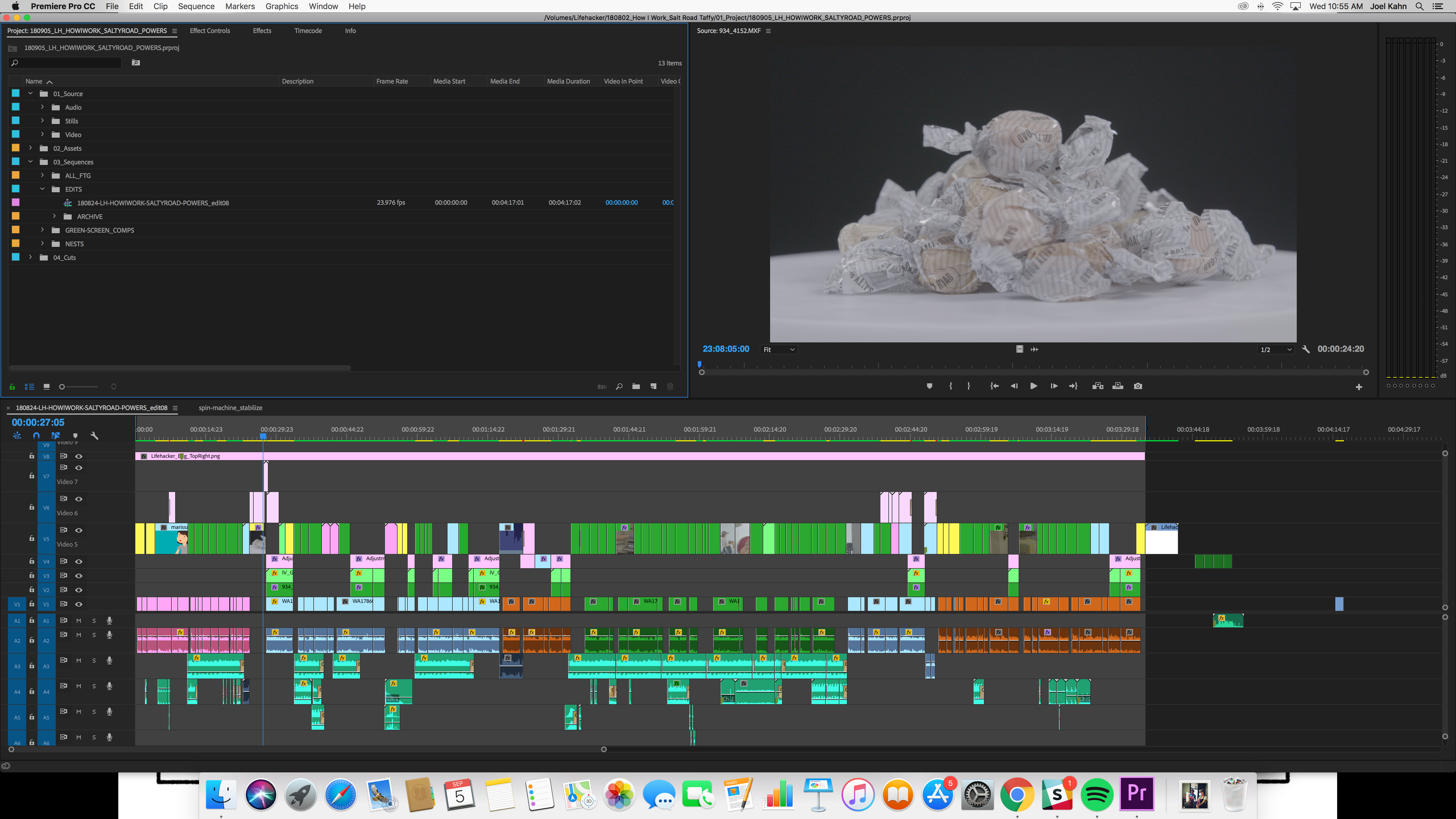 I occasionally edit videos for friends on the side. These are mostly corporate sizzle reels, so they just send me the footage, I put large text and a fun song in, and I send it out. My previous jobs were to make videos like this all day long, but now that I am making fun videos at work, I have free time to make these more cookie-cutter videos (which also tend to pay pretty well).

I’m reading Meet Me in the Bathroom, which is 600 pages of oral history about indie rock in New York in the 2000s. It’s great! I’m almost done and can’t wait to see what happens with this band called “The Strokes.”

This was from my first boss at my first job, and she told me when you are making something with a brand’s name on it, then the product exists to serve the brand. It’s not your personal art, so you shouldn’t take any notes or changes personally.

What videos people want to watch.