Instead Of Lime And Salt, Drink Aged Tequila With A Grapefruit

If your keen on a few aged tequila shots today, consider ditching the line and salt with those shots for a grapefruit with a dusting of cinnamon instead.

Last year I spent a good deal of time travelling around Mexico visiting tequila distilleries (tough job, I know). I learned a ton about the spirit, but one of my favourite tidbits came from the folks at Cazadores who suggested swapping out the fruit used to chase those shots.

According to them, the whole lime and salt thing was invented back when people were drinking some pretty gnarly tequila.

If you’re shooting cheap blanco tequila (the clear stuff) then the tradition probably still works. If you’re opting for an aged tequila like a Reposado or Añejo; however, then you’d be better served replacing the lime with a grapefruit and the salt with a light dusting of cinnamon. 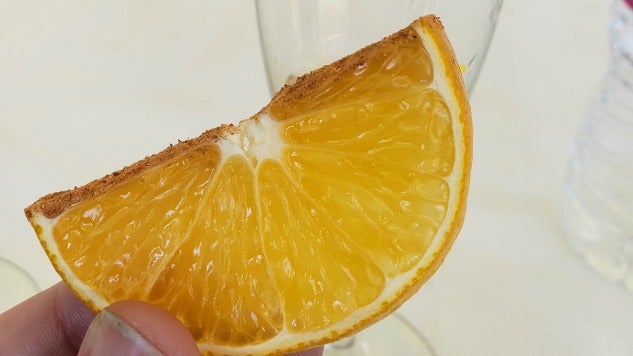 Reposado and Añejo tequilas are darker due to the fact they’ve been aged in barrels before they’re bottled. Reposado tequila has been aged at least two months and up to 11 months in an oak barrel, and Añejo a year or more.

The grapefruit and cinnamon combo is better suited to bring out some of those amazing flavours that come from that ageing and can make for a much better experience.

Even better, try drinking an aged tequila like you might a nice whiskey. That same trip I personally fell in love with Extra Añejo tequilas (those that have been aged at least three years and a day in the barrel). Those can be delicious straight or with a few cubes of ice and are a lot classier than pounding shots of the cheap stuff.