There’s More To Beef Chuck Than Stews And Braises

While steak enthusiasts are eager to bend your ear about home dry-ageing experiments or that massive tomahawk they splurged on, it’s medium-rare to hear someone rave about chuck steak. Talk about a missed opportunity: Chuck is an incredibly flavorful, versatile and affordable part of the cow. Treat it right, and there’s nothing it can’t do.

You probably already know that beef chuck, which comes from the shoulder of the cow, is a killer cut for stews and braises. In that respect, it has everything you could ask for: Fat, flavour and plenty of connective tissue, all of which make for a deliciously rich braise.

Cook it sous vide and all that fat and collagen bastes the meat from the inside out, giving you a centrepiece-worthy roast to rival even the fanciest prime rib.

How To Make Chuck Steak Taste Like Prime Rib

Hello, my friends, and welcome back to Will It Sous Vide?, the column where I usually make whatever you want me to with my immersion circulator. This week we're using our precisely controlled water bath to transform something somewhat pedestrian into something quite special.

But there’s so much more to chuck than “prime fib” and boeuf bourguignon. (Although, to be clear, it is the choice for those.) It’s chock full of flavorful, tender meat, which is just as suited to a hot pan or grill as it is to a Dutch oven — and far less expensive than comparable cuts from other parts of the animal.

If you’re a burger freak or a steak lover on a budget, chuck should be your first choice every time. Here’s why.

Custom burger blends are trendy these days, but whether they intend to or not, they all reverse-engineer the characteristics you get from ground chuck: A good ratio of fat to meat and a lot of rich, beefy flavour.

Experimenting with other cuts gets expensive — and as industrial-organisational psychologist, former butcher and longtime friend Trey Trainum told me, it probably isn’t worth it:

There used to be a rich arse guy that would come into my old job, and ask for a whole (!!!) tenderloin ground. What people don’t realise is that tenderloin actually has a ton of connective tissue in it, that we usually trim off. So here’d I be, throwing a $125 [$AU175] tenderloin in the grinder, silver and all, and giving this dude probably the shittiest ground beef he could ever ask for.

Sure, you could fiddle around with different ratios of sirloin, short rib and brisket, but why bother? Burgers should be simple: All you really need is freshly-ground chuck, a hot pan and plenty of salt.

You Probably Need To Salt Your Burgers More

The importance of salt can not be overstated, particularly when it comes to meat. Though I’ve never not salted my ground beef before smashing it in the pan, it took a trip to a faraway land for me to realise that there was still room (on the patty) for improvement (more salt).

It’s true that chuck gets tougher and tougher the closer you get to the head of the cow, but the sections that border the ribs are juicy, tender and incredibly delicious.

Take the chuck eye, for example: It’s the same muscle as the ribeye, but further forward on the cow. Of course, shoulder muscles work harder than rib muscles, so they’re not exactly the same — but they are pretty damn close.

“[The chuck eye] is the two-or-so inches that connects the chuck muscle to the loin where the ribeyes start,” Trainum explains, “so structurally speaking, it’s basically a semi-ribeye steak.

If you see chuck eyes in the grocery store, snap them up. As with any steak, a shower of salt and some time in the fridge is all a chuck eye “needs”, but a koji and fish sauce massage will really take the flavour over the top.

Even if you have a great butcher, chuck eyes can be hard to find. A well-marbled boneless chuck roast — which often includes a portion of the eye — is the next best thing.

Trimmed up, pounded thin and marinated, the humble chuck roast has been my cut of choice for steak fajitas for years: Between the pounding and the marinade, it’s tender as you like, with unbeatable flavour. Sure, it isn’t as melt-in-your mouth tender as a true ribeye, but the taste is nearly identical — and for a third of the price, I can’t say that I mind. 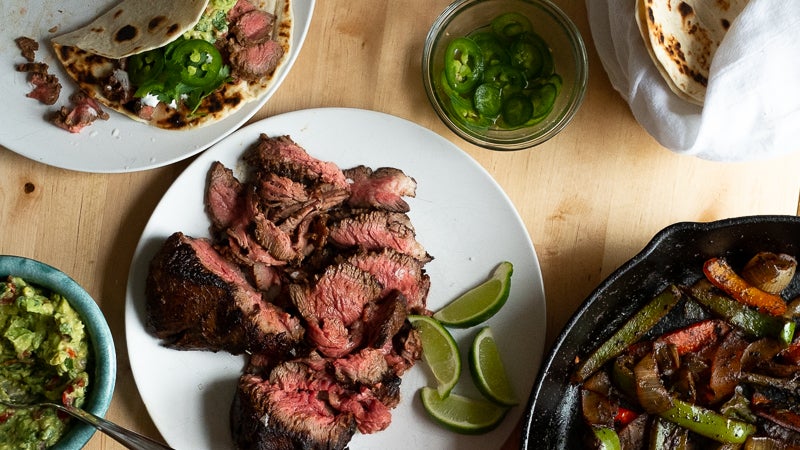 If you can find chuck eye steaks, definitely use them here — but if you can’t, a boneless chuck roast with great marbling will work nicely. All chuck roasts have a load of connective tissue, so ignore that and focus on the fat running through the muscles. You want as much as possible: Lean boneless chuck makes good pot roast, but terrible steak.

For the marinade and onions:

For the steak and peppers:

First, make the marinade: Combine all of the ingredients in a large mixing bowl and purée with a stick blender until nice and smooth. If you don’t have a stick blender, use a regular blender to purée everything except the beer — which will foam up and maybe overflow — into a smooth paste, then transfer to a mixing bowl and stir in the beer.

Add the sliced onions to the marinade and let rest while you prepare the steaks. (If you’re using chuck eye steaks, proceed to the pounding and marinating steps — they don’t need breaking down.)

Hone your knife so it’s as sharp as possible, then lay your chuck roast on a large cutting board so the main strip of connective tissue runs horizontally. Use the tip of your knife to cut along this tissue, separating the roast into two segments. Trim off as much of the membrane from both sides as you can. 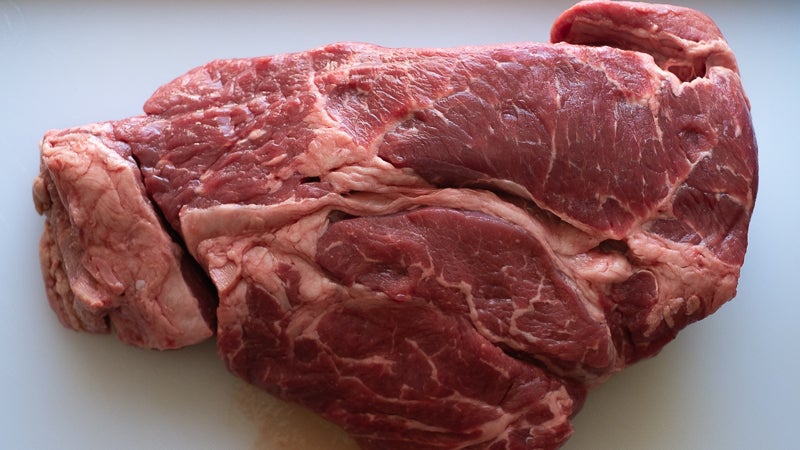 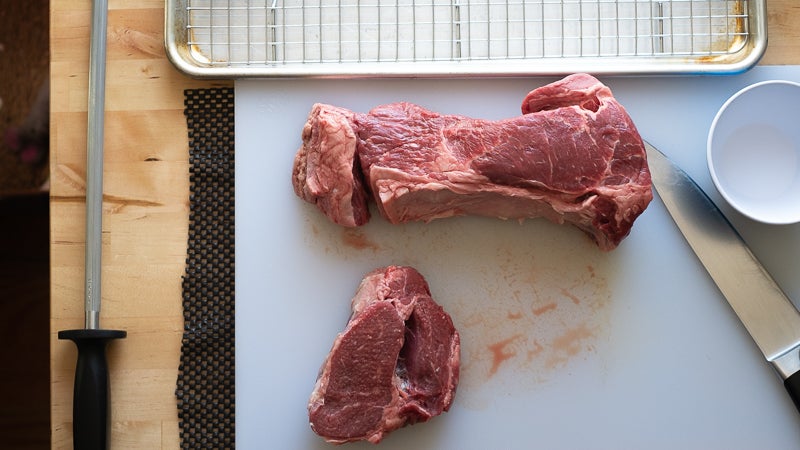 From here, you can either leave the two main parts as they are or you can keep breaking it down. I like the latter because it further separates the well-marbled meat from the gristle, which doesn’t break down when pan fried. Plus, smaller steaks absorb more marinade and cook faster.

Look for any more thick veins of connective tissue, and use them to guide your cuts. Be sure to trim off the biggest pockets of hard fat, too, which you can save for another use if you like.

I also trimmed off and reserved any especially fatty or membranous pieces — those are best for stewing or braising — but you can use every last bit of trimmed meat. The fatty parts have incredible flavour, and we’re going to tenderise them anyway. 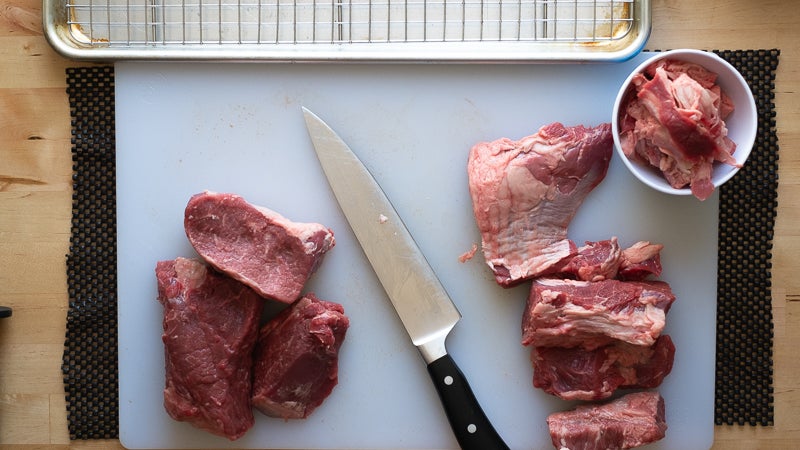 I used the segments to the left of the knife for steak. (Photo: A.A. Newton)

Speaking of which, grab a heavy frying pan and a sheet of plastic wrap, and arrange the trimmed chuck pieces on the cutting board so the grain runs parallel to the surface of the board. Piece by piece, cover the meat with the plastic and bash them with the frying pan on both sides until they reach your desired thickness.

Flatten them slightly for thicker steaks, or go for broke and pound them out to cutlet thinness; as long as they end up roughly the same thickness, it’s all good. I made mine roughly 2.5cm thick, but should have gone for half that — they seized up in the marinade. 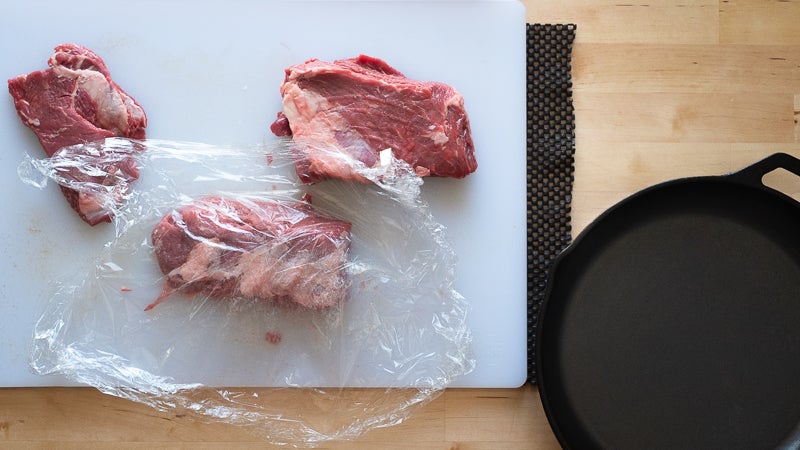 Transfer the pounded steaks to the marinade and mix thoroughly with your hands or a spoon. Press a sheet of plastic wrap directly on the surface of the marinade to keep everything submerged. Refrigerate for at least two hours, or overnight. 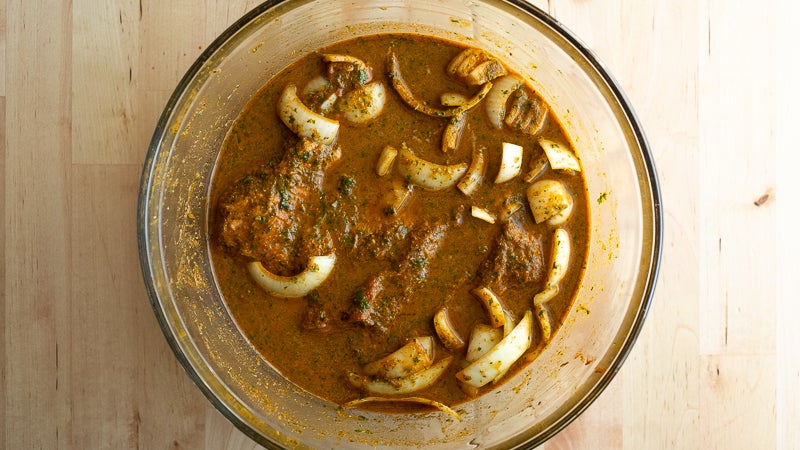 About an hour before you want to cook the steaks, remove them from the marinade, pat dry and transfer to a baking sheet with a rack over top. Rest at room temperature until they’re no longer cold to the touch, about an hour. Meanwhile, drain the marinade off the onions and combine them in a bowl with the sliced peppers.

Open the windows in your kitchen and turn on a fan, if you have one. Heat a wide cast-iron or stainless steel frying pan over medium-high heat for three minutes before adding your cooking oil. Continue heating the oil until it shimmers and you see a few wisps of smoke coming off the surface.

Carefully press the steaks in the hot oil and cook, turning as frequently as you like, until the interiors register 51.6C (for medium-rare) or 57.2C (for medium) on an instant-read thermometer. Repeat as needed, if you had too much steak for your pan. As they finish cooking, transfer the steaks to a platter or cutting board to rest for 10-15 minutes.

Increase the heat to high and add a little more oil if the pan looks dry. Add the capsicum and onions to the pan and cook, scraping up all the burnt goodness from the bottom of the pan, until they’re browned in spots and just barely tender. This should take somewhere between five and 10 minutes.

Slice the rested steaks diagonally against the grain into the thinnest strips you can manage, and pile into tortillas with capsicum, onions and whatever other fixings you like. But don’t feel pressured to pull out all the stops — in my experience, most of the steak never makes it into a tortilla. 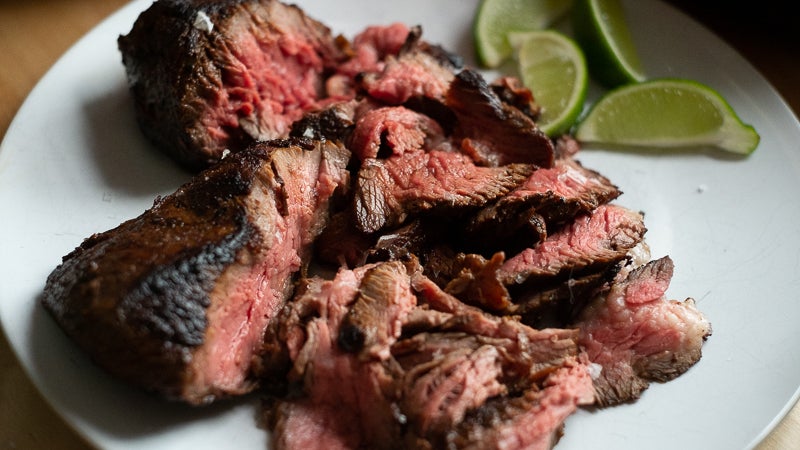