Quickly Convert Your Written Notes Into Digital Ones With This App

When it comes to taking notes, I’m still very much old school. I have a small notebook always in my purse, and I really like taking paper notes when I’m at press events, wine tastings, or just trying to make vacation plans with friends. While I really enjoy taking those paper notes, there always comes a time where I want those paper notes to be digital. Brill is an app that can help.

Brill is an iOS app that allows you to transform those written notes into digital ones simply by taking a picture of them. So I can take my elaborate paper notes in that notebook, snap a pic, and then instantly have a digital version I can send my friends. I once had a fancy digital pen that did the same thing, but required you to use special paper — this works on everything from cocktail napkins to post-it notes.

iOS/Android: There's one part of being a reporter that I absolutely despise: Transcribing.

That said, it’s not perfect. Brill notes that you need to use clear handwriting and not overlap your notes in order for the feature to work, which let’s be honest, is easier said than done sometimes. While most of my notes probably fit that bill, when I’m taking tons of notes at an event where there might be a lot of talking, the faster the talking the sloppier my writing ends up being and the sloppier Brill’s translation will be.

The real advantage here is getting a ton of it digitised at once. Depending on the quality of your handwriting, after that, you can clean up your digital text to make it correct.

You can also use the app to capture text notes while a meeting is going on. A “Tap to Dictate” button allows you to create an audio recording on a presentation, and then get a text version of that recording in real time. 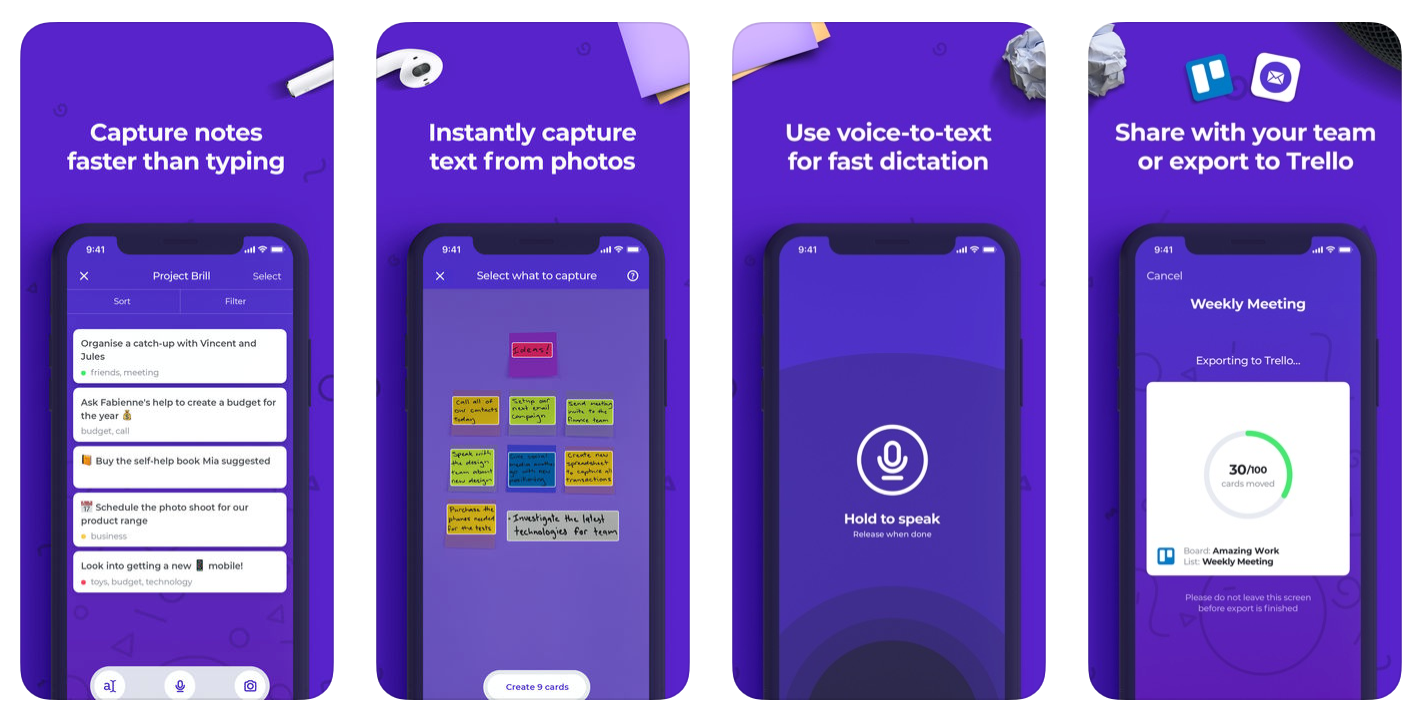 Again, it’s not going to be perfect, even less so if the person talking has a heavy accent or isn’t very close to your phone, but it is significantly better than nothing. You also have to press and hold down a microphone button for this to work, so it’s really meant more for short dictations than recording entire meetings.

If you’re looking for something to record an entire meeting I recommend Otter Voice Notes. I wrote about it a bit last year and use it regularly with interviews and other audio-heavy events. With it, you can record the entire thing and get a rough transcription in real time.

Like Brill, it’s not going to be perfect, but it is searchable. I regularly record hourlong events and then use the app’s search feature later to pull up the 15 minutes of that hour I actually want to listen to later on, because let’s face it, the last thing any of us want to do is relive a long meeting.