iOS/Android: There’s one part of being a reporter that I absolutely despise: Transcribing.

Whenever I interview folks, I always audio record the interview so I can go back and listen to it later. It’s a great idea in that I can talk to people like they’re actual humans without a laptop in my face, but a bad idea in the respect that afterwards, I have to relive that interview four words at a time, because that’s how many I can type while listening to a recording before I have to pause things so I can catch up.

Really, I record interviews because that’s what happens IRL as well, so I would never have any quotes if I relied on my own skills.

Now, an app called Otter Voice Notes is offering one way around the problem.

In recent years, a number of different services have come on the scene offering to use artificial intelligence to transcribe things for poor saps like me. I’ve tried them all with high hopes but have been pretty much disappointed, until giving Otter a test drive this week.

The app was created with the idea of using it in meetings. A creation of the company AISense, it uses AI to transcribe audio it hears it real time as well as identify different speakers and pull out keywords from a conversation. A beta version debuted in March, the company recently made it generally available and offered the option for users to buy a new Premium version.

I tried it out on a few interviews I did, and while it wasn’t perfect, it was much better than some of the other options I’ve tried out there. It’s also cheaper. My go-to before Otter was Trint, which is useful, but also costs $US15 ($20) per hour of recording. With Otter, you get 10 hours of transcription for free each month.

Like most transcription apps that use AI, it does a better job when the audio is recorded close to the microphone rather than further away, and when the speaker doesn’t have a heavy accent.

I tried transcribing Dr Martin Luther King’s “I Have a Dream” speech a few times using the same YouTube video, and when the phone was beside the speaker, the transcription was spot on. When I moved across the room, a bit less so. 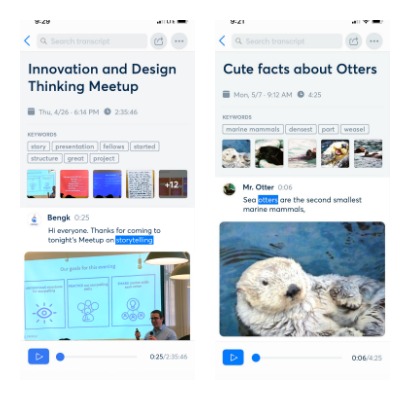 When you record something like an interview, it pulls out keywords and puts them at the top of the page; tap them and you can see where they occurred in the conversation. Likewise, you can also search for specific terms.

The idea is that if you record an entire meeting with it and later want to remember what was said about “The Jenkins project”, you can search for “Jenkins” and quickly find not only the big conversation about it mid-meeting, but also the shorter mention toward the end.

The app really works better for things such as meetings when you’re going to want to jump back to a specific reference point than it does reporter interviews where you’re looking for precise quotes, although it can handle both.

In addition to recording, the app also offers the ability to include images inline, so you can snap a pic of a whiteboard or slide and have it show up at the moment you took the picture in the transcription. It also offers text and audio export for sharing, and call recording as an Android exclusive.

Premium users (read: People who have a motherload of meetings they want to record) can get 6000 minutes of recording time a month rather than 600. There are also some advanced export options, including the ability to include or exclude speaker labels and timestamps in an export, as well as the ability to export in txt, pdf and vtt formats and mp3, m4a and wma files.

You can take it for a spin now by downloading the app from the App Store or Google Play. Pricing for the premium version is $US79.99 ($108) billed annually, or $US9.99 ($13) billed monthly. Students with a .edu email address can subscribe at a discounted price of $US2.99 ($4) per month.