How To Find And Hide Your NSFW Photos In iOS

iOS: If you’ve ever taken an R-rated picture on your phone, odds are good that you know it exists somewhere in your photo library. I’m pretty forgetful, but I know I’d remember that fact. I mean, there’s the setup process—lighting is important!—the fact that you have to at least partially undress, the multitude of photos you’ll take before you settle on the one perfect one, the knowledge that you’re probably sending this to someone (and might regret that fact later), etc.

Simply put, it’s hard to forget that you’ve taken a naked selfie. A nelfie? A thirst trap? Whatever you call it, it’s there, buried in your photo library for anyone with access to your device to unearth, accidentally or otherwise. That’s why I find the premise of Orga so interesting—it’s an app that promises to help you find questionable (NSFW) material on your device and, if need be, isolate it in a password-protected gallery.

When you start up Orga, you’ll see a big splash screen that tells you the app’s purpose: scanning through your photos to help you identify what’s in them (especially the NSFW stuff). You’ll then be asked to set a passcode — standard stuff — and you’ll eventually make it to a page that has a handy “Is my data safe?” link in the upper-right corner.

You’ll want to tap that and read through the FAQ carefully, but I’ve also included a screenshot below that shows how Orga answers the most burning question you probably have: 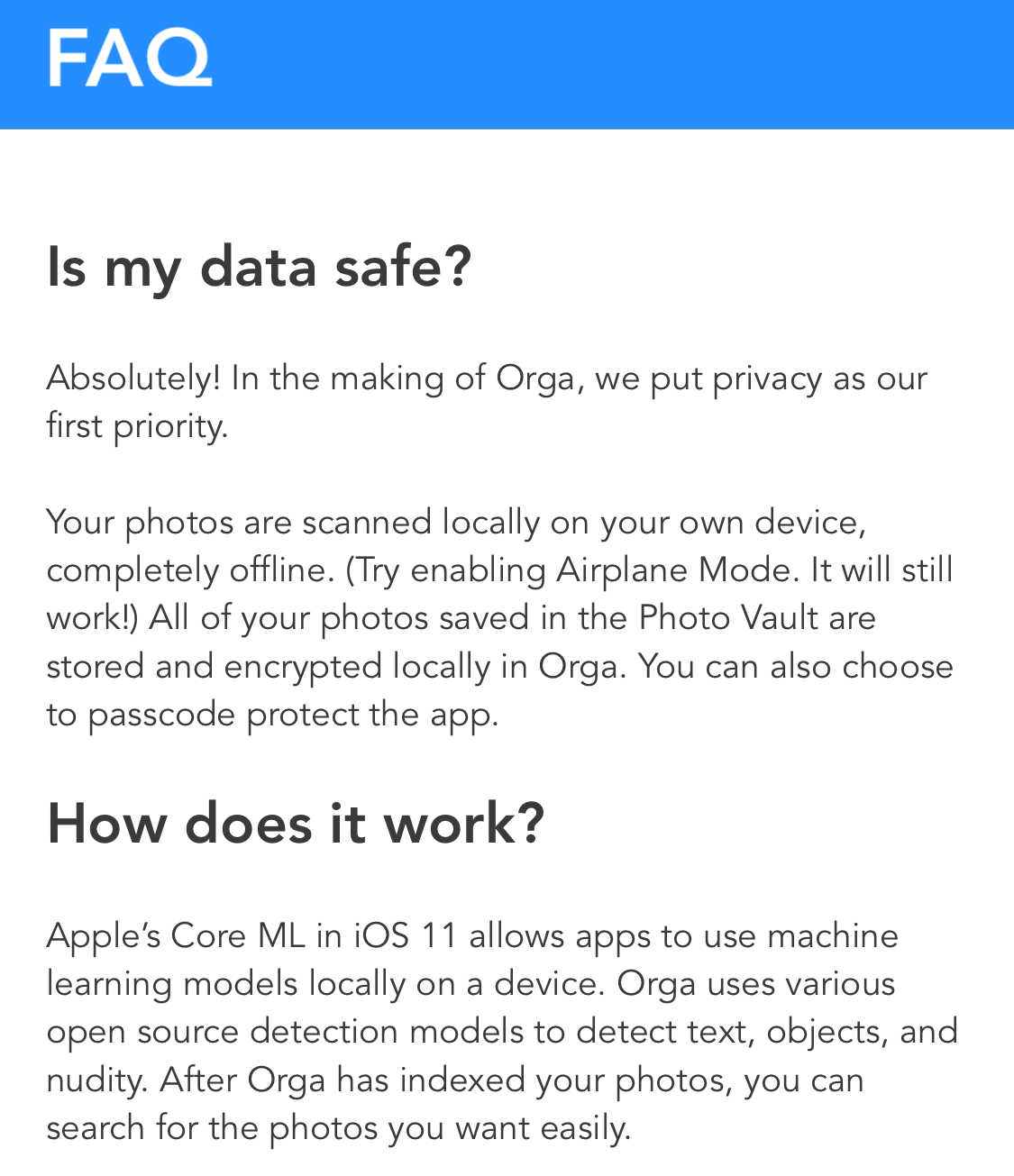 You should be suspicious about any kind of app that promises to do something with your photos, especially if the entire point of the app is to help you “find” and organise your risque ones. I don’t speak on behalf of Orga, nor do I have any special knowledge about how the app works under the hood, but it’s at least reassuring to know that Orga does work entirely offline.

In iOS, there’s no way to disable the app from accessing the internet via wifi or your cellular connection (unfortunately). You could always make a shortcut, though, to turn aeroplane mode on and then launch the app. This might sound annoying, but I suspect Orga is the kind of app you’ll use on an infrequent basis, rather than every day. (And don’t forget to force-close the app when you’re done, if you’re feeling nervous, and turn aeroplane mode off.)

Once you’ve made your choice to use the app, you tap on the big “Scanning Photo” button to do just that. You’ll leave the app open while it takes a peek through your photo library, and it’ll make note of the various items in your photos (including things like text and things that appear to be nudes). 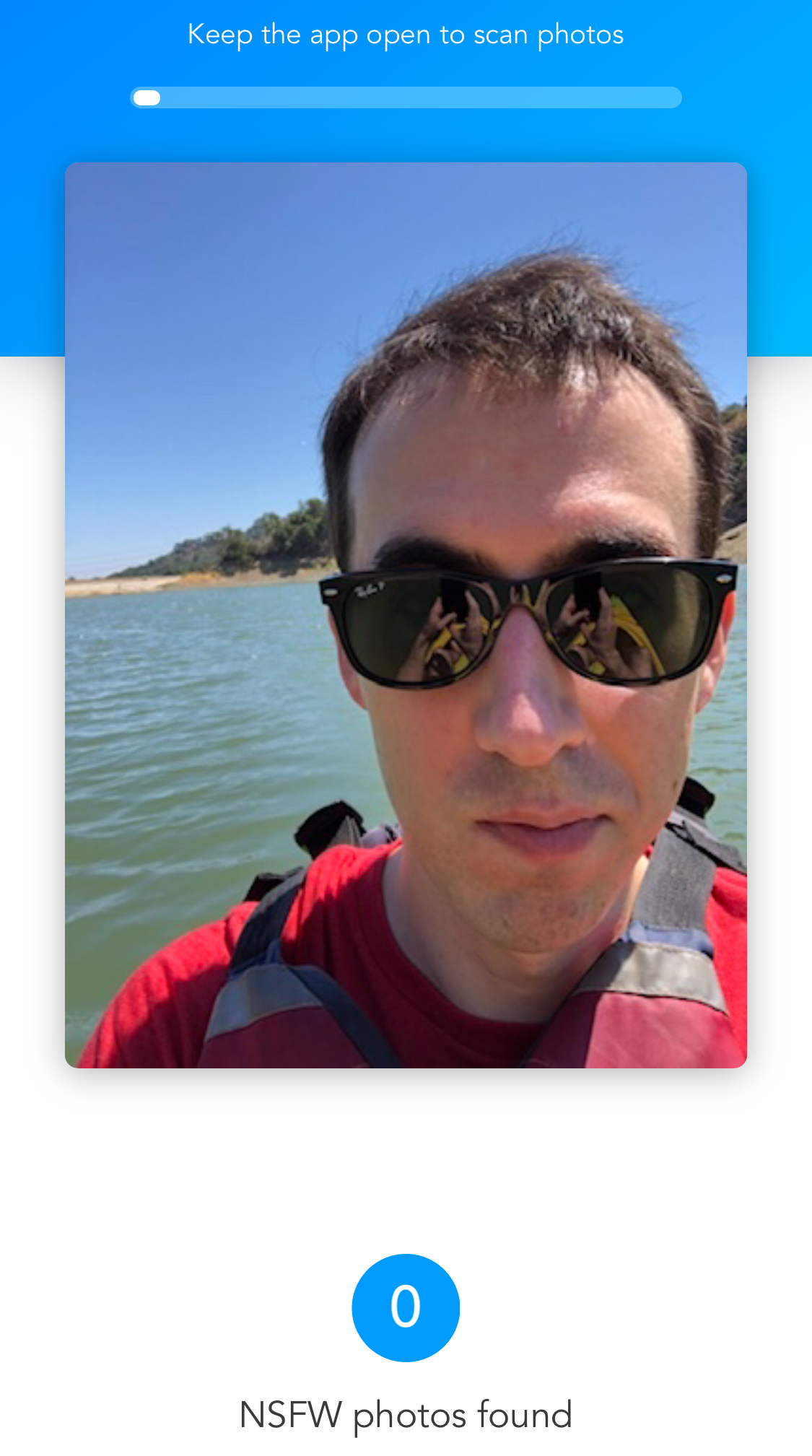 When it’s done, you can then search through your photo library for anything you want. While I found this feature to be more complicated (and less accurate) than, say, Google Photos, the app does a decent job of finding and displaying whatever it is you’re looking for. When you search for “nudity”, specifically, you even get a little slider bar you can use to adjust the app’s sensitivity. 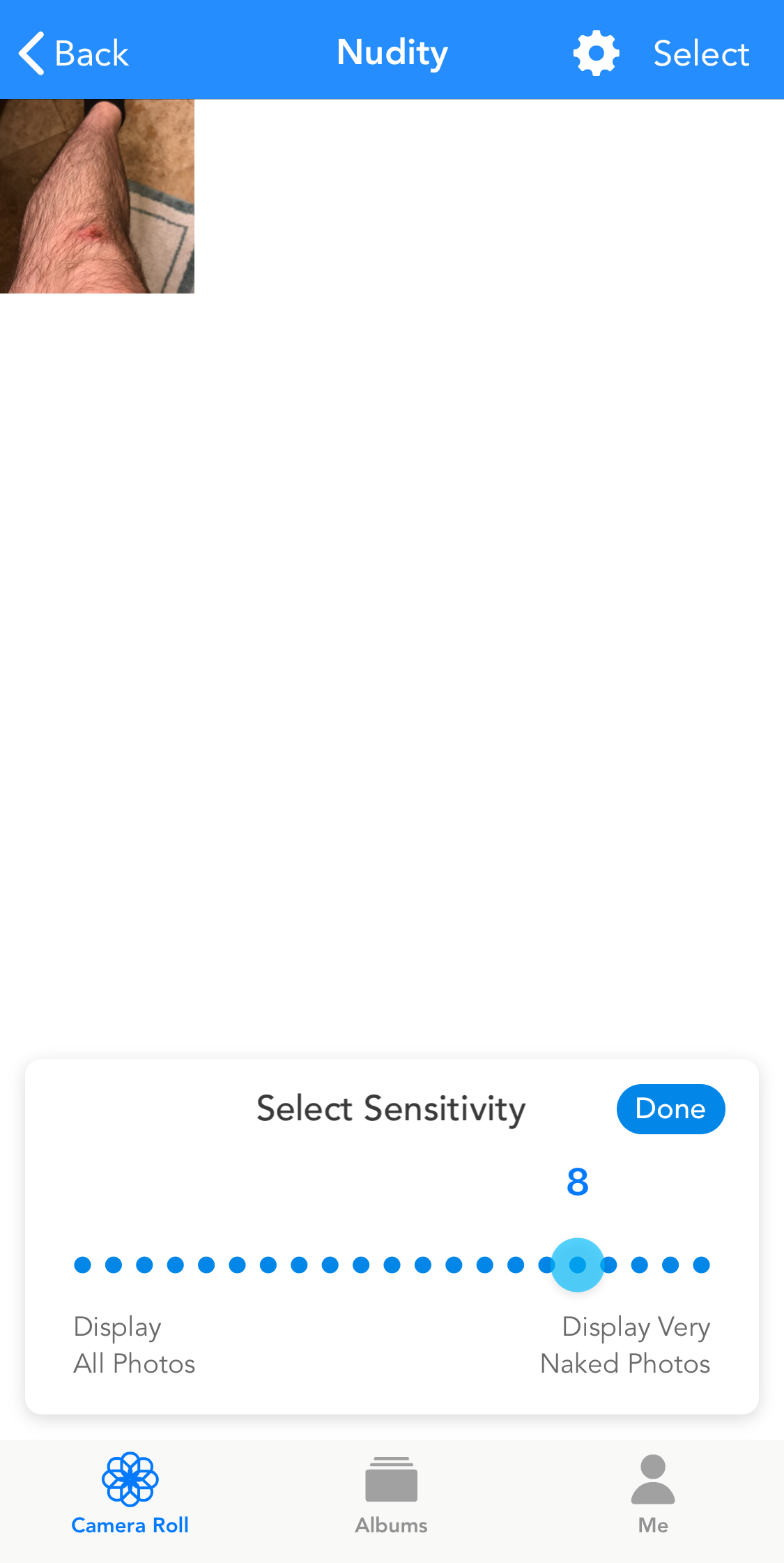 I guess that’s, er, nudity. I’m pretty sure I was wearing shorts at the time, but there you go. (Screenshot: David Murphy)

I was surprised, but not that surprised, that I don’t have anything scandalous on my device. (I don’t recall taking any nudes in all the time I’ve owned my iPhone, because my life is dull and devoid of purpose.) That said, I’ve definitely had some shirtless shots of me when I was on a vacation in the Caribbean, so I adjusted the slider to see if that would uncover anything. 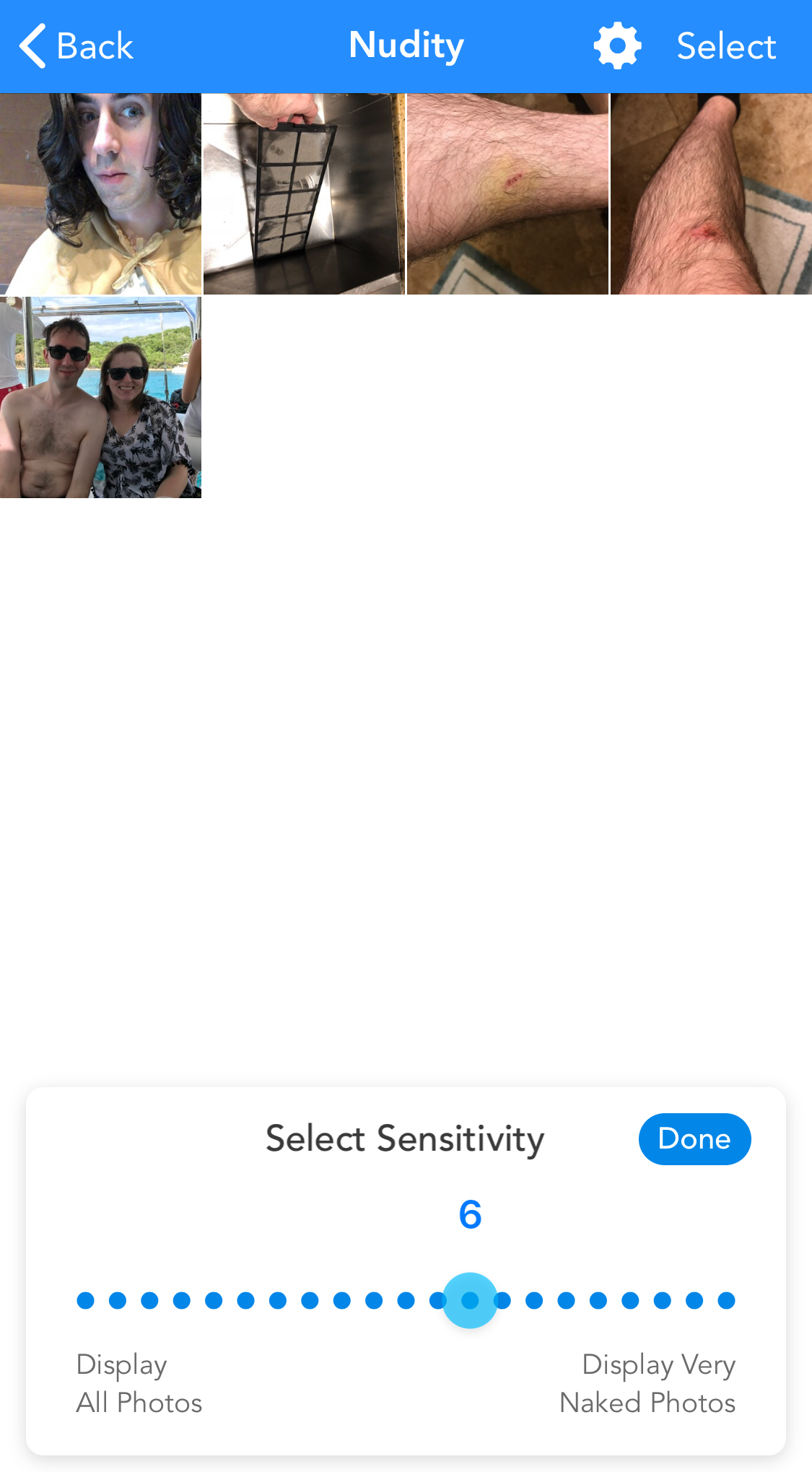 Well, there’s one photo from my vacation, at least. Also, me in a wig in a theatre show I was in, my gross scraped knee again, and… the dust filter for my PC. I’m not quite sure how that registers as “nudity”.

Since I am (apparently) so boring, I decided to shave a bunch of pictures of everyone’s favourite shirtless superhero, Jason Momoa, onto my iPhone and rescan my library using Orga. No dice; the app didn’t find a single one using a “nudity” search. Shirtless is the new never-nude?

Orga’s searching mechanism is a helpful guide, but not the most precise. However, the app’s other key feature — its Photo Vault — is certainly useful. Pull it up (via your PIN or Touch ID/Face ID, which you can toggle in the app’s settings), and you can rip photos out of your iOS photo library and stash them in your protected vault.

While you’ll lose the benefit of having these photos synchronised to your iCloud, an issue easily fixed by using a different app like Google Photos to back up these pics first, you’ll be able to give yourself a secondary safeguard against anyone who might be able to access your device.

For example, if a friend knows your iPhone’s PIN, they’d be able to get into your device and look around for whatever they want, but they’d still be blocked from seeing your collection of Orga-protected NSFW selfies unless they knew your secondary PIN (or had your finger or face handy). Obviously, your friend wouldn’t need to be a super-spy to figure out that they can also find your parts in Google Photos, if you took my advice and used that to first back up your NSFW photos first, but maybe you can bury that app in a miscellaneous folder somewhere. (Maybe they’re not smart enough to realise Google Photos even exists.)

This all seems like a little overkill, sure, but one can never be too careful about one’s private pictures. While Orga might not be one of the greatest tools to find them, it’s pretty solid for saving and securing them.