politicsprivacysocial mediasocial networks
Facebook may have decided that you shouldn’t see the news, but we think you deserve to be in the know with Lifehacker Australia’s content. To sign up for our daily newsletter covering the latest news, hacks and reviews, head HERE. For a running feed of all our stories, follow us on Twitter HERE. Or you can bookmark the Lifehacker Australia homepage to visit whenever you need a fix.

We hear a lot about the problem of Facebook ads—whether it’s about user information being tracked for targeted ads, or fishy groups using ads to spread misinformation. Just look at the effects on our political landscape: we have voters and politicians who spout false information, often just because they saw it on social media.

Facebook ads are particularly egregious since the website collects personal data and tailors the ads you see based on your browsing behaviours. That leads to not only creepily specific targeted ads, but also a greater chance for those who don’t fact-check properly to be duped by ads containing false or misleading information.

To combat this, most people boost their privacy settings, or leave Facebook entirely. If you’re not ready to dump Facebook but you’re also not in the mood to be lied to, there’s another alternative: you can now get information on every entity that’s advertising or promoting content on Facebook.

Search results include any ads whose organisation, page, or description match the search keywords, and users can filter based on country, for active and inactive ads, and ads run on related pages. By clicking on an ad’s info, you can see who paid for the ad, how many times it was viewed, how long it ran, and other metrics.

Facebook also puts together a publicly available, downloadable weekly ad report that details what ads were run on the platform that week, who paid for the ads, and the total spent.

According to these reports, over 3 million political ads ran on Facebook between May 2018 and April 20, 2019, which cost advertisers over $775 million. The long list of advertisers is largely unsurprising, such as the group Beto for Texas, or the Trump Make America Great Again Committee, followed by a long list of other political campaigns, special interest groups, and lobbyists. This transparency makes it easy to see who’s paying to spread their information on Facebook, and just how many users are seeing it.

There are some odd inclusions, however. Because the database contains any and all politics-related ads, even those without an inherently political message, such as those from news organisations and politically unaffiliated pages, get added.

Because of this, some unexpected names appear on the list of Facebook’s political advertisers, like Cyndi Lauper, who advertised T-shirts made in solidarity with the Time’s Up Movement, and ads for Funny or Die’s content, which often spoofs and satirises real-world events.

The database even counts ads from Microsoft or Stella Artois highlighting pollution and access to drinking water: 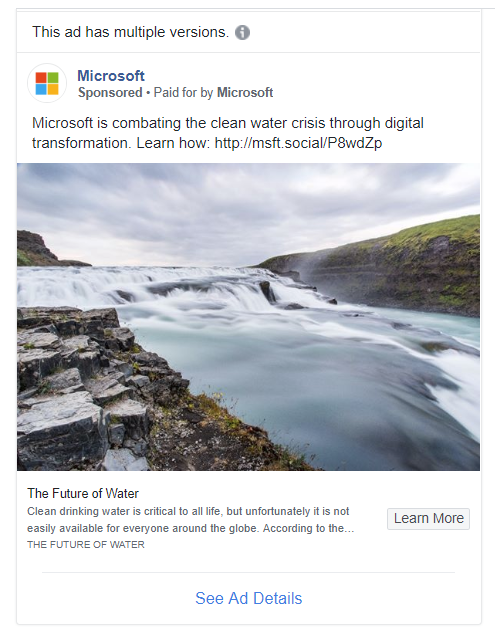 I wish we didn’t live in a world where wanting clean drinking water and healthy marine habitats is considered political, but the transparency is important nonetheless. 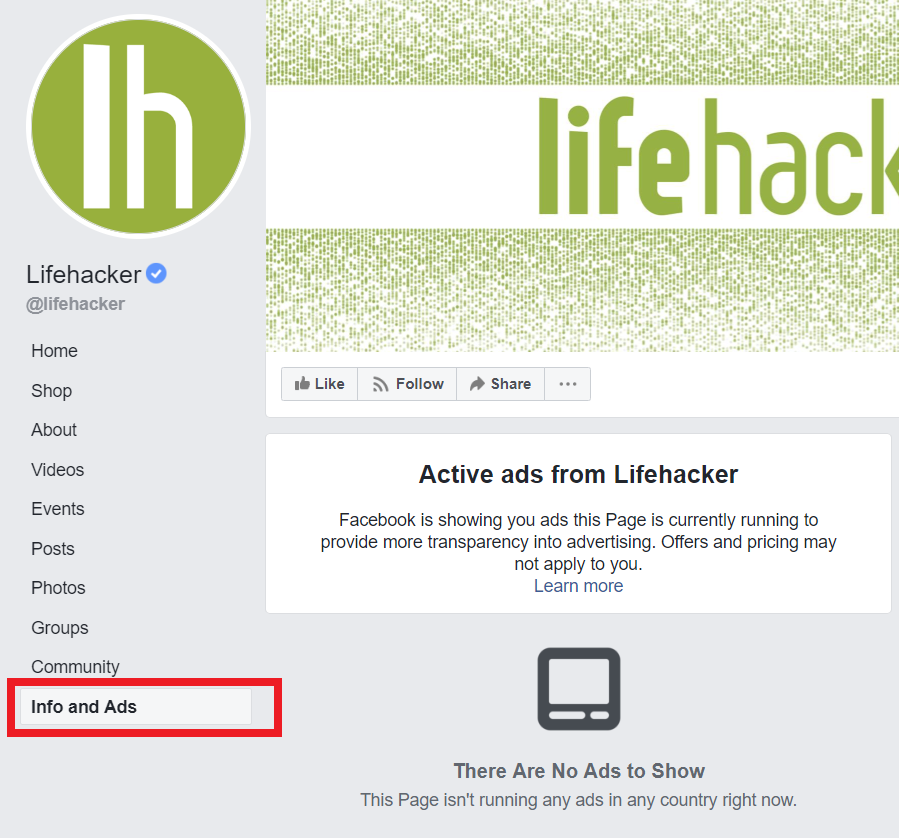 With a few clicks, users can see any currently active ads from any page. On any public Facebook page, click the “Info and Ads” option at the bottom of the left side menu of the page. This will open a new page that displays any active ads the page has running on Facebook, Instagram, and/or Facebook Messenger (whether those ads are directed at you or not).

You’ll also find links to ads run by related pages, and if the page has run political ads—and if it has, it’ll link to the ad library, above.