Why You Should Pre-Smash Your Burgers

It’s no secret why burger chains like Grilled, BL Burgers, and Lord Of The Fries are having such a moment. Their thin, moderately-sized burger patties show a deep and abiding understanding of what makes a good cheeseburger: a reasonable portion size, seamless integration with the bun and toppings, and of course lots and lots of salty, crispy, cracklin’ burger crust.

I’m not saying that thick, pub-style burgers with minimum crust and maximum unseasoned cow mush don’t have their place; it’s just that their place is some lonely (but charming) watering hole in Great Britain with a pint of too-warm beer.

Burgers have gotten out of hand. Not only are bistro pubs and hip bars topping them with everything from avocado to pork belly (both of which detract and distract), but the patties themselves are just too darn thick. A burger is not a steak; a burger is a sandwich, and a sandwich is about balance between all the fillings.

To achieve similar nirvana at home, we’re told to take our cues from the experts and smash pucks of ground beef directly into a hot pan with a spatula before scraping, flipping and cheesing, just like the pros at your favourite Fast Casual Hamburger Restaurant Concept.

You’ll get a great crust and maximum flavour, plus, smashing things is fun! Oh, you should smash your burgers alright. In fact you should smash them as thin as they’ll reasonably go. But you should do it before they ever touch the pan. Not after. I’ll explain.

Before you baulk, have you actually tried smashing a burger on the stove? Because I have, countless times, and it’s a kind of annoying endeavour. It’s a problem of both logistics and ergonomics. Realistically, most people don’t have an industrial spatula that’s wide enough to get full coverage on a smashed burger.

In practice, as you press down in the middle, the edges eventually escape the spatula’s wrath, ending up thicker than the beef in the centre.

This is no crime, but if we want maximum crust, thicker sections of beef mean surface area left on the table. Getting the right leverage is no picnic, either. Squishing defenceless ground beef is by no means a Herculean endeavour, but I’m five feet, 9 inches tall, strong in both body and spirit, and I still have a hard time feeling like I’m really getting “on top” of the beef to flatten it.

Besides all that, once you get it smashed, more often than not the beef patty is more interested in sticking to the spatula than to the pan itself. And that, friends, is the real issue.

Though he didn’t invent the technique, Serious Eats’ J. Kenji Lopez-Alt is the one who brought it to my attention. After trying and failing to replicate his Ultra-Smashed Cheeseburgers, I figured I’d reach out over Twitter to see where I went wrong.

You can’t pre-smash and you can’t use a nonstick or oiled or even well seasoned griddle. Smashed burgers only keep their size because they stick to the surface while cooking and that keeps them stretched out.

The important part is not the admonishment to not pre-smash – which I probably should have thought twice about before including it in a long blog about pre-smashing! – the important part is this: “Smashed burgers only keep their size because they stick to the surface while cooking and that keeps them stretched out.”

Not my lovingly seasoned cast iron pans, and not my large adult carbon steel griddle son. Smash early, smash late, or smash not at all, the metal is just too well-seasoned for the burger to stick. If that’s the case, we might as well smash early to maximise the surface area while we can.

(Yes, I also own stainless steel cookware. If you want to navigate the sides of a skillet with a spatula to scrape up a burger without losing any crust or irreparably burning burger grease into your beautiful tri-ply pans, be my guest. But also: a cold, pre-flattened patty will stick just fine to a hot, unoiled steel pan, I promise.)

Pre-smashing, on the other hand, offers some advantages. For starters, you can do all your burgers ahead of time, streamlining the actual cooking process. I like to ball each burger up, sandwich it between two pieces of plastic wrap or wax paper, and press very firmly with a heavy 10 inch skillet.

Done with four ounces of beef, the result will be very wide (much wider than the palm of your hand), and about a quarter of an inch thick. Leave them stuck to the bottom piece (replacing for each one), and you have an easy way to slap a bunch of burgers down on a pan or griddle in short order. 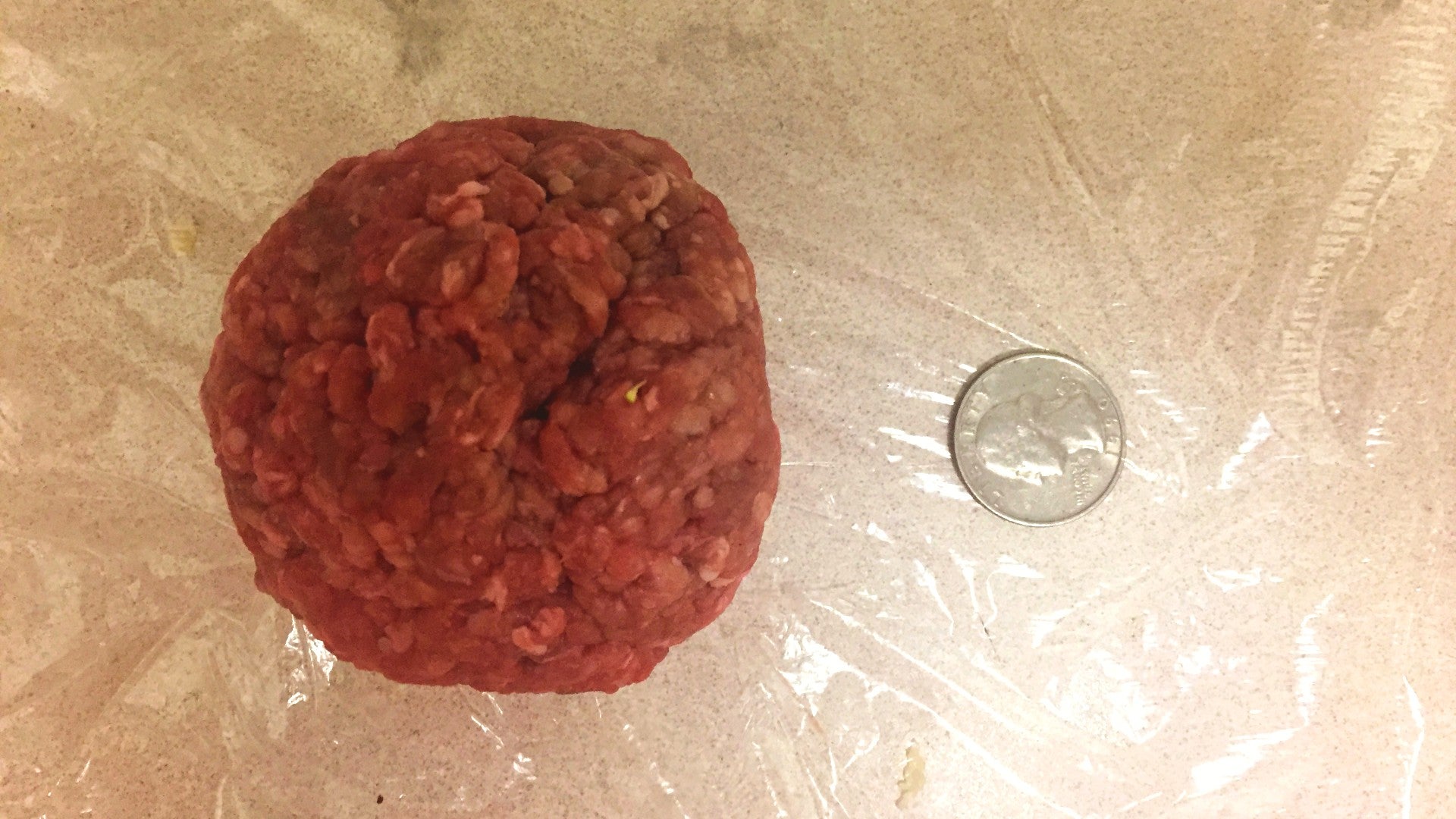 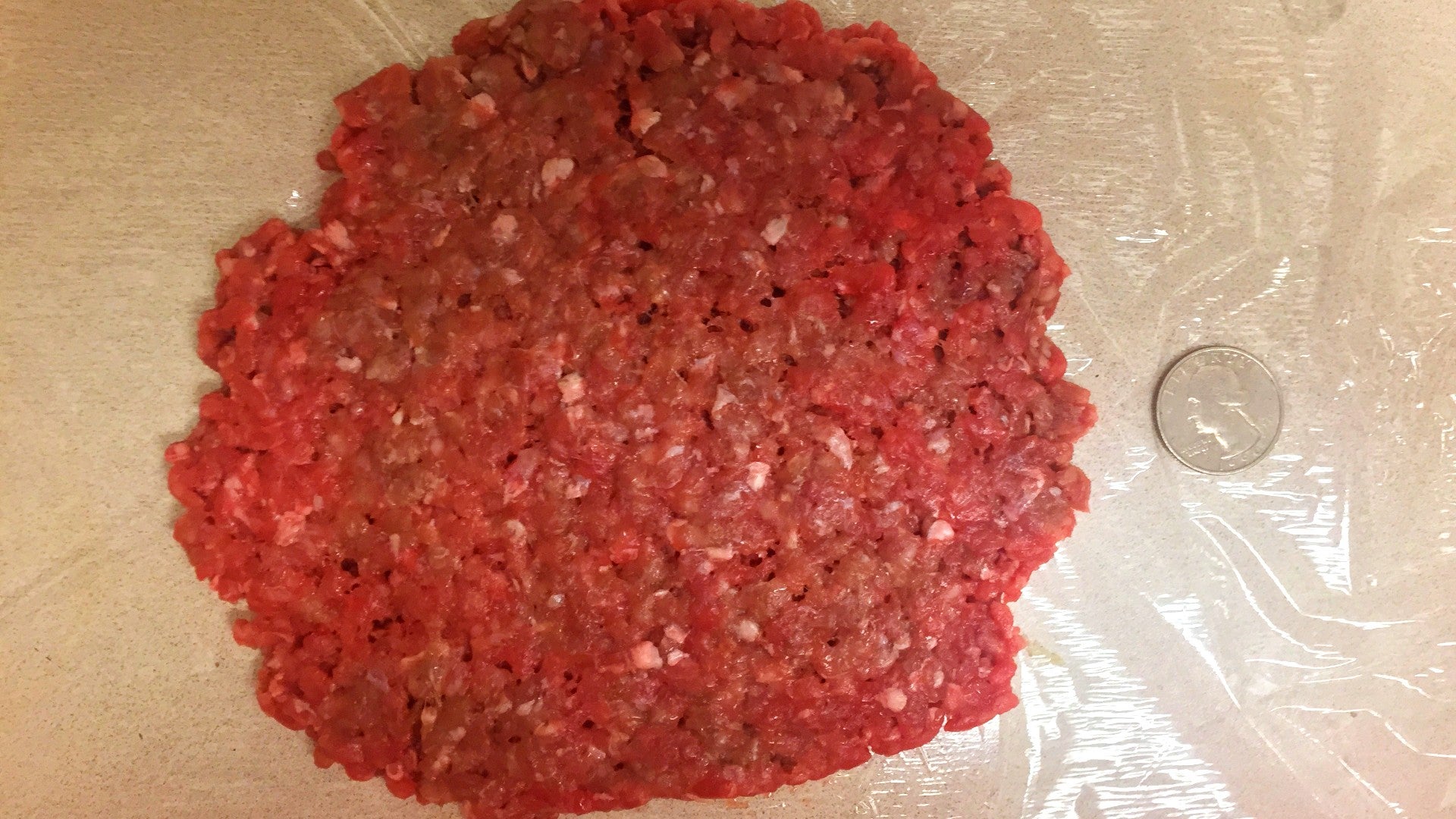 Four ounces of beef, smashed as much as reasonably possible (Photo: Ian Lang)

The other advantage is size. It’s a fact of life that no burger will end up as large as it began, especially without the benefit of smashing them onto a dry, sticky, Miraclean griddle. Fat and fluid loss and protein linkage are inevitable, so I want to get the most crust I can before things get shrinky.

Moreover, I want my burgers to have a pleasing final size, at least as wide as the bun they sit on. I know that if I pre-smash four ounces of beef to maximum (reasonable) thinness, I will end up with a finished product that’s conveniently precisely as big as a standard slice of American cheese. Can you say the same for your haphazardly eyeballed hand-formed patties, or the ones you hurriedly smashed in the pan?

If you’re making burgers larger than, say, 150 grams, I certainly wouldn’t recommend smashing them to maximum thinness, because you’d get a patty the size of a dinner plate.

But I would still smash them out pretty wide, a lot wider than you want the finished product to be. And if you want to eat a whole bunch of cow, why not make multiple smaller patties? More crust, more cheese, more joy. 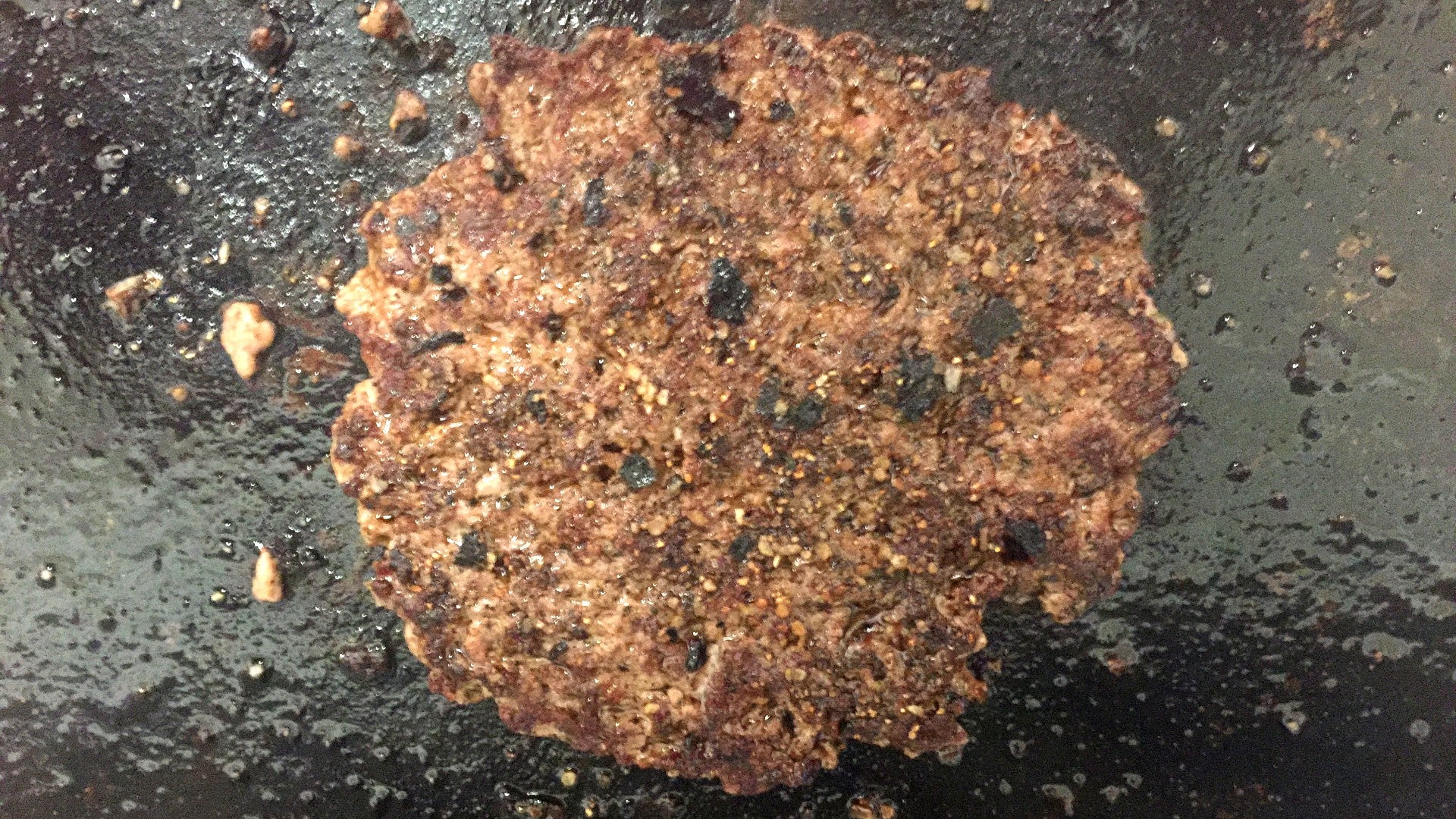 I’m not seeing any missing crust here, but maybe my eyes are starting to go. (Image: Ian Lang)

To recap: For pan smashing to have any advantages, you need a pan that meat will stick to—and if you’re using cast iron, carbon steel, or (heaven forbid) nonstick cookware, that’s not gonna happen. And if you do choose a sticky surface (stainless steel or unseasoned cast iron), you’re almost certain to lose some of the crust without the proper tools.

Why not pre-smash, get just as good a crust, plan for the inevitable shrinkage, and actually enjoy cooking and eating your burgers?

Look: Burger culture, evident in the fact that it exists at all, is second maybe only to pizza culture in its annoying nerdy pedantry. It’s odd — but maybe not surprising? — for people to form such strong opinions about simple foodstuffs so central to the Australian culinary experience.

So don’t take this as gospel, but rather one more suggestion in the discourse: pre-smash your burgers, and pre-smash ‘em real good.

Preheat a skillet, griddle or grill to medium-high heat. Gently roll burger meat into four equal balls, and place one ball between two sheets of plastic wrap or wax paper. Centre a heavy skillet over the ball, and press down with very firm, even pressure.

The resulting patty should be 6-to-7 inches in diameter, and about a quarter of an inch thick. Set aside, leaving the bottom sheet of paper or plastic stuck to the patty. Repeat with remaining beef. Toast buns (if desired), and prepare toppings and condiments.

Immediately before cooking, generously cover exposed burger surfaces with salt and pepper. Using your free hand to hold back excess plastic or paper, lay down as many burgers as your vessel will comfortably accommodate (the burgers should stick just enough to any surface to allow you to pull your hand and the paper or plastic away easily).

Let burgers cook for one minute to develop a crust before salting and peppering the uncooked side.

Flip, and cook 30-45 seconds. Flip one more time, immediately adding cheese. As soon as it softens, remove burgers to either a resting plate or their awaiting buns. Enjoy with friends, beer and a fair bit of sanctimony.