What to Do If Someone Starts an Online Rumour About You

Why Your iPhone Takes So Long to Install Updates Automatically

Are These Tangle-Free USB Cables Worth It?

How to Actually Brown Your Impossible Burger

Tech meats won’t save the world, but they do give vegans, vegetarians, and people like my father (who avoids red meat for health reasons) access to the simple pleasure of eating a burger. Impossible meat is a truly uncanny product that’s particularly hard to detect as “fake” if cooked and seasoned properly (and covered with all the usual burger accoutrement).

I’m not shy about the fact that I prefer thin, well-browned smash burgers to thicker steak-ish burgers. Ground beef isn’t always the most flavorful — as it’s usually made from cheaper cuts — and smashing develops flavour by upping the browned to not browned meat ratio in favour of the browned.

Impossible meat (and other tech meats) also benefit from such a ratio, as they are pretty bland on their own. As in any instance when you’re trying to get something to read as a little meatier, monosodium glutamate is a huge help here. Couple that with a proper smashing, and you’ve got a very convincing fake meat burger.

The problem, however, is that Impossible meat and its plant-based brethren are sticky — much stickier than ground beef. Smashing the burger in the pan forms a crust, but that crust fuses to the pan, even with a liberal coating of vegetable oil. Luckily, there is an easy solution: Pre-smash the burgs.

Pre-smashing — which we have discussed before — gives you a large amount of surface area, without as much stickage. In beef burgers, pre-smashing can lead to shrinkage, but that does not happen with meat-free burgers, thanks to their extra stickiness. 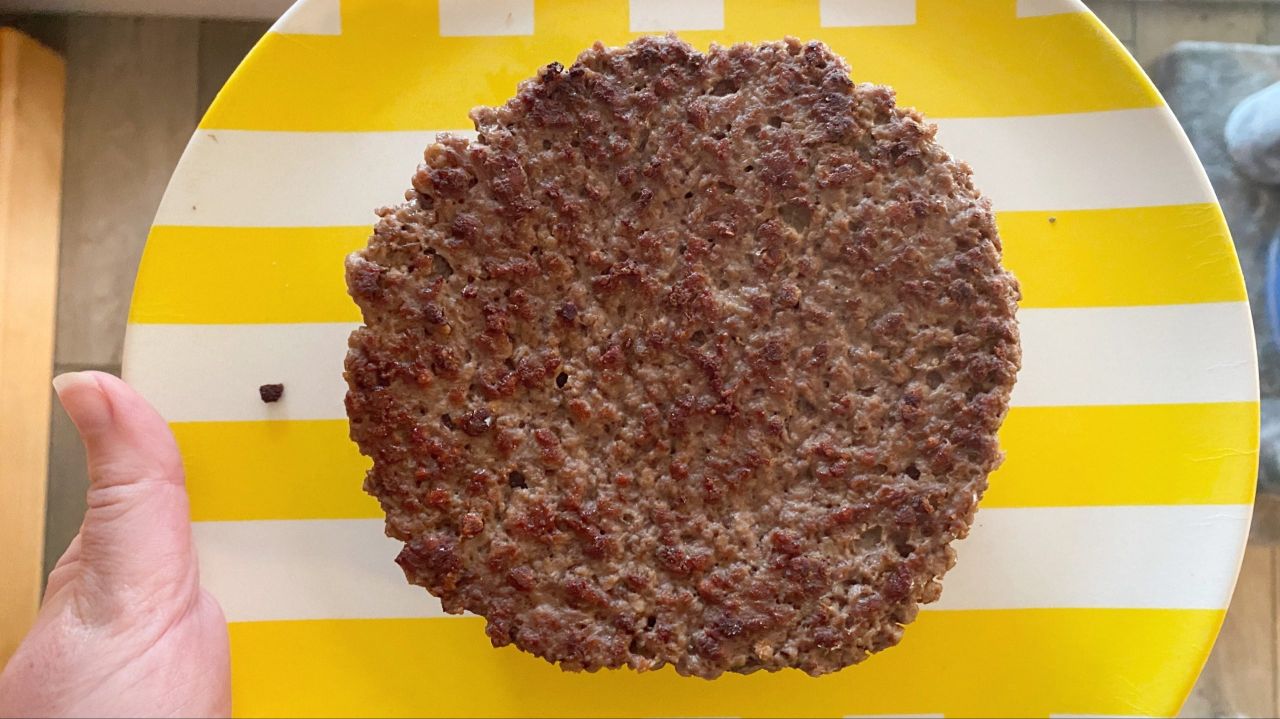 This can result in some sufficiently large burgers, especially when you consider that fake meat is usually less dense than real meat — 100g of Impossible burger is not equal to 100g of beef burger, in terms of volume. (Impossible burgers also seem to retain more of their moisture and fat during cooking.) You have two options: Enjoy comically large burgers, or decrease your starting material by an ounce. Either way, a little pre-smashing will help create the most convincing fake burger around.

Heat a stainless steel pan (or well-seasoned cast iron) over medium-high heat (lean more towards the “high” than “medium” side). While the pan is heating, smash 100g balls of raw Impossible “beef” between two sheets of parchment or wax paper to create 1/4-inch thick patties. Season the top of each patty with half the salt and MSG.

Once the pan is properly heated (a drop of water should ball up and dance around the pan), flip the seasoned side of the burger into the pan — do not press — and season the newly exposed side with the remainder of the salt and MSG. Let cook for at least 3 minutes, until you see the edge of the burger start to brown. Flip and repeat. (A fish spatula works best.) If you want even more browning, flip it again and let it cook for another 30 seconds. Once your burg is as browned as you want it, transfer to a bun and pile on the toppings. (Oh, and if you’re looking for a good vegan American-style melter, get the Field Roast Chao Slices. They’re incredible.)