How To Reject Someone On Social Media

I have to deal with so much stupid on social media, it makes me want to quit nearly every site I’m on at least once a week. Surely you’ve had this feeling as well — perhaps it’s because of an annoying friend, a trend that refuses to die, or some political discourse packed with racism and idiocy.

While you’re as unlikely to quit your favourite sites as I am, there are plenty of ways you can plant your flag in the digital ground and say, “enough is enough”, even if you don’t actually tell another person how reprehensible, offensive, or sad their conduct is.

If your patience is thin, simply severing all digital ties with people who annoy you is usually all you need to do. But if you don’t like swinging the banhammer at a first offence, most sites give you different ways to escalate your rage.

Rage Level Zero: Ignore it and move on

This is both the easiest and hardest thing you can do when you see something online that really gnaws at you. I find it funny that I can generally ignore or tune out peoples’ shitty comments and terrible personalities in real life, but find it much more difficult to silence my need to tell them how stupid they are when they pop up on my Twitter or Facebook feeds.

If you’re the kind of person who can’t resist a sassy retort, you’re going to have to spend some time training yourself to let it go. Elsa can do it; so can you. Scroll past posts or comments that irritate you. Don’t click through to a person’s profile to get yourself worked up over all the other terrible things they think. Don’t immediately message that one friend you talk to all the time about things that piss you off and add this latest offence to the conversational queue. Just move on.

If it’s any consolation, the concept of “not responding to things that make you mad” is a lot easier to master than “resisting the urge to get the last word in when you’re in the middle of an internet fight,” so there’s that.

You bit the bullet and are now engaging with someone who has irritated you with some stupid thing they said. That’s fine. Instead of starting out your retort by reminding your friend about the chorus from that one CeeLo song, try reaching out like a human being. This will be considerably more difficult based on comment poster’s perceived level of stupidity, but taking the upper hand — or reaching out with a thoughtful counterpoint instead of an all-caps blast — might allow you to both have a meaningful conversation.

That said, there’s no guarantee that your counterpart will ever see your point of view. They’ll probably double-down on whatever it is that has made you upset, but that’s OK. Stay on the high road, and you’ll probably be able to (eventually) walk away from the conversation without getting (too) pissed off.

Which reminds me. One of the most important parts of rational discourse is knowing when to leave. Say your piece, and if it feels like you’re talking to a brick wall, bow out. You can’t win every disagreement, nor should you try to.

Rage Level Two: Remove the annoyance, but not completely

If someone’s content (or the frequency of their posts) is always giving you stress, and you’ve either chatted with them (like an adult) or don’t even want to waste your time with a conversation, you don’t have to nuke them out of your online life completely. If they’re pretty eagle-eyed, they’ll notice the change in your relationship, and that’ll make for an even more awkward conversation later. Trust me.

Instead, your favourite social service probably has some tool you can use to remove the offending person’s contributions to the world from your feed, like Twitter’s muting, Instagram’s muting, Facebook’s snoozing (or unfollowing), et cetera. You’ll be able to maintain your connection with the person, and still see what they do as their “friend,” but you won’t have to actually view their updates unless you’re initiating.

Addendum: Get specific with your muting

If a service gives you the option to mute or unmute a person, that’s typically it — an on/off switch. However, if you’re lucky, your platform will let you customise your muting based on how irritated you are.

Facebook is the first (and only) example that comes to mind, but it’s probably the place where you’ll most make use of these features. As always, you’ll get different options depending on whether you’re interacting with Facebook via a desktop/laptop browser or your mobile app.

On the desktop, clicking into a person’s profile page will give you the classic “Friends” and “Following” boxes toward the bottom-right corner of their cover photos. While Facebook gives you lots of options to see more of them in your feed, you only really have two to remove them: unfollowing and unfriending.

Pull up your Facebook app on your smartphone or tablet and navigate to a person’s profile, and you’ll see the “Friends” and “Following” buttons once again. The “Following” button gives you the same “Unfollow” or “See First” options as the web-based version of Facebook. Tap “Friends,” however, and you’ll now see a “Take a Break” option. 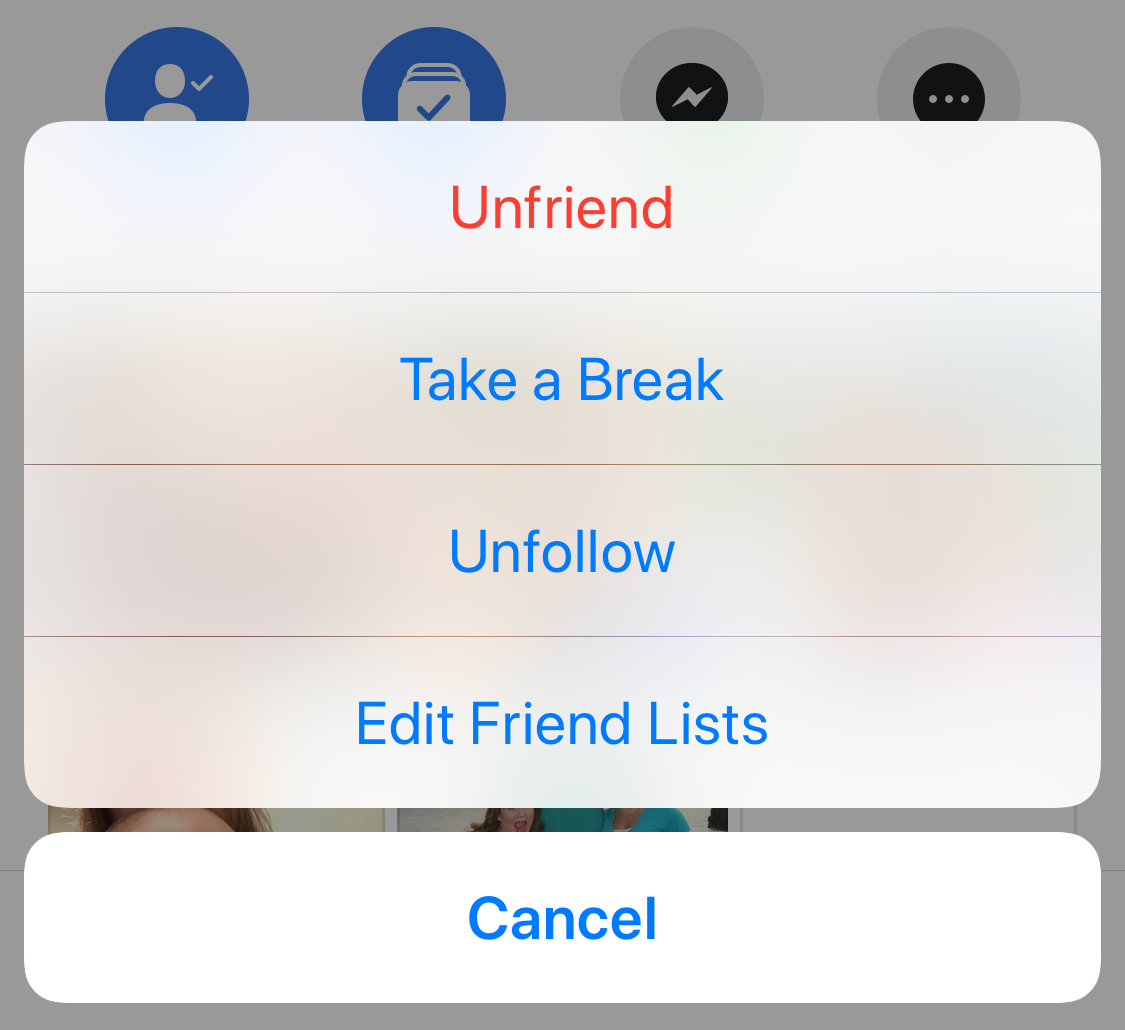 Tapping this pulls up a secondary screen where you can limit how much of a person you see on Facebook (which is different than unfollowing them), hide your posts from them (your “restricted” list), and change whether they can see your past posts (or whether you’re tagged in theirs, or any other post you’re both tagged in).

If you’re lucky, you also might have the ability to snooze other people on Facebook, which pulls them out of your news feed for 30 days. I’ve never seen this in my Facebook, so it’s possible that only a subset of users can do it (if the Facebook-promoted feature still exists).

Addendum: Maybe it’s the topic, not the person

It’s possible that you might not mind most of a person’s posts, but certain topics they bring up—say, politics—drive you crazy. Depending on the service, you might be able to remove any mention of subjects that trigger you, which could be a way to preserve your friendship with the people whose opinions on said subjects you find deplorable.

On Twitter, for example, you can mute specific keywords across your home timeline, as well as your mentions (from anyone, or just from people you don’t follow). You can also have this topical ban run indefinitely, or in one of three temporary increments: 24 hours, seven days, or 30 days.

While Facebook previously tested a similar feature, it doesn’t appear as if it made it past the company’s chopping block. You can, however, use a browser extension to hide posts featuring topics you don’t want to see. 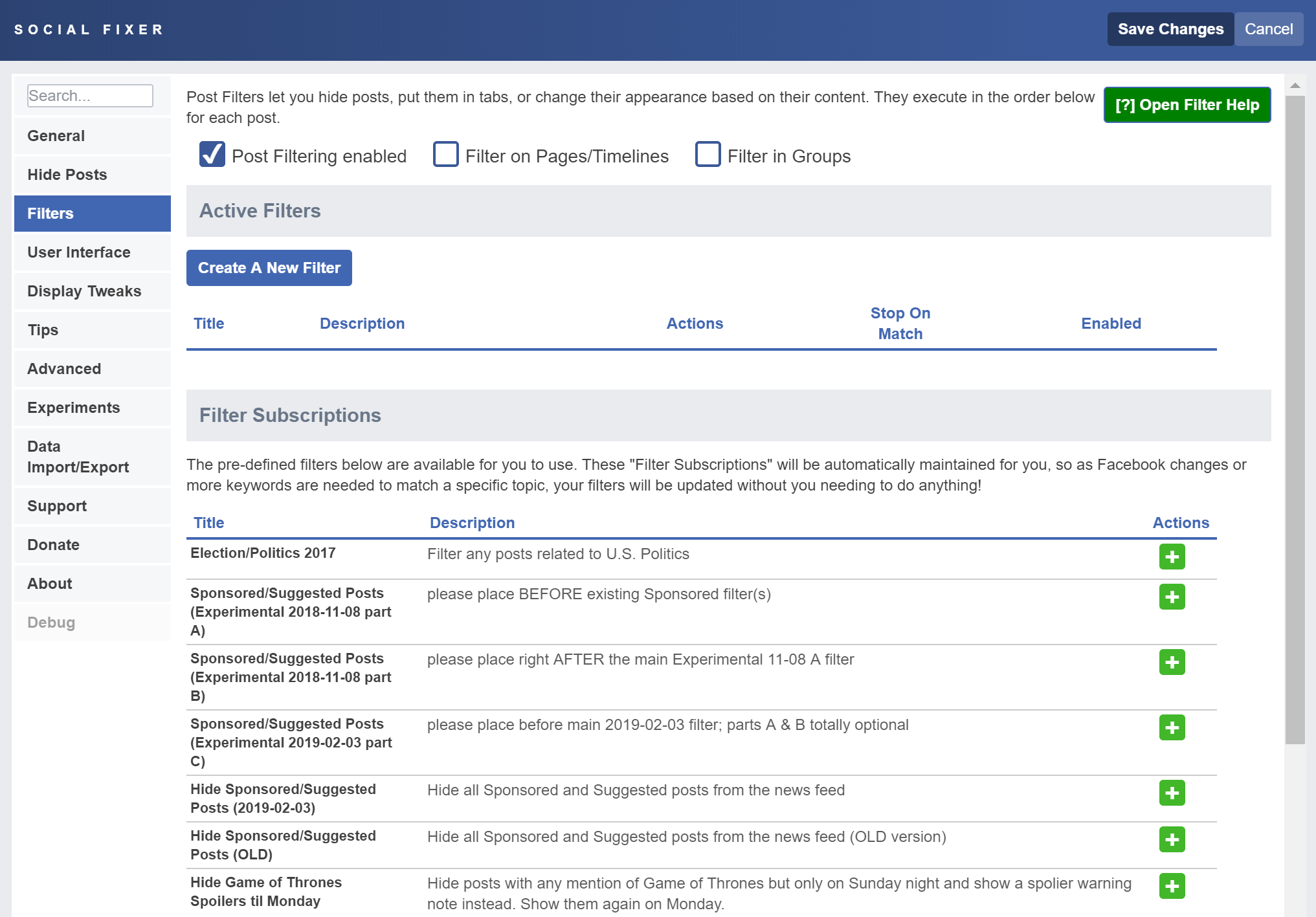 The same is true for YouTube: Try the extensions Video Blocker or BlockTube if you want to filter annoying YouTube comments (and videos) by keyword. If you’re on Twitch a lot, give BetterTTV a try.

Other general keyword-blocking extensions like Sadblock, Spoiled, Spoiler Protection 2.0, and, er, Trump Filter, might also be worth exploring.

You’ve done everything you can, but your anger at your cyber-buddy is just so great that nothing short of severing the connection will do. And that’s fine. You aren’t under any obligation to keep others—be they real-world friends, coworkers, or random internet people — in your digital life. If you’ve had enough, it’s time to remove them and move on.

You should be able to figure out how to extinguish a friendship on any of the regular social media platforms, since you probably request and approve connections all the time. However, deleting the connection isn’t the last, best trick in your digital toolbag for dealing with irritating people. If someone offends you so greatly that they cause to bypass all the other escalation steps in this article, you can always go for the nuke: the block.

If you’re trigger-happy — or you’re tired of dealing with arseholes all the time — blocking people on whatever social media sites you frequent is an easy way to make them out of sight, out of mind. On most services, this not only severs any connection you might have previously had with a person, but it makes both of you ghosts to one another. They shouldn’t be able to request any kind of connection with you and, ideally, you won’t be able to see each other’s content (or existence).

While I tend to reserve the almighty block for the greatest of annoyances, there are also some weeks when I have the overwhelming urge to use the simplest method to get someone to shut up, permanently. Don’t feel bad if you find your mouse cursor or finger hovering over the block button. It’s a powerful tool for making the worst online platforms slightly more bearable. And it feels great, too.