How To Make Starbucks Egg Bites

For reasons we can’t begin to fathom, the Australian arm of Starbucks does not sell its famous sous vide egg bites. These bad boys have a velvety, almost creamy interior, with — at least in the case of the bacon & gruyère variety — a distinct cheese flavour infused right in. Thankfully, it’s pretty easy to make them yourself.

The most important part of the egg bite is (obviously) the egg mixture. Yes, the fillings are more exciting, but they are also endless, and you should be free to fill your bites with whatever meats, cheeses and vegetables you wish to devour. As such, I though it was more important to focus on the eggs and dairy components and let you choose your own adventure, fillings-wise.

Scrumptious as they are, they’re not without their problems. The aforementioned scarcity is one, but another (much bigger) problem is that they cost four dollars and 65 damn cents for what amounts to (at most) two medium-sized eggs. Making them at home is definitely the more cost-effective way to go, but there’s yet another problem: they’re cooked sous-vide. (It’s right in the name!)

I know, I know. Cooking anything and everything sous-vide is mighty popular around here, and for good reason, but not everyone owns an immersion circulator, and it’s hard to get that perfect little orb without the commercial molds US Starbucks clearly has access to.

I briefly envisioned cutting up a silicone muffin tray and painstakingly vacuum-sealing each cup before winging it with a hacked beer cooler, but a quick check around the web for copycat recipes finds that they typically involve mason jars and long cook times in precise water baths (ahem). Turns out, you don’t need any of that stuff (minus the silicone muffin tray, left mercifully intact). Your oven will work just fine, provided you take a few simple steps to avoid the dense, rubbery fate that befalls most baked egg cups.

The ingredients list is the first hint that the cooking method probably has little to do with the final outcome. The first ingredient is cottage cheese, meaning each egg bite is at least as much cheese as it is egg. Given that, the way forward is clear: beat the eggs with a generous amount of cottage cheese, add a little salt to help the eggs retain moisture, and periodically agitate the eggs to help keep them homogenous.

I started with a heaping tablespoon of cottage cheese per egg, but that proved to be too much—they were moist and velvety, alright, but so moist and velvety that they collapsed even after cooking to full doneness. I settled on one fewer tablespoons of cheese than the number of eggs used (for four eggs, use three tablespoons of cottage cheese). Once you’ve measured out the eggs and cheese, get them into the bowl of a blender or food processor, along with a couple generous pinches of salt, and a few dashes of hot sauce, and whip away. (I don’t recommend doing this by hand unless you have something to prove, as it would be really hard to fully mix the eggs and cheese.)

Next, assemble. Put a little pinch of bacon (if using) into the bottom of each silicone muffin cup; you can roughly count on each egg filling one cup. (I used cheddar cheese instead of monterey jack/gruyere because that’s what I had, and I opted for some country ham instead of bacon because sometimes it do be like that, but I would recommend cooking and chopping your bacon first to avoid the wan, limp strips that come in the Starbucks version.) Fill the cups about ⅛ of an inch shy of the top with the egg mix, and finish with a little pinch of shredded cheese. Sock it into an oven set to 360℉, then step away for 10 minutes.

If that doesn’t seem like enough time for the bites to finish cooking, that’s because it’s not. What ruins most baked egg recipes is that the outsides cook faster than the insides, leading to that horrendous (albeit familiar) foam rubber texture. To avoid it, you’re going to kind of treat these like little omelets: let them set a bit, and then move the cooked bits aside so the uncooked egg goo can have its time in the heat. At the 10-minute mark, get in there with a paring or butter knife. Scrape the sides down, and mix things up so that everything looks evenly distributed. Back in the oven they go, this time setting the timer for five minutes. 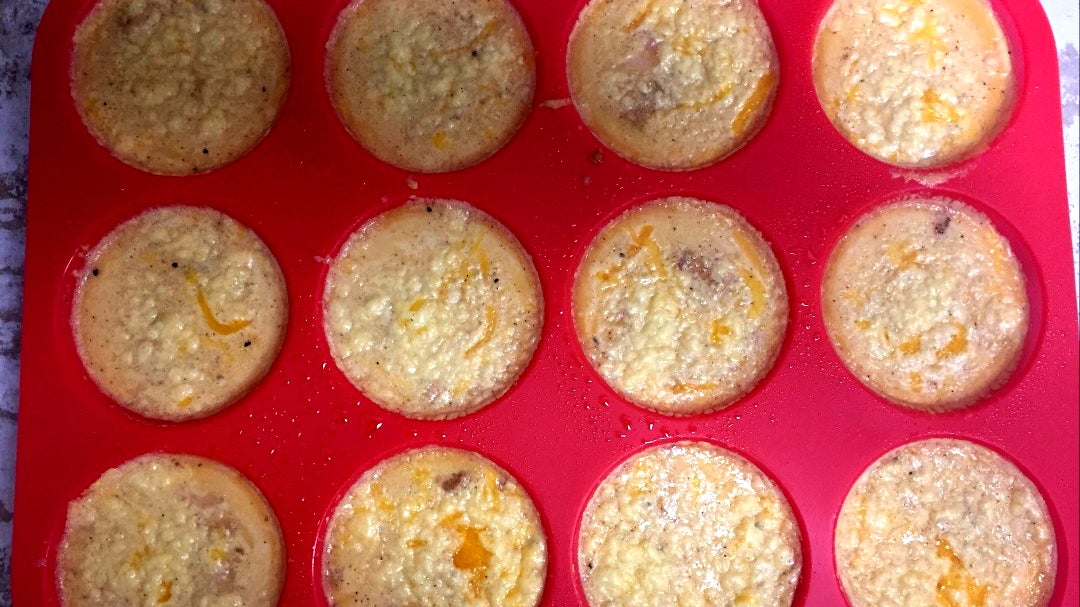 The 10-minute mark. Not exactly appealing, but we’re not done yet! (Photo: Ian Lang)

Odds are, a lot more has happened in the last 5 minutes than in the previous 10. You should see some decent-sized egg curds suspended in thick egg goo, which is what you want. Give the cups one last mixing with your implement of choice, taking care to once again scrape the bottoms and sides. Pop them back in the oven and set the timer for another five minutes.

This is the point where things get a teensy bit weird. After the final five minutes have elapsed, you should open your oven to find that the eggs on the edges (or at least, the corners) of the tray are set, and possibly even a little ballooned out of their cups. If you tried to cook a full dozen or so eggs, the ones in the interior of the pan just won’t cook as quickly. This is the fault of physics, and there’s nothing we can do about it.

That’s OK! Pop the cooked ones out, and turn your attention to the late bloomers. Resist the urge to fully mix them again (like with an omelet, agitating too much too late will break it into scrambled eggs), but do poke and scrape around the top, as a skin has likely formed. Expose the remaining egg goo, and pop them back in for two or three minutes. Unfortunately, the eggs in the dead center of the pan will take the longest to cook, so you’ll need to check on them often. Once you’ve popped the last of them out of their little cups, you’re done. Let them cool for a minute, and then bisect one and marvel at its velvety texture and canary yellow homogeneity. 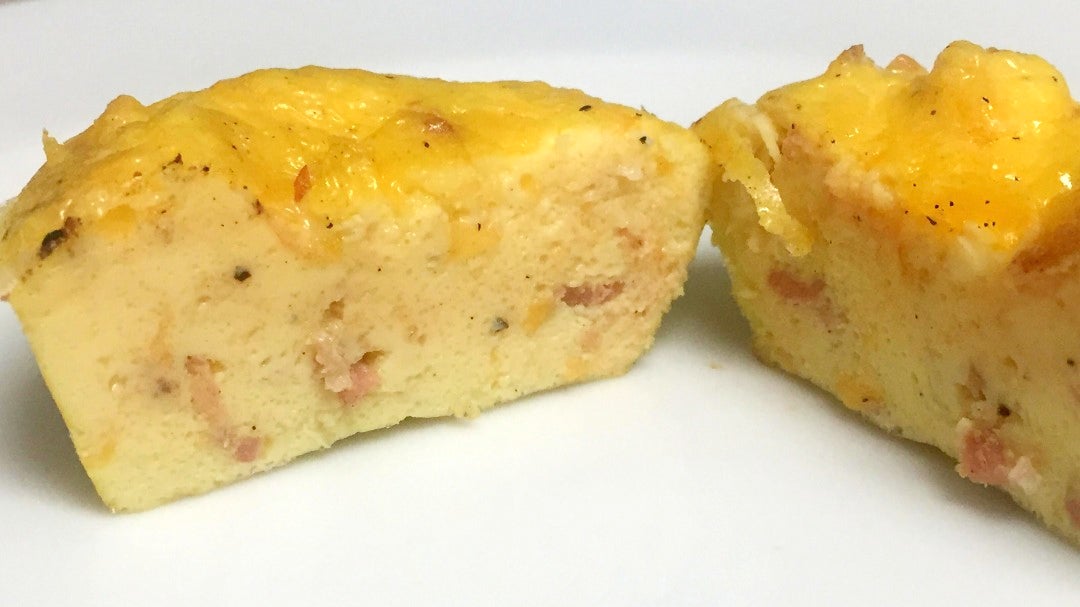 If you made a bunch for meal prep purposes, I find these freeze well if you let them come to room temp before refrigerating them, and then let them come to fridge temp before freezing. But even if you’re just whipping up a few servings for yourself, friends or family, you have the satisfaction of knowing that you delivered a superior product in less time than it takes to drive to Starbucks and back, and without the fancy sous-vide machine. (And without paying over two dollars per friggin egg, which can’t be brought up often enough.)

Beat eggs, cottage cheese, salt, 2-5 dashes of hot sauce and pepper (if using) in the bowl of a blender or food processor until fully mixed. Divide bacon across 8 cups of a silicone muffin tray set in a sheet pan. Pour egg mixture into cups and top with shredded cheese.

Remove pan and extract any egg bites that are fully set on top and beginning to rise out of their cups. For those that aren’t, break the skin on top to expose uncooked egg and return to oven. Check every 2-3 minutes until all egg bites are set. Once they’re completely set, remove and enjoy, preferably with some good coffee that you also didn’t overpay for.