Everything You Need To Know About Spotify’s Latest Changes

Recently, Spotify updated its interface, burying its “Repeat” button in the depths of a sub-menu on its mobile app — and people are pissed. Redditors and Twitter users alike have taken to the internet to voice their complaints.

“I’ve paid for premium for years now and might stop if this is permanent,” Redditor u/ChummySquash wrote. “Hiding repeat and shuffle is about the worst thing you can do to a music app.”

But how will you ever find the repeat button again? And most importantly, why have you done this to us, Spotify? Here’s what you need to know:

How do I repeat songs now?

It’s not complicated, but it sure is annoying. Instead of repeating a song under the normal “Now playing” screen, you’ll have to press the three dotted button in the upper right-hand corner. From here, you’ll find the “Repeat” option beneath the song and artist playing.

Are there other changes?

They’ve also moved the “Go to queue” option to the same sub-menu. If you want to see what’s coming up on your playlist, you’ll have to find it there. Instead of the repeat option, you’ll also find the “Share” option on both the “Now playing” screen and sub-menu, so you can WhatsApp, Tweet, or Instagram Story your taste in music to concerned friends (and who doesn’t want to know you’re listening to at all times??) 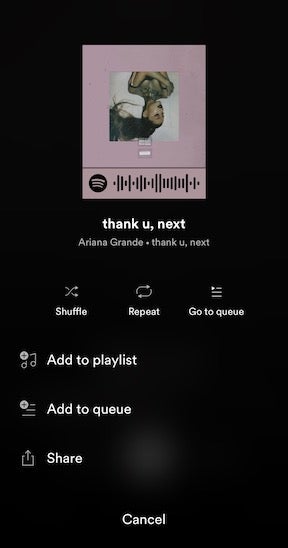 Why are they doing this to me?

Because they can. They’re clearly placing a higher value than ever on sharing your content with friends and family, over the quality of your listening experience. “We are always testing new products and features, nothing to share at the moment,” Spotify told the Verge regarding its changes.

Can I stop it from happening?

No. The changes have already been made. While testing my Spotify app on IOS, the repeat button re-appeared temporarily and then just as quickly disappeared again (which gave me an ounce of hope that they’d reconsidered their decision).

For now, you can upvote a thread in the Spotify Community boards asking to revert the changes.