It’s the Australian dream; home ownership and a decent set of wheels parked out the front. But just as the equation on home ownership has shifted, with housing affordability being smashed, the same is happening with car ownership. The cost of owning a car, even before you start driving it, is pretty high. But new subscription and rental services, that give you access to a car, with the option of swapping out when you’re bored, are emerging. So what’s better, owning a car or having access to one whenever you want?

In answering this question, I looked at two services – CarBar and DriveMyCar. What we are looking at with these services is more like subscribing to access to a car than renting or using a car-share service like Car Next Door and GoGet.

What Does a Car Cost?

Aside from the capital cost of a car there are a bunch of on-costs you can’t avoid such as insurance and registration. Then there’s depreciation – the loss of value as you car gets older – and maintenance. Some of those costs vary from state to state – and even postcode to postcode. When I moved house and told my insurance company at the time, my monthly insurance premium went down by a few dollars each month.

With maintenance, it’s worth noting that as well as well regular servicing there are items that hit you periodically such as tyres and, depending on the vehicle, things like timing belts which make for a very expensive service every few years – if you keep the car that long.

According to Canstar, you can expect the following costs if you own a car in Victoria.

DriveMyCar provided three different scenarios on new cars – a Peugeot 208 as a small car, a Peugeot 3008 for the family and a Mercedes A180. 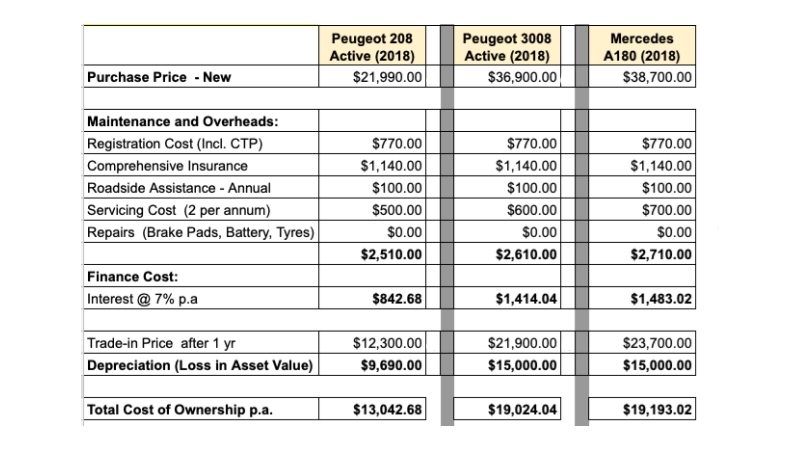 For a 12-month rental, they had the costs at

On the family car, that’s a substantial saving and there’s almost an extra $50 in your wallet each week for the Peugeot 208. But the Mercedes ends up costing you a little more than owning it and financing yourself.

DriveMyCar makes assumptions about the resale value of the vehicle after a year based on the assumption that you’d like to update car each year. And, as they have drop-off and collection points at major airports, if you take off on a work trip or holiday for a couple of weeks or more, you can leave the car there. During that time, you won’t be charged rent on the vehicle but it might be used by someone else.

Carbar’s CarBar+ service lets you rent cars with no fixed terms. All you need to do is give two weeks’s notice when you’re done. Their focus is on older vehicles but have a wide range of luxury cars available.

A look at carsales.com.au suggested that, for the Fiesta, I could buy a similar vehicle for that price. But then I’d have insurance, registration and maintenance to add. So the Carbar+ option isn’t too bad after the first year. And then you can swap to a different vehicle if you get bored.

These new services throw up an interesting possibility. Instead of buying a car and being stuck with it for a few years at a time, you can swap vehicles each year and swap to a more expensive monthly charge or cheaper one as your circumstances change. It also means you can have a small car now but, if you change the composition of your family, you can switch vehicles without the hassle of trading-in, selling on the private market and dealing with car-yards.

If you’re financing a vehicle from new then the rental or subscription system looks pretty appealing. All the financing is covered as are maintenance fees, registration and insurance. That makes life easy and reduces the admin headaches of organising all those things.

It also means that instead of outlaying your own capital, if you plan to pay for a car out of your pocket, you can hold you cash and pay for the car as you go.

The question then becomes one of doing your sums. Aside from petrol, what are the operating costs for your car? In many cases, but not all, the maths stacks up with the rental/subscription option.