Save Gmail Attachments To Your Dropbox With This Add-On

All browsers: Google and Dropbox are now collaborating on a brand-new “Dropbox add-on for Gmail”, which will make it easy to share the contents of your Dropbox directly within Gmail. If you’re going the other way, it’s also a lot easier to dump files directly into your Dropbox, saving you the step of having to pull up your Downloads folder and manually drag the file over yourself.

Dropbox’s Chrome extension does the same things — more than this add-on does right now, as I’ll describe in a bit — but installing the add-on means that you’ll be able to access these features from any browser you want, as well as the Android Gmail app right now and iOS Gmail app at some future point.

To install the Dropbox add-on, head on over to the G Suite Marketplace — ignore the fact that it’s named for Google’s paid-for service — and click the giant “Install” button on the Dropbox for Gmail add-on. Accept all the permissions the add-on requests and it’ll only take a few seconds to link up to your Gmail account.

Pull up Gmail and… nothing looks different. You were probably expecting to see some kind of Dropbox icon on the right side of the screen, under the Calendar, Keep and Tasks buttons — new additions as part of the Gmail redesign. I was, too.

And it’s the lack of this icon that’s causing a number of those who have installed the add-on to assume that something is wrong: that the installation didn’t finish, or that the add-on is somehow broken.

That’s not quite the case. The add-on is there, it’s just not going to do everything Dropbox teased in its announcement just yet.

Right now, you’ll see a Dropbox icon appear in that aforementioned spot if you pull up an email with attachments. Click it, sign into your Dropbox account (if you haven’t yet done so) and you’ll be able to click on attachments and save them to any of your current Dropbox folders. 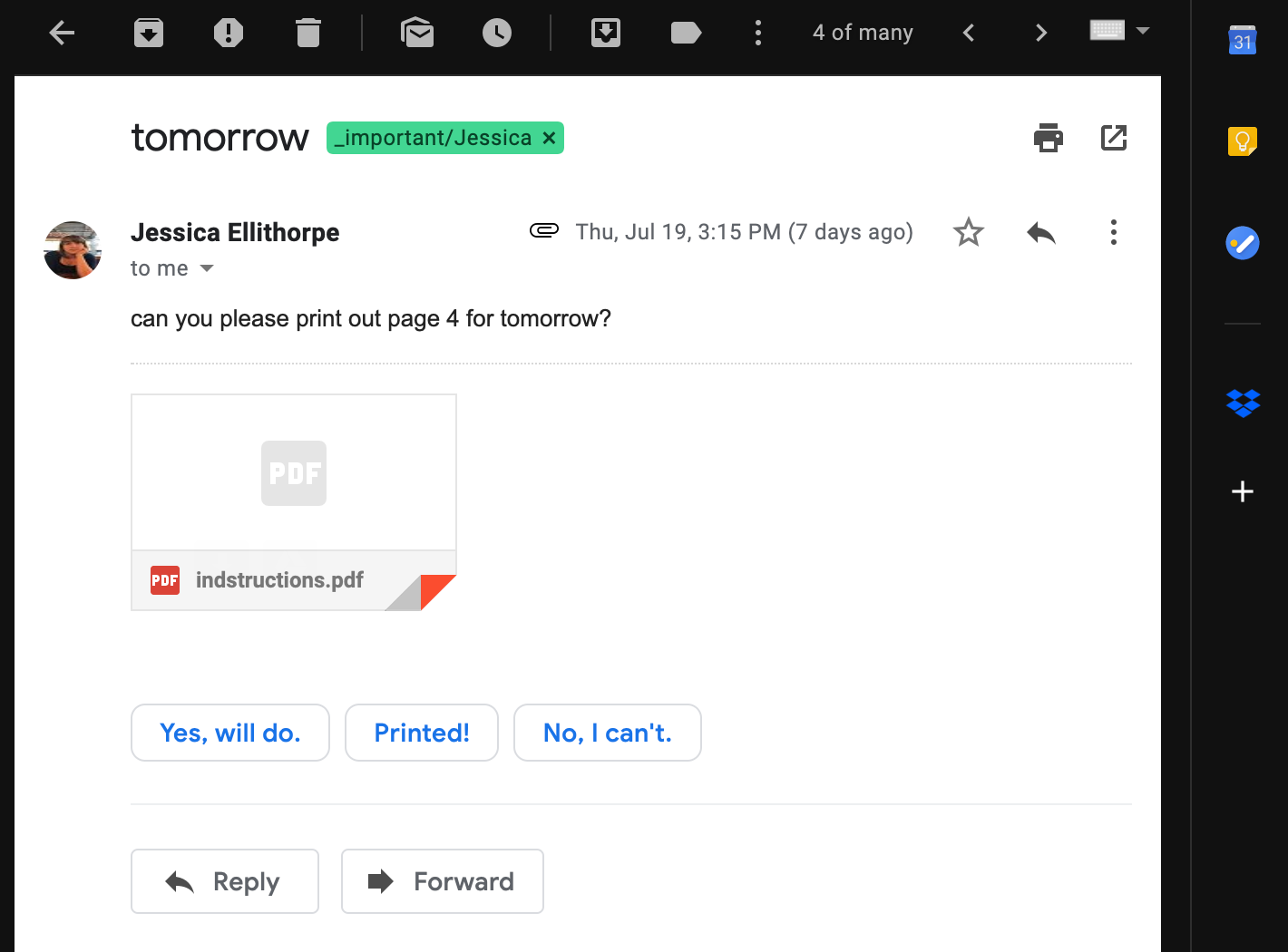 You can’t create new folders for files via the add-on, but you can click on the three-dot icon at the top of the sidebar to jump to the web-based version of your Dropbox, if you need to do a little more organising.

And that’s it. According to Dropbox, the other half of the add-on — the part about making it easier to share your Dropbox-hosted files to others — will arrive “later this year”. It’s a useful feature, as you’ll be able to link directly to files sitting in your Dropbox instead of attaching them to a message, which eats up precious space in your Gmail inbox.

And you’re more likely to keep your Dropbox’s 2GB of free space organised than delete old attachments in your Gmail, right?