How To Prevent Your Maps App From Rerouting You

We all love the convenience of mapping apps, but many of us would prefer that the app stick with a route we know is golden, rather than rerouting us all over the place to save a few minutes in traffic.

I’ve encountered this when there’s a little traffic on the motorway, and my navigation app – Google Maps or Apple Maps, depending on how I’m feeling that day – updates my route to “save me some time” by sending me speeding down the offramp and right up the next onramp, back onto the highway.

It seems like an arsehole move to me, but mapping apps care not for your simple human feelings, only the speed of your vehicle.

Neither Google Maps nor Apple Maps come with a “don’t reroute me” button, which is kind of annoying. I don’t think it would be that hard for either service to implement the feature and bury the option in a settings menu somewhere, and it could be a real perk to drivers who just want to stay the course on their original routes.

Absent of that, the only real suggestions I’ve seen that might work to prevent automatic rerouting involves flipping your device to aeroplane mode. However, then you’ll miss out on things such as text and calls. You also won’t be able to stream music or podcasts for your long road trip. (Here’s hoping you downloaded everything in advance.)

Instead, on iOS, try going to Settings > Maps (or scrolling down more to find the name of the mapping app you use) and turn off Mobile Data. That will at least prevent the app from receiving traffic updates and rerouting you if it thinks it can find a faster way to get to where you’re going. 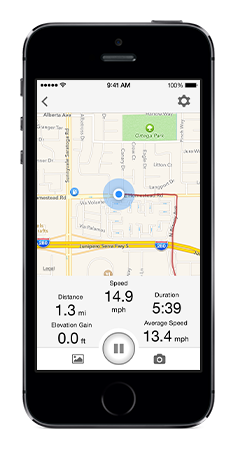 On Android, you can prevent apps from using background data, but that won’t help you out if your mapping app is front and centre on your device. Instead, check out an app such as NetGuard, which allows you to block all mobile access for specific apps.

On Google Maps, you can also turn on “Wi-Fi Only” mode within the app itself, which should prevent traffic rerouting, but make sure you’ve downloaded an offline map of your route first.

I’ve also seen some users suggest a different mapping app entirely – Ride with GPS (iOS and Android). Though it will set you back $79.99 an annual subscription to its “Basic” mode, which gives you turn-by-turn navigation, the app will at least let you plan routes without suggesting “helpful” alternatives mid-trip.

I haven’t personally used it, but inRoute Route Planner (iOS) – $45.99 for an annual subscription – lets you plot out your trips in advance and find all kinds of places to stop along the way.

For a free alternative, Android users might want to check out the offline mapping app MapFactor Navigator, which should also prevent annoying suggested reroutes.

On iOS, Maps.me offers pretty good offline navigation – with turn-by-turn directions – without any annoying in-app purchases or advertising to distract you.