How To Make A Juicy Lucy With Any Cheese

cheesecookingfoodjucy lucyjuicy lucymelting saltsskillet
To sign up for our daily newsletter covering the latest news, hacks and reviews, head HERE. For a running feed of all our stories, follow us on Twitter HERE. Or you can bookmark the Lifehacker Australia homepage to visit whenever you need a fix.

There are burgers, and then there are burger-themed projects, and the Jucy Lucy — AKA Juicy Lucy or Juicy Luicy (which is how I spell it) — is quite the delicious project. Rather than melt the cheese on top of the burger patty, this meaty wonder holds a treasure trove of melted freedom cheese on the inside.

This burger is a messy bitch that lives for drama, and she is almost without flaw. The only criticism I can ever imagine anyone levelling at Lucy is that she can only be filled with burger cheese, as other cheeses grease out and separate when you try to transform them into a molten core.

Actually, that criticism isn’t even valid, as I have a found a way to turn any cheese, even the prone-to-greasing cheddar, into a gooey, molten mess.

You may recall me talking about the power of melting salts — such as sodium citrate — when I made a whole bunch of cheeses into a whole bunch of cheese sauces. If you need a refresher (or introduction) they basically act as an emulsifier in acidic cheeses, increasing the pH and making the proteins more soluble. This, in turn, prevents them from separating into a gloppy, greased-out mess. 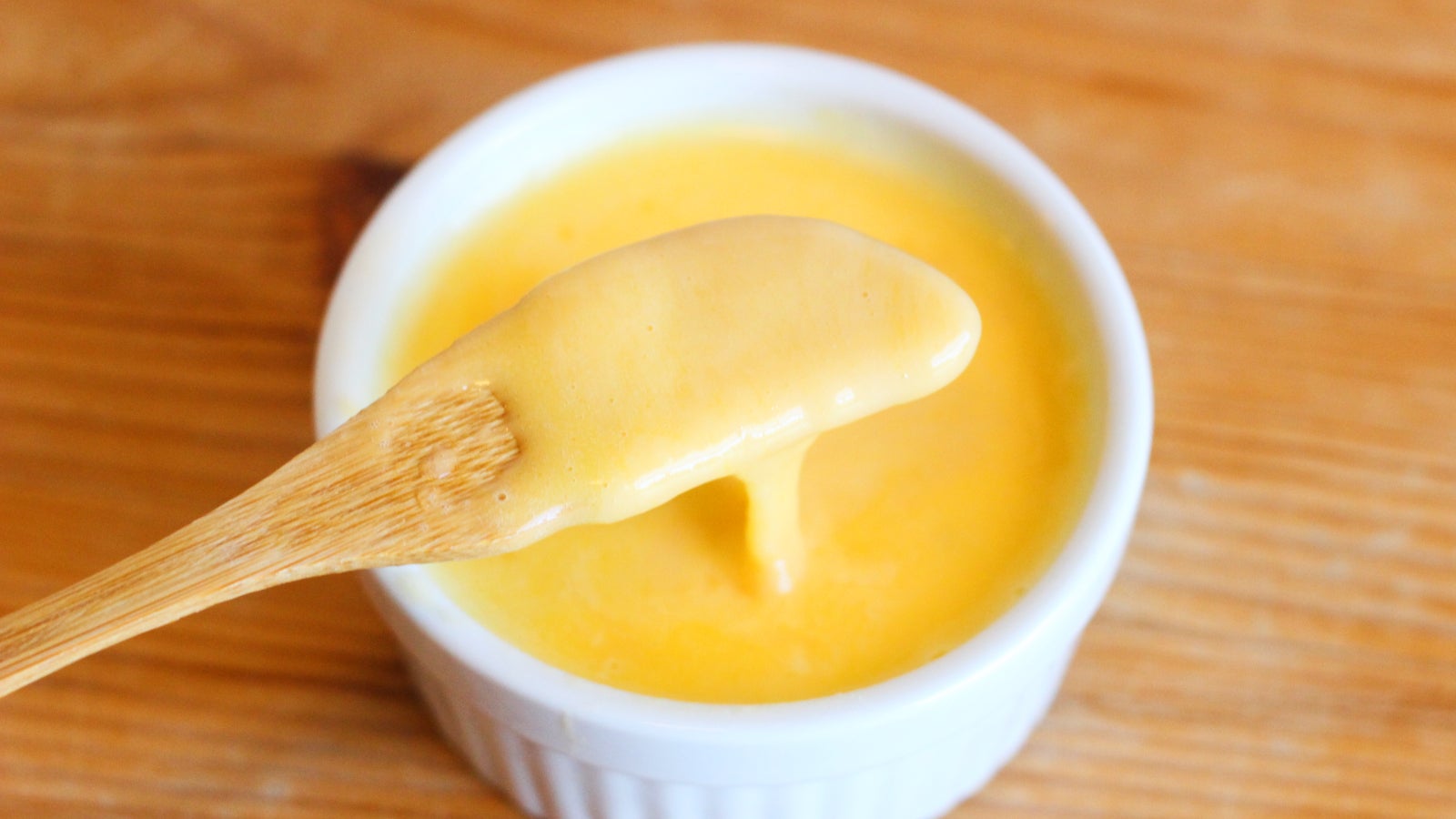 This is cheddar. (Photo: Claire Lower)

By adding a bit of sodium citrate to a pile of shredded cheddar (along with a little bit of beer), I was able to make the stringy, gooey cheese sauce you see above.

I then took that sauce, chilled it until it was scoopable, and sandwiched it in between two 85g portions of minced beef, before chilling the whole thing one more time to help keep it together during cooking.

A little reverse sear action gives us a medium-rare patty filled with melted cheese which, in turn, should fill you — and your belly — with happiness.

To make your own, you will need:

Pour your beer and 1/8 teaspoon of sodium citrate into a small sauce pan and bring it to a simmer. Stir in shredded cheese, adding more of the melting salt as needed to get it to the consistency you see in the photo above. Pour your cheese sauce into a ramekin, and set it in the fridge for half an hour, or overnight. (If you’re using burger cheese, you can skip this whole paragraph.)

Take 170g of minced beef and separate it into two 85g patties. Flatten them out so each is about 1cm thick, season the outside of each patty liberally with salt, and scoop your chilled cheese sauce (or folded burger slice if you prefer) into the centre of one patty. Place the second on top, and crimp the edges firmly with your fingers all the way around. Put the burger in the freezer for 15 minutes, and preheat your oven to 93C.

Place the chilled burger on a wire rack on top of a baking tray, and cook for half an hour for medium rare. You won’t, unfortunately, be able to check the internal temperature of the meat, as doing do would release the cheese, but the meat should turn a deep, dull red and the fat should begin to render out.

During the last five minutes in the oven, pour a drizzle of vegetable oil into a stainless steel or cast iron pan and rub it around with a paper towel to coat. Heat the pan over high heat until it just begins to smoke, then cook the patty for a minute and a half on each side to from a crust. 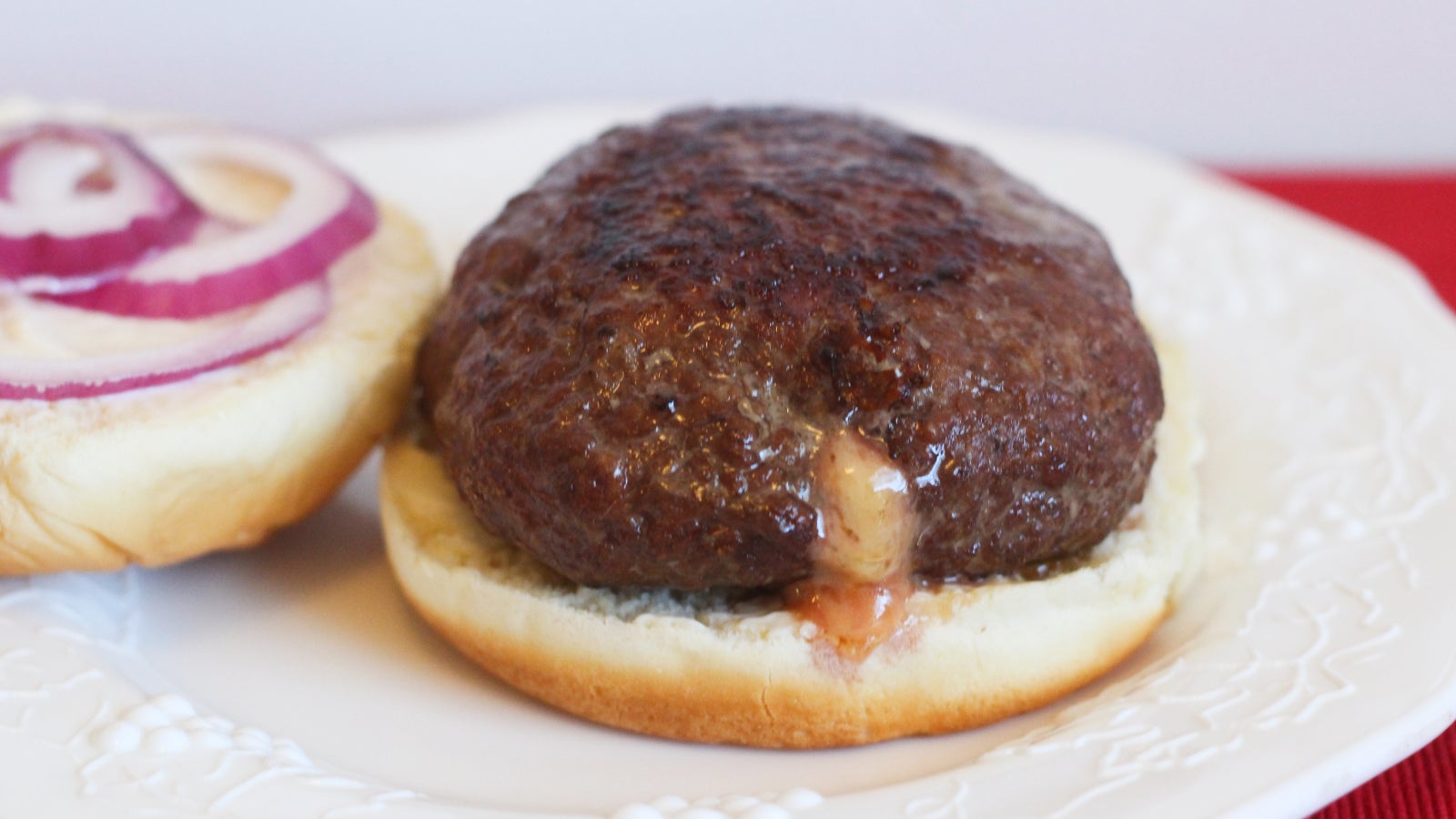 Let the whole thing rest for five minutes, so as to prevent burning your mouth beyond recognition, then place on a nice soft bun and top with your favourite burger toppings.