The Biggest Wastes Of Time We Regret When We Get Older 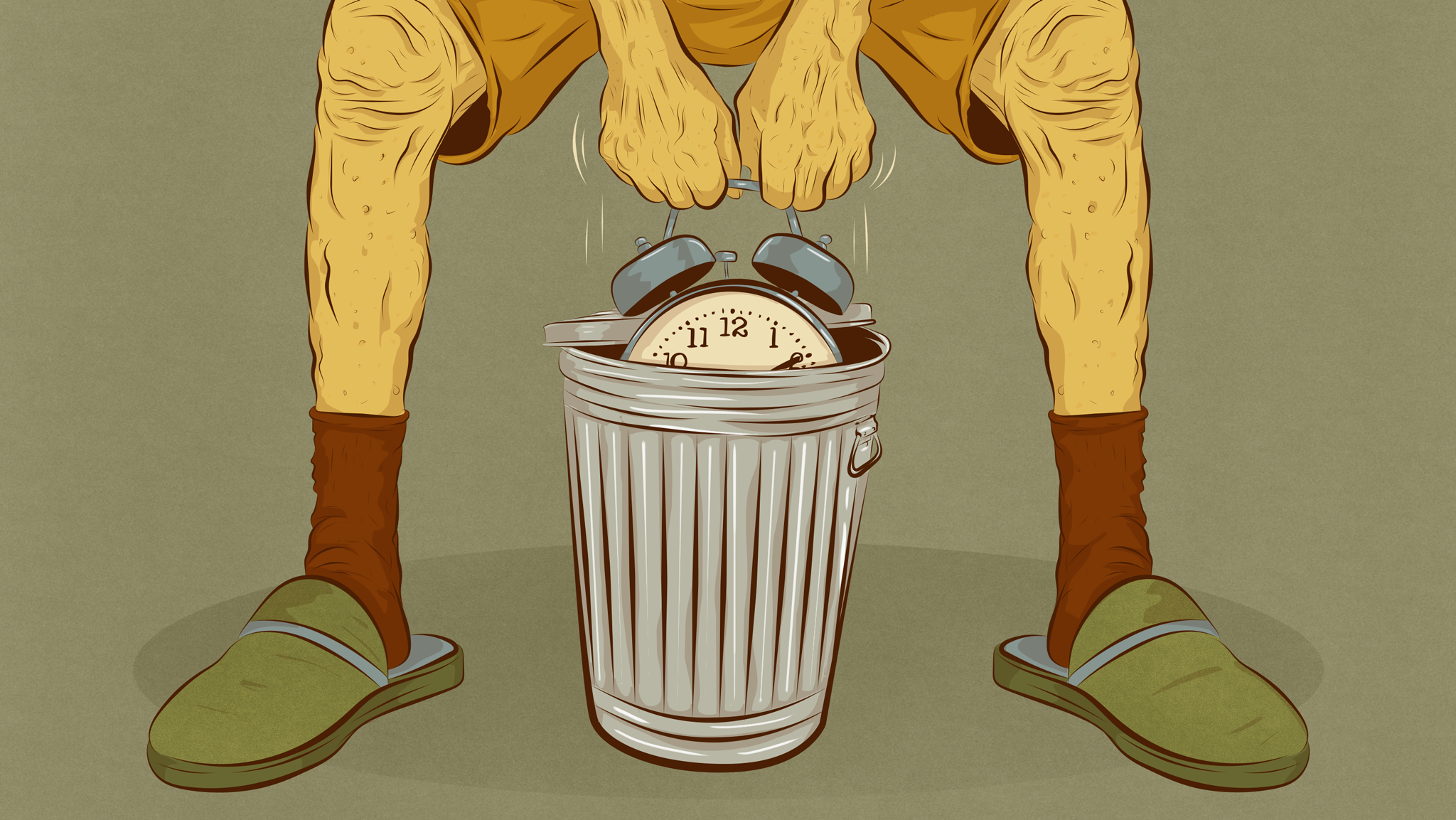 We spend a lot of energy looking for shortcuts to save time, and sure, those shortcuts add up. But when I look back, my biggest time regrets aren't spending too much time on Twitter or mismanaging my daily tasks. Those are bad habits, but there are bigger, more systematic time wasters that have really gotten in the way. Fixing these will free up a massive amount of time and energy. Illustration by: Sam Woolley

Not Asking for Help

My first week on my first job out of university, my boss handed me a huge spreadsheet. He told me to organise it in a way that made zero sense to me. Being a quiet, timid person, I simply nodded, walked back to my desk and stared at that spreadsheet for like an hour, hoping to make some sense of it (yep, just like George Costanza and the Penske file).

Finally, my coworker came in, and I confessed I had no idea what to do. He broke it down for me, then dropped some advice that's stuck with me ever since: "You might feel dumb asking questions, but you look dumber when you don't get it because you failed to ask."

It was harsh, but true. And not only did I look like an arse, I could've also saved a fair amount of time that day by simply asking my boss what he meant. It made me wonder how much time I'd wasted by not asking for help over the years. As dumb as you might feel asking questions, it's the fastest way to get an answer.

Similarly, asking for help is a great way to, well, get help. This is why networking and finding a mentor are hugely valuable. If you feel stuck in your career or need to learn new skills and have no idea how to get started, talking to other people in your field will go a long way. Even if it's just shooting someone a short email, asking for help is like a shortcut for your career. Try Leo Widrich's formula for asking for help via email:

2-3 sentences of honest appreciation. There is a reason you are asking someone for help. They have a lot of experience in that field, worked on a startup/idea related to what you are working on or else. If you do this, it shows them you have thought about why picking them out to ask for help.

1 sentence that states a single, focused question people can give you an answer to. Here is one that worked very well when I asked Noah:

"What was the single, most valuable user acquisition strategy for Mint after you hit 100K users?"

Here's another way to look at it: if you're not asking for help, you're probably not challenging yourself enough. If you have all the answers, you're not learning new skills, trying new things or moving forward and out of your comfort zone. There are a handful of reasons we don't ask for help, but it's usually because we're too proud or scared, and that's a huge waste of time, because it keeps you from moving forward.

Relationships require maintenance, but there's a difference between maintaining a good relationship and trying to force a bad one that doesn't make much sense to begin with.

There's a lot of emotion in romance and friendships, so sometimes it's hard to tell when you should keep trying or you should just call it quits. Like a lot of people, I made some common bad decisions that wasted both my time and the time of the person I was with. For example:

There are good reasons for wanting to make a relationship work, but those aren't good ones. They cloud your judgment, prolong your unhappiness and distract you from things that matter to you most. At the same time, it's hard to say all bad relationships are a total waste of time, because you learn a lot about yourself from them. That's a valid silver lining, but still, the sooner you learn those lessons, the better.

Similarly, not dealing with the emotional impact of a breakup is also a big waste of time. When a relationship ends, we usually go through the typical stages of grief associated with loss. It's easy to get comfortable with denial and convince ourselves we don't really care and we're fine. In reality, ignoring the pain only prolongs it. Our work suffers; the rest of our relationships suffer.

Dwelling on Your Mistakes and Shortcomings

Learning from your mistakes is one thing. Dwelling on them wastes your time, diminishes your confidence, and keeps you from getting on with your life.

Dwelling also makes you more apt to repeat your mistakes. In a recent study published in the Journal of Consumer Psychology, researchers asked subjects to spend money during an imaginary trip to the mall. Before "shopping", some subjects were asked to recall a past financial mistake. They found those subjects were more likely to incur debt. A press release for the study concluded:

Perhaps the most surprising, Haws said, is that searching through the past can negatively affect behaviour, depending on the ease of recall, even when past examples are positive...Instead of dwelling on the past, Haws said, her research into behaviour suggests that setting goals for the future can positively change present behaviour...In short, if we want to have better self-control, "Look forward," Haws says. "Don't look back."

When you think about your own experiences, it probably makes sense. Dwelling makes you feel like a failure. When I feel like a failure, it's easy to tell myself there's no point in trying, because I already suck. (Hence, getting further into debt when you already feel like an overspender.)

Of course, you don't want to skip over your mistakes and ignore them either. The goal is to glean something from them, then release the failure. I like Emilie Wapnick's process for doing this:

In order to let the past go, you must forgive yourself officially.

Feel the embarrassment or shame one final time. Really feel it throughout your body. Next, tell yourself that everyone makes mistakes and you know you that that outcome was not your intention. It was an accident. Finally, make the decision to forgive yourself and do it. It helps to even say it out loud.

From now on, it's OK. You are forgiven.

Every time the thought comes back, simply remind yourself that you have already been forgiven, so there's no reason to feel bad anymore. Then push the thought away.

One of my other big time regrets is not allowing myself to fail out of fear of my own shortcomings.

For years, I stayed in a comfortable place and didn't try to do things I wanted to do. I wanted to travel after high school, but I went to university close to home instead, because I was too shy to meet new people, and I was afraid I couldn't make it in another city. After university, I wanted to be a freelance writer, but I decided to find a more stable, accessible job instead, because that was easier. There's nothing wrong with wanting to live a stable, comfortable life, but I was doing it for the wrong reasons: because I was afraid to fail.

Eventually, I got tired of this. I decided to find work I actually enjoyed, travel more and live somewhere else. I made a ton of mistakes along the way, and even when I did succeed, I felt like an imposter. Still, I think the bigger mistake was not trying sooner. Even if I failed, I would have learned from my mistakes much sooner.

Worrying Too Much About Other People

It's easy to waste time worrying about other people, too. Don't get me wrong — your friends and loved ones mean a lot to you, and you want to spend time nurturing them. But we also spend a lot of time fretting over problems that don't matter in the long run.

For example, I spent years getting annoyed with people who undermine me. I complained about them, tried to understand them, wondered what was wrong with me that I inspired that kind of behaviour. Those habits always lead to a dead end, because they didn't involve action. The older I got, the less tolerant I became of this behaviour, and I learned to nip it in the bud.

I also indulged another time wasting emotion: jealousy. I compared myself to everyone, wanted what they had, and felt inadequate. Like most negative, destructive feelings, the first (and biggest) step to overcoming it is understanding it.

I paid attention to my jealousy and what triggered it, then learned that it was less about the other person and more about my own feelings of inadequacy. In short, I embraced that jealousy. Envy is a bit different, but it often comes from the same place, and here's what writer Trent Hamm suggests in dealing with your envy:

The question is, why do you want it in your life? I like to use the "five whys" when handling a question like this. Whenever I'm trying to answer a "why" question, I repeat it five times, asking it of the answer I come up with for each question. When you identify a particular strong desire that you have, step back for a moment and break it down into small pieces. Then, see if there isn't a way for you to address those smaller pieces in your own life. Again, let's take that international trip. What elements am I desiring when it comes to that trip? I want to expose my children to different cultures…. The thing is, when I start breaking that trip down into small pieces, I start seeing pieces that I can easily incorporate into my own life.

Once you understand why you feel jealous or envious, you can take action to take care of the problem, whether that means processing the emotions or coming up with goals for yourself. Either way, that's a lot more productive.

Most of us are probably guilty of all of these at some point, and really, they're human nature. Regret is another big waste of time, so there's no point in beating yourself up over these. The sooner you learn from them, though, the sooner you can free up your time and energy to live the life you want.

This story has been updated from its original publication.