Why Dogecoin Is The Cryptocurrency To Watch In 2018

How can you find the next crypto to go ‘to the moon’. Recently, finder.com.au enlisted nine panellists to help predict just where twelve of the biggest cryptocurrencies may head in 2018 and, interestingly, Dogecoin is predicted to be one of the biggest movers.

As part of their March cryptocurrency predictions, finder.com.au had nine panellists associated with blockchain technology and cryptocurrency space give their predictions on everything from Bitcoin to Cardano and Iota.

Surprisingly, Dogecoin – the crypto based on the Shiba Inu meme that provides much wow – has been predicted to rise almost 3000% by the end of the year, going from its price of $0.0077 on February 27 to as much as $0.24. That’s a huge jump for a cryptocurrency that started as a joke.

To be fair, most of that staggering prediction comes from Axes and Eggs Samson Williams who expects the coin could rise to around 95 cents by the end of the year. Other panellists weren’t so sure about the prediction, expecting the coin to rise slightly or stay flat.

Interestingly, it is the strength and the loyalty of the community behind Dogecoin that has inspired such lofty predictions with both Williams and WishKnish CEO Alisa Gus. Other panellists finder.com.au talked to believe that Dogecoin is still regarded as a little bit of a joke, so they can’t see it doing too much in the future.

Perhaps scarily, Dogecoin has actually dropped to $0.0058 since the panellist’s predictions came out on February 27, which shows two things: Volatility and, oh yeah, how volatile the market is. 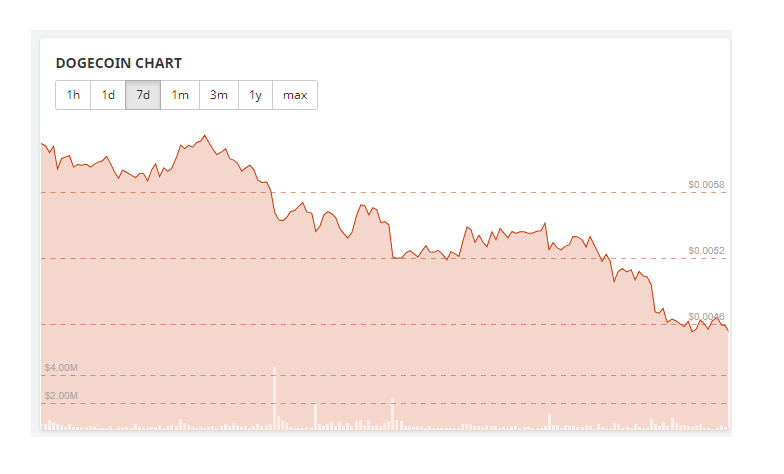 Dogecoin hasn’t had a great week – but does that mean it can’t rise 12,000 percent YoY?

What does that mean? Should you be looking to put money into Dogecoin in 2018?

I still find it hard, personally, to convince myself to put any real money into the currency. I think it will subsist for a long time due to the culture around memes and the community that it has built – many Dogecoin holders are parochial about its future as a cryptocurrency – but I don’t think it can truly survive, especially considering its origins. Once more legitimate, expertly-designed cryptocurrencies begin to take hold (I’m talking way down the track), we may see the end of ‘much wow’ and the Shiba Inu.

For now though, you can go to the moon!