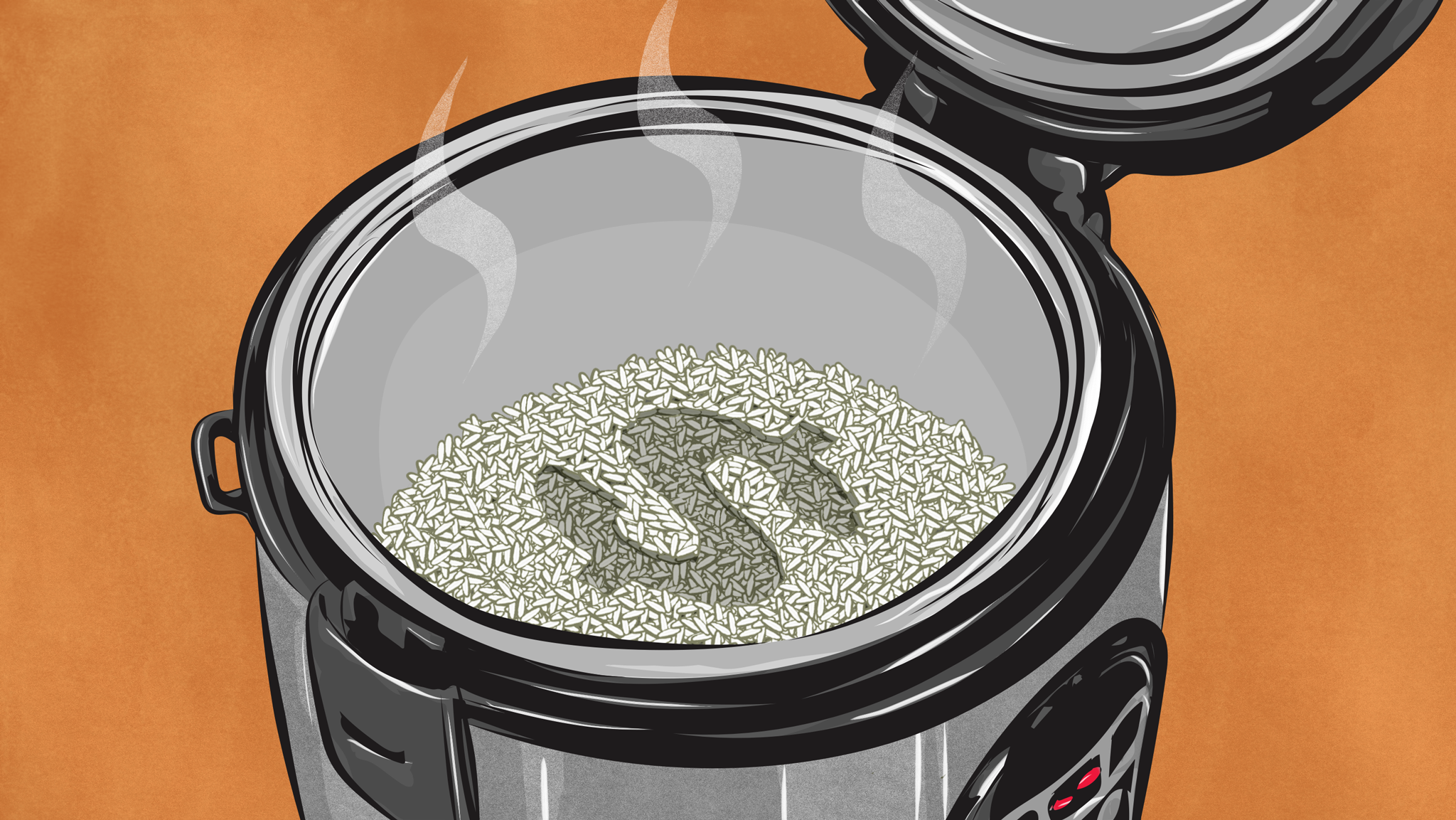 I grew up with a standard, cheap rice cooker that my mum bought at a grocery store. Shopping for my own cooker as an adult, I was surprised at how many options there are to choose from and how expensive those options can be. Cooking rice is a pretty straightforward task, so what's with the super expensive cookers? Here's what I found.

Why You Even Need a Rice Cooker

Growing up, we never cooked rice on the stove, and embarrassingly, I didn't even know how to do it until recently. Cooking rice on the stove isn't exactly difficult, but I have screwed it up a few times. I've burnt it. I've made it too mushy. A rice cooker, on the other hand, cooks perfect rice every time. All you do is add rice, measure water and press start.

A basic rice cooker has a built-in thermostat that tracks the temperature of the pot. The water starts to boil and steam, and once the thermostat hits a certain temperature, the heat is reduced and the device shuts itself off (or switches to "Warm" mode).

The fact that I didn't know how to cook rice on a stove for years is a testament to how effective a rice cooker actually is (as well as how lazy of a cook I am). If you make a lot of rice and want to save some time and effort, that's a good enough reason to get one, and even a cheapie will do the job. You can also make all sorts of other fun foods in a rice cooker, so it's hardly a unitasker.

Two words separate the $20 rice cookers from the $200 ones: Fuzzy logic.

Fuzzy logic rice cookers have fancy automatic technology that cooks your rice with a little more nuance. The fuzzy logic theory was introduced by UC Berkeley professor Lotfi Zadeh in 1965. The New York Times explains how it works in terms of technology:

"Fuzzy logic" is a way of describing situations that cannot be described in absolutes: yes or no, true or false, white rice or brown. Fuzzy logic is used in automated technology that must sense and adjust for various factors, like mixing cement (depends on humidity) and changing traffic lights (depends on traffic). In rice cookers, fuzzy logic can take into account the type of grain, its age and hardness and its desired consistency. Frequent rice cooks who work with a variety of grains and have room on the countertop will not be disappointed by the performance of these machines.

In other words, these $200 machines are equipped with the technology to cook rice that's optimised for sushi and porridge. It can also adjust the cooking for different kinds of rice. The device's microchip adjusts the cooking times and temperatures accordingly.

For example, here's the product description for a popular brand in the US, the Zojirushi:

This 5-1/2-cup rice cooker and warmer makes 10 cups of cooked rice and includes a variety of cooking functions comprising of white (regular/sushi, softer or harder), mixed rice, porridge, sweet, semi-brown, brown, rinse-free, and quick cooking. This unit uses a black thick spherical pan with stay cool side handles that provides even heating for better cooking. There is a programmable melody or beep audio indicator to indicate when the cooking cycle has ended.

It's sort of like a cheap electric hand mixer versus a fancy stand mixer. They both mix stuff, but the stand mixer will do a hell of a lot more. Of course, there are varying levels of quality of stand mixers just like there are rice cookers.

Our own editor-in-chief, Alan Henry, owns one of these and stands by it.

The promises are real. Put medium grain jasmine or basmati rice in it versus short grain sushi rice and it cooks both perfectly without me really having to do anything different aside from measuring the water.

In fact, the machine also makes up for any human error:

Maybe I short the water or add more water, thinking I can alter the consistency on my own. Nope, the machine is smarter than I am, and adjusts temperature accordingly and produces consistent rice. OK, but maybe I want to make congee or rice porridge or something. Well, there's a button on the front for that.

If you make different kinds of rice, grain or oats frequently, a quality, more expensive model will make your job a lot easier.

Picking the Right Cooker for the Job

Whichever route you go, you have to pick the right size machine for the job. Here's a basic size guideline:

If you're a small household — it's just you and maybe a significant other — you'll probably just want a small. If you have a family or you make big batches at once, you may want a medium. Of course, it depends on your own individual needs, but these sizes are a basic guideline. Beyond size, there are a few basic features that even a cheap model should have:

Most will also come with a steamer so you can steam vegetables, too, as well as a serving paddle and a cookbook. Fancy, fuzzy logic rice cookers should come equipped with an audible timer, different settings for rice and grains and, of course, they should be easy to use: Just a hit a button and you're done. Most of them also come with an extended "keep warm" feature that keeps the rice heated for over 12 hours.

Some fuzzy logic rice cookers will come with even more features, making them even more expensive: A reheating cycle, a higher cup capacity, brown rice settings and so on. Just like anything else, those features are only worth it if you're going to use them, and they can turn an already expensive $200 model into a more-expensive $300 one.

There are also brands to consider. The Zojirushi seems to be to rice cookers what the KitchenAid is to stand mixers: it's the most sought-after brand in the US because it does the job well, but there are cheaper alternatives, especially for those who don't want to pay to import their rice cooker. Panasonic also make fuzzy logic rice cookers, and while their ratings aren't as high as the Zojirushi, they're cheaper.

There are in-between options, too. For example, Cooks Illustrated put an array of different models and brands to the test and the Aroma was their top pick. It doesn't come with quite as many features as the Zojirushi, but it has options for brown rice, white rice and steam. It isn't available in Australia (unless you want to pay for it to be shipped here), but it gives you an idea of your options, like the Breville Rice Box, which makes crispy rice, congee and sushi as well as standard rice.

And here's one thing to keep in mind with Japanese rice cookers: A traditional Japanese-style measuring cup is equal to 3/4 of a Australian cup. So make sure to adjust accordingly, or better yet, for traditional rice, use the first knuckle method.